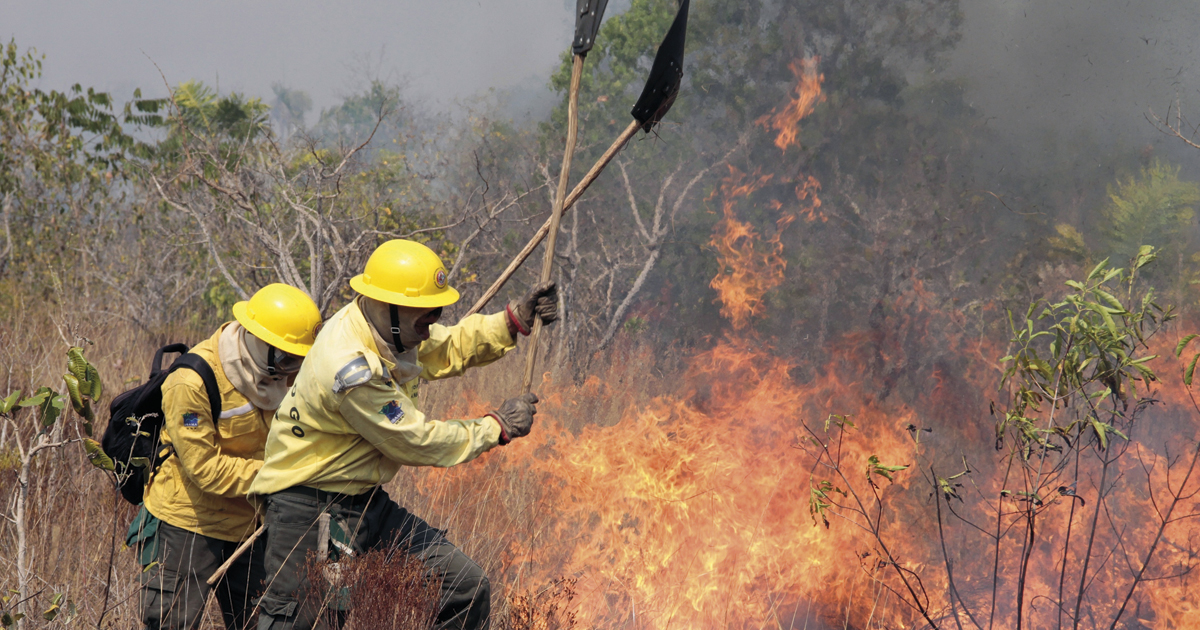 Firefighting in the Xingu Indigenous Park in 2016

The Brazilian National Institute for Space Research (INPE) has expanded its system for disseminating and analyzing forest fire data after completing its modernization process in December 2017. The database, available on the agency’s website, offers new features, such as instantly generated maps that show where fires have occurred across the country in the last 20 years. It has also been integrated with Google Maps, providing a precise indication of when a fire reaches a forest or agricultural area. “The rapid evolution of geographic data systems and the internet means the agency has to update its mechanisms for processing and disseminating satellite images every five years,” explains engineer Alberto Setzer, coordinator of the INPE Forest Fire Program.

Another recently launched service is the TerraMA2Q platform, which adapts fire-monitoring data to the needs of each user. “The software gives municipal and state officials more autonomy in monitoring the occurrence of irregular fires,” says Setzer. TerraMA2Q offers real-time regional updates on fires by integrating satellite data with meteorological information and the locations of firefighters. These projects were funded by the UK Department for Environment, Food, and Rural Affairs, which provided US$1.53 million to the INPE via the World Bank.

The TerraMA2Q platform has been adopted by the state environmental departments of Acre, Tocantins, and Piauí. The tool can be used to overlay data generated by the INPE and state public agencies, says Maria Amélia Maciel, manager of environmental information and intelligence at the Tocantins Environment and Water Resources Department. “Various research institutions based in Tocantins collect local data, which was not previously monitored by the department,” says Maciel. This regional information, she explains, is often more detailed and relates to variations in temperature and humidity. “We can enter this local data into the new platform, thereby obtaining a more detailed picture of the effects of the fires.” Maciel says the new software makes it possible to more accurately identify what is known as the “fire scar,” which helps to measure a fire’s impact on biodiversity and vegetation.

The INPE offers training for state employees who use their monitoring tools. Vera Reis, technical director of the Climate Change Institute at the Acre Environment Department, says that the TerraMA2Q platform provides more resources to help develop strategies to combat and prevent irregular fires. “Before using this system, the department only had access to data on hot spots from the INPE website. We would manually create a spatial distribution of the fires on the map,” she says. “We were able to estimate the fire risk in the region by combining meteorological data with drought and rainfall indicators. This also allows us to assess flood risks.”

The INPE has provided regional fire data since 1998, but until now, access was limited. Among the main bodies interested in this information are those responsible for monitoring and fighting forest fires, such as the Brazilian Federal Environment and Renewable Resources Agency (IBAMA), as well as state authorities. Operation Corta Fogo was started by the São Paulo state government in 2011 and uses INPE data to help the Environmental Military Police monitor the unlawful use of fire in agricultural areas and forests. Last year, the state imposed fines worth a total of more than R$25 million.

The INPE receives around 250 images a day from 10 foreign satellites, some of which are geostationary, such as GOES-16, which orbits the Earth at a distance of 36,000 kilometers (km), while other polar satellites are just 850 km from the planet’s surface. Because they are farther away, geostationary satellites usually produce images with a lower resolution, of 2 km. The advantage is that they send images every 15 minutes and can detect large fires, such as forest fires that have spread over tens of kilometers.

The INPE has highlighted that forest fires have become more common in Brazil in recent years. In 2017, the agency registered a record number of more than 200,000 fires around the country, with most concentrated in the Amazon. The figure is similar to other recent years that have seen a high number of incidences, such as 2015 and 2012. As well as climate change, which has created drier conditions that help fires to spread, the increased number is explained primarily by human activity, such as the burning of crop residue to prepare land for new planting. This agricultural technique, traditionally used by subsistence farmers, is a major cause of forest fires—when not properly controlled, the fire can spread to nearby natural vegetation. Another example is the burning of felled trees during deforestation.

Luiz Aragão, a researcher from the INPE Remote Sensing Division, explains that if the fire progresses through the forest floor and the tree canopy is very dense, the thermal sensors on some satellites may not detect the heat. A study published by Aragão and researchers from the US in the journal Nature Communications in February showed that between 2003 and 2015, Brazil reduced greenhouse gas emissions from the burning of agricultural areas by more than 70%. In the same period, however, there was a 30% increase in pollutants released by fires spreading to forests from deforested areas. “This shows that Brazil’s new policies against deforestation are not enough to combat the effects of fire,” says Aragão.

The researchers analyzed data from the Terra and Aqua satellites, which are part of the Earth Observation System (EOS) run by US space agency NASA. Both are equipped with a Modis sensor, capable of producing images with a resolution of 250 meters and covering dozens of spectral bands. The main advantage of the Modis is that as well as detecting hot spots by monitoring thermal energy, it can also identify changes in surface vegetation by means of an optical sensor. Fire monitoring usually uses images produced by a sensor’s thermal band, which captures wavelengths capable of identifying the temperature of a certain location. Modis sensors also pick up the thermal emissions produced by industrial activities, like the furnaces used in steel production. “As such, the satellite images always have to be filtered,” Setzer says.