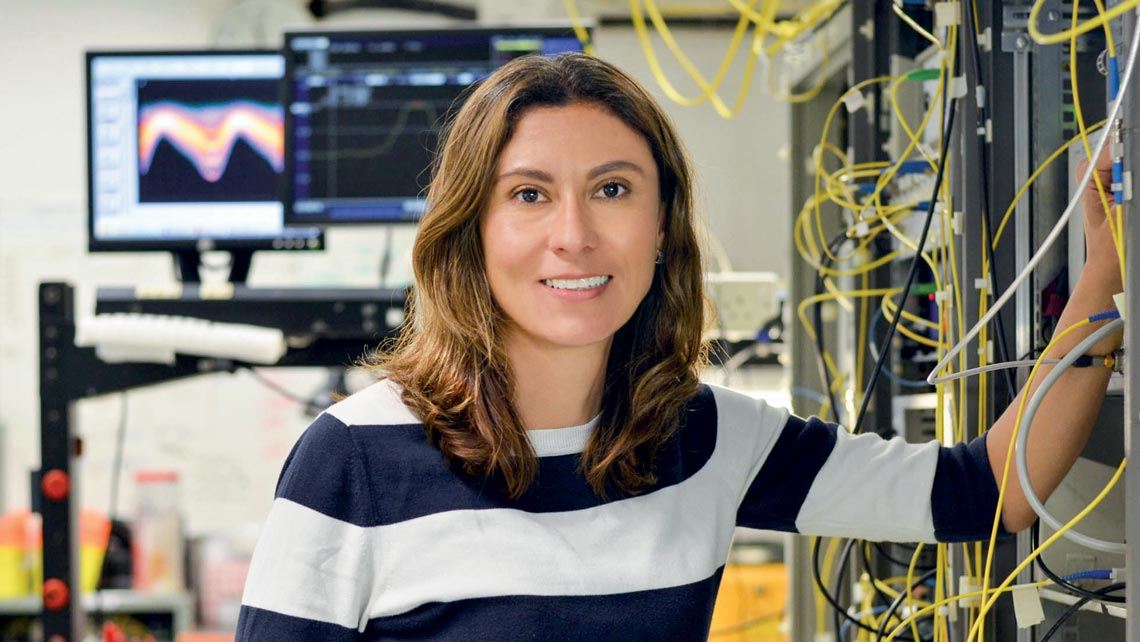 Lidia Galdino in her laboratory at University College London

When Lidia Galdino started her degree in telecommunications engineering at the University of Taubaté (UNITAU) in the year 2000, the internet was in its early days and smartphones didn’t even exist. Two decades later, she has achieved an unprecedented feat in internet speeds: 178 terabits per second—twice as fast as the most powerful connections currently available on the market. A terabit is 1,000 gigabits.

The record was set by a group of optical communications systems researchers led by Galdino at University College London (UCL), UK, where she is also a professor. “As well as looking for ways to increase data transmission via optical fiber, we have also developed technologies that accelerate this process,” says Galdino. In practical terms, the speed achieved would allow a user to download 22 million high-definition photos in less than a second, or to download all of the video content on Netflix in a matter of mere seconds.

Despite the major scale, the engineer explains that the amount of data transmitted by an optical fiber is calculated by a simple equation based on just two parameters: bandwidth and signal-to-noise ratio. “During a voice call, for example, speech is converted into digital data, transmitted over the internet, and then converted back into voice when it arrives at its destination. This transmission over the internet is influenced by noise, degrading the voice quality,” she explains.

The research is using existing fiber optic infrastructure to avoid the need to replace current cables. “It’s like a highway where the cars are the data traveling in different lanes. We managed to double the number of lanes and increase the speed of every car,” she says. In fiber optic cables, information is encoded and transmitted using properties of light. By using different frequencies (colors of light) and modulating the intensity, phase and polarization of the electromagnetic field, it is possible to alter the transmission speed.

Galdino’s interest in engineering arose from a love of mathematics and encouragement from her mother. “I didn’t know much about the different fields of engineering and I ended up choosing to study telecommunications,” recalls the researcher, born in the city of Cristais, Minas Gerais. After taking classes on optical communications, she decided to study the subject as part of her graduate studies. During her master’s degree in electrical engineering, completed at the University of Campinas (UNICAMP) in 2008, she researched optimization of the network transport layer. She completed her PhD at the same institution four years later, during which she studied optical signal converters.

High speeds like those obtained by Galdino are best suited to the infrastructure demands of operators aiming to provide better quality services to a large number of users connecting at the same time, especially with the arrival of the 5G network. “It doesn’t make sense to offer such high speeds to end consumers. But it looks like users will have access to 100 gigabits per second in the not-too-distant future,” she concludes.