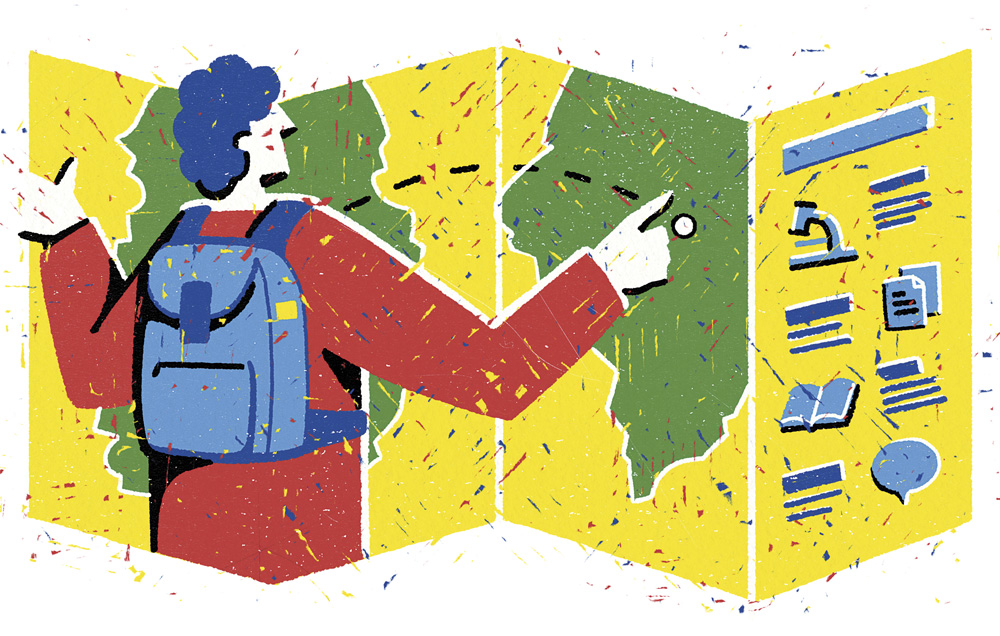 Short-term research internships abroad can help graduate students and young researchers refine their skills by working with high-level international groups. In December, researchers from the United States, the United Arab Emirates, and Colombia published an article in PLOS Computational Biology offering 10 tips for people wanting to make the most of such an experience (see graphic).

The most decisive step is choosing the right university and advisor or supervisor, and according to the paper, there are several ways of verifying the quality of an institution, the accomplishments of its staff, and the infrastructure available in its laboratories. “You can send emails to colleagues who work in the same field, contact internship supervisors, or attend short courses or conferences at institutions of interest,” the article recommends.

Biologist Raul Costa Pereira, who is studying his PhD at the Biosciences Institute of São Paulo State University (UNESP), made a list of about 10 researchers with the aim of identifying the best supervisor for his international research stay. “I contacted dozens of former students who were supervised by those researchers and asked questions about them to help me make my decision,” Pereira says. In the end, he secured a placement in biologist Volker Rudolf’s laboratory at Rice University, USA, where he interned for 10 months in 2016. There, he acquired the skills in statistical modeling and theoretical ecology required for his doctorate. “There were specific scientific skills that I needed in order to conduct my research, which aims to quantify differences in eating habits and body sizes between frogs in the Pantanal,” he explains. From October to November 2017, he took another internship, this time at the University of Otago, New Zealand, where he worked on statistical analysis.

Pereira says that on both occasions, he started planning the trip well in advance. “It is important to research the city you intend to stay in and find out everything you can about accommodation, transport, and required documentation. A useful piece of advice is to get in touch with the host university a few months in advance; they usually have staff trained to assist foreign students,” says Pereira. “I also used student groups on social media, which helped me with housing tips.”

Augusto ZambonatoPlanning
The PLOS article also advises researchers to make a detailed schedule of activities to be carried out. “A lack of prior planning, both for students and their supervisors, may result in a less productive internship experience,” says physicist Paulo Artaxo, a professor at the Institute of Physics of the University of São Paulo (IF-USP). Artaxo has taken post-doctoral fellowships in a number of countries, including the United States, Belgium, and Sweden, and has extensive experience in sending students abroad. He emphasizes that none of the students he supervises defend their doctorate without first gaining some experience abroad. He usually sends students to institutions he has collaborated with over a career that has spanned decades, including the Max Planck Institute in Germany, the US space agency (NASA), and Harvard University, USA. “My students go to laboratories overseas to analyze data collected within established international partnerships. Under these circumstances, the chances of successfully completing an internship are high,” says Artaxo.

He points out that the objective of a short-term internship is for the student to absorb new knowledge or to improve on skills that are still incipient in Brazil. “I see no point in going out to learn something that already exists at a high level in Brazilian universities or research institutions,” he says. The role of the advisor or supervisor is an important one in Brazil. Raul Pereira says that the help he received from his advisor Márcio Silva Araújo, from the Department of Ecology at UNESP, was crucial. “Having received scholarships for research internships abroad during his doctorate and postdoctorate, he helped me plan the trips and gave me advice on how to organize my research activities,” says Pereira.

For Paula de Freitas Rosa Remiro, a chemist and PhD student at the Federal University of São Carlos (UFSCAR), the four-month internship she completed at the University of Bremen, Germany, in 2017 was essential to her research in the field of ​​environmental control. “I needed to measure the adhesive forces between filters and particles, which was not possible at any Brazilian institution,” explains Remiro.

Her research involves modifying filter media with potential applications in air conditioning systems. The aim is to create a filter capable of reducing or eliminating microorganisms in enclosed environments. Remiro says she planned her trip alone, while friends with experience abroad helped her deal with the bureaucratic elements, such as sending documents
to the German institution.

Languages
Interns need to be prepared to integrate themselves into a foreign laboratory. Strong English language skills are a basic requirement for producing reports, giving presentations, participating in meetings, writing papers, and talking to colleagues. “Many Brazilians still underestimate the importance of good English language skills. A lack of fluency can compromise an internship,” says Paulo Artaxo. At institutions in other countries, such as France and Germany, it may be useful for the student to have a reasonable grasp of the local language.

“I have studied English since I was a child, which helped me a lot during the internship. I was able to develop relationships with my colleagues in the laboratory and participate in informal conversations outside work,” says biologist Fábio Machado, who did a one-year internship at the University of Massachusetts, USA, in 2004 and 2005, when he was a doctoral student at the USP Biosciences Institute (IB-USP). He believes it is important that students take advantage of their free time during internships to exchange ideas with other researchers. “Scientists like talking about their work at any time, so I went to cafés and bars with my colleagues, which helped to create lasting bonds. Some of these relaxed conversations evolved into scientific partnerships further down the line,” says Machado, who is currently a researcher at the Argentine Museum of Natural Sciences in Buenos Aires.

Interns must also be prepared to deal with cultural and legal differences. For the authors of the PLOS article, it is important that students be aware of the ethical guidelines and regulatory processes of the host institution. According to them, one of the most valuable experiences of international research stays is learning about other ways of approaching science, and being immersed in a new culture. “Go with the mentality that you are the one who has to adapt to their culture and way of working; do not expect people to adapt to you,” says the paper. Paula de Freitas, from UFSCAR, noticed differences between the Brazilian and German research systems as soon as she arrived in Bremen. “The internship opportunity taught me that German research culture is highly motivated by the problems faced by companies in the close vicinity of the university—something that is not very common in Brazil,” she says.