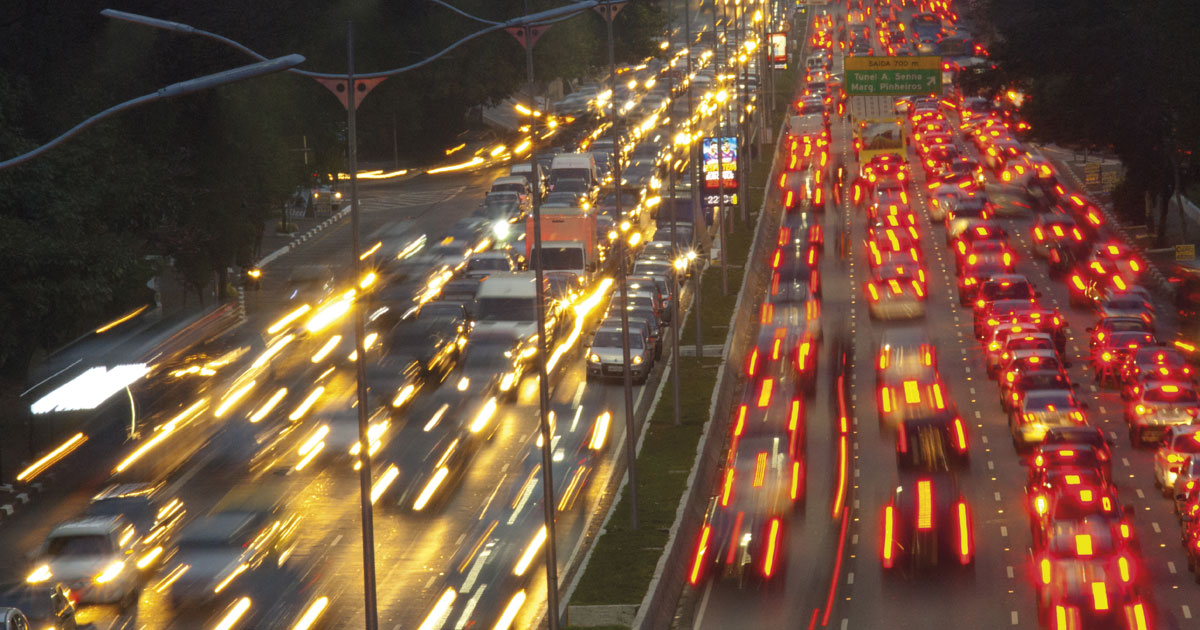 Cars and pickups produced in Brazil starting in 2017 consume less fuel and produce less pollution than those manufactured in 2012. Gasoline or ethanol use dropped 15.46%, which is the average among all the models produced by vehicle manufacturers in the country. As a result, emissions of carbon dioxide (CO2) from the burning of fossil fuels fell 16%. These numbers are part of the final results of the Incentive Program for Technical Innovation and Consolidation of the Automotive Production Chain (Inovar Auto), which ran from 2013 to 2017. The goal of the program was to increase competitiveness in the sector, producing vehicles that consume less fuel and pollute less. For this to take place, companies were expected to invest in basic industrial engineering of technology, research and development (R&D), and supplier training, in exchange for temporary tax advantages. But the technologies adopted were nearly all brought in from foreign automakers to be adapted to vehicles manufactured in Brazil.

The main goal set by the program was better fuel economy in the engine. The improvement was expected to be at least 12% over the 2012 figures, or the company would be fined. Manufacturers which reached a 15% decrease would be granted a 1% reduction in the Industrialized Products Tax (IPI), and if they reached 18% would receive a 2% reduction until 2020. To achieve these goals, fulfilling the agreement made between the federal government, carmakers and auto parts manufacturers, the industry incorporated new technologies into vehicles: new engines, lighter materials, onboard electronics, and tires with less rolling resistance.

The technological strategies mainly involved developing solutions for flex engines, which run on gasoline and ethanol in any proportion. Adapting the innovations to the flex system was the most challenging area for Brazilian engineering. One example was the dissemination of three-cylinder engines instead of traditional four-cylinder ones. They contain fewer parts and are lighter than four-cylinder engines, generating less friction and heat, which in turn results in lower fuel consumption. These engines began to be brought in from abroad in 2011, mainly for cars with 1-liter engines, but are also produced locally.

Many of the technologies used to meet the Inovar Auto goals were imported or appeared only in luxury or sports cars, such as variable valve timing, which avoids unnecessary fuel combustion. Local engineers have adapted this type of technology, which has been around since 1990, to 1-liter engines and the flex-fuel system. It is already being used in the Volkswagen Up, Ford Ka, Hyundai HB20, and Fiat Mobi.

Another strategy is the use of “green tires,” which have lower rolling resistance and require less power from the engine. They cost 7% more than normal tires, but can generate fuel savings of up to 10%. They have been developed by several tire manufacturers, using new materials and implementing changes in internal structure and tread design. The automakers also used aerodynamic lines in designing vehicles to decrease drag, and more efficient parts like new alternators that optimize battery recharge, fuel pumps, and power steering (see image).

32 kilograms lighter
General Motors (GM) began to use six-speed transmissions in both manual and automatic transmissions. The extra gear helps reduce power consumption and noise at high speed. The company makes Brazil’s best-selling vehicle, the Onix, and its engineers were able to reduce the car’s weight by 32 kilograms by reworking more than 100 components and using lighter steel. By adding green tires, they attained the 18% decrease in overall fuel economy from 2012 to 2017. In contrast, the company stated that the car’s predecessor, the Corsa, gained fuel efficiency of 10% during its life cycle between 1994 and 2016, a smaller change in a span of time four times longer than the Onix. “The incentives for research and development promoted by Inovar Auto provided the most significant jump in efficiency for the automotive industry. In this area, cars in Brazil have evolved more in the last five years than over the previous 20 years,” says Marcos Munhoz, vice president of GM Mercosul.

Only two companies, GM and Ford, have reached the 18% goal established by Inovar Auto. Audi, Honda, Mercedes-Benz, Nissan, Renault, Toyota, Volkswagen, and the PSA Group (Peugeot and Citroën) have all reached 15%. The remaining companies which have factories in Brazil reached 12%.

According to the MDIC, in general the results were very positive, considering the agreement and the investment planned by the Brazilian automobile industry in Brazil (R$5 billion per year over the duration of the program). The vehicles produced within the parameters of Inovar Auto between October 2016 and the end of 2017 amounted to 1.754 million units. The tax savings achieved through the law that established the program amounted to R$6.5 billion over the five-year period, the equivalent of 1.5% of the gross revenue of companies on the IPI tax with the purchase of raw materials from Brazil and abroad, equipment, investments in R&D, and supplier training. The automaker subset which reduced the prices of their new cars is included in these savings. The automobile industry is responsible for 22% of Brazil’s industrial gross domestic product (GDP) and 4% of total GDP, and employs 1.6 million workers.

“They were ambitious goals, we have had energy improvement between 12% and 18%, and this probably would not have happened without Inovar Auto,” states engineer Gábor Deák, advisor to the Brazilian Society of Mobility Engineers (SAE Brasil) and the Brazilian Motor Vehicle Components Industry Union. Inovar Auto set a four-year period for the local industry to adjust, and hindered imports by adding 30% to the IPI tax on the price of cars imported from companies that do not manufacture vehicles in Brazil. This encouraged automakers like Audi, BMW, Land Rover, and Mercedes to build factories in the country in order to produce at least 35,000 units per year, and also motivated those who had already established themselves in the country to invest in new products, technologies, and facilities. “This generated jobs, although there were no incentives for R&D in the auto parts industry,” says Deák.

No radical innovation
Most car sales in Brazil involve cheaper models. “The competition is fierce, with zero interest, IPVA [Property Tax on Motor Vehicles] already paid, etc. Any extra technology means cost increases. All manufacturers pursue incentives because they can have higher prices and earn discounts on the final price,” says physicist Waldyr Gallo of the School of Mechanical Engineering at the University of Campinas (UNICAMP). Gallo coordinates the Professor Urbano Ernesto Stumpf Center for Engineering Research, the only research unit linked to the automakers via a partnership between a car manufacturer (the PSA Group) and a research support agency (FAPESP) which involves researchers from several institutions to study ethanol-powered engines. “This center was not inspired by Inovar Auto. We research new engine configurations, reduced consumption and gas emissions and their impacts, and economic and environmental viability,” says Gallo.

The study “The system of innovation in the Brazilian automotive sector: Lessons learned from Inovar Auto” by Paulo Kaminski, coordinator at the Center for Automotive Engineering at the Polytechnic School of the University of São Paulo and mechanical engineers and professors Ugo Ibusuki of the Federal University of ABC and Erik Telles Pascoal of the Resende School of Engineering (RJ) questioned the competitiveness of the sector in the area of R&D. “We realized that from the point of view of radical innovation in the automotive industry installed in Brazil, much is still lacking for us to be competitive,” says Kaminski. “Most of the development of innovation in the industry continues to come from the headquarters, and Inovar Auto has not changed the situation very much for automakers in this country. The program was created amid the Brazilian industrial crisis, when the companies lost market share and jobs,” he observes. The Brazilian Ministry of Science, Technology, Innovation, and Communications (MCTIC) does not have data on indicators related to R&D in the automotive sector.

The lack of rigorous monitoring of the Inovar Auto program, showing the results attained throughout the program, is a flaw pointed out by production engineer Roberto Marx, a professor at the USP Polytechnic School. “For an industrial policy of this relevance, it must include systematic evaluation of the results from the beginning, without getting into each company’s sensitive and unique data. The government should show society which goals were exceeded and what is being done, including in R&D,” says Marx. “In the area of R&D, another fundamental question is whether companies make decisions to improve the vehicles because of incentives from the federal government, or would have done the same without them. The question remains: without incentives, would the automakers not conduct R&D, leaving their cars outdated? This is a dilemma spanning decades of industrial policy in Brazil.” According to this researcher, Inovar Auto only progressed in relation to previous initiatives because it made more specific demands of the companies in return.

The impression remains that without incentives, companies do not perform R&D and leave their cars outdated, says Roberto Marx of USP Polytech

Adriana Marotti, a professor at the School of Economics, Business Administration, and Accounting (FEA) at USP, who has been studying the issue, also considers the greatest benefit of Inovar Auto to be its requirement that automakers generate results in return, in this case fuel efficiency. As for R&D, there is nothing to celebrate. “There are no local radical innovations in the automotive industry in Brazil, aside from ethanol engines. The number of patents is always close to zero,” she says. “The carmakers consider small modifications in the chassis they make from time to time in a certain model to be R&D. The same occurs with the tropicalization of imported vehicles.” For Marotti, part of the definition of R&D in Inovar Auto also was not made clear.

The program ended as planned in 2017, but a year earlier was condemned by the World Trade Organization (WTO), which considers programs that grant tax incentives to local manufacturers and impose extra taxation on imported goods illegal (see Pesquisa FAPESP issue no. 251). This situation will need to be avoided in Rota 2030, the new federal program for the automotive industry which is expected to be announced this year.