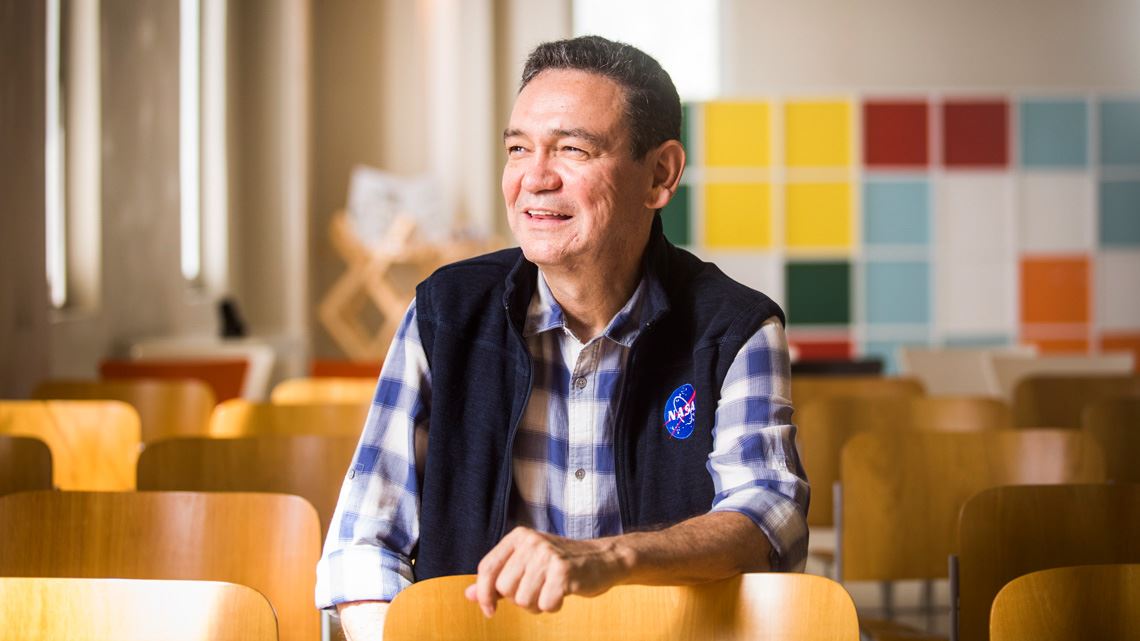 Educated at the Federal University of Minas Gerais (UFMG), for nearly 15 years Gontijo has been working at NASA

Just over two months ago, humanity was able for the first time to hear the sounds of wind blowing across the surface of Mars, Earth’s closest neighbor in the Solar System. The recordings were captured inside Jezero Crater by the Perseverance rover. This exploratory vehicle is the fifth and most sophisticated robot jeep built by the US space agency NASA, and its mission is to find any traces of microbial life that may have existed on the planet. To accomplish this, Perseverance is equipped with state-of-the-art devices, including an instrument that captures high-resolution images, records audio, and identifies the chemical elements and minerals present in Martian rocks and soil (see infographic).

Named the SuperCam, this instrument was developed with pivotal contributions from Brazilian physicist and engineer Ivair Gontijo. “I was responsible for all of the interfaces between the device and the vehicle, which is the key element of the Mars 2020 mission. I was the bridge between an international group of researchers responsible for developing the Supercam and my colleagues at NASA who designed and built Perseverance,” says Gontijo. Since the rover landed, Gontijo has been working on Martian time, monitoring the images and data sent by the instrument.

This is the scientist’s second participation in NASA missions to Mars. Passionate about astronomy since childhood, Gontijo was born 60 years ago in Moema, a city of 4,000 in the state of Minas Gerais, where he began his professional life on a cattle and horse farm. In this interview, given to Pesquisa FAPESP via WhatsApp, he tells us how he changed his career trajectory to become a key figure on one of the most advanced space missions ever undertaken.

How did you get into NASA?
I started working there almost 15 years ago, in 2006. The story of how I got hired is so long, complicated, and full of obstacles that it became a book, called A Caminho de Marte [On the road to Mars] [Editora Sextante, 2018]. I can tell you that it wasn’t the first, second, or even the third time I knocked on NASA’s door that it actually worked out. After many attempts, I was recruited when they found my resume on the website of a conference in the field of lasers and fiber optics. The engineer who hired me said he was looking for someone with exactly my experience and background in lasers and optoelectronic device manufacturing.

It took a lot of persistence and patience.
Yes. When we have ambitious plans, we need to insist on turning the many “no’s” we receive into a “yes”. In the book [which won the 2019 Jabuti Prize] I tell my whole story, from the time I left Moema, a remote city in the interior of Minas Gerais, to when I ended up at NASA. I also talk about the 25 centuries of accumulated knowledge in astronomy in general, and Mars in particular, and explain how a vehicle is designed, built, launched, and operated on Mars. I work at the Jet Propulsion Laboratory [JPL], which is near Los Angeles, California. I am completely dedicated to the Perseverance probe project. We go to work when it’s afternoon on Mars, because that’s when the vehicle sends the data to us. So my routine is based on Martian time. Since the day there is about 40 minutes longer than ours, Mars doesn’t have a fixed time zone in relation to us. Every three days the difference between Martian time and ours here on Earth advances two hours. At times, my work shift extends into the wee hours.

What’s your role in the Perseverance mission?
Beginning in 2015, I began coordinating an international group responsible for building one of the instruments onboard the vehicle, the SuperCam—or Supercamera—which examines the soil and rocks on Mars, to search for compounds associated with the existence of life on the planet. I was responsible for the interfaces between the device and the vehicle. The researchers who developed the Supercam come from institutions in three countries: seven French institutions, including the National Museum of Natural History in Paris, a Spanish university, Valladolid, and the Los Alamos National Laboratory in New Mexico, in the United States. I was the bridge between the scientists from these three groups and my colleagues at NASA who were designing and building the vehicle. I ensured that the instrument would have the appropriate volume and mass to fit the vehicle, that its software would be compatible with the Rover’s, that the electrical energy demand would be sufficient to work on Mars, and a million other details. I worked for five years, until we finished the instrument and tested all its functional capabilities, and integrated it with the Perseverance vehicle.

What were the main challenges faced in building the probe and its systems?
Building a vehicle with the characteristics of Perseverance is a very complex task that involves a large number of people. It’s all quite difficult, and whatever can go wrong generally does. That’s why we test a huge number of things to make sure everything will work well on Mars. The tests are carried out under conditions that are far more rigorous than those the probe and its equipment will encounter on Martian soil. Perhaps the biggest difficulty was working with a strict deadline, a time limit that could not be altered. We like to joke that celestial mechanics waits for no one. The vehicle had to be assembled and ready for launch between July and August 2020 [the launch took place on July 30]. If we had failed, we would have had to wait 26 months for a new window where the two planets would be in the correct positions in their orbits such that we would be able to launch.

How do you assess the results of the project so far?
We received the results of the Mars landing early in the afternoon, California time, on February 18. Around 3 p.m. I went to sleep and rested for three or four hours because I would be working that night. I was part of the group that received the data sent by the probe on its first morning there on Mars. We began receiving the first images of the parachute opening and landing on Mars, which was absolutely spectacular. So we worked from 9 p.m. to 6 a.m. the next day. It’s been a long journey, but a very exciting one. The results so far are very good. We’re still in the testing phase to make sure everything is working fine. On April 19, we released a helicopter, Ingenuity, which was shipped folded and embedded within the probe. It was lowered to the ground beneath Perseverance. The rover pulled away from it, and after that Ingenuity was free to make the first flight on Mars.

What other missions to Mars have you participated in?
I worked on the Curiosity rover mission, which was launched in 2011 and arrived on Mars in August 2012. I worked on the team responsible for the radar that controlled the vehicle’s landing. I was the engineer responsible for the radar transmitters and receivers. The cool thing about this story is that the radar on Perseverance is a copy of Curiosity’s radar. In a way, I’m indirectly involved in this other Perseverance system. 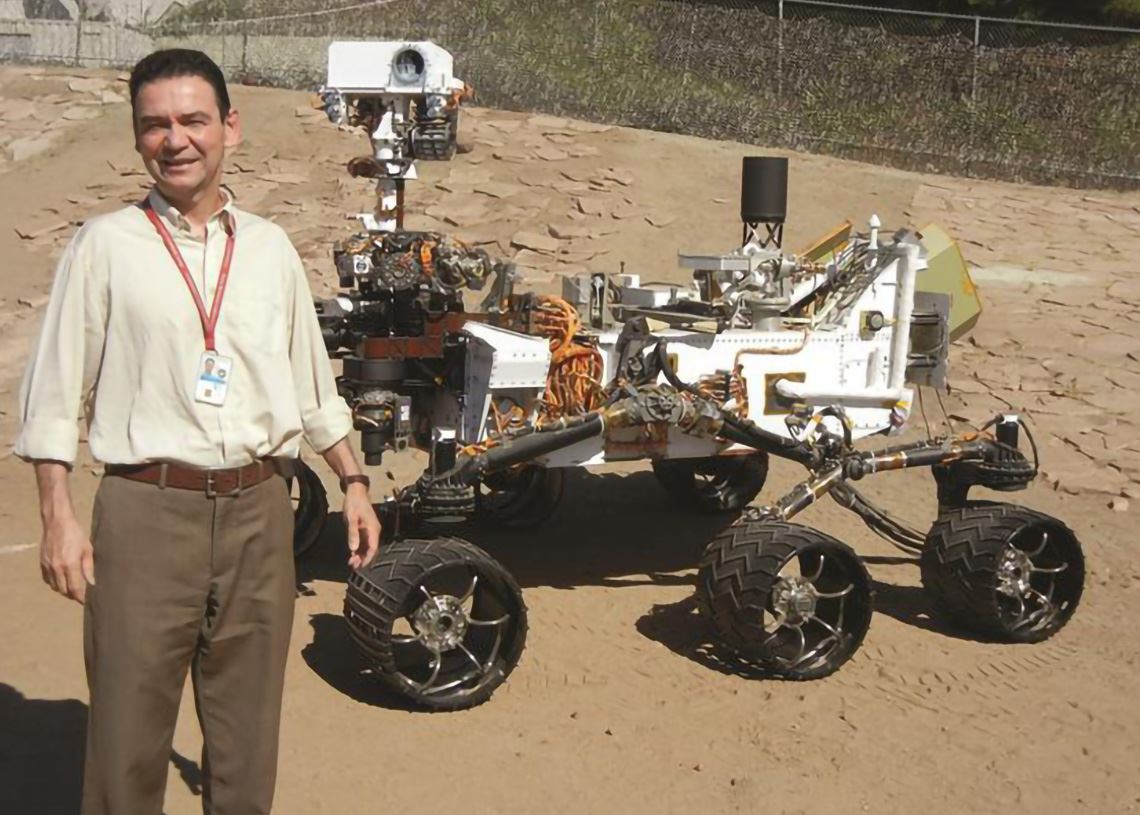 Gontijo and the Curiosity rover in the “Martian Garden,” at the Jet Propulsion Laboratory at NASA in CaliforniaPersonal archive

Are you the only Brazilian engineer on the mission?
No, there’s also an engineer from Rio, Daniel Nunes, one of the scientists on the Rimfax instrument, a radar that makes measurements below the surface of the Martian soil, up to ten meters deep. Besides Daniel, several other Brazilians work at JPL. We have a Lusophones email group, formed mainly by Brazilians, but also with some Portuguese folks and Americans who speak our language. Before the pandemic, we met up from time to time to talk in Portuguese.

What’s left to do before we can send a crewed spacecraft to Mars?
The challenges are huge and there’s still a lot to be done. For example, producing the oxygen to be consumed while traveling and while on Mars is a problem which we still don’t have a solution for. The same goes for food. A manned trip there will take 26 months, which is the amount of time the two planets’ orbits are aligned, allowing a spacecraft to launch toward Mars and fly back. I don’t know when this will happen, and I don’t think anyone can answer that question right now. But I hope to be alive to see the first humans set foot on Martian soil.

What’s your life in Los Angeles like?
I always wake up at 5 a.m., and I have a busy routine, with a lot of work. Before the pandemic, I used to go to JPL daily, which is more than 50 kilometers from my house. If there’s one good thing about this pandemic, it’s that I’m no longer driving 106 kilometers every day. I usually walk around the neighborhood every night for an hour, and on weekends I like to walk on the beach. Once in a while, I go for a walk in the mountains here near Los Angeles, a very beautiful place.

Where did you work before being hired by NASA?
NASA is my fifth job in the United States. Besides Brazil, I lived in Scotland, where I earned my doctorate. In the United States, I initially did a postdoc degree at UCLA, the University of California at Los Angeles. After that I worked for fiberoptic telecommunications companies and a biotech company, designing lenses for cataract surgery. Only later was I hired by NASA.

What’s your academic background?
I attended only public schools in Brazil. In high school I took a vocational program in agriculture and I pursued this career for three years. I managed a ranch for raising cattle and horses and growing rice and beans in northern Minas Gerais. There was no electricity and the nearest town was 100 kilometers away. After that I went to Belo Horizonte, where I studied physics at UFMG [Federal University of Minas Gerais] and got my master’s degree in optics. I got a doctorate in electrical engineering at the University of Glasgow, in Scotland. Since childhood I’ve been fascinated by science and technology, especially astronomy. The first time I saw television was in 1969, during the broadcast of mankind’s arrival on the moon. I always thought about working in the space field. That’s why I tried so hard to get a job at NASA.

What would you say to young Brazilians who dream of working there?
If even I could get a job at NASA, I think that it’s within the reach of most people. When we’re young, almost anything is possible. We must, of course, persist and have big dreams and long-term plans. You also need to be patient, since these opportunities don’t just happen overnight. Ambitious plans don’t materialize in six months, one year, or five years. Sometimes it takes ten years or more. My book has a color photo album with an interesting montage at the end. The top part of the page shows a picture of me in front of the jeep at the farm where I worked in Minas and the bottom is a picture of me at JPL, in a place known as the Martian Garden, next to the robot jeep Curiosity. Between the two photos, 30 years passed. It’s proof that if we stay focused and persevere, we can achieve our goals.