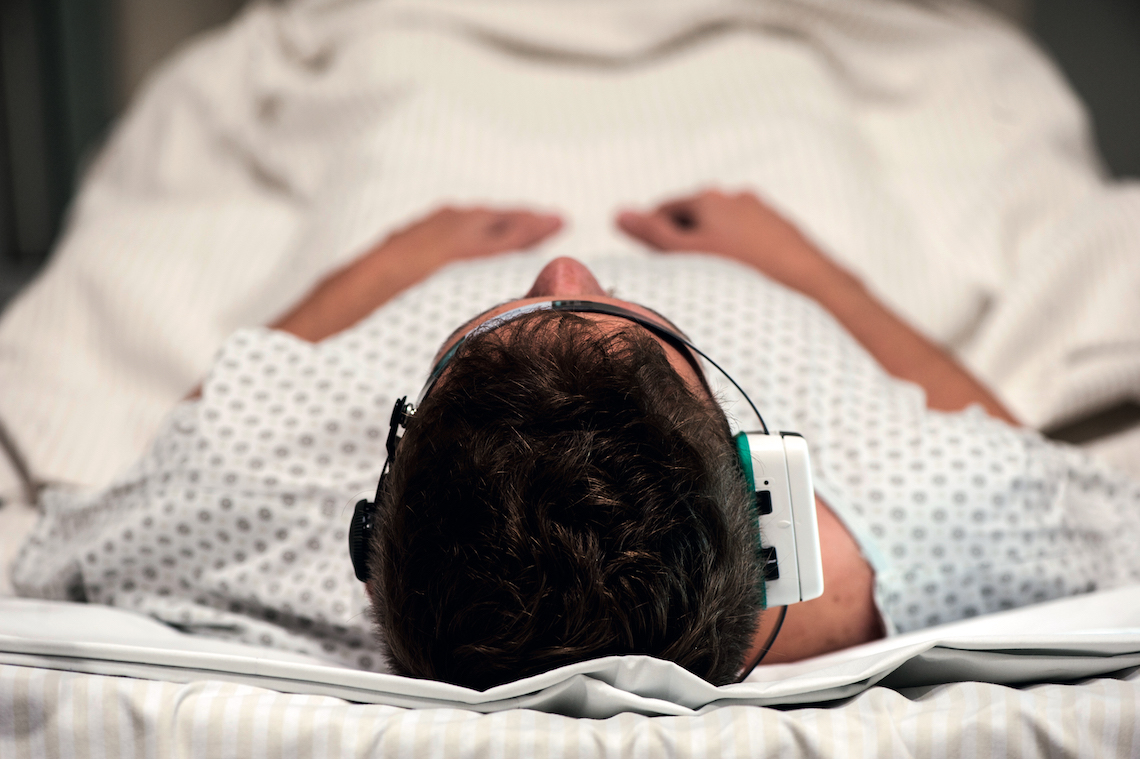 Since last year, intensive care physicians at Sírio-Libanês Hospital, in São Paulo, Brazil, have been testing a new device for noninvasively monitoring an important parameter in intensive care unit (ICU) patients—a small sensor attached to the patient’s head with a headband that transmits intracranial pressure data to a wired bedside monitor. The device is designed for use with neurocritical patients who have suffered head trauma or stroke, have hydrocephalus, or have had other brain pathologies.

The new sensor, developed through a research effort initiated 12 years ago at the São Carlos Institute of Physics at the University of São Paulo (IFSC-USP), with funding support from FAPESP through five grants from the Technological Innovation in Small Businesses (PIPE) program, has attracted interest from neurologists and garnered several awards for innovation. The sensor is capable of monitoring pressure within the skull without the need to perforate the skullcap to insert a sensor in the brain, the most commonly used method of measuring brain pressure.

The startup brain4care, which developed and is now marketing the solution, has recently secured its second contract with Rede D’Or, a hospital network with campuses in Rio de Janeiro, São Paulo, and other major cities in Brazil. Six other deals are as good as closed, and another 20 are at an earlier stage, says partner and CEO Plínio Targa. He estimates that brain4care—which is based out of São Carlos, in southeastern Brazil—will need to sell 180 sensors to break even, a milestone he expects will be reached by mid-2020.

The project to develop the device was born out of a personal struggle experienced by Rio de Janeiro–born physicist and chemical engineer Sérgio Mascarenhas Oliveira, a retired USP professor, now 91 years old. In 2006 he was diagnosed with hydrocephalus, a condition characterized by an accumulation of fluid in the brain. Physicians initially thought the scientist had Parkinson’s disease. Mascarenhas was surprised at the difficulty in reaching a diagnosis, which typically requires an invasive procedure to be confirmed, and the following year began a research program at IFSC-USP that would lead to the development of the sensor. The project was codeveloped with researchers from several institutions, including the schools of medicine at the Federal University of São Carlos (UFSCar) and USP Ribeirão Preto, and with physicians at the University of Porto’s Hospital São João, in Portugal. 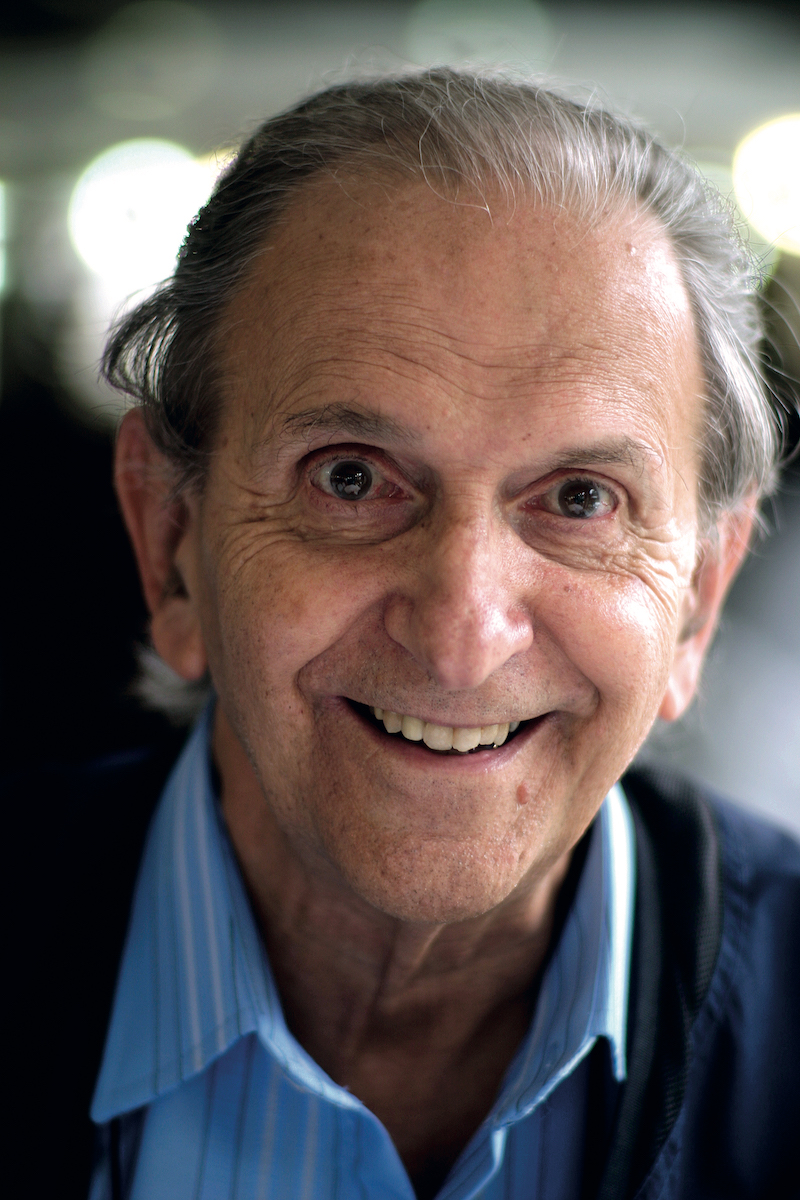 Physicist Sérgio Mascarenhas of USP, the inventor of the deviceMiguel Boyayan

In 2014, Mascarenhas and two colleagues—biochemical and pharmaceutical engineer Gustavo Frigieri Vilela, who did his doctorate under him at USP São Carlos, and engineer Rodrigo Andrade—took the decision to create the startup, which until last April was operating under the trade name Braincare. “Our global trademark is now brain4care,” says Targa, who joined in 2016 as an angel investor alongside Carlos Bremer—both are engineers trained at USP São Carlos. “We are currently developing a business plan to enter the US market and hope to have a presence there by 2020,” he says, noting that patents for the device have already been issued in the US and Europe.

Toward the end of 2017, the company received an injection of US$5 million from Miletus, an investment fund run by Horácio Lafer Piva, president of Brazilian-based pulp and paper producer and exporter Klabin. The fund became the company’s sixth investor. “This is the first time the Klabin family has ventured to invest outside the pulp and paper business,” Piva told the Brazilian daily Valor Econômico. “We are highly focused on our business and our attention is not easily diverted from it. But this is a project with a worthy purpose, which is providing access to a new vital sign—intracranial pressure.”

Indeed, brain4care’s founders and investors hope to make intracranial pressure, or ICP, as accessible as the five vital signs commonly monitored by physicians today—temperature, blood pressure, heart rate, respiratory rate, and pain. “The company’s new trade name fits within this context. Our brand concept suggests that by looking at the brain you can manage your overall health,” explains Targa.

“As our research deepened, we found that intracranial pressure is related not only to neurological problems such as head injuries, hydrocephalus, and brain tumors, but also to heart disease, eclampsia [high blood pressure in pregnant women], and liver-related conditions, for example,” he explains.

The sensor was collaboratively developed by researchers from multiple public universities

New wireless solution
The health entrepreneurs hope the device will soon be available at clinics and even in ambulances. In February this year, the company obtained approval from the Brazilian Health Regulatory Agency (ANVISA) to market a new wireless version of the sensor, which requires neither a monitor nor wired connections. The signals are transmitted via Bluetooth from the device to a mobile phone, tablet, or computer.

An app displays real-time data at the bedside while also placing it in the cloud, where the data is processed and a report is automatically generated and made available to physicians and nurses, even when not on location. For hospitals, each sensor costs R$3,500 per month, with this fee covering as many monitoring sessions as necessary.

The equipment-as-a-service business model and the strategy to make ICP a newly adopted vital sign were developed in Silicon Valley in 2017, where brain4care was accelerated at Singularity University, a California-based innovation center. The investment from Miletus helped brain4care set up a more professional operation in São Carlos and open an office in São Paulo. “This took us from research startup to a full-fledged operational business,” says Targa. 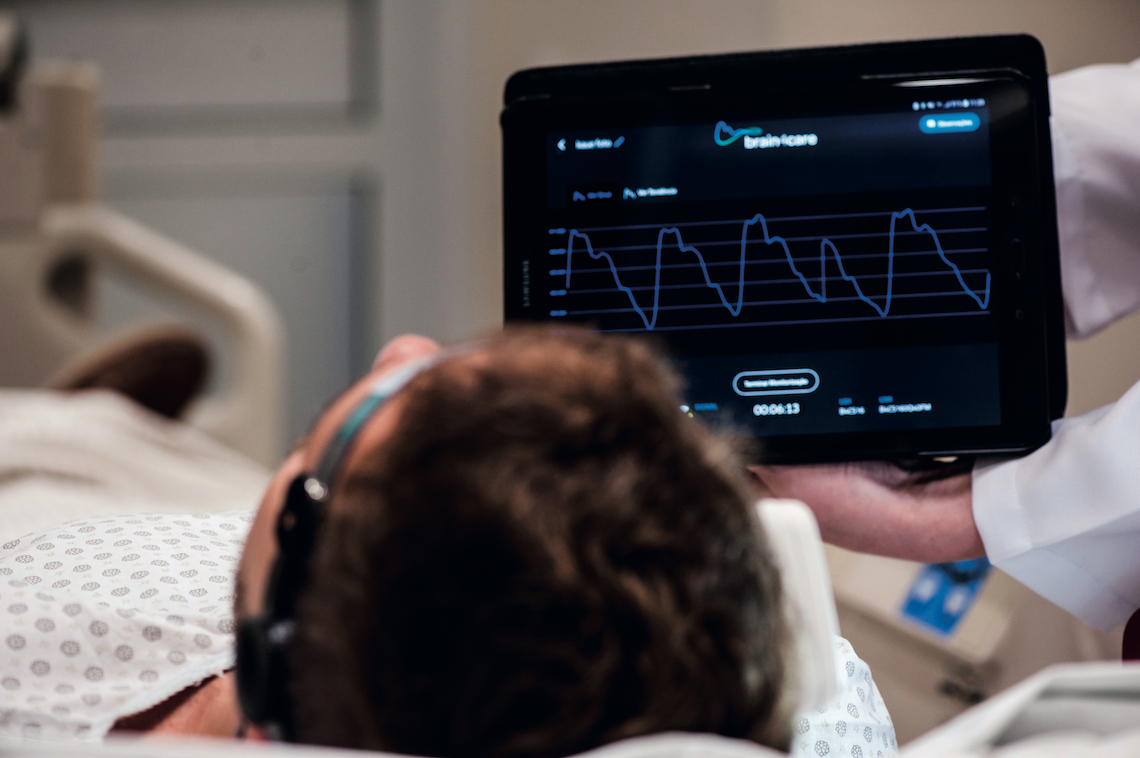 Future challenges
The three devices supplied to Sírio-Libanês Hospital are being used to monitor patients at the neurological ICU. “We are very excited about the partnership,” says intensivist José Mauro Vieira Júnior, head of quality and safety at the hospital. He admits the device still has its limitations, such as not providing an absolute value of pressure within the skull—in healthy subjects, this should range from 5 to 15 millimeters of mercury (mmHg). Conventional invasive monitoring methods generate readings in numerical form, whereas the brain4care product does not. The sensor delivers information as graphs showing intracranial pressure pulse morphology—as in an electrocardiogram—and the ICP trend over the monitored period. Because of these limitations, the hospital has utilized brain4care’s product in conjunction with other tests including transcranial Doppler ultrasonography monitoring, ultrasonographic measurement of optic nerve sheath diameter, computerized tomography scans, and electroencephalograms.

“The device certainly has great potential, and I’m sure brain4care is further developing its sensor to deliver a numerical result using a mathematical algorithm to yield an absolute pressure reading,” says Vieira Júnior. “That would be highly valuable, as much of what we do today is based on ICP readings. We need them to make a diagnosis of intracranial hypertension.” The medical community is eagerly awaiting robust clinical evidence of the usefulness of the device in bedside applications,” says the physician.

At Sírio-Libanês Hospital, a group led by neurointensivist Fábio Machado is designing a research project to compare the brain4care device with other available bedside ICP monitoring technologies. In addition to this study, there are currently 28 other ongoing research projects on the use of the device and intracranial pressure, says Plínio Targa.

Around 300 researchers are involved, including professionals from universities such as USP Ribeirão Preto, UFSCar, the Federal University of São Paulo (UNIFESP), and Stanford. “Scientific research is at the core of our business. If there are people looking to doing research on intracranial pressure, we’re their partners of choice,” says Targa.