An important stage of one of the Brazilian space program’s high-priority projects was completed in October: the construction of a rocket capable of launching satellites into Earth’s orbit. The first ground test of the S50, the largest rocket engine ever developed in the country, was carried out by the Institute of Aeronautics and Space (IAE) in São José dos Campos, São Paulo State. At 6.2 meters (m) long, 1.5 m in diameter, and designed to burn 12 tons (t) of fuel (a solid propellant formed of a combination of several chemical compounds), the engine is the first of its size to have a carbon fiber casing, a material lighter than steel that has been used in previous devices.

The procedure, called a static fire test, involved activating the engine while it was fixed to a concrete blast block, with sensors collecting data on its behavior. The temperature inside the structure exceeded 2,700 degrees Celsius (ºC) and the internal pressure exceeded 70 times the normal atmospheric pressure (70 atm). The engine will be the main propulsion system for one of the Brazilian space agency’s most revered projects: its microsatellite launch vehicle, known as VLM-1.

“We used more than 200 sensors, which provided important data on the engine’s thrust curve, temperature, and pressure, as well as information on vibration levels and any displacements the rocket underwent when pressurized,” says Major Rodrigo César Rocha Lacerda, an engineer and head of the VLM-1 project at IAE. According to the agency, which falls under the command of the Brazilian Air Force, the S50 passed the test, allowing the project to proceed.

The engine was designed and developed by IAE with funding from the Brazilian Space Agency (AEB). It was manufactured by private company Avibras Indústria Aeroespacial, which is also based in São José dos Campos. “The S50 is VLM-1’s primary system,” explains Lacerda. The launch vehicle project began in 2014 and is the result of a partnership between AEB and the German Aerospace Center (DLR).

Brazil is estimated to have invested approximately R$170 million in the project, of which R$110 million has already been spent, according to Paulo Roberto Braga Barros, an electrical engineer and director of portfolio management at AEB. To date, most of the money has been spent on the contract with Avibras to produce six S50 engines for ground tests and the VS-50 sounding rocket, a suborbital vehicle that will be built before VLM-1 as part of its development process. The engines for VLM-1 have not yet been contracted—this will require funding from the federal government.

The Brazilian and German space agencies intend to use VLM-1 to enter the market for launching nano- and micro-satellites, which weigh up to 10 kilograms (kg) and 10–100 kg respectively. Capable of capturing and transmitting images in near real time, these satellites are used to observe and monitor Earth, with applications in climate and environmental monitoring, logistics, security, espionage, and more. They are also used in machine-to-machine connections in systems that utilize the Internet of Things (IoT).

This is a niche industry that according to experts, offers great potential. The report Global Nanosatellite and Microsatellite Market Analysis and Forecast, 2020-2026, published by American consultancy ADS Reports, states that these spacecrafts generated global revenues of US$283.1 million in 2019 and estimates an annual growth rate of 25% until 2026.

For AEB, VLM-1 will also serve to add Brazil to the small group of nations capable of developing and launching their own satellites. “We will be the 13th country capable of putting satellites in orbit from its own territory, with its own launch vehicle,” explains Barros. “This project will allow us to launch nano- and microsatellites into orbits where and when we need them,” he adds. “Brazil will earn a new position in discussions about the use of outer space.”

Maiden flight
The maiden flight of VLM-1 is planned for 2025. It is being designed to put payloads of up to 30 kg into low orbits at altitudes of 300 kilometers (km). For this to occur, a series of steps will have to be completed. The S50 engine, for example, is scheduled to undergo another static fire test in the second half of 2022. Assuming it passes again, it will be ready for installation on the VS-50 rocket, scheduled for launch in August 2023.

At 12 m high, the VS-50 will conduct a suborbital flight at an altitude of 100 km above sea level, but it will not launch any payload into Earth’s orbit. A second flight for the VS-50 is planned for 2024. The rocket’s two test flights are important for verifying the systems that will later be part of VLM-1.

The VS-50, according to Lacerda, will be used to test various VLM-1 structures, such as the stage separation interfaces, navigation control systems, flight telemetry, electrics, and pyrotechnics (for igniting the engine). In astronomy jargon, stages are the various segments that make up a rocket. Each stage has its own propulsion system to increase the vehicle’s speed, which is then discarded during the flight. The idea is that the VS-50 flights will help reduce the risks of VLM-1’s first launch.

The launch of the suborbital rocket will also be used to test the launch infrastructure of the Mobile Integration Tower (TMI) at the Alcântara Space Center (CEA) in Maranhão. In addition to being part of VLM-1’s development process, the VS-50 rocket represents a new product that IAE will be able to sell on the international market. “It has great potential as a test platform for hypersonic accelerators,” suggests Lacerda. The VS-50 is designed to be used as a launch pad for an experimental hypersonic vehicle being developed by the European Space Agency, Hexafly-INT. 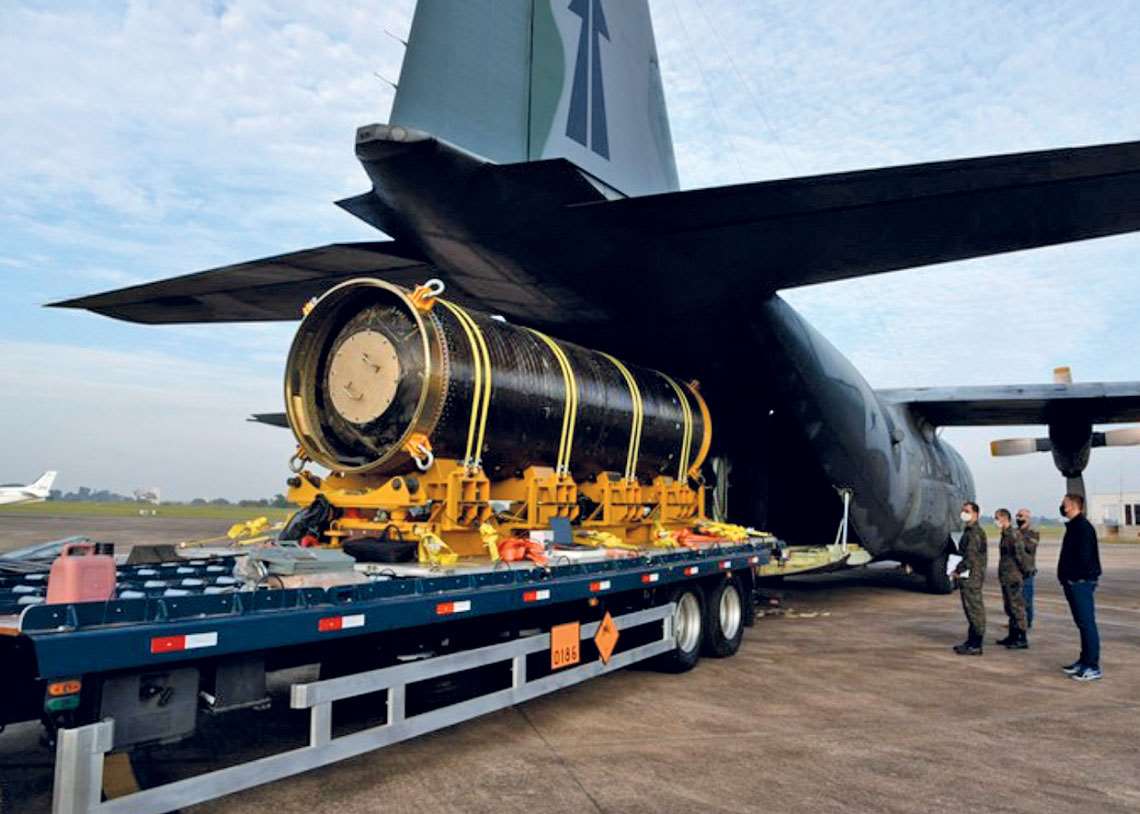 There will be three propulsion systems in VLM-1: two S50 rocket engines and a much smaller S44 rocket engine containing 800 kg of solid propellant. The S44 was tested on the VS-40 sounding rocket in 2012. It is now being remodeled by Cenic Engenharia, a company from São José dos Campos, and is set to undergo a static fire test this year or in 2023.

The DLR will be responsible for the other systems on the VS-50 and VLM-1, such as the onboard electronic services module, control and navigation systems, interstage adapters, the TVA mobile nozzle actuation system, which controls the direction of the jets to control the rocket’s attitude, and the nose cone, which contains the satellites to be launched. Most of the German components have been produced and some are already in Brazil for integration tests with the engines, says Lacerda.

A shortage of financial, technical, and human resources in Brazil raises doubts among experts who have worked with AEB and the IAE about the country’s ability to fulfill its commitment to the VLM-1 project. Not everyone, however, is comfortable publicly expressing their opinions.

Ariovaldo Félix Palmerio, who has a PhD in mechanical engineering and worked as head of systems engineering at the IAE between 1975 and 2011, is enthusiastic about the project but has reservations about Brazil’s capability to see it through. “The IAE has lost a lot of qualified professionals in some areas of expertise and may have difficulties completing these projects,” he suggests. In recent decades, he explains, the space program has failed to replace professionals who retired or moved to the private sector.

Petrônio Noronha de Souza, a technologist at the Brazilian National Institute for Space Research (INPE) and AEB’s director of space policy from 2012 to 2018, says that a lack of continuity in the leadership of aerospace projects in the Brazilian Air Force is also a problem. “The military frequently reallocates officers. When a military leader gains the experience needed to lead an aerospace project, they are replaced by someone else that may not have the same skills or knowledge. This process leads to inefficiencies and impacts ongoing projects, which are always long-term,” he points out.

Another problem highlighted by Souza is the irregular funding and projects that make it difficult to maintain continuous activity in the Brazilian aerospace industry. As these conditions have persisted over recent decades, there has been a breakdown of productive capacity and loss of know-how, forcing each new project to start almost from scratch, he says.

According to Palmerio, the shortage of human, financial, technical, and administrative resources is at the heart of the failures surrounding the VLS-1 satellite launch vehicle that Brazil began working on in 1985. The last of these failures occurred when one of the engines in the third prototype of the rocket unexpectedly ignited on the ground three days before the scheduled launch in Alcântara. The August 2003 accident led to the death of 21 technicians and engineers and damaged the TMI, which was only reconstructed nine years later. The construction of VLS-1 was one of the objectives of the Complete Brazilian Space Mission (MECB), the country’s first major space program, established by the federal government in the late 1970s.

In the book Introdução à tecnologia de foguetes (Introduction to rocket technology; SindCT, 2017), Palmerio says of the accident: “A well-executed rocket project is already potentially dangerous. Without proper support, the triggers for failures are an even greater risk.” He believes the Brazilian space program should only continue if conditions allow it to properly execute its projects.

The VLS program attempted two previous launches, both of which also failed. The project officially ended in 2016 without ever successfully launching a satellite. At the time, the VLM-1 agreement between the Brazilian and German space agencies has already been established. According to Souza, it was clear to the AEB that qualified personnel and funding were insufficient to carry out both projects. It chose to prioritize the VLM-1 and do everything it can to complete the project.

For some experts, VLM-1 was not the most promising option. “It’s an outdated project compared to recent trends,” says Souza. These days, private companies such as Space X, Virgin Orbit, and Arianespace are taking the place of government agencies in launching nano- and micro-satellites into orbit. One commercial strategy adopted by these companies is to launch dozens of satellites at the same time to reduce operational costs.

Nano- and micro-satellites to be used for academic research often hitch a ride into space on larger rockets, paying a reduced fee or even free of charge. Palmerio believes the AEB could also establish a foothold in a booming market by offering to launch multiple nanosatellites, but it must first gain the trust of potential consumers with a successful flight of its launch vehicle.

In theory, it should be simpler to build VLM-1, which can carry payloads of up to 30 kg, than its predecessor, which was designed to carry 200 kg. There were four thruster systems on VLS-1, one more than VLM-1. Both rockets have a height of around 20 meters, but VLS-1 had a mass of 50 t at take-off, while VLM-1 weighs just over half of that, at 28 t. The VLS-1 was also designed to reach higher orbits at around 750 km from Earth, more than double the target for VLM-1 (see infographic above).

Regardless of the size, building a satellite launch vehicle is a complex and expensive task. As explained by Lacerda from the IAE, these vehicles fly under extreme conditions of speed, pressure, vibration, and temperature, and their systems therefore have to be manufactured to highly specific requirements not demanded by other aeronautical systems in terms of mass, structural strength, environmental conditions, and operational performance. “Few countries are capable of developing a launch vehicle,” says the major. “It is a challenging goal that we are pursuing with great determination.”