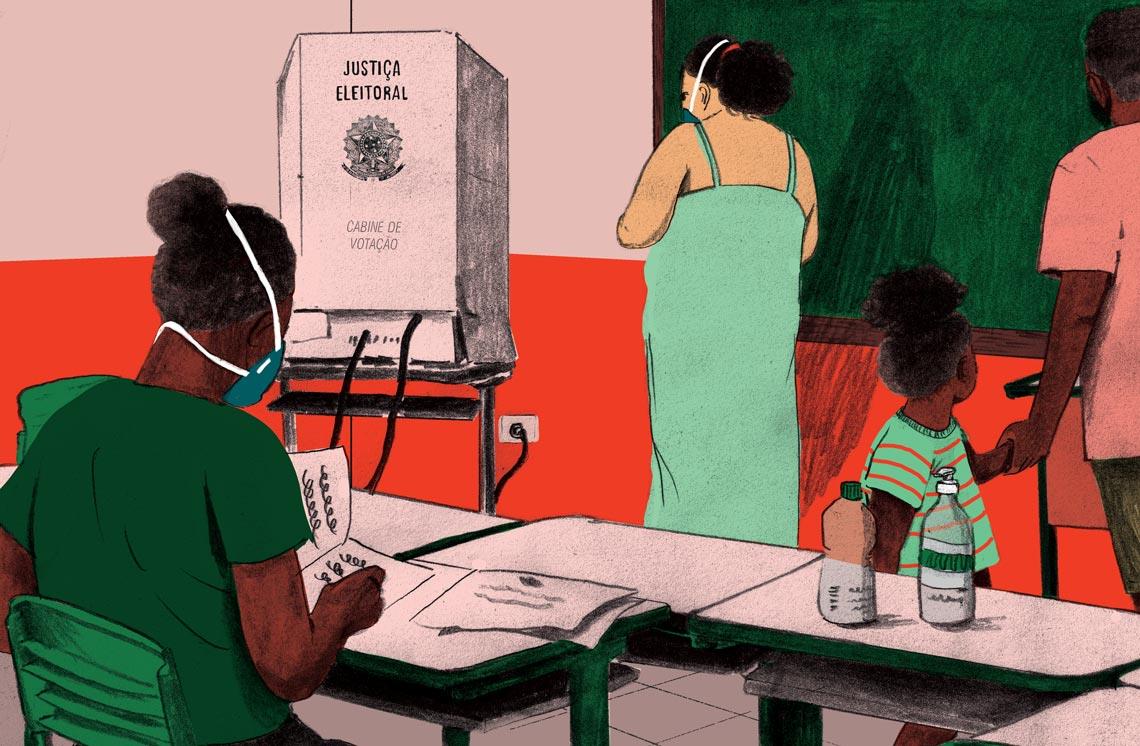 The first records of disinformation impacting political processes date back to Ancient Rome (753 BC to 476 AD), when Caesar Augustus (63 BC to 14 AD) used short phrases on coins to defame his rivals and become the first ruler of the Roman Empire (27 BC to 476 AD). But as Portuguese historian Fernando Catroga of the University of Coimbra recalls in an article published in 2020, the emergence of digital technology has given the phenomenon new life, including the ability to go beyond manipulating the facts—now, the aim seems to be to replace reality itself. A study on the topic, carried out by researchers from the University of São Paulo’s Law School (FD-USP) between April 2020 and June 2021 with funding from FAPESP, analyzed how Brazilian legal organizations have reacted to false information spread online during the 2018 election period. A lack of consensus on the concept of disinformation and difficulties measuring its consequences were identified as central to the passing of new legislation.

Celso Fernandes Campilongo, the legal scholar from FD-USP who led the study, notes that 15 years ago, public opinion was mostly formed and influenced by long, reflective analyses disseminated centrally by the mainstream media. “Today, people are faced with an avalanche of short and discontinuous information published by people with a strong presence on social media. In a way, memes and jokes have replaced analytical texts,” he points out. Campilongo cites the Continuous National Household Sample Survey – Information and Communication Technology (Continuous PNAD – TIC), published in April 2020 by the Brazilian Institute of Geography and Statistics (IBGE), to highlight that access to social media can be seen as more democratic. The survey indicated that in 2019, three of every four Brazilians used the internet, with cell phones being the device most frequently used for this purpose. It also showed that 95.7% of people in the country with internet access use apps to send or receive text, voice, or images.

Campilongo points out that since the Proclamation of the Republic in 1889, elections in Brazil have been marked by authoritarian actions. As an example, he cites the Credentials Verification Commission, which was created during the Empire of Brazil and gained importance during the First Republic, especially from 1899 onwards, under the rule of president Manuel Ferraz de Campos Sales (1841–1913). The commission allowed the central government to remove opposition candidates from political office, even elected officials. For Campilongo, other examples of the phenomenon include the ongoing use of the so-called “controlled vote,” where people vote for candidates indicated by political chiefs or electoral leaders, and the fact that people who cannot read or write were only given the right to vote in 1988.

The United Nations Educational, Scientific and Cultural Organization (UNESCO) advises against use of the term “fake news,” noting that the word “news” refers to verifiable information of public interest. Information that cannot be classified as such should not be called news. In place of fake news, the organization suggests using the term “disinformation” in reference to deliberate attempts to confuse or manipulate people via the transmission of falsities. The term “misinformation,” meanwhile, should refer to misleading content disseminated with no intent to mislead anyone.

“Considering this history, the 2018 elections were marked by the unprecedented role played by digital communication, including social media and private messaging services, which became channels for the massive dissemination of disinformation. We analyzed the repercussions this has had on the legal system,” says Marco Antonio Loschiavo Leme de Barros, a jurist from Mackenzie Presbyterian University and another author of the article, which had five authors in total. In 2015, Brazil’s Supreme Court (STF) prohibited companies from funding political parties and campaigns with the aim of reducing the influence of money in elections and giving representatives from disadvantaged social groups a more equal platform. According to Loschiavo, the move ended up destabilizing the electoral market, with the support that was previously financial in nature migrating to other environments—business owners began paying for huge amounts of information to be shared on social media as a way of ensuring their best interests are upheld.

Regarding initiatives brought in to regulate the online environment before 2018, FD-USP legal expert Lucas Fucci Amato, another member of the research team, explains that the Brazilian Civil Rights Framework for the Internet, in force since 2014, was the first legislation passed for this purpose, establishing principles, guarantees, rights, and duties for internet users, as well as guidelines for state involvement. Another milestone was the General Data Protection Law (LGPD), passed in 2018, which govern the processing of personal data online. In 2019, the Electoral Code prohibited mass broadcast messaging through mobile apps.

On the spread of false information relating to political issues, Amato recalls that the Electoral Code establishes the crimes of slander, defamation, and libel related to the dissemination of untrue information. In addition, Law 9.504/1997, known as the Election Law, provides for the right to respond in cases where untrue or offensive information is shared, making it a crime to publish content online that is harmful to the image of political candidates, parties, or coalitions. “These laws were created to govern the actions of large corporations and regulate situations relating to slander, defamation, and libel that occur centrally. With the emergence of digital platforms, communication has become faster and more decentralized, and the controls established in the legislation are no longer effective,” says Loschiavo. 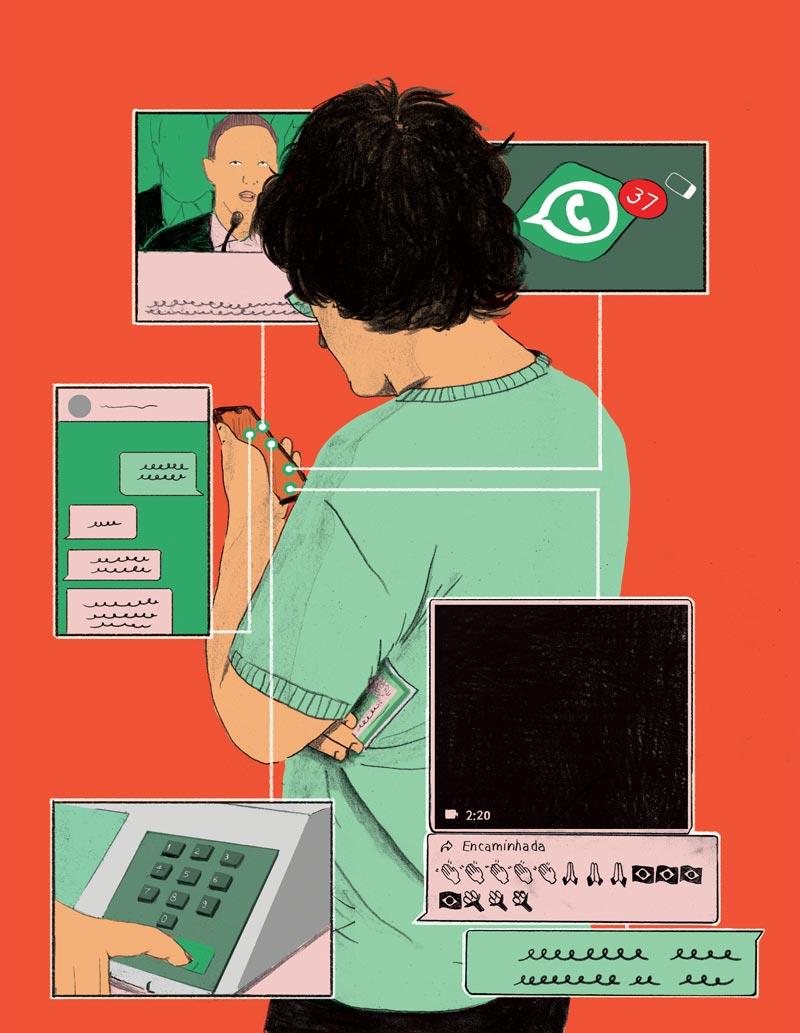 “As a result of these changes, we found that the justice system has found it difficult to deal with international flows of communication and to regulate the dissemination of false information online,” says Amato about the results of the study. The researchers analyzed recent efforts by the public authorities to control disinformation, finding that the judicial system has taken cautious steps to protect the digital environment. “In the legislative branch, disputes have led to successive delays in voting on bills and postponements to the enforcement of others that have already passed. To resolve cases involving allegations of disinformation, judges have resorted to indeterminate, generalized principles, instead of establishing clear and precise rules, as well as leaning on the assistance of experts in technology and digital law, including companies in the sector,” says the legal scholar.

With respect to Brazil’s Superior Electoral Court (TSE), Amato highlights that until early 2021, its decisions were monocratic, meaning they were made by a single judge rather than a commission, which does not contribute to the establishing of good jurisprudence. “These elements show that the TSE acted in favor of freedom of expression, avoiding censorship to the detriment of greater control over the dissemination of false content via private messaging apps and social networks,” says Amato.

Loschiavo notes that the research also identified that the primary means adopted by the Brazilian courts to combat disinformation was to demand the removal of intentionally false content, in addition to requiring platforms to flag potential untrue information. “The concepts of fake news and disinformation remain unclear. There is no definition for them in electoral law, which poses an interpretation problem for the courts,” he explains.

Anti-disinformation algorithm
Researchers from the Center for Mathematical Sciences Applied to Industry (CEMEAI), based at the Institute of Mathematics and Computer Sciences of the University of São Paulo (ICMC-USP), one of the Research, Innovation, and Dissemination Centers (RIDCs) funded by FAPESP, have created an algorithm capable of detecting false information with 96% accuracy. The tool, which combines mathematical models created from more than 100,000 news items published in the last five years, can be accessed at www.fakenewsbr.com. “The algorithm tends to understand texts with an imperative tone or a sense of urgency, for example, as fallacious, but it also analyzes the context of the words before making a prediction about whether or not the content in question is false,” explains statistician Francisco Louzada Neto, Director of Technology Transfer at CEMEAI. According to Neto, the platform has received more than 4,000 hits since February 2022 and will be continuously updated to keep up with the latest false information being spread.

Another challenge for the justice system, according to Loschiavo, is the difficulty of proving the potential harmful use of disinformation and its ability to interfere in the outcome of elections. “In the survey, we identified that after 2018, the judiciary realized that the most effective way to deal with disinformation is through preventive action. As a result, the TSE started inviting platforms to sign agreements undertaking to adhere to programs that combat disinformation, moderate content, check sources, limit message forwarding, and block fake accounts,” he says.

The discussions triggered by the 2018 election led to the formulation of Bill No. 2,.360/2020, known as the Fake News Act, which is currently in the Brazilian House of Representatives. The bill outlines the need for digital platforms to flag adverts so that users can differentiate them from news, as well as establishing that international companies must have representatives in Brazil capable of responding to the judicial system when requested. According to Loschiavo, it also states that technology companies are expected to identify and warn of abusive behavior, such as fake accounts that purport to be someone else while disseminating massive amounts of content designed to destabilize public debate. He highlights the concept of “combined self-regulation” introduced by the bill, which calls for the creation of a collaborative entity involving digital communication companies, members of the government, and broader society to jointly develop regulations for the digital environment. “This mechanism, however, carries a risk that public interests will be overshadowed by private ones,” he points out when reflecting on the weaknesses of the proposed new law.

Ivan Paganotti, a researcher at the Methodist University of São Paulo, also believes the bill’s lack of a clear definition of the concept of disinformation could threaten the right to freedom of expression, as has occurred with legislation in other nations, such as Malaysia. “The Asian country’s law defines disinformation so broadly that any data not legally confirmed can be considered false. Since the law came into force in 2018, many people have been unfairly penalized,” says Paganotti, who has been researching the topic of online disinformation for four years. He points out that the dynamic is similar in Russia, where legislation to combat disinformation is being used to curtail any news that is critical of the country’s war against Ukraine.