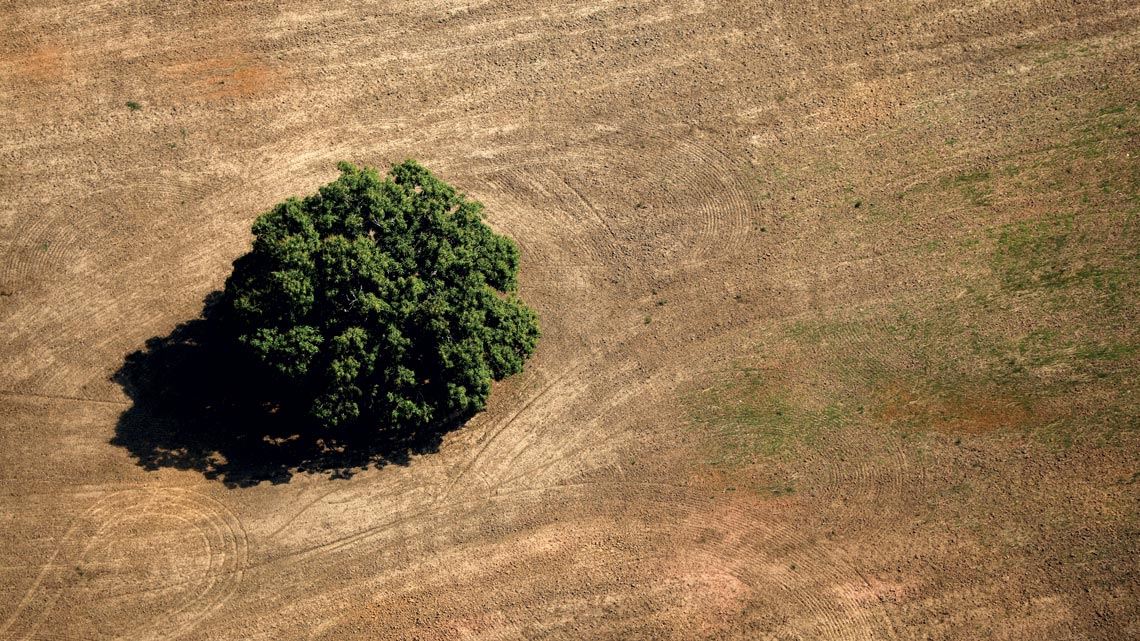 Deforested area of the Amazon rainforest near Porto Velho, Rondônia

Between 1985 and 2018, the area of South America occupied by native vegetation shrank by 16%, while the land dedicated to livestock, agriculture, and commercial tree farming grew by 23%, 160%, and 288% respectively. Over the 34 years, 268 million hectares—an area almost the size of Argentina—were modified by humans. The sum of the area altered by human activity in the above period and beforehand reached 713 million hectares in 2018, about 40% of all of South America. The data are part of a study led by Bolivian geographer Viviana Zalles, from the University of Maryland, USA, in collaboration with Brazilian researchers, which was published in the journal Science Advances in late March. “In the last 34 years, we have changed the land use of an area equivalent to 21 football fields per minute, on average,” highlights Zalles.

Land use changes generally mean that an area of forest has been cleared to create physical space for economic activities, such as agriculture, livestock farming, or infrastructure. But as well as the expansion of agriculture and industry into areas of vegetation, the study found that 55 million hectares of natural landscape seem to have been altered without any visible purpose. “This is an area larger than Spain, representing a significant loss of functioning to the ecosystem, without producing any financial benefit,” says the geographer. “It is a situation where everyone loses, from both an environmental and an economic perspective.” During the study period, the size of the area modified by humans increased by 60%. In Brazil, which accounts for almost half of South America’s total area, the rise in altered land use was the highest on the continent at 64%, and the Amazon was the most impacted biome. In Argentina, the second largest country in the region, the modified area only increased by 23% in the period.

To assess land use and occupation changes made by humans, especially in relation to natural vegetation, Zalles’ group used a large publicly available database of images taken by the Landsat satellites, a joint program run by NASA and the US Geological Survey (USGS). Launched in 1972, the initiative uses cameras mounted on satellites to observe the earth’s surface. The study used data from 1985, the first full year that South America was monitored by a Landsat satellite with a spatial resolution of 30 meters. The researchers selected random images of a thousand sections of the continent and recorded how the areas in this sample were used in each of the 34 years covered by the study. Based on the records and trends of these sections, land use changes were calculated for all of South America.

Brazil made a significant contribution to the research. Data produced by the Annual Mapping Project for Land Cover and Use in Brazil (MapBiomas), a project run by non-governmental organization (NGO) Observatório do Clima, and by the Image Processing and Geoprocessing Laboratory (LAPIG) at the Federal University of Goiás (UFG), were used to verify the study’s observations. One of the coauthors of the article, UFG geologist Laerte Guimarães Ferreira, explains that the data obtained from 1,000 Landsat images by Zalles were compared with more than 85,000 sampling points provided by LAPIG. “We compared the two sets of data and found that the estimated land uses for Brazil underwent similar transformations in both, corroborating the accuracy of the published results,” says Ferreira. Geographer Marcos Rosa, technical coordinator at MapBiomas, who is not part of the team that wrote the scientific article, has also praised the method used in the study. “The researchers calculated the statistics of land use changes from these thousand samples,” explains Rosa. “It’s a simple method that has achieved great results for estimating vegetation changes and losses across South America.”

Agricultural commodities
The production of agricultural commodities plays a crucial role in the land use changes observed in South America. According to data from the United Nations Food and Agriculture Organization (FAO), South America produced a quarter of the world’s soy in 1985, the first year analyzed by the study. In 2018, the last year observed by Zalles’ team, the continent produced more than half of the global total. The region is also home to the largest number of cattle, which demand huge areas of pasture. Some researchers claim that it is possible to expand agriculture in Brazil without deforestation. Data from the Brazilian Institute of Geography and Statistics (IBGE), however, indicate that this has not happened. Between 2000 and 2018, the agricultural area in the country increased by 45% and managed pastures grew by 27%. In the same period, according to the IBGE, the rainforest decreased by almost 8% and grassland vegetation fell by 10%.

Zalles is concerned about the rate at which the area occupied by these biomes is declining, especially because countries like Brazil have not implemented effective environmental preservation policies. “The reduction in deforestation rates in Brazil between 2004 and 2012 set an example for other countries,” says the researcher. “However, to truly preserve forests and other natural biomes, this progress needs to be continuous and lasting.”