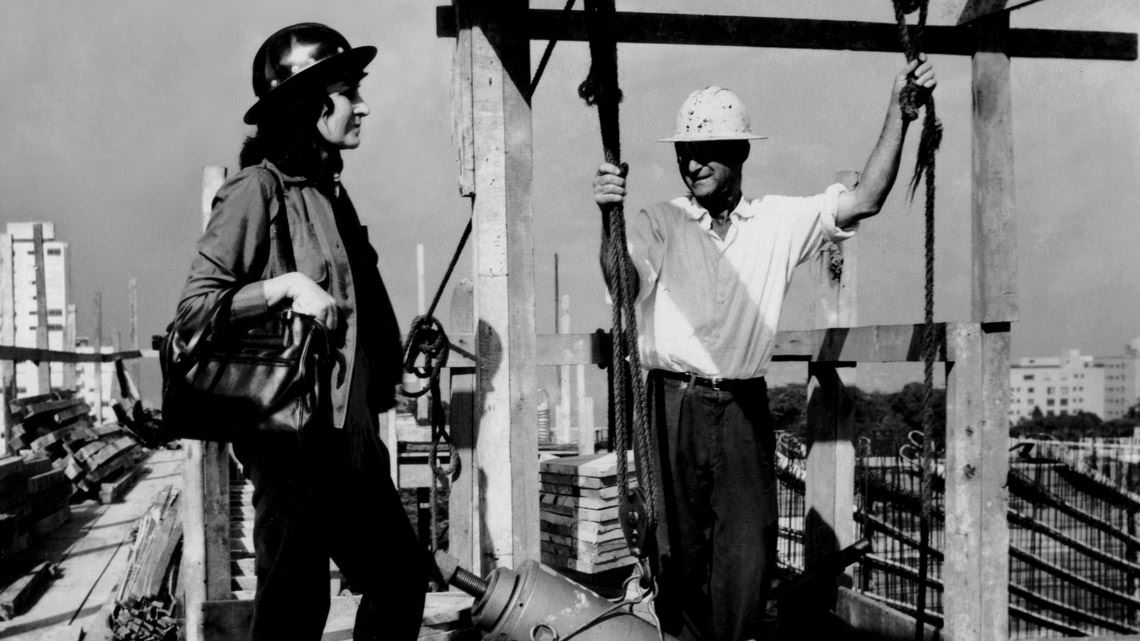 Lina Bo Bardi in the 1960s, while visiting the São Paulo Museum of Art construction site on Avenida Paulista

She is the author of iconic projects such as the São Paulo Museum of Art, known as the MASP. She worked in other fields outside of architecture, such as design and scenography, but wasn’t always recognized for her achievements. At various times throughout her life, she was ostracized due to xenophobia and gender exclusion. Details like these, from the personal and professional life of Italian-Brazilian architect Lina Bo Bardi (1914–1992), are brought into focus in two recently released biographies: Lina Bo Bardi: O que eu queria era ter história (What I wanted was to have a story), by Zeuler R. Lima (Companhia das Letras), and Lina: Uma Biografia (Lina: A biography), by Francesco Perrotta-Bosch (Editora Todavia).

Known for her audacious and irascible temperament, Achillina Bo grew up in Rome in a close relationship with her father, Enrico, a builder and amateur visual artist. “It was through her father that Lina learned to draw,” says Perrotta-Bosch, a doctoral candidate at the School of Architecture and Urbanism at the University of São Paulo (FAU-USP) and at the Università Iuav di Venezia, in Italy. In 1939, a young Lina Bo graduated in architecture from the Regia Scuola Superiore di Architettura, in her hometown. “Her mother, Giovanna, called her daughter ‘contrarian’ for not fitting into the patriarchal standard of the submissive woman destined for domestic services,” says Lima, a professor at Washington University in Saint Louis, Missouri, United States.

After graduation, Lina Bo moved to Milan and went to work for various periodicals. She did a bit of everything, illustration, graphic design and layout, and even edited several issues of the architecture magazine Domus, which is published to this day. In 1943, while verifying an article in Rome, she met the journalist, art dealer, and art critic Pietro Maria Bardi (1900–1999). The couple married some three years later. According to the biographies, Pietro Bardi did not have optimistic career prospects in post-war Italy: to those on the Left, he was marked as a fascist due to his associations during the 1930s with dictator Benito Mussolini (1883–1945). The Right, in turn, viewed him with some reservation due to his published opinions, which were eventually censored by the Mussolini regime itself. 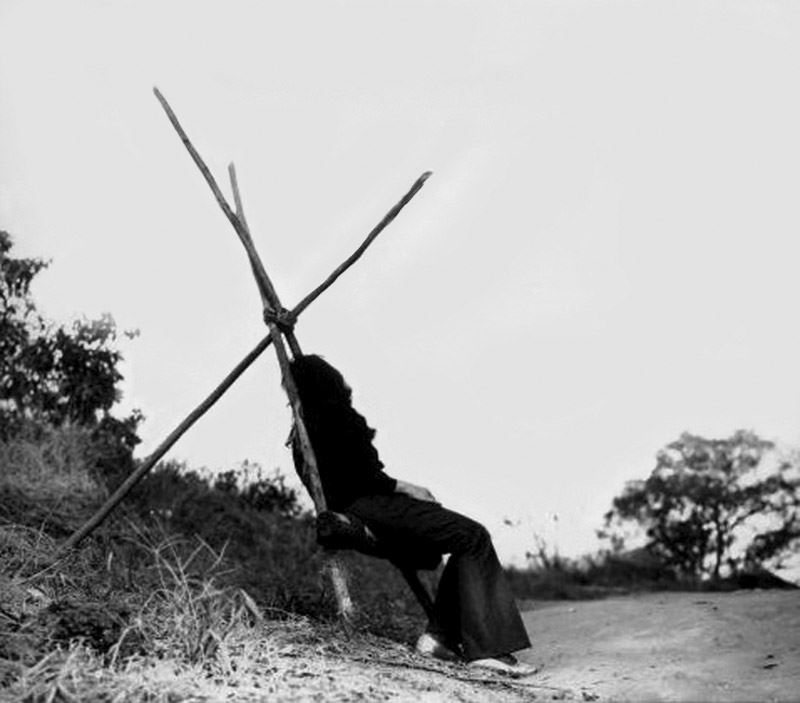 Lina sits on one of her inventions: The Roadside Chair (1967)Instituto Bardi Collection

The Bardis arrived in Brazil in 1946. At one of their first exhibitions in Rio de Janeiro—a showing of Lina’s work promoted by Pietro—they met Assis Chateaubriand (1892–1968), owner of the media conglomerate Diários Associados. At Chateaubriand’s invitation, they moved to the city of São Paulo with the goal of creating a cultural and artistic institution. Among other functions, Lina was responsible for adapting a space in the Diários Associados building on Rua Sete de Abril in downtown São Paulo, to house the first São Paulo Museum of Art (MASP), which was initially limited to the building’s second floor.

Inaugurated in 1947, the museum aspired towards a certain eclecticism, which matched Lina’s multifaceted profile. One of the initiatives spearheaded by the new institution was Habitat: Revista das Artes no Brasil (A review of the arts in Brazil), which the architect directed for three years, beginning in 1950. She was also a professor at the Institute of Contemporary Art (IAC), which operated between 1951 and 1953 with the goal of becoming an industrial design school, an unprecedented initiative in Brazil at the time, since the first design courses would only appear in the country during the 1960s.

While researching her biography, Perrotta-Bosch says he came across more than a hundred theses and dissertations on Lina’s work, published not only in Brazil, but also in countries like the United States and Germany. “They’re all posthumous works, produced from the 1990s onwards,” the biographer notes. In the assessment of architect Marcelo Suzuki, one of Bardi’s closest assistants, she didn’t receive the recognition she deserved during her lifetime. “She was an outcast, she was seen by many as merely an eccentric foreigner,” observes Suzuki, a professor at the Institute of Architecture and Urbanism (IAU) at USP São Carlos.

According to her biographers, this perception began to change in 1993, with the book Lina Bo Bardi (Instituto Lina Bo e P. M. Bardi) authored by Suzuki, with André Vainer and Marcelo Ferraz, who were also assistants to the architect. The work was followed by a documentary of the same name in 1993, directed by Aurélio Michiles with a screenplay by Isa Grinspum Ferraz, and by a traveling exhibition that toured the American, European, and Asian continents for eight years. Everything was organized by the Instituto Bardi, which curates and protects the couple’s legacy. Lima, who has previously organized exhibits on Bardi’s work in countries like Norway and Japan, observes that “Currently, Lina enjoys a growing international reputation.”

A floorplan for the Teatro Oficina renovation project. The work dragged on for 14 years until it was completed in 1994Instituto Bardi Collection

This assertion was confirmed last May by the announcement that Lina Bo Bardi had been awarded a posthumous Golden Lion award for lifetime achievement during the 17th International Architecture Exhibition at the Venice Biennale. It had been scheduled for 2020 but took place this year due to the pandemic. Suzuki believes the architect would have been pleased with the honor, “although she hated self-promotion.” “But beyond the awards, what matters is the fact that today Lina’s work is taught in schools of architecture, which wasn’t the case in the past. I think this also has to do with the increase in female empowerment over recent years,” he adds.

Bardi’s biographies indicate that her academic career was brief. In 1955 she became a professor at FAU-USP, but her temporary contract expired at the end of the following year and wasn’t renewed. “Shortly afterwards, in 1957, Lina took a competitive exam for the position of full professor but was rejected on the grounds of not having a diploma, which she said had been lost in a bombing in Milan during the war,” says Lima. During the second semester of 1958, the architect was a professor at the Federal University of Bahia (UFBA). “Lina’s arguments were not always accepted by the more established professors at UFBA,” says Perrotta-Bosch. “After that, she never went back to teaching.” 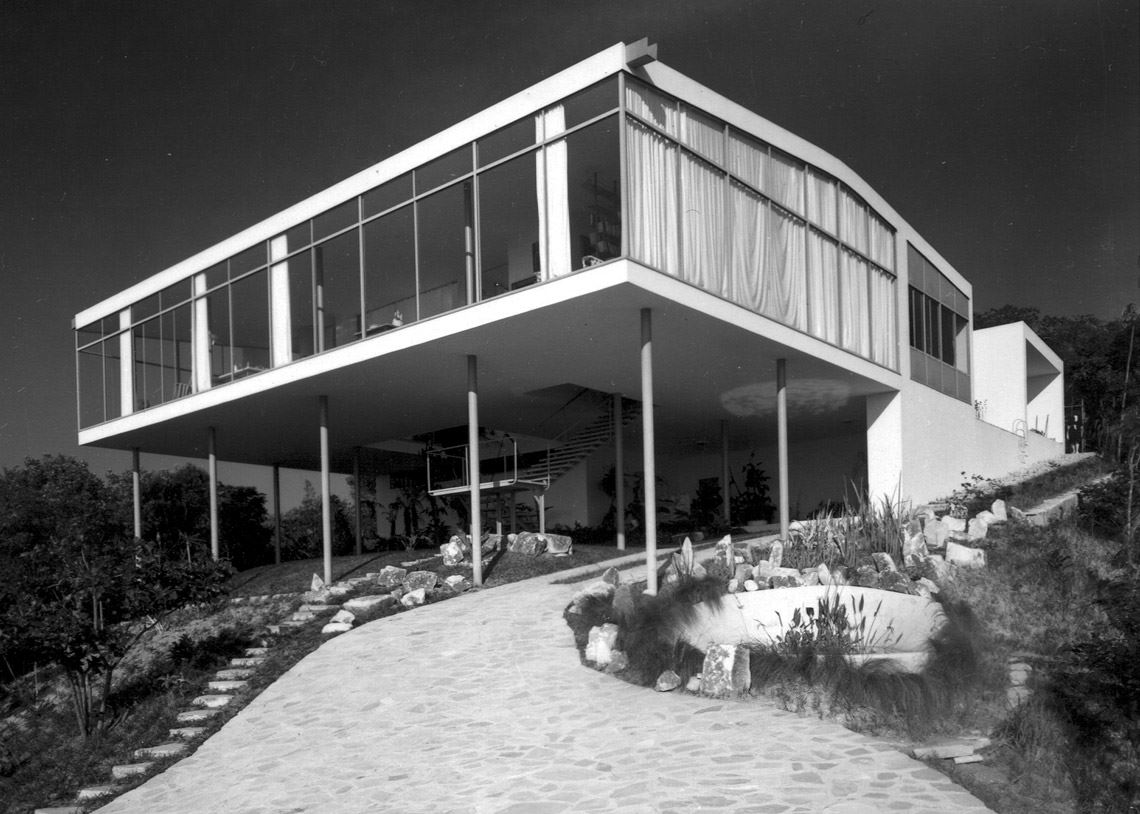 On the other hand, the architect left a valuable trove of writings, recalls Silvana Rubino, a professor at the University of Campinas (UNICAMP) and one of the editors of the book Lina por escrito – Textos escolhidos de Lina Bo Bardi (Lina in writing: Selected texts by Lina Bo Bardi) (Cosac Naify, 2009). “She wrote a lot, from expert opinions provided to government agencies to articles she published in magazines, and even unpublished manuscripts. One could say that these texts are her academic legacy, in which she reflected, among other things, on Brazilian architecture and the country itself.”

Lina Bo Bardi’s relationship with the city of Salvador was not limited to her stint at UFBA. Beginning in 1960, she directed the Museum of Modern Art of Bahia (MAMB), then located in the foyer of the Castro Alves Theater, and directed the restoration of the Solar do Unhão (Unhão mansion), the principal building in a historic complex first occupied in the seventeenth century. There, she installed the Museum of Popular Art and planned to build the Center for Research and Artisanal Craftwork (CETA), but the project fell through. Disagreements with Salvador’s elites, especially Odorico Tavares (1912–1980), Chateaubriand’s right-hand man in Bahia, drove her to leave the city soon after the 1964 coup d’état. 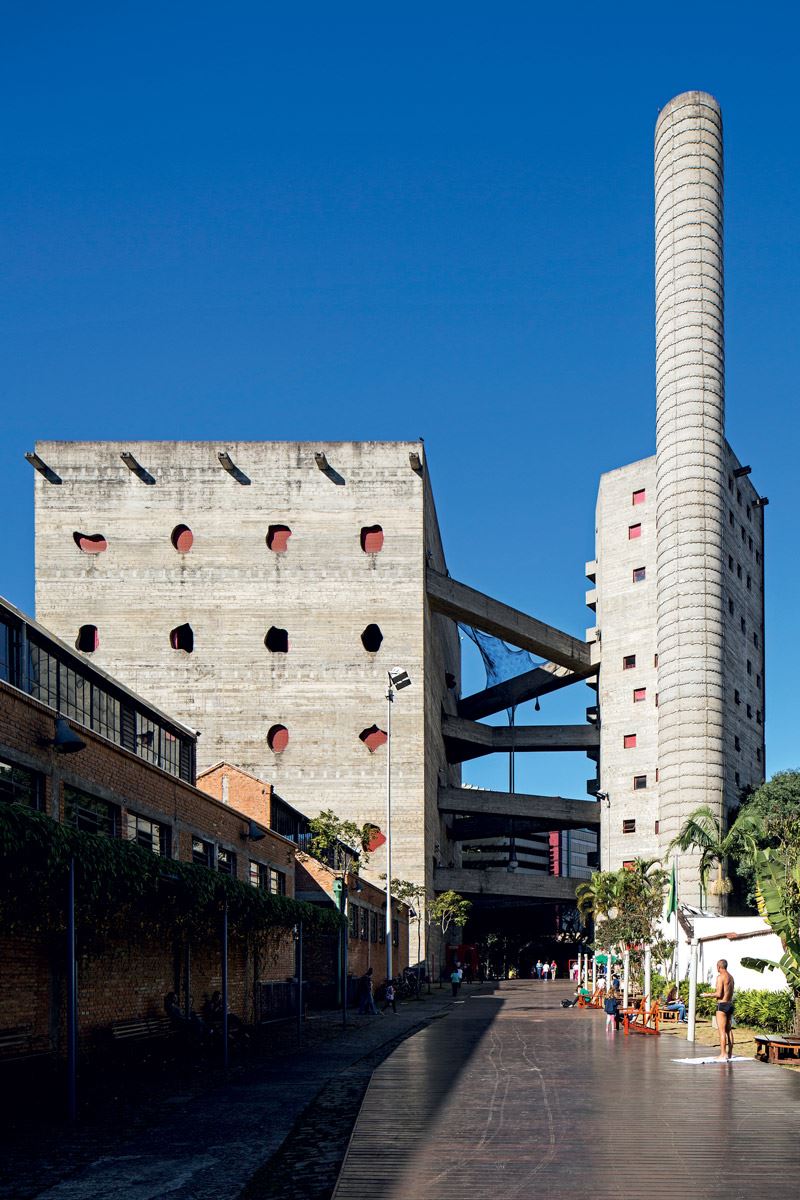 Lina then began to devote herself to building the current MASP headquarters, inaugurated in 1968 on Avenida Paulista. This period also marks the beginning of her work with the Oficina Theater group, initially as a set and costume designer. Later, working in partnership with architect Edson Elito, she would direct a protracted renovation project for the troupe’s headquarters, inaugurated in 1994, 14 years after it started. “Lina used to say that she didn’t do scenography, but scenic architecture, since she contemplated the stage as a whole,” points out Evelyn Furquim Werneck Lima, from the Federal University of the State of Rio de Janeiro (UNIRIO) and co-author of the book Entre arquiteturas e cenografias: A arquiteta Lina Bo Bardi e o teatro (Between architecture and scenography: Architect Lina Bo Bardi and the theater) (Contracapa, 2012). “When the Oficina Theater staged Brecht’s In the Jungle of Cities in 1969, she brought in rubble generated by the construction of the elevated avenue known as the Minhocão [giant earthworm] and deposited it onstage. The project was associated with the military government, which had destroyed dozens of blocks in Bexiga, the neighborhood where the theater is located.”

Amid the country’s intensifying political repression, the architect was denounced by the military regime in 1968 for having allowed her residence to be used for meeting that counted, among its participants, the communist guerrilla Carlos Marighella (1911–1969). “She only lent her house out at the request of a friend, but didn’t attend the meeting herself,” says Perrotta-Bosch. “Lina spent eight months in Italy. The pretrial detention order issued against her was revoked when she returned to Brazil in August 1971 and presented herself to the military justice authorities.”

Bardi’s ideological orientation is a point of contention among her biographers. Perrotta-Bosch writes that she was a communist: she attended communist meetings during the Italian Resistance of World War II and “vehemently declared herself, to the end of her life, to be a Stalinist.” In Lima’s view, however, Bardi loved to stir up controversy with her outspoken comments. “She called herself a Stalinist and antifeminist as a provocation and created a lot of stories around herself,” he says. “Lina had a keen sense of social justice, but she was never a communist.”

The MASP in a 1969 photo. For the architect, the museum’s open space is a “’nothing’, a search for freedom, the elimination of obstacles, the ability to be free in the presence of things”Hans Gunter Flieg / Instituto Bardi Collection

In 1977, the architect—who had been stymied by xenophobia and gender exclusion—received a commission to design the SESC Pompeia headquarters in São Paulo. By ostracism and “She didn’t have a business office and until then had been in the shadow of Bardi and Chateaubriand,” says Renato Anelli, from IAU-USP, in São Carlos. The project, which lasted until 1986, renovated the industrial warehouses of an antiquated barrel factory and added two towers to house the unit’s sports center. “The project is a synthesis of Lina’s thought, which produced modern architecture without breaking with popular culture,” adds Anelli, who is an adviser for the Bardi Institute.

Thanks to the project’s positive repercussions, the architect returned to Salvador in 1986 at the invitation of the municipal government, to carry out a series of interventions in the city’s historic center. “Lina established restoration paradigms that are still very valid today,” says architect Nivaldo Vieira de Andrade Junior, a professor at UFBA. “She was able to intervene in heritage sites with an architectural language that was contemporary, but at the same time very respectful of the place’s history.”