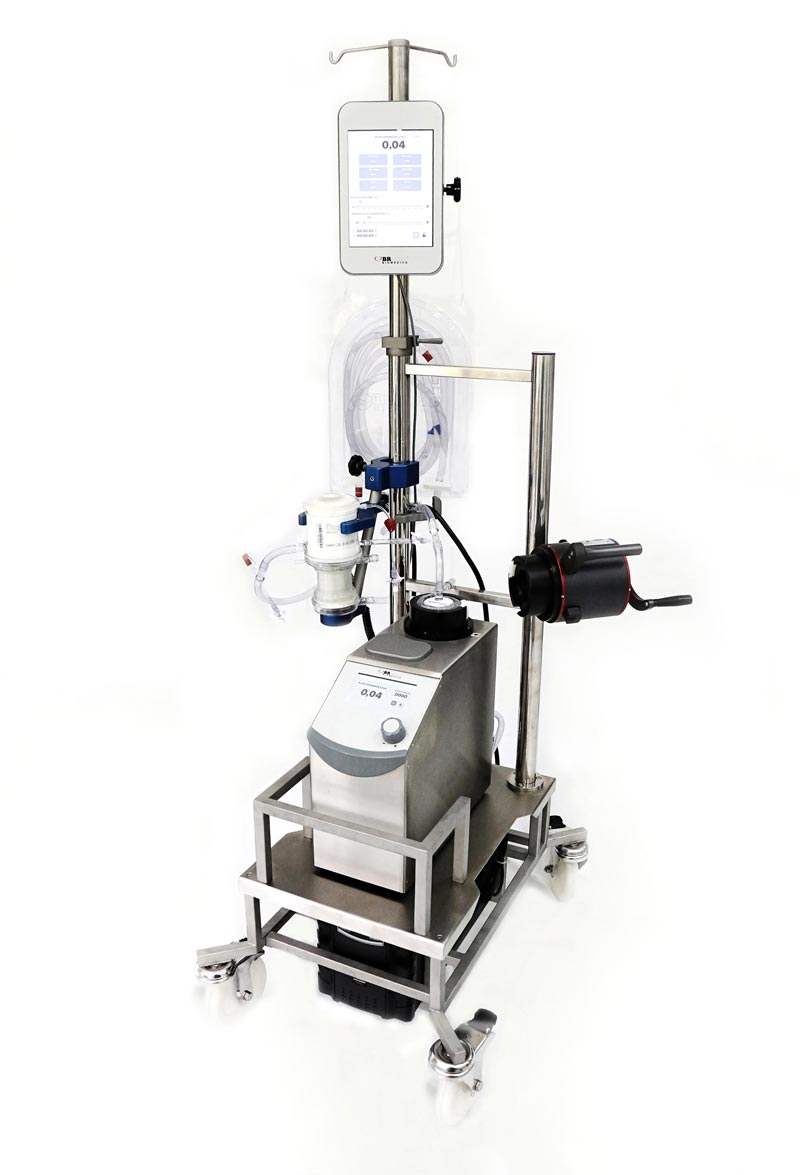 Braile Biomédica, a Brazilian firm that has pioneered the development of medical equipment for cardiology, recently launched a high-complexity device that can help treat patients suffering from acute respiratory failure, a common complication in severe cases of COVID-19. The system, dubbed Solis, is designed for a type of therapy known in the medical field by the acronym ECMO, or Extracorporeal Membrane Oxygenation. The device supports out-of-body breathing as a last resort when mechanical ventilators have failed to help.

“It functions as an artificial lung and can be used in both adults and children,” explains Rafael Braile, operations and research and development director at the Brazilian manufacturer, based in São José do Rio Preto (SP), southeastern Brazil. “The machine pumps blood from the patient’s body via catheters, adds oxygen to it using a polymeric membrane, then sends the blood back to the patient. It’s an invasive life-support treatment that can help keep patients alive until their lungs recover.” ECMO machines can also be used temporarily as an artificial heart by patients who have had a heart transplant, a heart attack or cardiac arrest.

Braile Biomédica developed the system in less than a year with technical support from the Eldorado Research Institute in Campinas (SP), run by the Brazilian Agency for Industrial Research and Innovation (EMBRAPII). The project received total funding of R$7.8 million, including R$2.3 million paid in equal parts by EMBRAPII and Braile, R$2.5 million provided by the São Paulo Development Agency (Desenvolve SP), and R$3 million provided by the Brazilian Development Bank (BNDES).

Founded by heart surgeon Domingo Marcolino Braile (1938–2020) in 1977 (see Pesquisa FAPESP issue no. 176), the company—which has also received funding from the Research for Innovation in Small Businesses (RISB, or PIPE in the Portuguese acronym) program to develop a peripheral stent (used to treat narrowing or blockage in blood vessels)—has extensive expertise developing similar equipment. “We’ve been producing oxygenation membranes for heart surgery since the 1990s. These membranes also function as lungs but for a shorter a period of time, around 6 to 8 hours. The Solis ECMO system uses a similar concept, but is designed to be used for 30 days or more as patients recover cardiorespiratory function in an ICU [Intensive Care Unit],” says Braile, noting that his company’s machine is the first ECMO system developed in the southern hemisphere.

The technology Braile has developed is state-of-the-art, says Luiz Fernando Canêo, a pediatric heart surgeon at the University of São Paulo School of Medicine’s (FM-USP) Heart Institute (InCor). “Their machine should be able to compete with counterparts on the global market. All ECMO machines in Brazil are currently imported, so the Solis system provides an added option,” says Canêo, who has formerly chaired the Latin American chapter of the Extracorporeal Life Support Organization (ELSO).

The ECMO market is currently limited to around a dozen manufacturers, including Getinge in Sweden, Medtronic in Ireland, and LivaNova in the UK. Canêo reckons the Brazilian-made system is on a par with its foreign competitors, at least in theory. “Clinical experience will tell how well it operates.” ECMO machines cost between US$35,000 and US$50,000 on the global market—Braile has not disclosed how much its Solis system will cost.

A single unit has been purchased by a medical equipment distributor in Pernambuco. “We’ve been approached by potential buyers in several Brazilian states and other countries, and we’re currently in advanced talks with healthcare providers in Germany and Ukraine. Institutions in Colombia and Venezuela have also shown interest,” says Braile.

ECMO machines consist of essentially two separate parts. The first is the machine proper, which controls blood flow parameters (volume, pressure, and temperature) and pumps blood out from and then back into the patient. The other is an assembly of disposable parts: two cannulas to channel blood to the machine then back into the patient; a set of tubes through which the blood circulates; a centrifugal pump; and the membrane oxygenator, which adds oxygen and removes carbon dioxide like a human lung. The disposable parts are replaced with every new user.

“Ours is the only ECMO system that is entirely supplied by the manufacturer. Our main competitors outsource some components from other suppliers,” says Braile. ECMO therapy was extensively and successfully used during the H1N1 outbreak in 2009, says the executive, and is similarly being used in Europe and the US to treat COVID-19 patients. “The mortality curve in these countries has been milder. We hope our system can help to save lives during the novel coronavirus pandemic,” says Braile.

As a costly and complex procedure that requires highly trained medical staff—“and which is often not covered by health insurance,” notes Canêo—few hospitals in Brazil are equipped to provide ECMO. “Only 28 healthcare providers are members of and report on their activities to ELSO,” says Canêo, noting that there also several non-members in Brazil using ECMO therapy.

Canêo hopes a natively developed solution could help to expand availability of ECMO treatment in the country. “As a standard practice, hospitals here in Brazil often do not purchase and own their medical equipment, but instead use an equipment-as-a-service model and only purchase the disposal parts. In other Latin American countries, hospitals typically buy the complete system,” he explains. “But without the need for imported spare parts, a locally manufactured machine will be easier to maintain, and this could lead to a change of culture.”