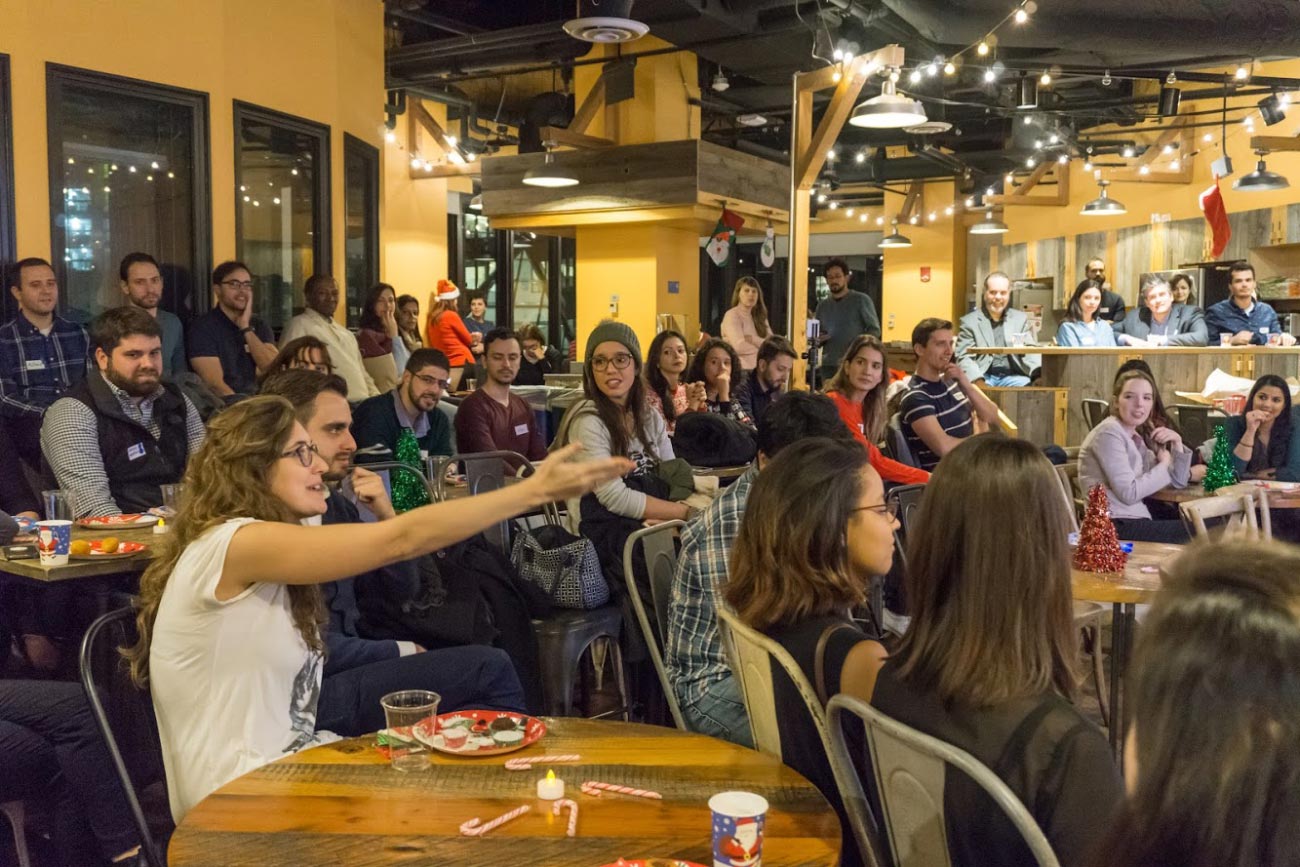 Brazilian researchers and students who live in, or spend time in, the United States have found a way to keep in touch and encourage collaboration: they participate in networks that promote regular meetings to exchange professional, scientific, and entrepreneurial experiences. The first such initiative was launched in 2010. It’s called PUB Boston, an acronym for Brazilian Researchers and University Students in Boston, a network created to engage scientists and scholars from Brazil residing in the New England region. More than 50 institutions for research and higher education are located in the area, such as the Massachusetts Institute of Technology (MIT) and Harvard, in Boston, and Yale, Dartmouth, and Brown. PUB Boston stays active promoting monthly interdisciplinary meetings, and at least ten relationship networks with a similar format have emerged in other US cities such as San Francisco, New York, Houston, Seattle, and New Haven—as well as in Montreal, Canada.

The meetings, mostly held in Portuguese, usually take place in auditoriums, where the participants of the networks attend lectures by Brazilian researchers from a variety of fields, and hear reports from professionals based in the United States who work in companies or are creating startups. There is also an area for presenting socially oriented or science communication initiatives. One particularly rewarding part of the meetings is “happy hour,” where the audience can converse and interact. These are stocked with Brazilian savory snacks and sweets, which are provided by sponsors, or thanks to the organizers’ little collection box.

The audience is made up of students, postdoctoral interns, visiting professors, young professionals, or scientists established in the United States. “The highlight of the meetings is the possibility of learning what Brazilian colleagues from different areas are producing here, and opening doors for professional and personal contacts. But of course we can’t underestimate the interest that the coxinhas [deep-fried chicken croquettes] and brigadeiros [truffles] arouse in Brazilians who have been away from home for a while,” says nutritionist Rachel Freire, a postdoctoral fellow at Harvard Medical School, and the current leader of PUB Boston. 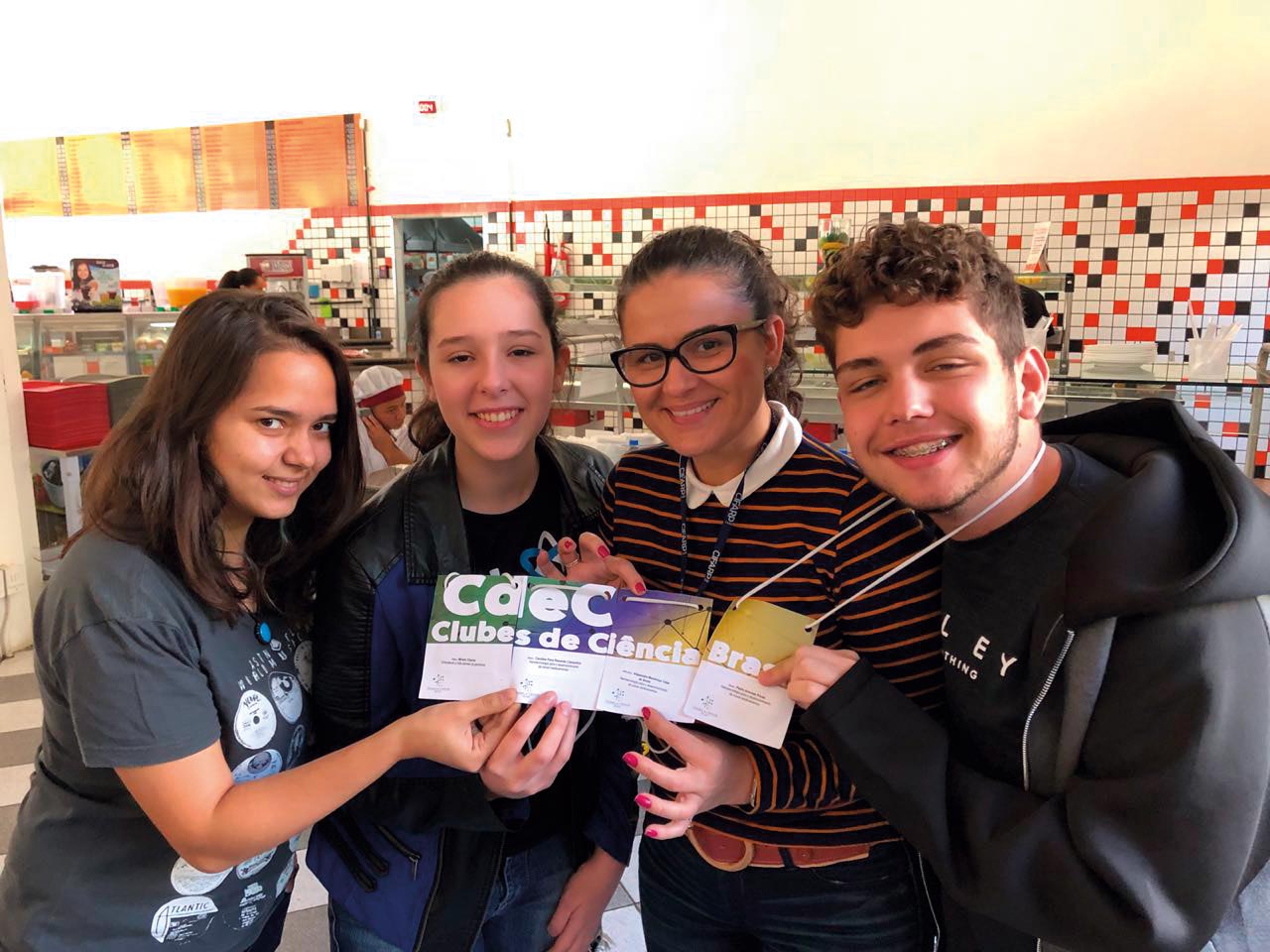 In the case of the New England group, monthly meetings are always held on Fridays. The attendance ranges from 60 to 80 people—and it was even higher until three years ago, when the Science Without Borders program was sending thousands of students abroad. At the last meeting, on December 14, there was a special event with presentations from five master’s and doctoral students from various areas of study at US universities, which was attended by the Brazilian consulate general in Boston, Glivânia de Oliveira.

Through a Facebook group, the network can mobilize 3,700 Brazilians who have spent time in Boston. “It’s not uncommon that out of these presentations—and the debates that take place before and after them—there emerge scientific and professional collaborations,” says computer scientist Vitor Pamplona, coordinator of the SciBr Foundation, an NGO created in 2014 that, among other tasks, coordinates and helps disseminate these networks. “Among various examples, I remember a biologist and an engineer who met at PUB Boston and began to work together on creating a new research device,” says Pamplona, who traded Porto Alegre for Boston in 2009, when he did part of his doctorate at MIT. Seven years ago he created an optical equipment company, EyeNetra, in the city of Cambridge.

The PUB Boston meetings inspired some of its members to recreate a program in Brazil, which was developed in Mexico by Mexican researchers from Harvard. They call them “science clubs,” which are weeklong workshops for high school students and beginning undergraduates, provided by scientists and instructors educated in the United States. The initiative has already been carried out twice in Brazil, both held on the campus of the Federal University of Minas Gerais (UFMG). The selection process was rigorous, with more than 1,000 entries for 80 vacancies at each conference. “The idea is to motivate young people to pursue a scientific career. They get some hands-on experience, and focus on frontier issues like gene editing and stem cells. On the last day, they present what they’ve produced to the public and their families,” says biomedical researcher Bruna Paulsen, currently a postdoctoral fellow at Harvard University’s Department of Stem Cell and Regenerative Medicine, and one of the program’s organizers, along with biologists David Soeiro and Rafael Polidoro, and administrator Marcos Bento. Besides Brazil and Mexico, the project is also being implemented in Colombia, Bolivia, Peru, Paraguay, and most recently, in Spain.

The community of Brazilian researchers in the United States is a well-connected network, says sociologist Ana Carneiro

The networks have also developed strategies for welcoming newcomers, such as the dissemination of manuals available on the internet. Written by various members, they include tips on how to find housing, obtain documents, or use public transport. A guide written by members of PUB Philadelphia, for example, provides the addresses of good supermarkets, and warns of the dangers of turning off the central heating in homes and apartments during the winter—the pipes can’t simply be thawed out once they freeze.

A very productive network emerged four years ago in San Francisco, on the outskirts of the local University of California campus (UCSF). “There had been demands from Brazilian researchers in the region and also from the Brazilian consulate in San Francisco to create a network,” says Tatiana Hochgreb, leader of the initiative. “We held the first meeting at the consulate itself in 2014, which attracted more than 100 people to sign up.” The experience has evolved, and today PUB-Tech-SF has a schedule of four meetings each year, hosted in Stanford, San Francisco, Berkeley, and Silicon Valley. “There’s a mix of regional scientists and business professionals among the speakers—we’ve had talks by professionals from LinkedIn and Canon, for example.” The meetings feature short presentations about social impact projects, such as an initiative that was looking for volunteers to organize science workshops with the Projeto Histórias e Cantigas (Stories and songs project), which holds library events aimed at Brazilian children. “One Brazilian scientist from Stanford spent an afternoon with the children conducting experiments and talking about density,” recalls Tatiana Hochgreb. 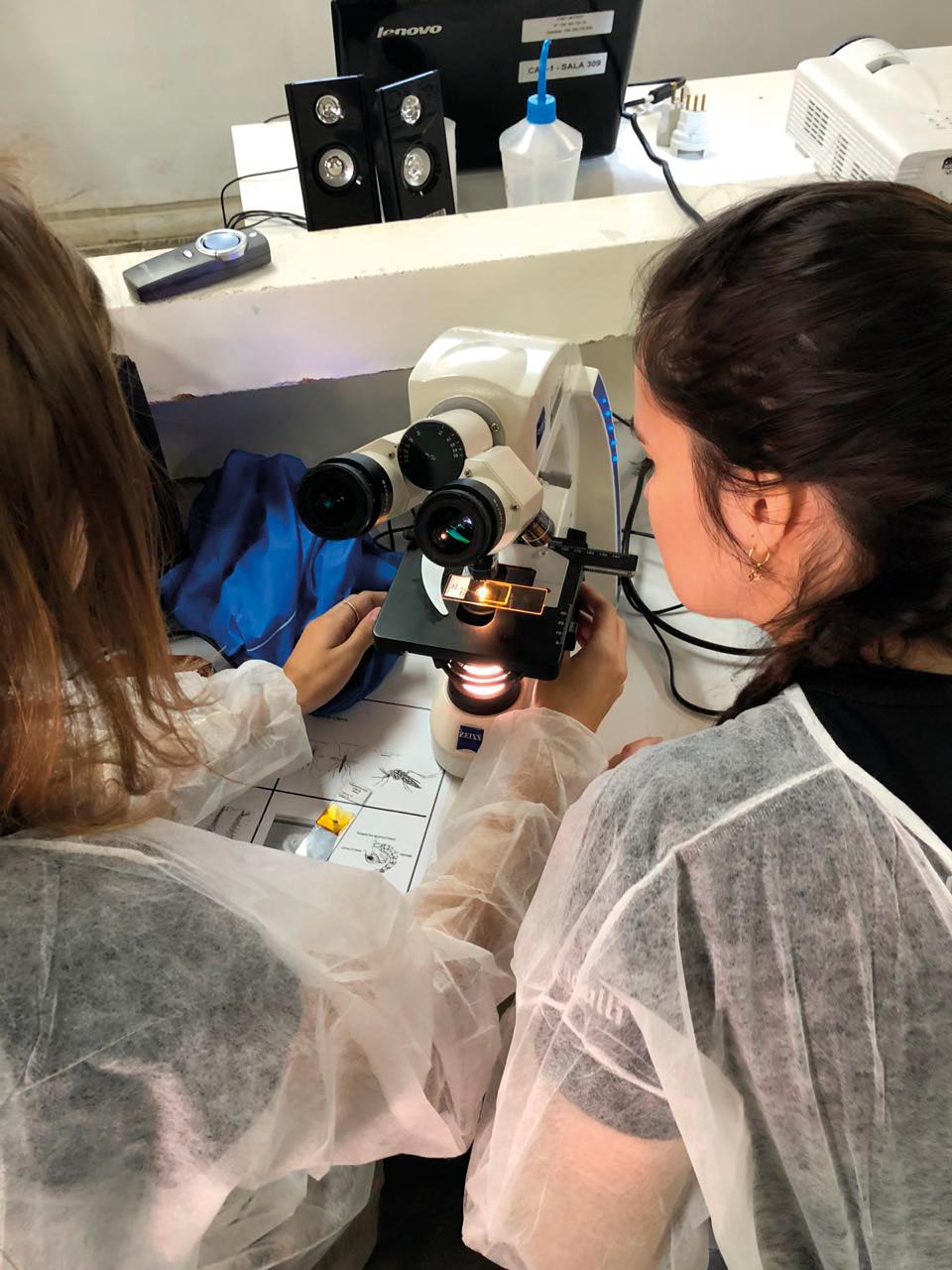 Clubes de Ciência BrasilEducated in molecular science at USP [University of São Paulo], Hochgreb went to the United States in 2005 to do a postdoctoral fellowship at UCSF, later moving to the California Institute of Technology (Caltech) in Pasadena to work in the field of developmental biology. She ended up staying in the United States for family reasons, and in 2015, decided to shift careers. She now works at the Lemann Center at Stanford University, on an education project whose ambition is to redesign curricula to improve science education in Brazilian schools. In her view, the goal of PUB-Tech-SF is to discuss high-level topics and “put a variety of people together” to get to know each other. “The idea is to spread knowledge in an accessible way, demystify science, and raise the level of dialog. People are glad to participate in interesting conversations. Many students and indeed, many people from outside academia who are interested in science go to the meetings, which are open and free.” About 70,000 Brazilians with higher education live in the United States, according to data from the 2010 US Census. Part of this contingent, which includes researchers and highly qualified professionals, work at universities and technology companies. “There’s a large number of Brazilian researchers in the United States and it’s a community that’s well-connected,” says sociologist Ana Carneiro da Silva, a researcher at the Center for Public Policy Studies at the University of Campinas (NEPP-UNICAMP). At the request of the Brazilian Embassy in Washington they will be mapping the “diaspora networks” of Brazilians in the United States, and their role in promoting research collaboration.

Bridges for collaboration
A survey released by the Brazilian Embassy in Washington showed that while PUB networks are based on the exchange of knowledge, other initiatives are dedicated to establishing bridges for collaboration with Brazil. Three such cases are BayBrazil, which promotes exchange between Brazilian companies and Silicon Valley; the Brazilian Expert Network, formed by Brazilian researchers based in the United States and interested in partnerships with Brazil; and Brascon, a contact platform between the Brazilian scientific community in the United States and companies, universities, public agencies, and research institutes in Brazil.

Pamplona observes that most participants in the networks maintain their interest in returning to Brazil after a period of study or work. “They almost always return, due to family issues or an interest in establishing a career in Brazil. It’s not trivial to pursue a career at a company in the United States, where there’s strong competition with professionals from all over the world.” Pamplona estimates that, in recent years, SciBr has been able to refer about 40 Brazilians to vacancies at U.S. companies.

By 2020, the networks of Brazilian researchers in the United States will be mapped, through a project commissioned from the Center for Public Policy Studies at the University of Campinas (NEPP-UNICAMP) by the Embassy of Brazil in Washington. “We’re going to do a survey of who these Brazilians are, where they are, and what they’re doing,” says sociologist Ana Carneiro da Silva, a researcher at NEPP-UNICAMP. She coordinates the project with partners such as Flavia Consoni, from the Department of Science and Technology Policy at UNICAMP, and Elizabeth Balbachevsky, from the Center for Public Policy Research at the University of São Paulo (NUPPS-USP). “The objective is to do an analysis and propose policies to understand how the science of Brazil can benefit from the temporary and permanent residence of highly qualified Brazilians in the United States,” she states. The group will also conduct interviews with researchers based in the United States to understand the dynamics of the so-called “diaspora networks,” and raise initiatives that they deem important for increasing connections with Brazilian science.

The project began to be developed at the end of 2017 during a workshop on the Brazilian diaspora held in Washington, in which the NEPP group participated. Recently, the Brazilian Embassy in London approached UNICAMP with a similar request. As a result, Ana Carneiro and Flavia Consoni are helping to organize a workshop on the Brazilian diaspora in the United Kingdom. The meeting will take place on February 14 during a FAPESP Week London seminar, and will bring together international talent experts to discuss how Brazil can leverage the benefits of having researchers working at institutions in Britain. “It’s known that in many places diaspora networks don’t cause brain drain, but do create advantageous connections for Brazil’s scientific community, since science increasingly works through international networks,” says engineer Euclides de Mesquita Neto, a professor at UNICAMP and adjunct coordinator of special programs and research collaborations at FAPESP.