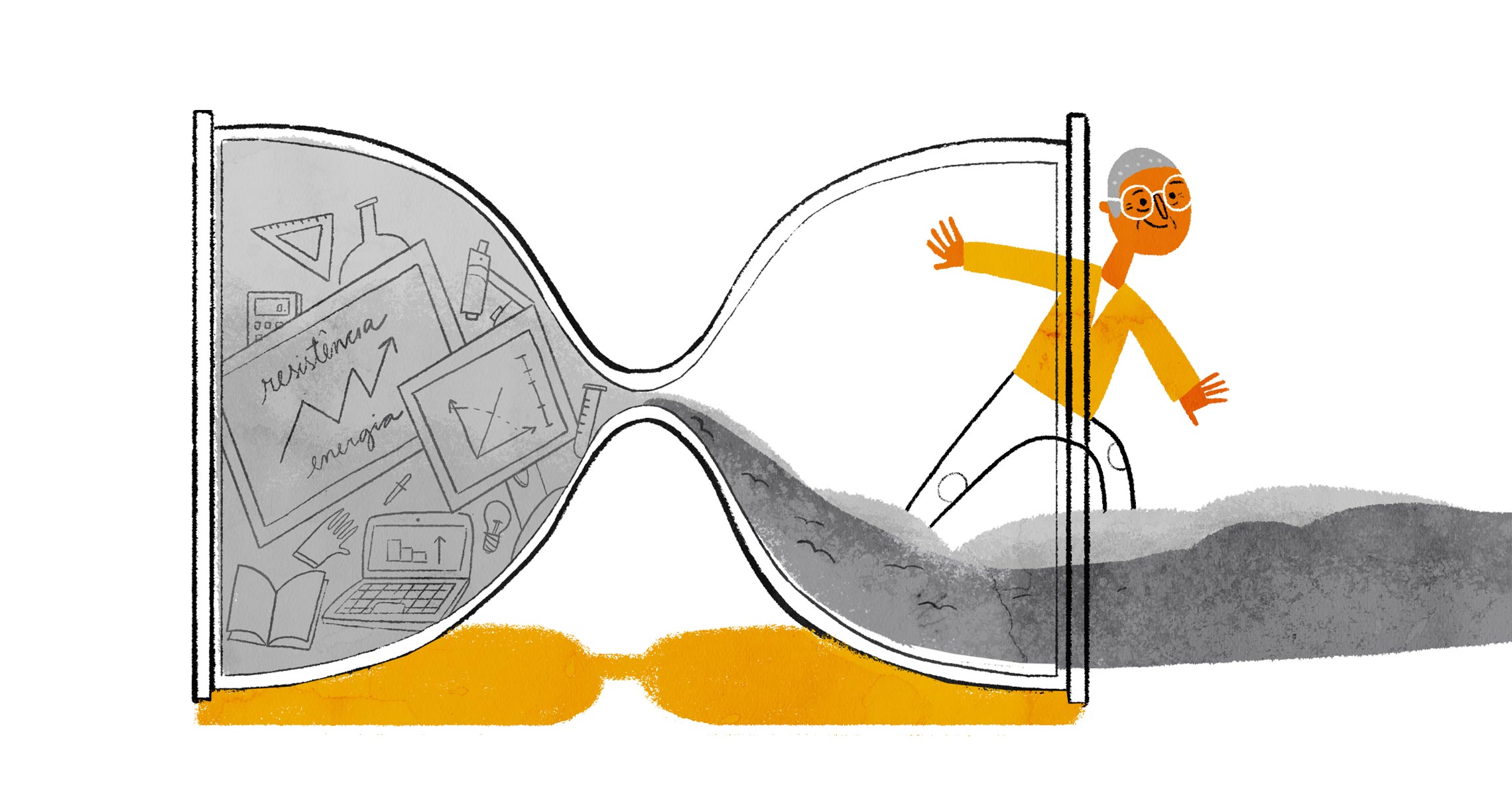 Physicist Maria José Pompeu Brasil had a successful career as a researcher at the Gleb Wataghin Institute of Physics at the University of Campinas (IFGW-UNICAMP) when she decided to retire in 2016. Aged 55 at the time, her great interest was scientific communication. As soon as she retired from the lab, she devoted herself to opening a science museum in Campinas. She wanted to build something similar to American and European institutions, but after a year and a half of meetings and negotiations, the project had made little progress. So she decided to invest her time in another idea. She rented an area near UNICAMP and created the Cyborg Makerspace, a public space for scientific and technological production and dissemination. “Although I enjoyed my work as a researcher, I wanted to do something new and different,” she says. “And I couldn’t just wait until I was older to do that.”

Maria Brasil considers it essential that researchers plan their retirement in advance and invest in personal projects, whether related to their previous university work or not. Retirement is a delicate subject for many researchers. “In general, we perceive intellectual work as a way to maintain our well-being by engaging in valued activities that can be continued well into old age,” explains psychologist Elizabeth Barham, from the Psychology Department at the Federal University of São Carlos (UFSCAR). “This is linked to the satisfaction of collaborating with new professionals and contributing to their training.”

Good retirement planning can help researchers enjoy certain benefits, such as greater choice of how to spend their time without the need to mark exams and attend routine meetings, allowing them to fully focus on their personal projects, as well giving lectures, speaking at conferences, and interacting with university students. Such planning can also help scientists to organize their academic legacy: preparing data, software, laboratory protocols, and course materials so that others can use them in new research. According to Barham, who has been working on the topic for more than 10 years, retirement should ideally be a gradual process, with researchers transferring their projects to other members of the team over time.

There are 11,363 retired university professors in Brazil, according to the 2017 Census of Higher Education. There is no data on the average age they stop working, but one thing is certain: retiring is not only a professional and financial decision, it is also existential. “Scientific work tends to shape the identity of researchers, who see significance and meaning in what they do. It is therefore important that they set aside time during the transition to retirement to review their life plans and identify the changes they want to make and how to stay active in other areas,” says Barham.

Architect Carlos Zibel Costa, a professor at the USP School of Architecture and Urbanism (FAU-USP), took compulsory retirement in 2014, at the age of 70. “I remember being very involved with my research at the time,” he says. “As well as giving classes, I also wrote and worked on various projects.” After retiring, he decided to continue organizing exhibitions and writing texts on subjects related to his previous research in art and culture. He was thus able to maintain contact with former students and colleagues. “I am often invited to give lectures and talks on the ideas that I developed over the course of my career.”

Zibel believes it is important that researchers remain active after retirement. “There is no need to completely cut ties with your academic activities,” he says. “It is possible to stay connected to the research structure that you have helped to create.” Many continue living close to their university in order to use the library or visit friends. “Several of my colleagues developed depression and anxiety after retiring because they were unable to find anything to do that justified their existence or gave them the same level of satisfaction,” he says.

This was the case for electrical engineer João Zuffo, a professor who took compulsory retirement from the USP Polytechnic School in 2009 at the age of 70. “At first, it was a shock,” he says of the sudden change to his daily routine. “You feel sad and frustrated for a while, because you are accustomed to the work and activities of life at university.” Little by little, however, he realized that he could take advantage of his free time to devote himself to the subjects he really wanted to study. “I started working on a book, which I haven’t yet finished, about the effects of technology on different societies since World War II and the outlook for the next 30 years,” he says.

Zuffo had a leading position when he left the institution. “I gradually finished my supervisions and handed over my responsibilities.” He still maintains contact with former colleagues and research groups, and he now has an advisory role in matters related to electronics. “Scientists need to accept retirement naturally and make way for the young,” he advises.

To help researchers in this process, US data scientist Philip Bourne, from the University of Virginia, USA, published an article in PLOS Computational Biology with recommendations on the subject. One is to consider the economic implications of retiring. He recommends that scientists assess their financial situation and estimate how much money they need to retire comfortably. This will allow them to identify whether they need to increase their savings, reduce spending, postpone retirement, or seek part-time employment. “Financial security will allow you to make time for other activities related to your field or otherwise.” 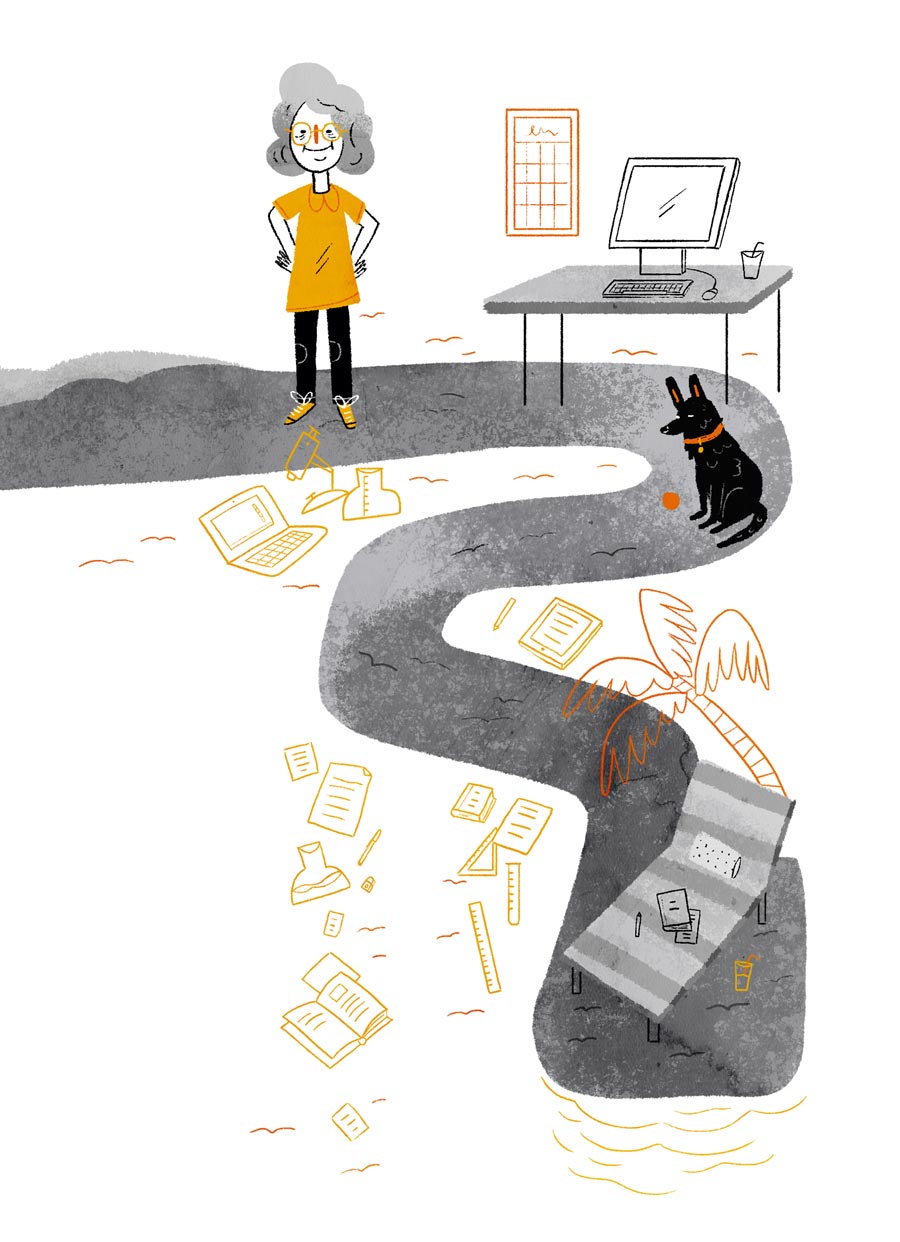 This recommendation is pertinent for the 209,442 professors who work in private higher education institutions in Brazil. Ideally, researchers should start planning for retirement five years in advance, not only to help organize their financial situation, but also to ensure that the transition does not compromise the progress of ongoing research or the careers of other researchers. For professors who work at public higher education institutions, the situation is different.

Until December 1998, retirement requirements in the public sector only took into account the length of service. Elementary school teachers and university professors alike gained the right to full benefits after 30 years of teaching for men, and 25 years for women, regardless of their age. The 20th Amendment to the Constitution added five years to these time periods and introduced compulsory retirement at the age of 70. With the 88th Amendment to the Constitution, passed in May 2015, this has risen to age 75.

The decision to end her scientific career was an easy one for agronomist Maria Auxiliadora de Carvalho. In 2012, at the age of 61, after working at the Institute of Agricultural Economics (IEA) in São Paulo for 34 years, she decided to retire, despite not having reached the compulsory retirement age of 70 years. “I realized that I had already achieved everything I wanted to in my career and that I wanted to spend more time with my family,” she says. Carvalho continued teaching at the Economics Department of Faculdades Metropolitanas Unidas (FMU) in São Paulo until 2017, when her contract ended. “I took the opportunity to retire altogether.”

Maria Brasil is also very happy with the choices she made. In partnership with Claudecir Biazoli, a high-school physics teacher, she is now fully dedicated to Cyborg Makerspace, offering workshops and courses on science and technology topics for audiences of all ages.