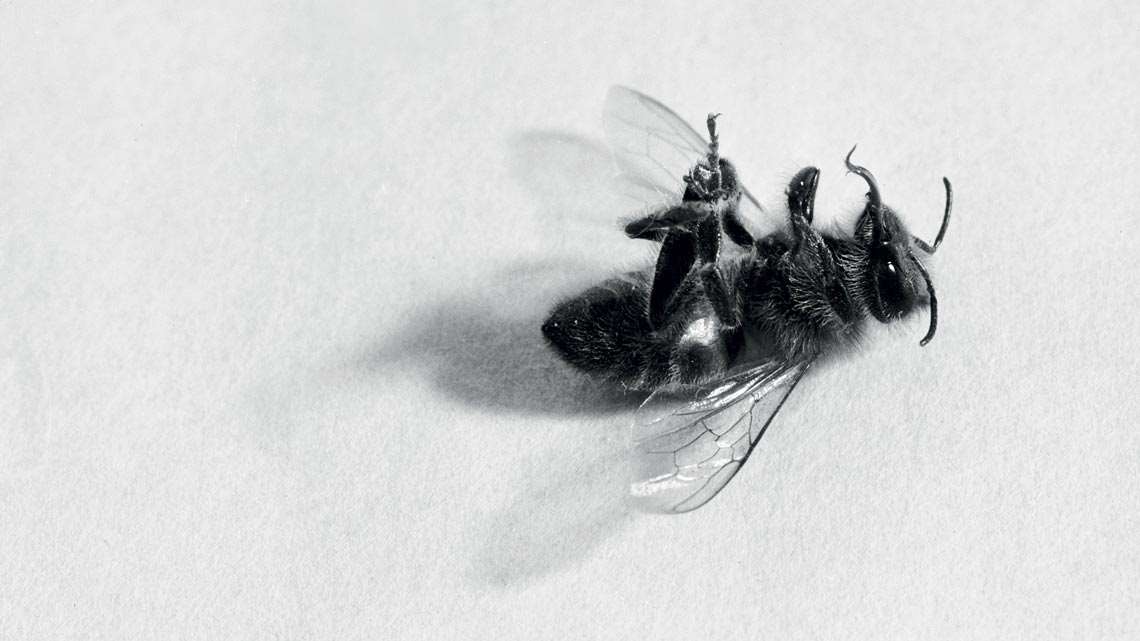 The continued exposure of honeybees of the species Apis mellifera to low doses of a type of insecticide used in plantations, thiamethoxam, changes the function of a group of 52 genes, deregulates the immune system, and makes them susceptible to infections caused by bacteria that are not normally pathogenic to them. Half of the genes, whose activation was altered by continuous contact with the agrochemical, are associated with the production of proteins that would be important for the bees to defend themselves against microbial infections. This is the conclusion of a study, published January 15 in the journal Scientific Reports, by researchers from the Rio Claro campus of São Paulo State University (UNESP) and from the University of Birmingham and the University of Nottingham, both in Britain.

Over 10 days, to simulate the contamination of the bees in the field, the group exposed A. mellifera worker bees to a food with quantities of the insecticide similar to those found in the pollen and nectar of plants exposed to the synthetic compound. Later, the worker bees were infected with the one of two bacterial populations: Bacillus badius, present in the environment, or Ochrobactrum anthropi, found in the bees’s intestines. “We tested in laboratory the long-term reactions sparked by low doses of thiamethoxam,” explains biologist Pâmela Decio, who developed the project with a team of British researchers, during her doctorate at UNESP, and today is completing her post-doctorate at the Federal University of São Carlos (UFSCar). The insects died, sometimes in less than 48 hours. The bees that only had contact with the bacteria, and not the insecticide, were affected very little and fought off infection. The insects do not produce antibodies and depend exclusively on their inborn immune system to fight external agents.

Thiamethoxam is part of a class of insecticides that come from nicotine, the neonicotinoids, widely used in the last three decades to control pests in a plantation, as a spray or to treat seeds. Different from contact pesticides, which concentrate on the surfaces (such as leaves) of the treated plant, neonicotinoids exhibit systemic action. The cultures absorb them, and these compounds spread throughout all parts of the plants. Since the beginning of the last decade, the negative effects of this type of insecticide in wild and domestic bee populations, which are very important for guaranteeing the pollination of agricultural crops, have been featured in various international studies.

In general terms, the projects highlight that high concentrations of some neonicotinoids affect the nervous system of bees and can cause paralysis and death. In 2013, due to growing scientific evidence, the European Union strictly limited the use of this type of insecticide and, in April 2018, prohibited the outdoor use of three neonicotinoids—imidacloprid, clothianidin, and thiamethoxam. In other countries, such as the United States and Brazil, the use of these insecticides is not prohibited.

While the results of the study by Brazilian and British researchers have been obtained in laboratory, and still need field validation through the controlled exposure of the insects to agrochemicals, the project’s conclusions detail one of the molecular mechanisms that are the cause of the damaging effects of thiamethoxam on the bees. “Our article reveals important facts about how the insecticide impacts the health of these insects and can help increase the safety of agrochemicals,” adds molecular geneticist, and one of the authors of the project, Matthias Soller, from the University of Birmingham.

In addition to the use of certain insecticides being associated with the reduction of the bee population, other factors can also contribute to this decline, such as the increase in deforestation in areas of native forest and global warming. “We still do not know which is the primary cause, but all have some influence,” says Decio.

Despite not being prohibited in Brazil, neonicotinoids have been used very rationally in recent years in domestic plantations, according to zoologist Osmar Malaspina of UNESP, Decio’s PhD advisor and one of the authors of the thiamethoxam project. “In the beginning, the insecticide manufacturers tried to defend the idea that there was no relationship between bee mortality and their products,” recalls Malaspina, expert in the behavior of social insects. “But our studies, and those of other groups, show that insecticides were the key cause of the death of hundreds of colonies in a period of one to two days.”

The researcher from UNESP said that today the application of agrochemicals by air is very controlled, made in lower doses, and ensures the compound does not reach the forests surrounding the plantations. Releasing the product far from forests, more than 500 meters for example, significantly reduces bee mortality. Another technique that minimizes the impact of insecticides on bee colonies is avoiding spraying at times when the insects commonly visit the plantations.

“We study melon production in a region of the Northeast and we see that bees pollinate the fruit between 6 a.m. and 7 a.m.,” says Malaspina. “The producers, therefore, stopped insecticide application using planes during the day and began to use tractors to spray only in the early morning, before the bees arrive.”

The preservation of insects that are vital to agricultural production, such as bees, is experiencing cultural and structural changes. “Our farming of key commodities, such as soy, cotton, and corn, is completely based on a wide range of monoculture farming, and pest control generally depends on the application of preventative chemical products,” explains ecologist Carmem Pires, from the EMBRAPA Genetic Resources and Biotechnology, of Brasília. “Practicing the principles of integrated management and using biological pest control is the key challenge we face in these areas.”