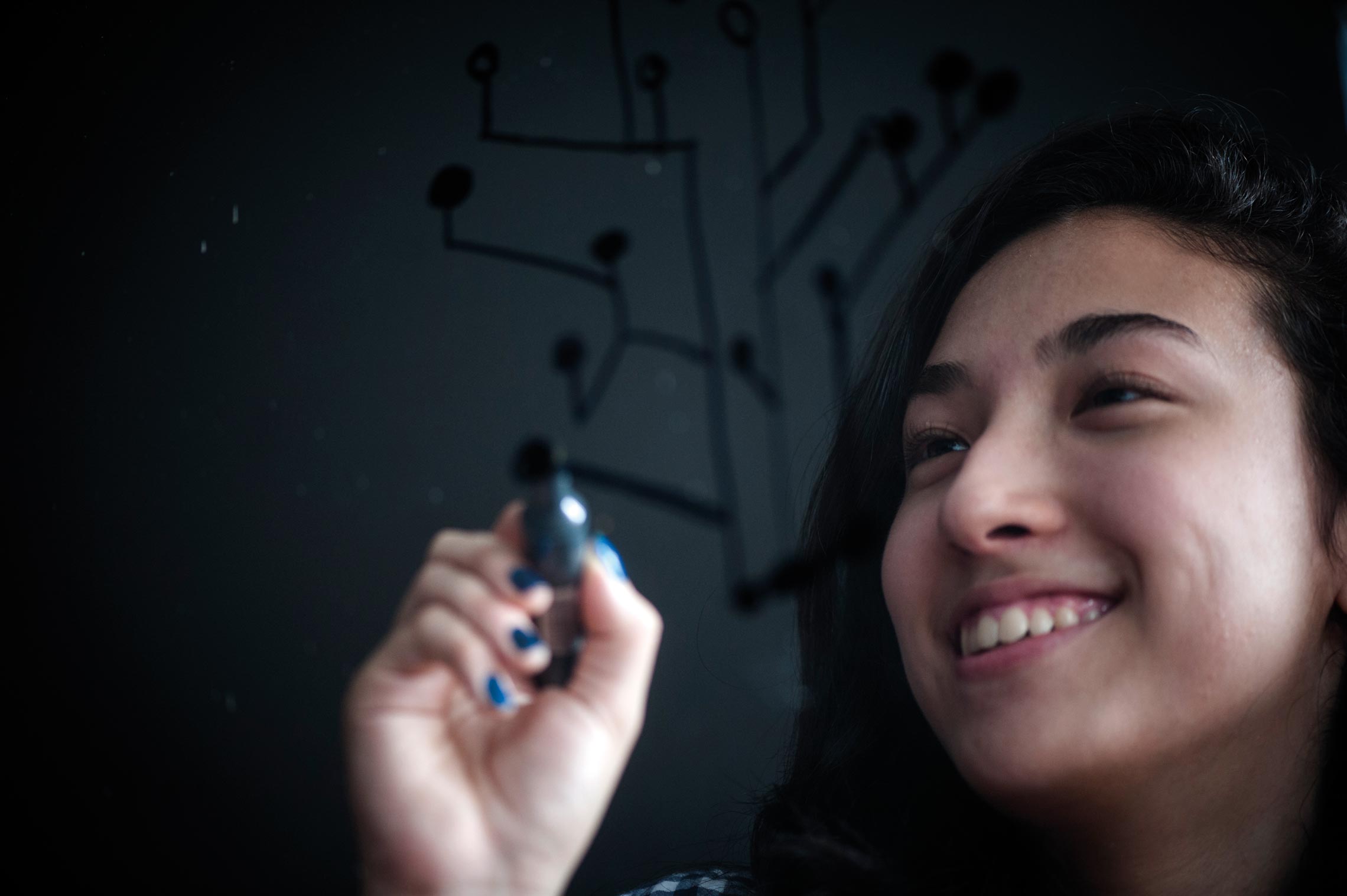 Mariana Bagni, 17, earned admission to the electrical engineering program at UNICAMP for her strong record in international robotics competitions

Mariana Bagni, a 17-year-old student in São Paulo, has spent much of her free time over the last three years tinkering with electronic circuits and structures to build robots. She has always loved mathematics and technology, and initially aspired to compete in the high school category of the Latin American Robotics Competition. Her effort was rewarded with a first-place trophy in the contest in 2017. As a high school student in São Paulo, she and her classmates developed robots that can play piano, fight against light rays, and dance. Last year their prototypes won a silver medal in a robotics competition in Canada. With this impressive record, Bagni was waived past the entrance examination and admitted this year to the electrical engineering program at the University of Campinas (UNICAMP), through an initiative offering university spots to medalists in science competitions. “UNICAMP is a leading university in many fields, so without a second thought I applied through the new selection process,” says Bagni.

The system UNICAMP is introducing for the first time in Brazil is one of several admission pathways being implemented at the university. The new form of entry, called Competition Admission, offered 90 spots this year for students demonstrating outstanding performance in high-school Science, Technology, Engineering, and Mathematics (STEM) Olympiads, including math, robotics, and chemistry competitions. Most openings are in exact science and engineering programs. A total of 285 medalists in 15 STEM competitions—mostly in the Brazilian Maths Olympiad for Public Schools (OBMEP)—applied for admission. A scoring system based on student performance in the competitions was used to select successful applicants. Only 66 of the 90 available places were filled in this first, experimental admissions round. “As anything being attempted for the first time, there are challenges and lessons to be learned in the process,” analyzes José Alves de Freitas Neto, admissions coordinator at the university. 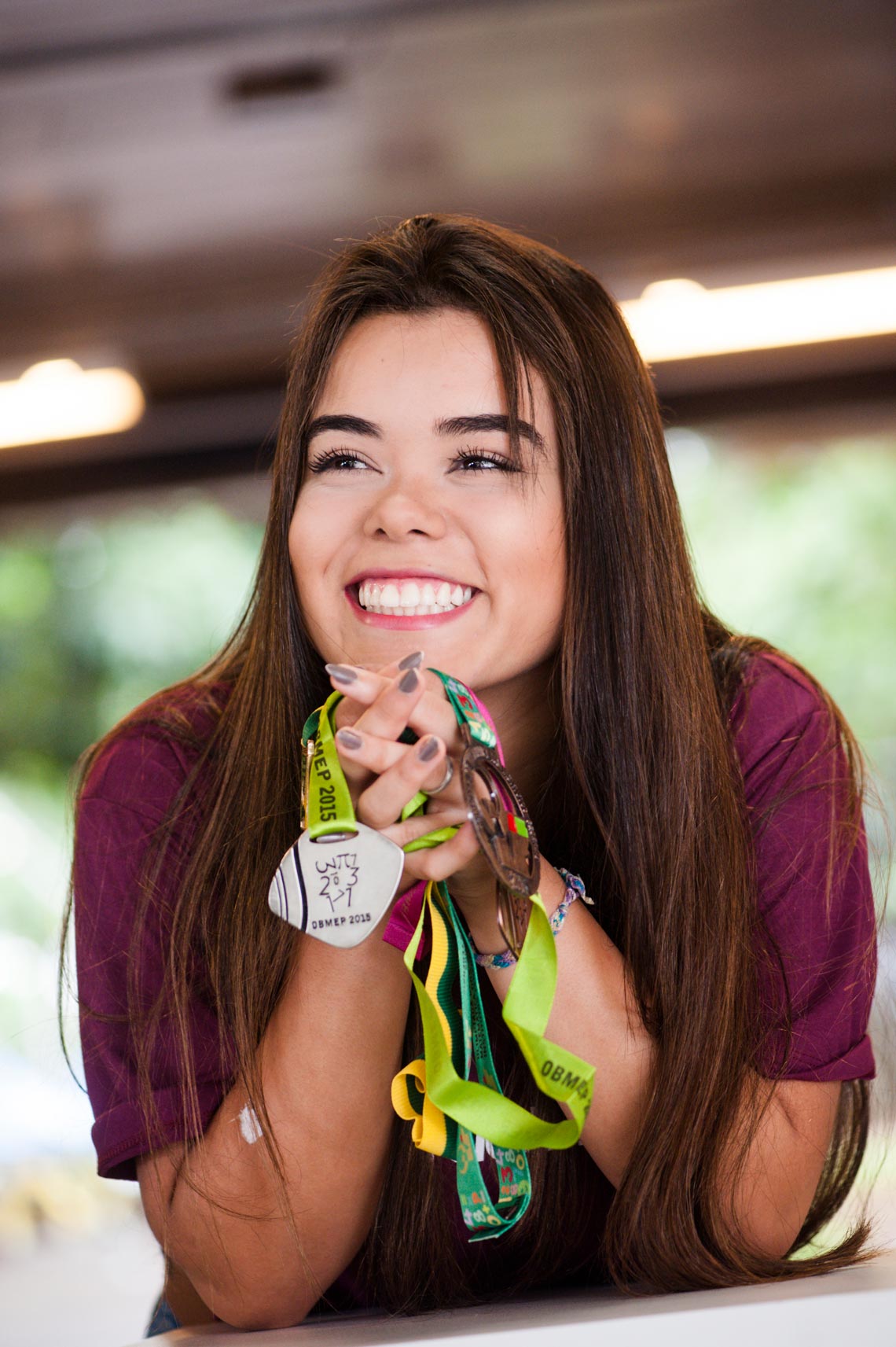 Gabriely Camilo, of Jacutinga, Minas Gerais, earned her way into university with medals in physics and math competitionsLéo Ramos Chaves

UNICAMP believes that recruiting medal winners can help to enrich and diversify the academic environment. These applicants are typically high achievers who are used to long hours of study and challenges—some of these competitions are based around projects—and have the potential to become future researchers. The strategy is also expected to be beneficial in containing dropout rates, which between 2004 and 2011 were as high as 20% of students in the first three years of university. “The talents we’re recruiting will probably be more likely to complete their degrees and move on to research in the future”, says Freitas Neto. Four out of ten come from public schools. “One of the primary goals in providing this alternative to admission examination is increasing diversity by attracting applicants from different regions and social backgrounds,” says the admissions officer.

Most successful applicants in the new system are from other states—only 25% are from São Paulo. Students from Roraima, Piauí, Ceará, and Bahia have been admitted to UNICAMP through the new pathway in programs such as engineering, mathematics, and computer science. “There are talented students to be found in all parts of Brazil,” says Freitas Neto. “Students in small towns in the North or Northeast would not normally think to study so far from home, which is why programs like these are important.”

A case in point is 18-year-old Carlos Eduardo de Santana Bastos, from São Raimundo Nonato, a small town in Piauí, northeastern Brazil. With a population of 34,500 people, the town is famous for being home to the Capivara National Park, a UN cultural heritage site containing more than 1,200 prehistoric cave paintings. But neither this nor many other small towns in Brazil offer high-quality primary and secondary education. To make up for his deficient schooling, Bastos would spend hours studying math and computing at home. “I’ve always enjoyed these subjects and realized that the only option for me was to apply myself to studying on my own,” he recalls. He soon took an interest in national competitions, and in 2017 won a silver medal in the Brazilian Computing Olympiad.

Bastos was raised by an aunt and an uncle who had a job as a municipal healthcare worker. “He earned a minimum wage, and if I hadn’t had this opportunity to be admitted to a top university, I probably would not have considered studying so far from home,” he says. At UNICAMP he will need help to pay living and other costs. “I’m going to look into what support is available, as it will certainly be needed.” The UNICAMP Student Support Service offers housing, meal, and transportation allowances of up to R$876.81 per month. Students awarded grants for research during their studies are eligible to an additional R$400 per month.

Seventeen-year-old Uedson Neves had no money to travel from his hometown of Salvador, Bahia, to Campinas to enroll. At his public high school, his teachers and friends encouraged him to raise funds from his classmates and relatives. His effort was a success, with Neves collecting a surprising R$10,000, much more than he expected. The money will be used to pay expenses during his first months in Campinas. “Lots of people pitched in because they thought I had potential. Without their help, I wouldn’t have been able to live my dream of studying at one of Brazil’s most prestigious universities,” he says. 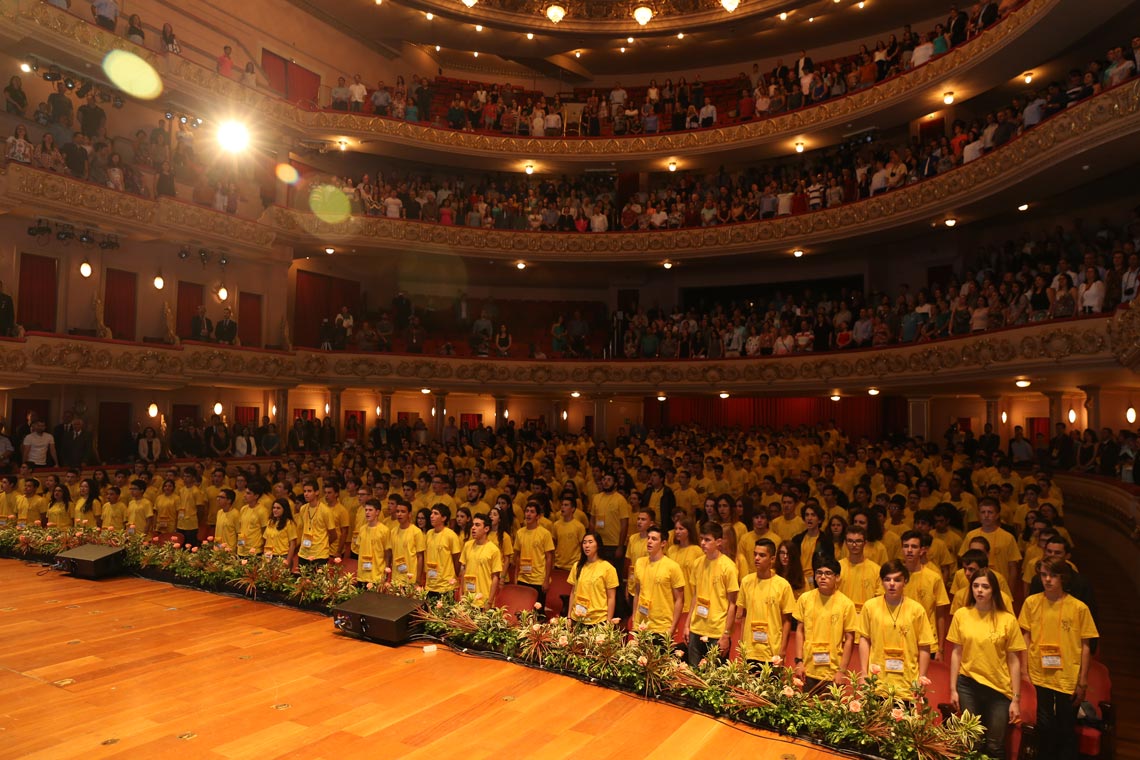 One of the most prolific medalists in recent years, Neves has won a total of nine medals in state and national chemistry competitions since 2015, and has always been one of the top students at his school. He was admitted as a secondary education student at the Federal Institute of Bahia (IFBA), where he delved into chemistry, the field in which he will now receive training at UNICAMP. “My family could never afford to pay for private school, but the good-quality education I received at IFBA helped me get into a top university.”

The University of São Paulo (USP) has been considering a similar admission model using a scoring system based on medals won in official STEM competitions. The associate dean for undergraduate student affairs, Edmund Chada Baracat, and members of faculty are also discussing ways to fill knowledge gaps where students fail the entrance examination. 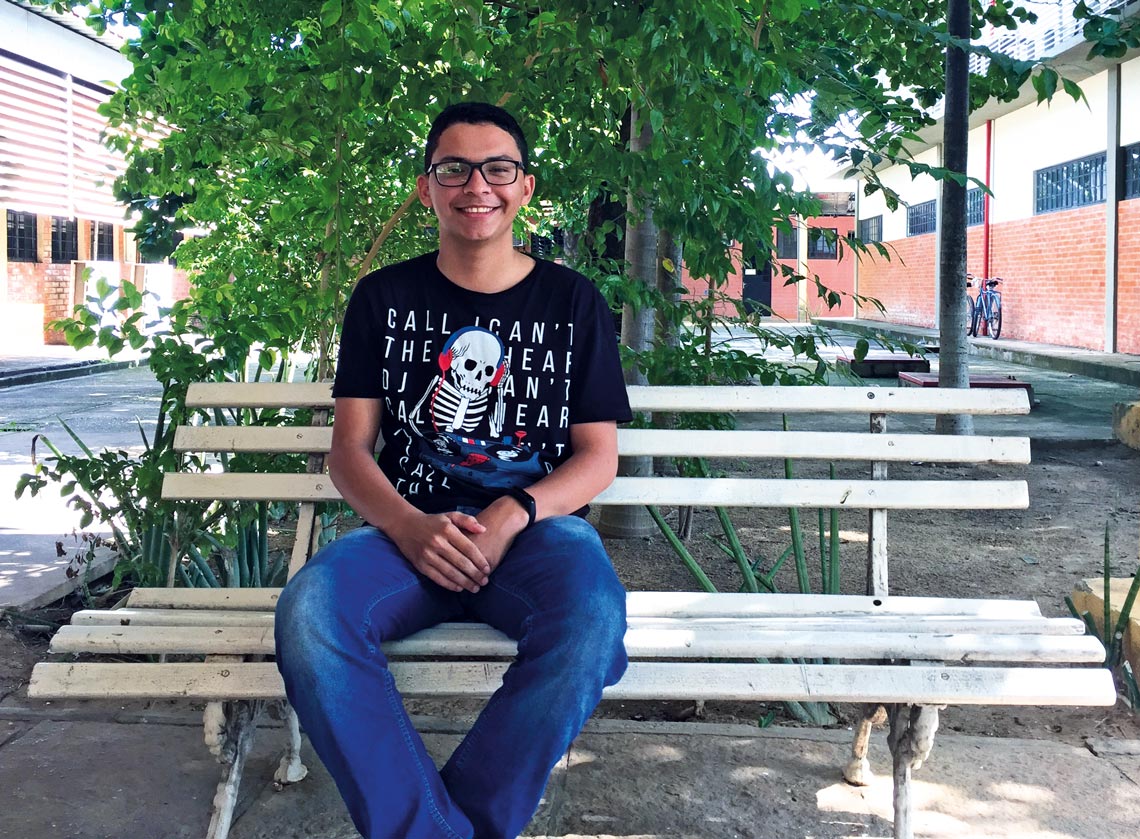 Carlos Bastos, from Piauí, is looking forward to studying computing at UNICAMPPersonal archive

One of the solutions being considered is providing online courses in subjects such as physics, chemistry, mathematics, Portuguese, and biology. “In general, primary and secondary education in Brazil leaves much to be desired,” says Baracat. The university is also considering new benefits to help students from other states who are admitted on competition scores to pay their tickets to come study in São Paulo. USP has a comprehensive program providing allowances for food, housing, study materials, and transportation for underprivileged students. “New systems create new challenges that need to be addressed,” says Bacarat.

São Paulo State University (UNESP) also plans to expand the options available for admission to programs offered by its 34 campuses. In 2013 UNESP became the first state university to implement an affirmative action system for public school students similar to that of federal universities, with reserved openings gradually increasing over time. “We want to attract top talent but also students from a diversity of backgrounds. So we will eventually implement a model that is similar to UNICAMP’s, but it will be adapted to ensure we balance our search for talent with our social mandate as a publicly funded university with a presence throughout the state,” explains UNESP’s associate dean for undergraduate student affairs, Gladis Massini-Cagliari. 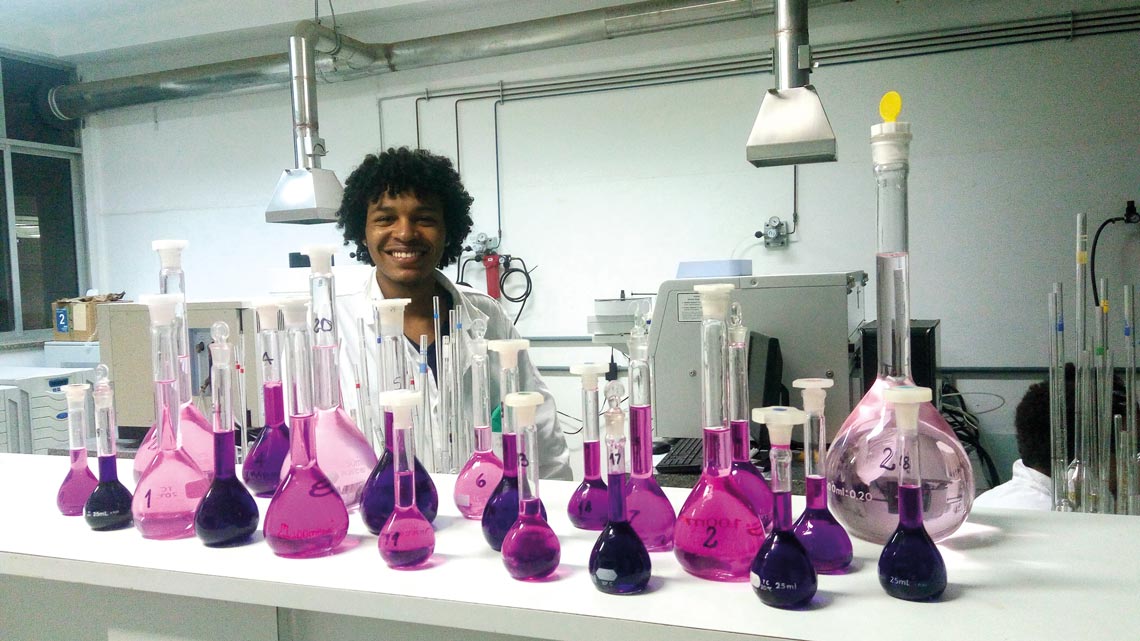 Uedson Neves, of Bahia, will pursue an undergraduate degree in chemical engineeringPersonal archive

Other types of affirmative action are also being introduced. UNICAMP this year launched a special admission examination for indigenous candidates as part of a strategy to promote inclusion. A total of 354 applicants took the exam in December last year in Campinas, Dourados (Mato Grosso do Sul), Manaus (Amazonas), Recife (Pernambuco), and São Gabriel da Cachoeira (Amapá), the latter of which is home to 23 different indigenous groups. In all, 68 students from indigenous groups such as the Baré, Tukano, and Baniwa—most living in Amazonas—were admitted. In February they began their studies alongside classmates admitted on competition scores, entrance examination scores, and National High School Examination (ENEM) scores. Racial diversity will also increase with a new ethnic quota system introduced this year, in which 25% of available openings are reserved for applicants self-identifying as black or mixed-race, based on their entrance examination and ENEM scores.

“Studying with people from different backgrounds will provide for a richer college experience,” says 17-year-old Gabriely da Cruz Camilo, of Jacutinga, Minas Gerais, who also earned a spot at UNICAMP through the competition score pathway. Unable to get a high-quality public school education in her town of 20,000, and after consulting her family, she decided to study electronics at the Campinas campus of the Federal Institute of São Paulo, a Federal trade school. She excelled in STEM fields, winning a bronze medal in a math Olympiad in 2013, a silver medal in 2015, and a gold medal in a national physics competition. At UNICAMP she chose to enroll in the Common Entry-Level Program, where students take STEM subjects for a year and a half before choosing an undergraduate program. “I want to contribute to scientific research; the opportunity to study here is like a prize for me.”