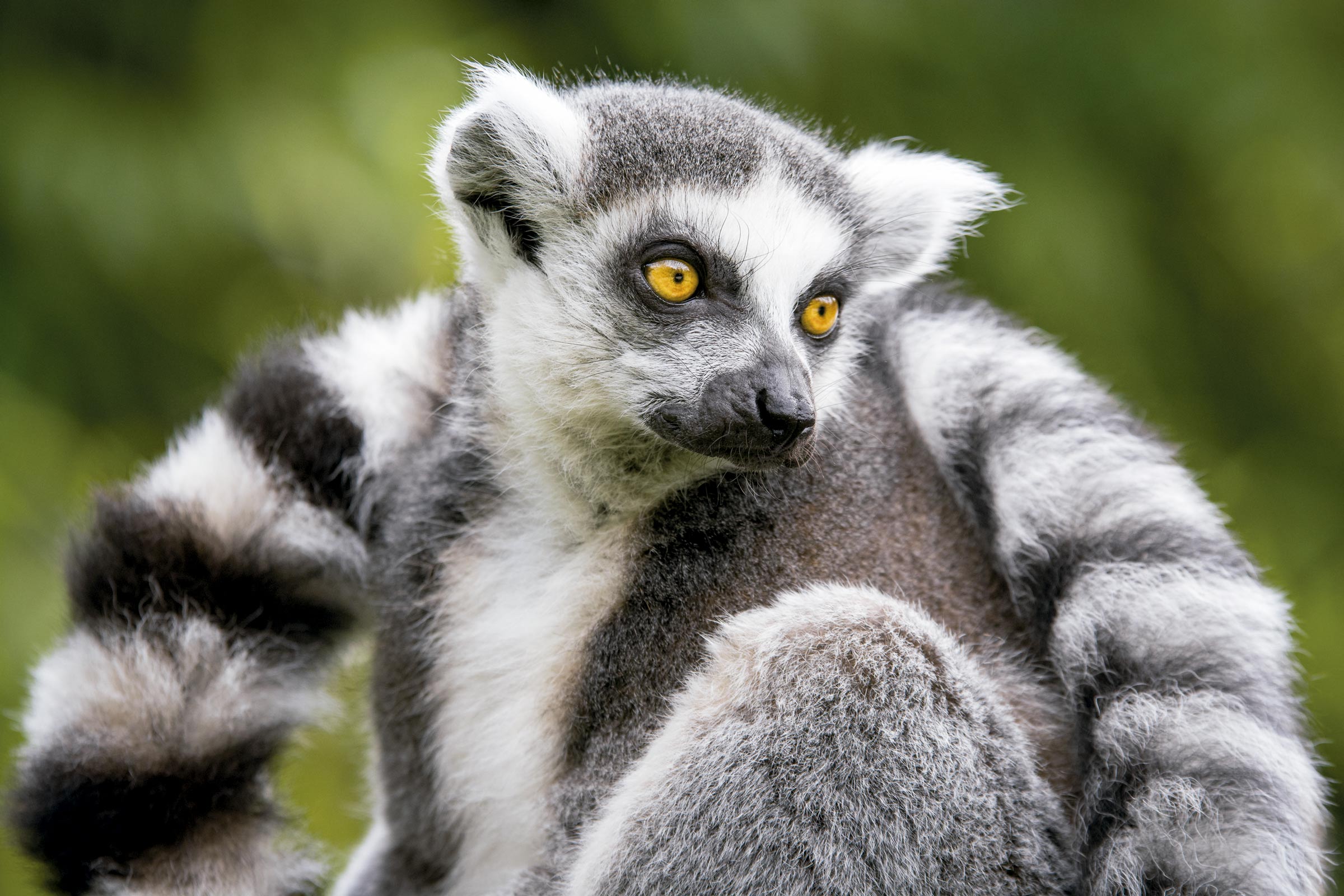 If nothing is done, populations of ring-tailed lemurs may disappear by 2100

Approximately 60% of the world’s primate species, including chimpanzees and orangutans, are at risk of extinction due to range contraction caused by agricultural expansion and, to a lesser extent, by logging and bushmeat hunting. If local governments and international organizations fail to take action in the coming decades, these primates, some of which have already seen significant population decline, may disappear by the end of this century. This somber prediction comes from a study by an international group of 72 primate specialists, including researchers from several institutions in Brazil.

The four countries where the situation is direst are also home to the largest number of species. Indonesia, Madagascar, the Democratic Republic of the Congo (DRC), and Brazil harbor two-thirds of the world’s 439 known primate species according to a survey published in the June issue of PeerJ. Brazil has 102 primate species, 39% of which are threatened (see chart).

The researchers looked at data from the International Union for Conservation of Nature (IUCN) on the conservation status of primate species and information from Global Forest Watch, an observatory of the expansion or retraction of forests. They also used information from the United Nations Food and Agriculture Organization (FAO) on the dynamics of agricultural expansion, as well as from the Convention on International Trade in Endangered Species of Wild Fauna and Flora (CITES) database.

Agricultural expansion is the primary threat to the survival of these animals in all the countries analyzed. From 1990 to 2010, about 1.5 million square kilometers of primate habitats were encroached upon for agriculture, placing many species at risk in Brazil and Indonesia. In the last two decades, these countries have lost 46.4 million and 23 million hectares (ha) of forest cover, respectively. Over the same period, DRC saw a loss of approximately 10 million ha of forest. In Madagascar the figure was 2.7 million ha.

One of the consequences of deforestation, according to the researchers, is the transformation of continuous expanses of forest into islanded patches. This phenomenon, called fragmentation, is limiting the availability of dispersal routes used by titis (Callicebus spp.) to move from one location to another in the south of Rondônia State, Brazil.

Commercial and subsistence hunting is decimating gorilla populations in the Democratic Republic of the Congo, AfricaSharp Photography/Wikimedia Commons

“Primates are part of an extensive and complex network of ecological interactions in tropical moist forests, helping to scatter seeds from large trees, preying on some animals, and serving as prey for others,” explains biologist Júlio César Bicca-Marques of the School of Sciences at the Pontifical Catholic University of Rio Grande do Sul (PUC-RS). “A reduction in primate populations would disrupt the ecosystems they inhabit, with adverse impacts on forest regeneration,” says the researcher, one of the authors of the PeerJ study.

Based on the data, the researchers developed a computational model to predict agricultural expansion by the end of this century in the four study countries, and the impact this would have on primate species in those regions. The worst-case scenario, based on the current rate of environmental degradation, showed a primate range contraction of 78% for Brazil, 72% for Indonesia, 62% for Madagascar, and 32% for DRC by 2100. According to the study, the threat in Brazil is greater because agribusiness here is both stronger and more expansionist than in the other study countries.

Veterinarian physician Danilo Simonini Teixeira, a researcher at the University of Brasília (UNB), says the data in the study are both relevant and credible. “The projections are based on information compiled from projects extending over a period of more than 20 years, so the estimates are fact-based and reliable,” says the researcher, who was not a member of the PeerJ study team.

Diversity under threat
The situation is especially worrying in Madagascar and Indonesia, which are home to 148 of the world’s 439 primate species. Around 90% are experiencing rapid population decline. In Madagascar, the illegal mining of cobalt, nickel, and gold has affected many forests, including protected areas, threatening primates such as the ring-tailed lemur (Lemur catta), recognizable by its white-ringed tail and bulging, orangish eyes. In Kalimantan, Indonesia, gold mining is a threat to the proboscis monkey (Nasalis larvatus) and to taciturn Bornean gibbons (Hylobates muelleri). “Many primates are captured and sold in cities as pets, for use in traditional medicine or for mystical purposes,” says Bicca-Marques.

Another menace to primates is commercial or subsistence hunting, which has expanded in recent years because of urban expansion into their habitats. An estimated 85% of primate species are hunted in Indonesia, 64% in Madagascar, 51% in DRC, and 35% in Brazil. A case in point are spider monkeys (Ateles geoffroyi), which are commonly hunted in the Amazon. In Brazil’s Atlantic Forest, the primary targets are the yellow-breasted capuchin monkey (Sapajus xanthosternos) and the southern muriquis (Brachyteles arachnoides). In DRC, hunting has significantly reduced the numbers of gorillas (Gorilla gorilla) and bonobos (Pan paniscus).

“Hunting is a practice with strong cultural roots and is more difficult to monitor than deforestation,” says bioanthropologist Mauricio Talebi of the Department of Environmental Sciences at the Federal University of São Paulo (UNIFESP), one of the authors of the study. He explains that hunting reduces the ability of primate populations with slow reproductive cycles to replenish themselves. “Females of some species can take up to 15 years to become fertile,” he notes.

In Kalimantan, Indonesia, gold mining is the primary threat to the proboscis monkeyPeter Gronemann/Flickr

Exposure to infectious diseases can also lead to a decline in some primate species. Between October 2002 and January 2004, outbreaks of ebola virus disease killed over 90% of gorillas and nearly 80% of chimpanzees inhabiting the Lossi Sanctuary in DRC. Since 2016, according to Talebi, a yellow fever outbreak in Southeast Brazil has caused the death of thousands of primates, including threatened species such as the northern masked titi monkey (Callicebus personatus) and the brown howler monkey (Alouatta guariba mitans).

In late December 2017, ecologist Márcio Port Carvalho of the São Paulo Forest Institute collected 65 brown howler monkeys that had been killed by the yellow fever virus in Horto Florestal, a state park in the northern area of the state capital (see Pesquisa FAPESP issue no. 263). “The risk of disease transmission is greater for primates living near densely populated regions,” Talebi explains. In Indonesia, many long-tailed macaques (Macaca fascicularis) are dying from measles and rubella.

Teixeira also recalls how a yellow-fever outbreak in Rio Grande do Sul between 2008 and 2009 killed more than 2,000 black-and-gold (Alouatta caraya) and brown howler monkeys. “The epidemic of 2016 and 2017 was more severe,” says Teixeira. “After decades absent from the Atlantic Forest, the disease virus has made a comeback in the region and exposed primate species that are already threatened by other factors to an added risk.” The veterinary physician, who served as chairman of the Brazilian Society of Primatology between 2016 and 2017, believes investment is needed in research and expanding the health surveillance laboratory network to mitigate the impact of the virus on primate populations in Brazil.

If nothing is done, populations of southern muriquis may disappear by 2100Paulo Gil/FPZSP Archives

“Around the world, infectious diseases pose a huge challenge to primate conservation,” says primatologist Paulo Henrique Gomes Castro of the National Primate Center in Belém, northern Brazil. “These populations are extremely vulnerable to viruses and their mutations. Even if we could develop a vaccine for them, immunizing wild populations would still be a huge challenge,” says the researcher, who was not a member of the PeerJ study group.

Coordinated action
The authors of the study call for different sectors of society, from national and international policymakers to nongovernmental organizations and civil society, to join in coordinated action for primate conservation. “Creating protected areas is the most effective conservation tool we have,” argues Talebi. Today, primates have only 17% of their range inside protected areas in Indonesia and 14% in DRC—in Brazil and Madagascar the percentage is higher at 38%.

In Indonesia, a group of 25 environmental researchers from the Alliance of Leading Environmental Researchers and Thinkers (ALERT) sent a letter to the Indonesian president in July urging him to halt plans to build a hydropower dam in northern Sumatra, on the grounds that the US$1.6 billion project will destroy the Batang Toru forest, home to the rare tapanuli orangutan (Pongo tapanuliensis).

Scientific article
ESTRADA, A. et al. Primates in peril: The significance of Brazil, Madagascar, Indonesia, and the Democratic Republic of the Congo for global primate conservation. PeerJ. Vol. 6, pp. 1–57. June 2018.