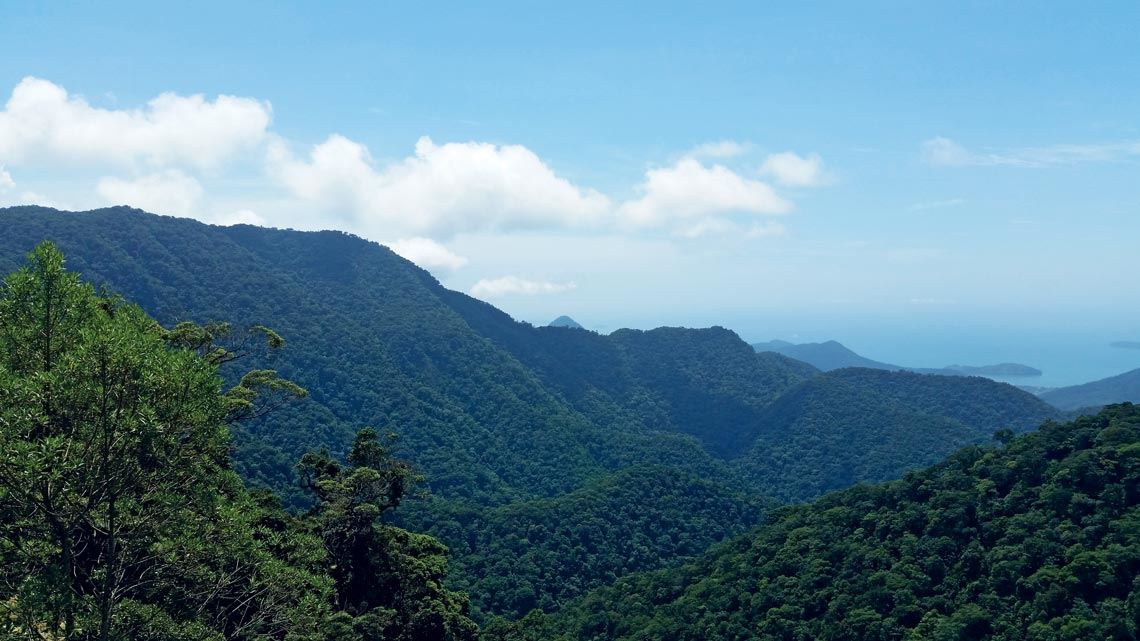 The long-term monitoring of more than 50 areas of Atlantic Forest, located inside and outside the Serra do Mar State Park (PESM) between the north coast of the state of São Paulo and the Paraíba Valley, has led to advances in our understanding of the interactions between vegetation and the climate in this biome. The benefits of preserving the forest have been highlighted by various studies—some still ongoing—under the Biota-FAPESP Program, an initiative that involves more than 1,200 researchers and is celebrating its 20th anniversary this year. The evolution of the results in this stretch of the Atlantic Forest, which today only covers 12.5% of its original area nationwide, reflects the dynamics of the change the Biota program is undergoing.

Created in March 1999 with the original objective of identifying, mapping, and analyzing species richness in the state of São Paulo, the program later expanded its scope, generating information that influenced public policy on conservation and restoration, and assuming partnerships and leading roles in studies examining the issue of biodiversity in the face of uncertainties caused by climate change. Biota has received almost 300 research grants from FAPESP throughout its existence, and is now celebrating its 20th year, although it was actually created 21 years ago. “We decided to celebrate now because our online journal, Biota Neotropica, turned 20 this year,” explains biologist Carlos Alfredo Joly of the University of Campinas (UNICAMP), one of the program’s founders and coordinators.

In the program’s early days, studies of the Atlantic Forest on the northern coast aimed to catalog local plant and animal species. This is an essential type of survey that has no clear end. The composition of plants and animals in the forest is not static, and there are always new species and occurrences to be described. “Today we have a good knowledge of the tree flora in the Atlantic Forest, as shown in the work we published in 2012. Now we want to understand how the forest works, how its species interact, and the relationship with climate change,” explains Joly. A specialist in plant ecology, the UNICAMP biologist promotes and participates in studies in the northern region of the Atlantic Forest in São Paulo and has been involved in the Biota program almost since the beginning.

More integrated studies give an idea of the scale of the environmental or ecosystem services that the vegetation silently provides to society. Science is then more able to answer questions about the influence of vegetation on rainfall and temperatures in a region (and vice versa) and its ability to slow down or accelerate climate change at a local or even regional level. A scientific article published in the journal PLOS One in December 2019 illustrates the more systematic approach of the Biota research.

By carrying out simulations in areas of Atlantic Forest located at the edge of the PESM and outside the limits of the park, researchers found that deforestation of 25% of a one-hectare area raises local surface temperatures by 1 degree Celsius (ºC). If the entire area is cleared, temperatures rise by 4ºC. The study was a partnership between Biota and the FAPESP Research Program on Global Climate Change (PFPMCG). For Biota, Joly was the senior researcher. For the PFPMCG, this role fell to climatologist Humberto Ribeiro da Rocha, from the Institute of Astronomy, Geophysics, and Atmospheric Sciences (IAG) at the University of São Paulo (USP) and a member of the PFPMCG’s management team.

Three field activities in the Atlantic Forest: an ID tag on a tree...
Cristina Máguas

At 332,000 hectares, the PESM is the largest continuous protected area of Atlantic Forest in the country—an inviting environment for long-term research. The São Paulo conservation unit extends from the border with Rio de Janeiro to the state’s southern coast. Its fauna and flora comprises more than 1,300 animal species, such as the capuchin monkey, tapir, and sloth, and 1,200 plants, such as tibouchina mutabilis, bamboo, and juçara palm. Since 2003, one of the Biota program’s longest-running projects has been surveying an area in the north of the park between Picinguaba beach in Ubatuba, at sea level, and the municipality of São Luiz do Paraitinga, located high in the mountains at about 1,100 meters of altitude.

Researchers working on the project carry out studies with varying focuses in permanent one-hectare plots (100 x 100 meters) within the PESM. These plots are located in well-preserved continuous areas of forest, as is found throughout most of the park. With the exception of illegal practices, such as poaching and palm heart harvesting, the conservation unit suffers little external pressure. The plots were selected because they represent the variability of the vegetation and climate in the Atlantic Forest between the coast and the tops of the mountains. The diverse landscapes range from dunes, sandbanks, and mangroves to Araucaria moist forests and dense rainforests.

When the Biota program first began, 14 plots were chosen inside the park; there are now 22. There are plots on the sandbank at sea level, in lowlands below 100 m altitude, in sub-mountainous areas between 200 and 400 m, and in mountain regions from 900 to 1,100 m. “The temperature can differ by up to 7ºC between plots at sea level and those above 1000 meters,” says agronomist and engineer Simone Aparecida Vieira of UNICAMP’s Center for Environmental Studies and Research, another member of Biota’s leadership, who conducts various studies in the region. About 54,000 trees have been tagged and are now monitored periodically. On average, more than 2,000 trees of 120 species in total are monitored in each plot. Parameters such as the growth rate, mortality rate, and carbon storage capacity are regularly checked.

In the middle of the last decade, Biota researchers created a new set of 32 smaller plots (0.25 hectares each), in 16 areas of Atlantic Forest located on private land between São Luiz do Paraitinga and Taubaté in Paraíba Valley. These areas of sparse vegetation, some at the edge of the PESM and others further away, represent fragments of Atlantic Forest that have been altered by human activities, such as livestock farming, on different scales and in different time periods. These islands of forest surrounded by deforested areas are widely used in Biota studies on the role and recovery process of non-continuous areas of Atlantic Forest.

Recent research suggests that how the fragments have historically been used may be more important to maintaining biodiversity than their size. “Small and isolated but well-maintained areas, sometimes managed by multiple generations of a family, can have greater species richness than larger fragments,” notes Vieira. “It is clear that the size and proximity of a fragment to other preserved areas is important, but it is not the only factor.” Outside conservation units like the PESM and other parks, where there are extensive continuous areas of forest along the Brazilian coast, the Atlantic Forest survives in the form of fragments, most of which are less than 1 square kilometer.

Together with Nidia Marchiori, who was a PhD student at UNICAMP at the time, biologist Marcos P. Aidar, from the Institute of Botany, an institution linked to the São Paulo State Department of Infrastructure and Environment, developed an index based on nitrate reductase, an enzyme found in plant leaves, to estimate the maturity of areas of Atlantic Forest going through recovery processes. “If the plants in a forest fragment use this enzyme a lot, this is a sign that the area is still in its initial growth and regeneration phase,” says Aidar. “This parameter is important when defining management policies for each fragment.”

Another line of research carried out by Biota in the northern region of the Atlantic Forest, which began about a decade ago and is ongoing, is attempting to understand how the vegetation stores and uses two elements considered essential to the life cycle: carbon and nitrogen. With carbon, the big question is the same as has been asked by many Brazilian and foreign studies of the Amazon: does the Atlantic Forest emit more carbon into the atmosphere in the form of carbon dioxide (CO2) than it captures from the air and retains as biomass in its vegetation and soil? Nitrogen, meanwhile, is one of the most important compounds for plant growth, and its level affects various aspects of plant physiology.

For now, the research suggests that the Atlantic Forest is in a state of balance. The forest tends to absorb a slightly greater amount of CO2 than it emits, with a propensity to become a carbon source in years of severe drought, such as 2014—a phenomenon also observed by studies carried out in the Amazon. The research into these two elements has produced some unexpected results. In an article published in the scientific journal Ecology and Evolution in 2011, Vieira, Joly, and other collaborators showed that the largest carbon and nitrogen stocks in the Atlantic Forest are stored underground in the form of organic matter, and their volume is greater at higher altitudes with lower soil temperatures. In the Amazon and other forests similar to the Atlantic Forest, there is more carbon and nitrogen above the ground.

“In the Atlantic Forest, an increase of 1 ºC reduces annual carbon absorption by 17 tons per hectare and annual nitrogen absorption by 1 ton,” says Vieira. There was twice as much carbon below ground as above, and ten times as much nitrogen. Despite these results, the researchers found that the biomass of bromeliads and orchids, both of which grow on trees, can store considerable volumes of carbon and must be taken into account when calculating the volumes of this element. A study published in the journal PeerJ in 2018 highlighted another oft-overlooked component: bamboo, which can store roughly 60 kilograms of nitrogen per hectare per year, with the help of free-living bacteria on its leaves. As this data suggests, Biota will be useful for many years to come in the pursuit of a better understanding of the relationships between vegetation and the climate.