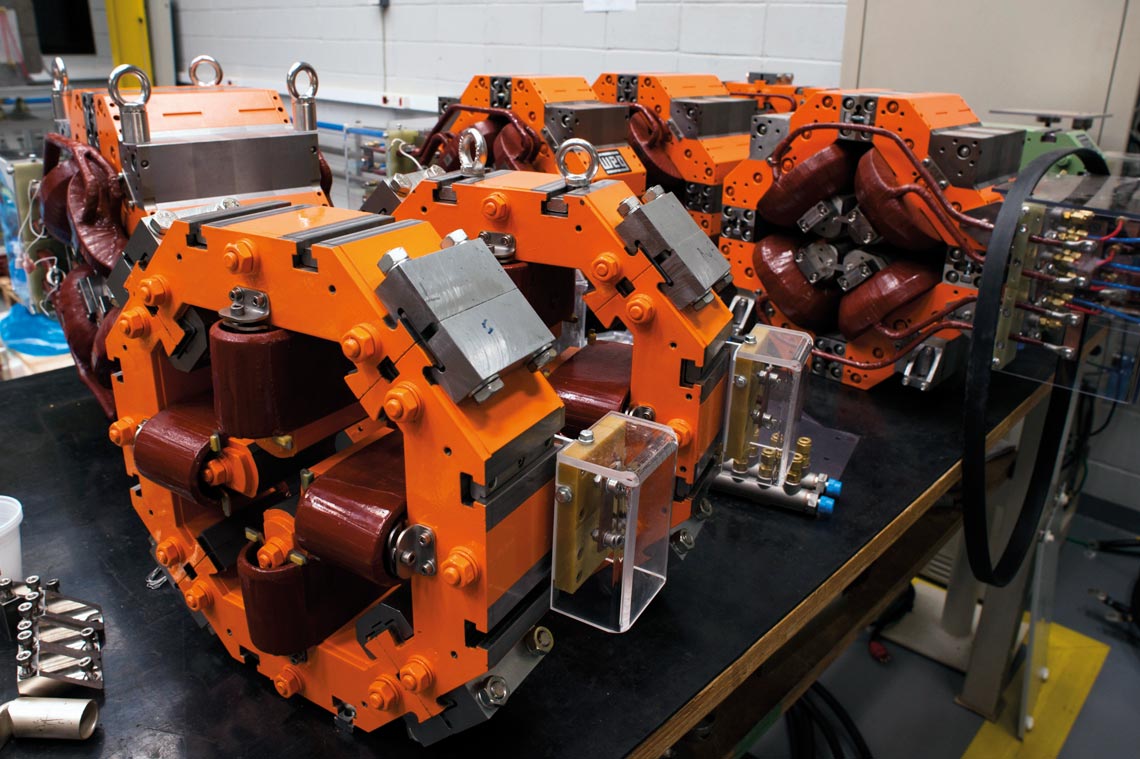 WEG, a Brazilian multinational conglomerate headquartered in Jaraguá do Sul, Santa Catarina, can take credit for an important contribution to the Sirius synchrotron light source project, one of the most ambitious scientific programs ever undertaken in Brazil. The company, which specializes in industrial motors, generators, automation equipment and other products, supplied the electromagnets used to build the facility, which was designed and is now operated by the Brazilian Synchrotron Light Laboratory (LNLS), in Campinas, São Paulo State. Electromagnets are used to steer the beam of electrons to generate synchrotron light and are a vital component of the system, and one that is particularly difficult to produce. Synchrotron radiation can be used to generate high-resolution images of the structure of materials, proteins, viruses, rocks, plants, and metal alloys, supporting scientific and technological research in a variety of fields (see Pesquisa FAPESP issue no. 269).

Few electromagnet manufacturers have the capabilities that the project required. WEG, itself, had never produced electromagnets before it was selected for the program, but had expertise in die-cutting operations involving iron-silicon sheet metal, the material used to make the electromagnet cores and which is also used in manufacturing the company’s power transformers (see article on page 42). The quality of the electromagnets is determined by how precisely their complex geometry specifications are met, says electrical engineer James Citadini, head of LNLS’s Magnet Group. Each sheet needs to have a dimensional precision within 5 to 8 micrometers (μm) so that the final sheet assembly is within a tolerance of 30 μm.

The LNLS and WEG teams worked together to develop very high precision electromagnets built using a novel method in which parts produced through die-cutting—a process which consists of cold-cutting parts out of sheet metal using dies—require no additional finishing operations. Normally, die-cut parts need to be machined to achieve the desired finish. This step lengthens the production process threefold, and the heat applied to the material reduces the magnetic quality of the electromagnets. “We came up with an innovative solution that generated significant savings for the project,” says Citadini. “And having a local supplier means they can promptly give us support when needed.” WEG produced and delivered precisely 1,036 electromagnets for LNLS.

And while its participation in the project was a success, the company has no plans of launching into the electromagnet market at this time, although it would consider invitations to produce electromagnets to order for particle accelerator programs in other countries. “What interested us in the partnership with LNLS was the challenge of participating in a high-profile project that gave us an opportunity to further develop our capabilities in precision die-cutting,” says Engineering Director Milton Oscar Castella.

One of Brazil’s leading multinational companies as ranked by business school Fundação Dom Cabral, WEG was founded in 1961 by Werner Ricardo Voigt, an electrician; Eggon João da Silva, a business administrator; and Geraldo Werninghaus, a mechanic. The three—now deceased—partners teamed together to set up a shop to produce electric motors, which have remained a flagship product to the present. With 14 factories in Brazil and another 28 in 11 countries in the Americas, Europe, Africa, and Asia, the company posted net operating revenue of R$11.9 billion last year. WEG employs 21,500 people in Brazil and 9,700 in other markets. In 2017, 53% of revenues derived from the sale of products launched within the previous five years. WEG was recognized as Brazil’s sixth most innovative company in Valor Inovação Brasil 2018, an annual list compiled and published by Strategy&, the strategy consulting arm of global audit firm PwC. 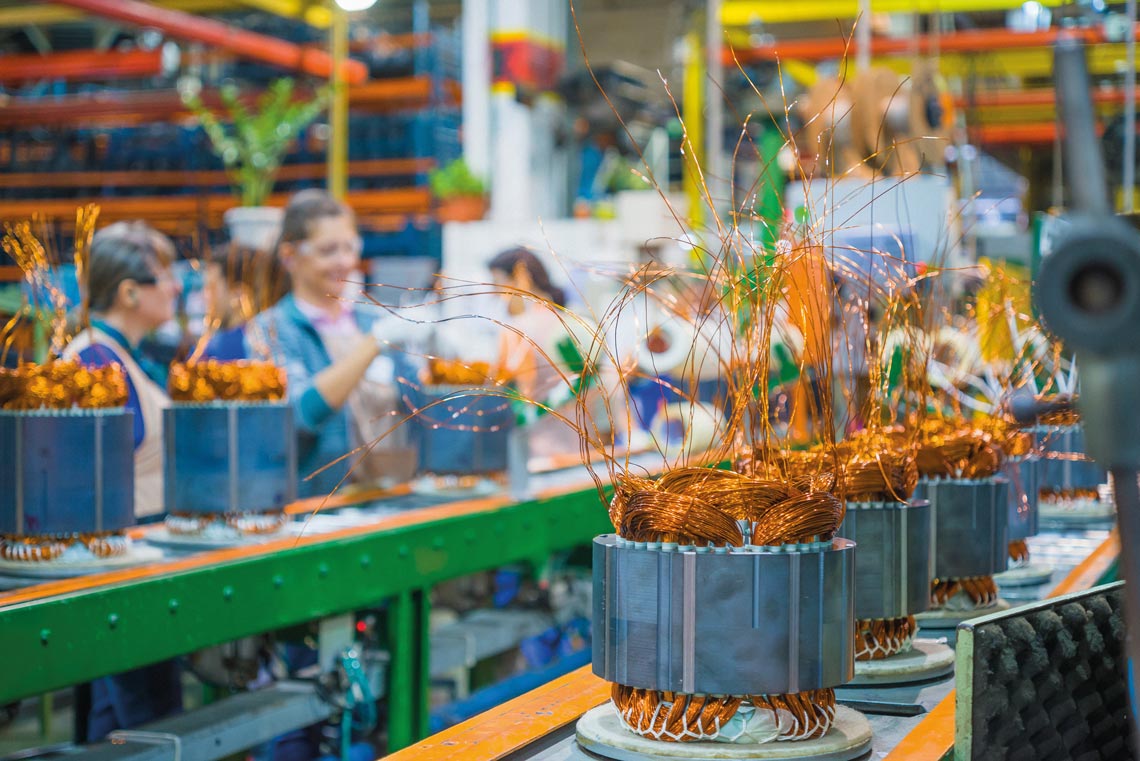 The motor production line at the factory in Jaraguá do Sul, Santa CatarinaWEG/CHAN

Connected motors
One of the most recent solutions developed at the company’s laboratories is WEG Motor Scan, an industrial motor-monitoring system based on the internet of things (IoT). The first version of the system, launched in 2018, uses a noninvasive sensor mounted on the motor to monitor temperature, vibration, and running time. Data is stored in the sensor until it is collected via Bluetooth using a mobile device, such as a mobile phone, and placed in the cloud for analysis using the WEG IoT platform. “Collected information can be used to predict equipment failure and inform actions to reduce unscheduled downtime,” says electrical engineer Sebastião Lauro Nau, an RD&I manager at WEG. 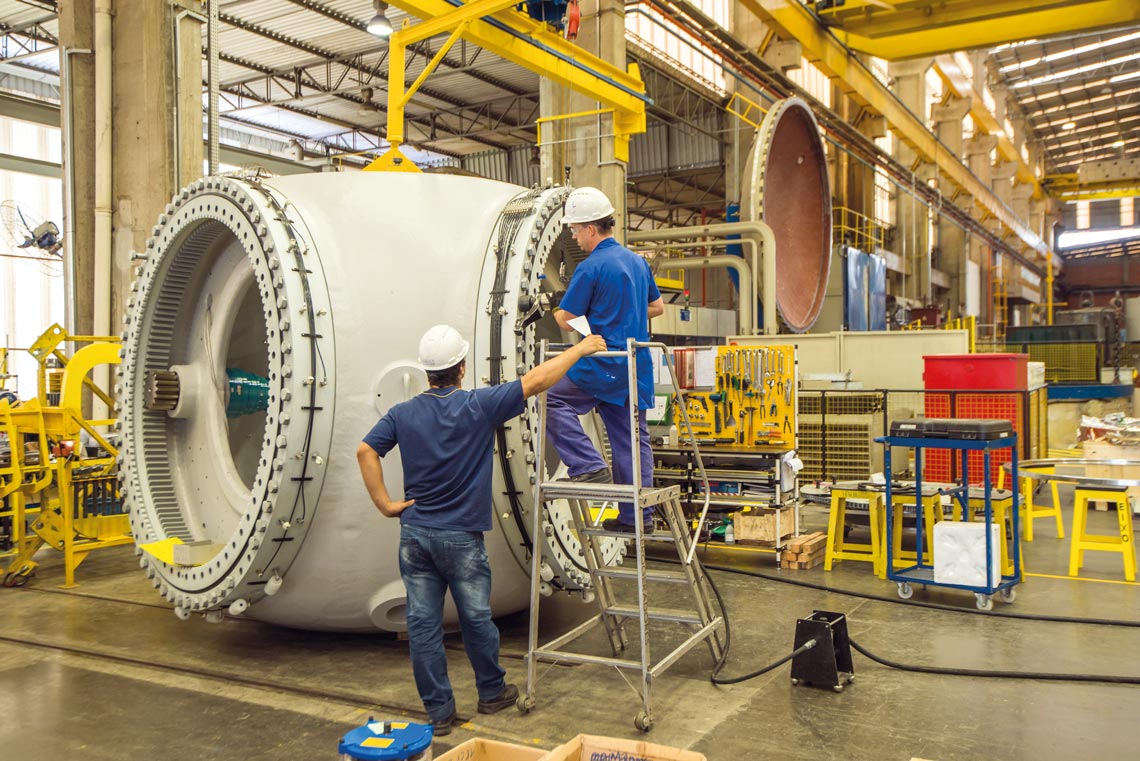 Assembling of wind turbines: the company is the only Brazilian manufacturer of the equipmentWEG / CHAN

An enhanced version of the WEG Motor Scan solution is currently being developed and should be available by the end of the year, says Nau. In the new version, sensor-collected data will be transmitted to gateways (devices that connect networks using different communication protocols) throughout the factory floor and placed in the cloud in real time.

The company will also launch a new 4-megawatt (MW) wind turbine within the coming month—wind turbines are devices used to convert kinetic energy from the wind into electricity. WEG currently manufactures two wind turbine models, with an output of 2.1 MW and 2.2 MW. Models with a higher power output are a recent trend in the industry as they allow more electricity to be produced within the same footprint as for a regular-sized wind turbine, says João Paulo Gualberto da Silva, head of WEG’s new energy division. WEG is the only local wind turbine manufacturer in Brazil (see Pesquisa FAPESP issue no. 275).

The 4 MW model was developed collaboratively by a team of Brazilian and American engineers. In 2016 WEG acquired the wind turbine division of Northern Power Systems (NPS), based in Vermont. Following the acquisition, WEG now offers wind turbines featuring NPS’s direct drive technology, in which the rotor and generator run at the same speed, without a gearbox. The technology reduces the need for maintenance on turbines sitting on towers more than 120 meters high.

WEG’s renewable energy portfolio also includes hydro and photovoltaic generation equipment. In 2018, after receiving clearance from Brazil’s antitrust authority (CADE), the company acquired TGM, a steam turbine manufacturer based in São Paulo, in a deal that began to be structured in 2016. “The acquisition will allow us to develop solutions for power generation using different types of biomass,” says engineering director Milton Castella.

Acquisitions of established businesses are one component of WEG’s diversification strategy. In February this year the company acquired Geremia Redutores, a manufacturer of speed reducers and other mechanical drive components in Rio Grande do Sul, southern Brazil. That same month, WEG bought another division of NPS which designs and produces energy storage systems, such as lithium batteries.

The electric vehicle segment will be another target for expansion in the coming years. WEG has recently developed a new powertrain system—an assembly of components used to propel a vehicle forward—comprising an electric motor, a frequency inverter and imported batteries. In 2017, WEG partnered with truck manufacturer MAN Latin America to develop e-Delivery, the first 100% electric light truck made in Brazil. The vehicle, which features the company’s new powertrain, will be equipped with an 80 kW (109 hp) motor. The vehicle is currently undergoing testing, with the start of production planned for 2020.

The first hybrid (electric combined with diesel, ethanol, or gas) minibus designed in Brazil—the e-Flex Volksbus—is also expected to launch next year. The vehicle was developed by Volkswagen Caminhões e Ônibus, which selected WEG to supply powertrain systems delivering up to 350 hp. “We plan to develop electric drivetrain solutions also for tractors, ships, boats, forklifts, medium and large trucks, and aircraft,” says Castella. The passenger car segment, however, is currently not on the company’s plans.