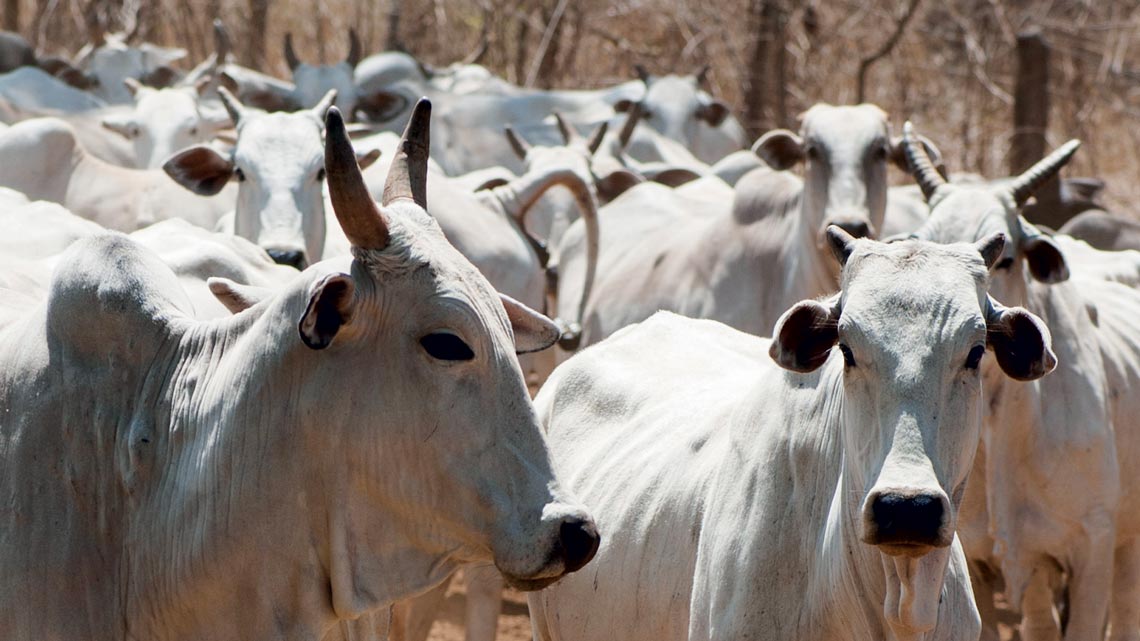 Brazil’s cattle industry loses an estimated US$3.2 billion per year because of the Asian blue tick

Good news for Brazilian farmers and coffee growers. New methods are emerging to combat the Asian blue tick, which is responsible for an estimated US$3.2 billion of losses per year nationwide, and the coffee leaf miner, the most prevalent pest on coffee farms. The two solutions, created by São Paulo–based company Decoy and the University of Franca (UNIFRAN), use biological pest control techniques, which have less impact on the environment than traditionally used chemicals.

Decoy’s tick control, made of fungi, which are a natural enemy to the parasite, is available in two formulations, one to be sprayed on the animals and the other sprayed on the pasture area. According to the company, the fungi affect all stages of arthropod development, killing eggs, larvae, nymphs, and adults. The Asian blue tick is a major threat to Brazil’s position in the beef market—with more than 200 million head of cattle (the largest commercial herd in the world), the country is the world’s largest exporter and second-largest producer, surpassed only by the USA.

Decoy was part of the incubator at the Supera Innovation and Technology Park in Ribeirão Preto (São Paulo), and decided to develop its biological control due to the growing resistance of the Asian blue tick, Rhipicephalus (Boophilus) microplus, to chemical agents. The problem is the result of indiscriminate use of such products, which also contaminate the environment, animals, and human beings.

“We are adapting a concept that is already widely used in agriculture to livestock farming. We have developed products for biologically controlling pests of economic significance, in response to the demand of producers,” says biologist Lucas Garcia von Zuben, one of the founders of Decoy.

In addition to researching fungal treatments for R. (B.) microplus, the company is working on other innovative projects, two of which are supported by FAPESP’s Research for Innovation in Small Businesses (RISB, or PIPE in Portuguese) program. One is attempting to create a fungal bioinsecticide for use against litter beetles (Alphitobius diaperinus), which are a major problem for poultry farmers, and the other, also based on fungi, is for controlling the Varroa destructor mite, which attacks Apis mellifera bee colonies. 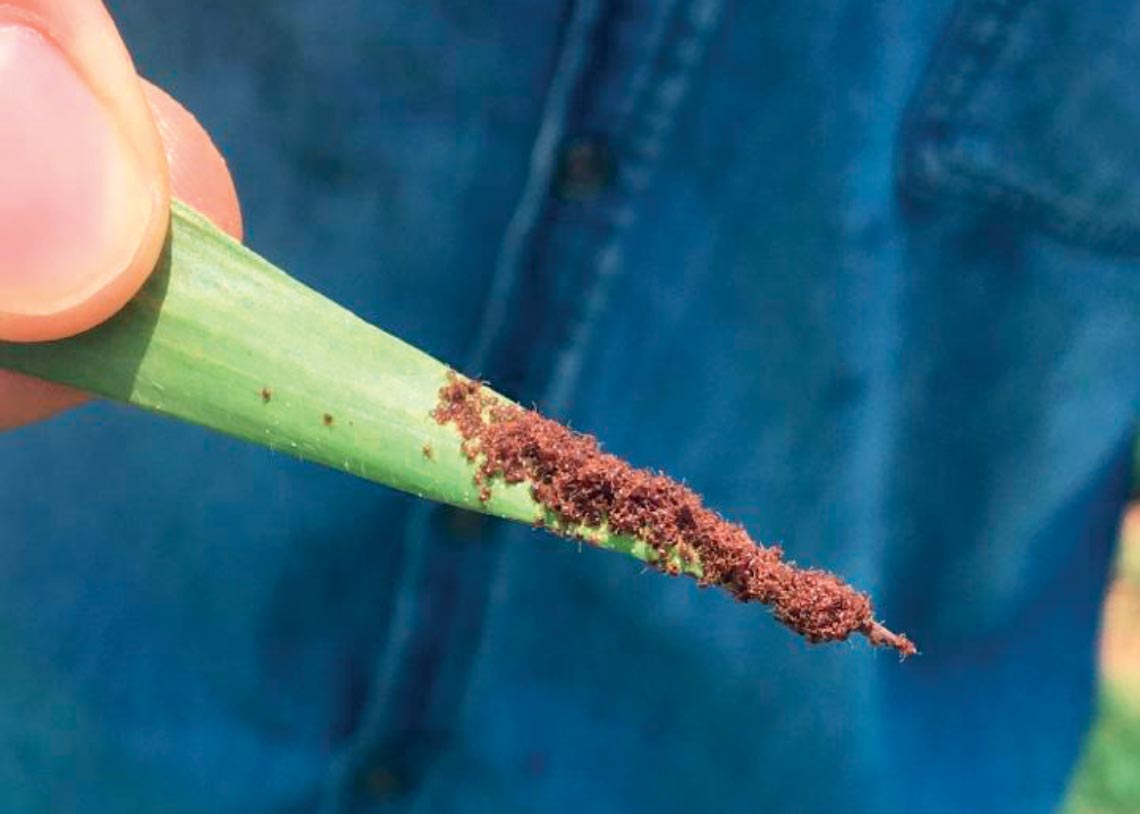 Crazy idea
Founded in 2015 by biologists von Zuben and Túlio Marcos Nunes, then postdocs at the University of São Paulo (USP), and economist Filipe Dal’Bó, Decoy has around 30 employees, seven of whom are researchers. The company joined the RISB program in the same year that it was created, but it did not create any products in that time. “Our first RISB project was a pheromone tape that can be attached to animals to attract the parasites. When we started learning more about livestock—until then, we’d been studying bees—we saw how crazy that idea was. You don’t need to attract ticks; in pasture areas, the cattle themselves attract them,” recalls Nunes.

The initial research was the basis for the company’s scientific and financial structure. The startup has already received R$1.8 million in private investment and wants the biological anti-tick pesticide to be its flagship product. It is currently being tested by more than 700 cattle ranchers. Decoy provides the pesticide and technical guidelines on how to use it, in return for an undisclosed fee to continue its development.

“You have to be open to new things. I was having problems, but I would have embraced the idea anyway,” says João Queiroz, a beef cattle farmer from Presidente Prudente in the state of São Paulo. He was losing some 20 heads of cattle to the tick every year. “One that died was infested with 3,000 parasites, and there was no negligence on my part.” The producer had tried every product available to fight the pest when, thanks to a common interest—beekeeping—he met Nunes, who told him about his solution to the issue. “It took us three months to control the problem. The difference is incredible; since then, I haven’t lost a single animal,” he says.

For now, Decoy does not wish to reveal which fungi it uses in the formulation. The effectiveness of the products in laboratory tests varies from 80% to 100% depending on the concentration and life stage of the tick. In the field, the effectiveness is estimated to be at least 70%, depending on how the product is applied. “We are working on gathering this field data more robustly, since environmental conditions have a significant influence,” says von Zuben. This information is essential for obtaining approval for the pesticide from Brazil’s Ministry of Agriculture, Livestock, and Food Supply (MAPA). Authorization from the agency requires an efficiency of 95%, a rate considered high when it comes to biological controls. 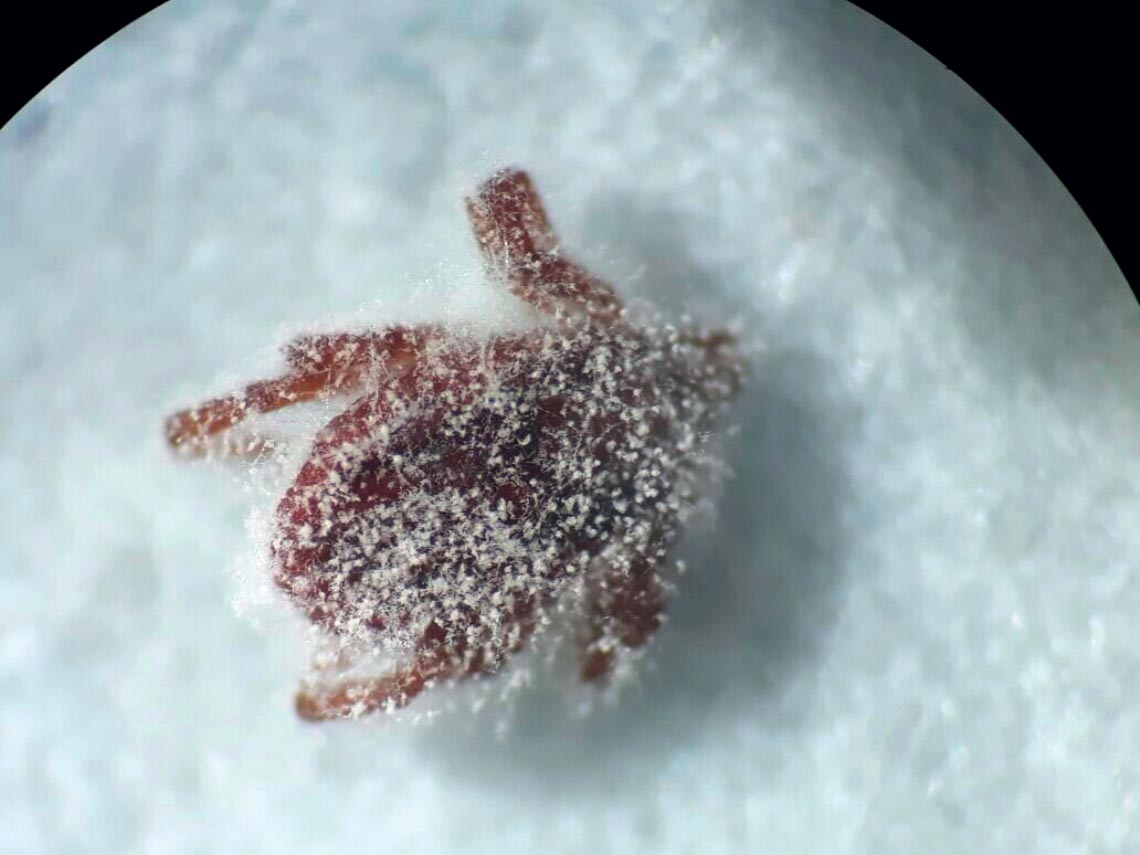 The arachnid under the effect of Decoy’s biological agentTatiana Magalhães

“The rules were established for chemical products. Biological controls require a different type of analysis, since they function based on populational dynamics over a certain time period,” argues Nunes. Decoy plans to request that a new analysis protocol be created, better suited to biological products, although it has already begun the licensing process for its biofactory. Located in Supera Parque, the 80-square-meter plant will be able to supply enough product to protect 1.2 million animals per month.

One of the biggest obstacles to obtaining authorization for biological pest control products for livestock is the bureaucracy involved, although scientists have been researching the topic since at least the 1990s. “Between 2015 and 2019, more than 40 new companies registered their first biological pest control products. In 2020, 95 products were registered for the agricultural market, with veterinary use still unexplored,” points out Italo Delalibera Júnior, am agronomist at USP’s Luiz de Queiroz College of Agriculture (ESALQ) and a researcher at the São Paulo Advanced Research Center for Biological Control (SPARCBIO), funded by FAPESP and Koppert Biological Systems.

There is another technical obstacle to launching any effective pesticide against the Asian blue tick. According to veterinarian Renato Andreotti, from the Brazilian Agricultural Research Corporation (EMBRAPA) and a professor at the Federal University of Mato Grosso do Sul (UFMS), several studies show that while fungal agents work well in the lab, they do not demonstrate the same effectiveness in the field. “One of the problems is ultraviolet rays from the sun, which kill the fungus,” he explains.

For 30 years, Andreotti has been studying different techniques for controlling the Asian blue tick and has just filed a patent for a vaccine made from the parasite’s peptides. “Maybe the startup’s researchers have found a fungal formulation that is also effective in the field. The chemicals used against this parasite are declining in effectiveness because of their resistance,” says Andreotti. “I hope that new solutions emerge.” 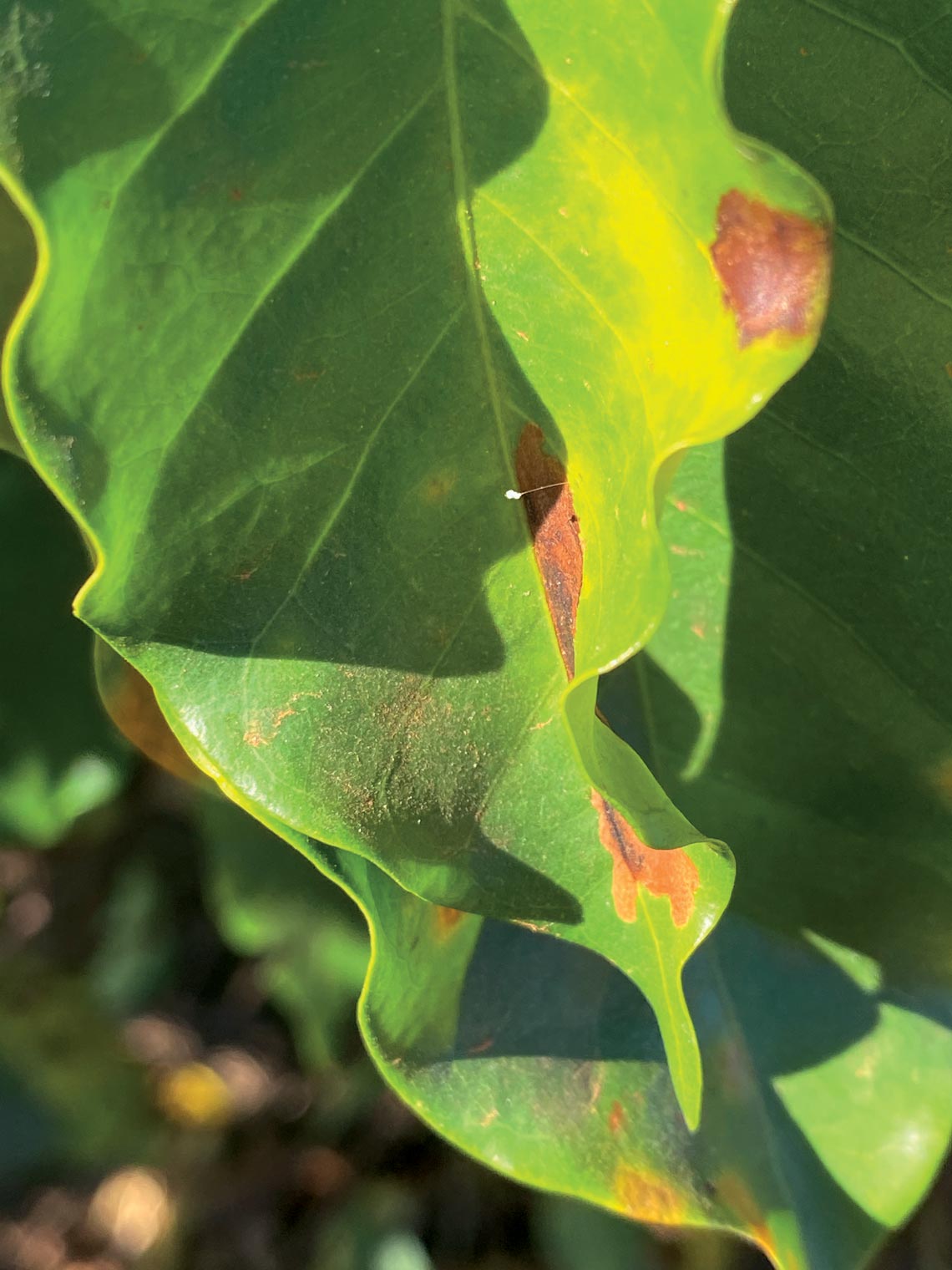 The target in this instance is the coffee leaf miner (Leukoptera coffeella), a white moth whose larvae live in and eat the plant’s leaves, leaving so-called mines. The damage to the foliage impacts photosynthetic capacity, reducing the longevity of coffee plants or even killing them. A severe infestation can reduce the productive capacity of a coffee farm by up to 70%, according to a study published by EMBRAPA Genetic Resources and Biotechnology.

In an effort to offer an ecological and sustainable alternative, Vacari has been working with seven undergraduate students, all recipients of FAPESP undergraduate research scholarships, to produce lacewings in the lab and analyze their predatory and reproductive behavior in the field. “Our research is of interest primarily to specialty coffee producers, who are required to adopt an IPM strategy to gain certification, as well as to organic coffee growers, who aren’t allowed to use synthetic chemical insecticides or acaricides,” explains Vacari. 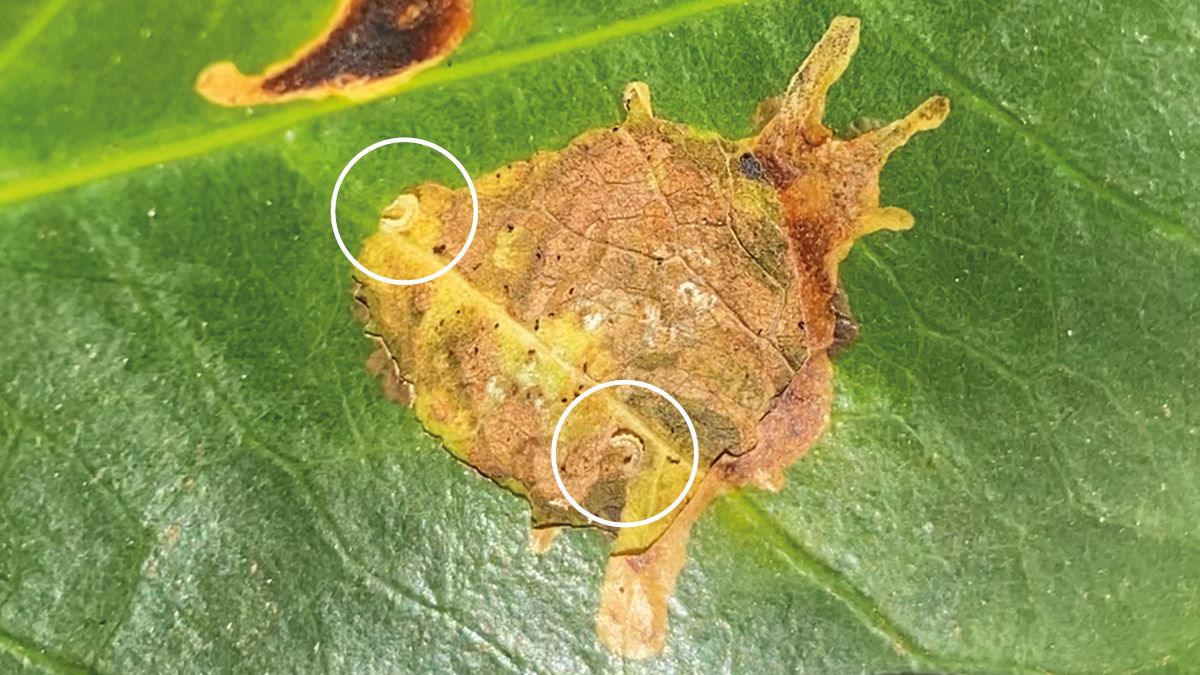 Three lacewing species are being bred in a controlled environment at UNIFRAN. When the eggs are about to hatch, they are released into the field and observed in the larval, pupal, and adult stages. The feeding and colonization habits of the lacewings are monitored outside the university. “Farmers are so interested in the results of the research that they offer their farms for studies. We have already established partnerships with several specialty and organic coffee farms,” explains the entomologist.

One is Fazenda Bom Jardim, in Franca, São Paulo, which in 2016 began the process of transitioning from a traditional coffee farm that uses conventional chemicals and pesticides to strictly organic. According to Alexandre Leonel, one of the farm’s owners, “leaf miner infestation rates, which were around 65%, dropped to somewhere around 10% after four lacewing releases.”

The biological approach, says Leonel, resulted in greater productivity. “The plot that received the lacewings produced well last season. This year, even with the drought and other challenges, we estimate that it will produce around 30 bags per hectare, which is a good yield. Other plots that have not received the treatment are expected to produce 10 bags per hectare,” says the coffee grower. “The results are promising, but they only reflect one cycle of administering these biological agents. We need to monitor at least three cycles to verify the technology.” 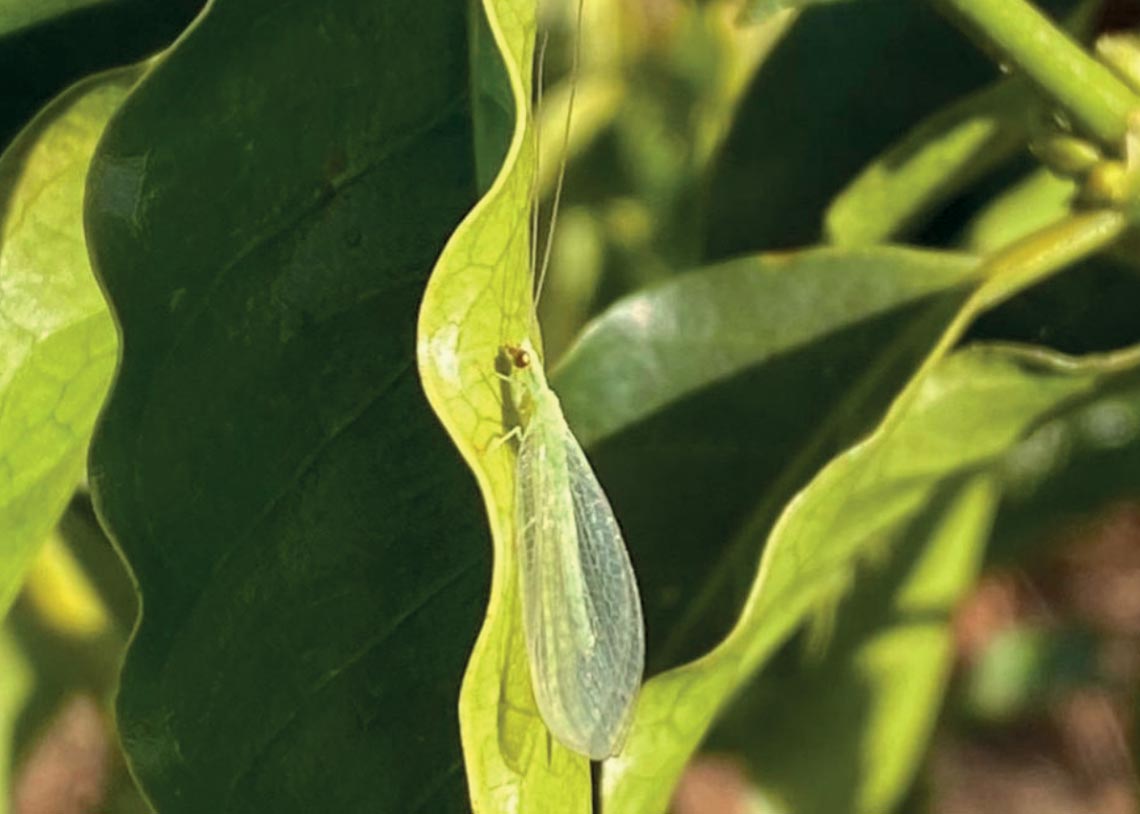 Leaf miner map
“The first documented use of lacewings for pest control dates back to the 1980s, on cotton farms in Colombia,” says taxonomist Francisco José Sosa Duque of the Federal Rural University of Amazonia (UFRA), one of Vacari’s partners in the study. By no coincidence, the use of lacewings on Brazilian coffee farms was inspired by cotton farming methods. In 2013, the Minas Gerais Cotton Producers Association (AMIPA) created a biofactory to produce macro-organisms, including Trichogramma pretiosum, a minute parasitoid wasp used to combat caterpillars.

They then began to breed lacewings to prey on mites, aphids, and whitefly nymphs on cotton crops. “Since our associates had 12,000 hectares of coffee on their properties, we decided to test the lacewings against the leaf miner, and we instantly saw the potential. Today, 90% of our lacewing production is for coffee production,” says Lício Pena, executive director of AMIPA.

With a large production capacity and encouraging results in field tests, the next step is to make commercial sales of the lacewings viable. AMIPA recently filed its first application for MAPA approval of the species External Crhysoperla. While waiting for authorization, another procedure is being followed by the association: conservative biological control, meaning they are planting other species near the coffee plants to naturally maintain the lacewing population. “By dissecting adult insects, we found that they have a preference for eating aromatic and flowering plants. So we planted these species around the coffee farm; some fix nitrogen and others recycle nutrients, enriching the soil,” adds Pena. If the strategy works, population control of the coffee leaf miners will require fewer lacewing releases, since these natural enemies will have colonized the farm.