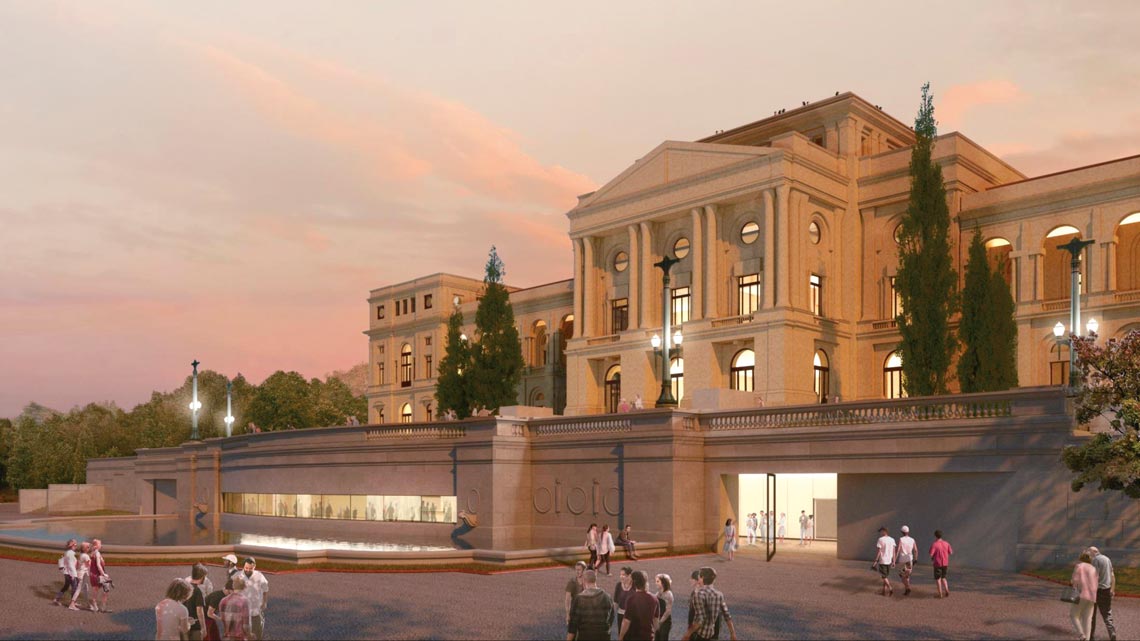 In September, construction will begin to restore and modernize the Paulista Museum, also known as the Ipiranga Museum, the 100-year-old institution that is connected with the University of São Paulo (USP). At an event in the Bandeirantes Palace on May 17, the state government announced the 13 companies that will fund the project. The investment is the result of work undertaken by USP and by the government itself, starting in 2017, to raise funds from civil society and the private sector. The initiative has already raised R$160 million in donations. Among the companies that will contribute to the funding of the new museum are the Company for Basic Sanitation of the State of São Paulo (SABESP), the Itaú Cultural Institute, and the following banks: Banco do Brasil, Safra, Bradesco, among others. “This is the greatest amount of support provided in the history of Brazilian culture,” notes Antônio Lessa, coordinator of Museums and Institutional Relations for the State Department of Culture and Creative Economy.

“We are now working on reviewing the project plans and preparing the request for proposals for the selection of the construction company to carry out the restoration project,” said civil engineer Vahan Agopyan, dean of USP. The announcement of the successful bidder will be made on September 7 at an event promoted by USP and SESC Ipiranga in Independence Park. “The idea is that the restoration project will begin in September and finish mid-2022, slightly before the beginning of the celebrations for the bicentennial of the Independence of Brazil,” says Lessa.

The companies participating in the funding of the project could acquire varying levels of sponsor status by investing anywhere between R$1.2 million and R$12 million. In compensation for the investment, USP will launch strategies to promote these sponsors by exposing their brands and linking them with the institution’s restoration and modernization initiative. “The agreement also includes other marketing activities that will vary depending on the amount invested by each company,” clarifies Lessa. EDP Brasil, an arm of Energias de Portugal and the Lusitanian electricity giant, was the first to become a sponsor in January of this year. The company will provide R$12 million between now and 2022. Another sponsor, SABESP, will donate R$12 million, in addition to guaranteeing an extra R$4 million for the recovery of the Ipiranga stream. The expectation is that, after construction is complete, the new museum will welcome up to 900,000 visitors in its first year of operation, and close to one million guests in future years.

The Paulista Museum is the oldest museum in the city of São Paulo and welcomed close to 350,000 visitors per year until 2013, when it was closed to the public due to problems caused by water leakage in the ceilings of some rooms. Due to danger of ceiling collapse, the institution decided to put a hold on public visitation and remove almost all of the collections. “We undertook shoring of the room ceilings that were most affected in an effort to guarantee the safety of the most important areas,” says historian Solange Ferraz de Lima, professor at USP and director of the Paulista Museum. “At the same time, we accelerated the project development process for the restoration and modernization of the monumental building.” Negotiations opened the way to contract companies the following year to assess the condition of the façade, internal décor, and the infrastructure and roof of the building. “These diagnostics served as a base for the development of the restoration proposal.”

In 2018, the Department of Culture and Creative Economy and USP began to work together on efforts to raise funds through donations and on the project planning for restoration and modernization. According to Agopyan, however, the fundraising efforts only began to take off at the beginning of this year, with the change in state administration. He recognizes that the efforts of government were essential for attracting sponsoring companies. “Governor João Doria [PSDB] got personally involved to successfully attract the companies,” says the dean.

The investments toward the project will be forwarded to the Support Foundation of the University of São Paulo (FUSP), which is responsible for brokering the relationship between the donors and USP. The funds will be raised through tax exemptions, made possible by the Federal Law for Cultural Incentives, the Rouanet Law. The project plans for the restoration of the museum were developed by H+F Arquitetos, winners of the architectural bid, launched by FUSP at the end of 2017 to select the modernization project for the monumental building. The winning bid includes the restoration of the building and the expansion of the esplanade area in the gardens of Independence Park, as well as the installation of a fire safety system and modernization of the electrical system and security system within and surrounding the museum. The plans also include the construction of 6,000 m2 of new area, including a basement with entrance via Independence Park, two escalators, one elevator, an area of 1,000 m2 for temporary exhibits, rooms for educational initiatives, shops, an auditorium, a coffee shop, and an observation deck. “The development and completion of the project plans was the final turning point in our planning to begin the construction work on the museum with the safety measures necessary for success with a project of this size,” says Solange Lima.

The Paulista Museum was inaugurated in September 1895, then called the Museum of Natural History. The monumental building was designed by Italian engineer and architect Tommaso Bezzi (1844–1915), and built between 1885 and 1890 to mark the proclamation of Independence on September 7, 1822. Its gardens were commissioned by the Belgian Arsênio Puttemans, creator of the landscaping project for the Luiz de Queiroz College of Agriculture (ESALQ) at USP. The museum became part of the university in 1963, specializing in the history of Brazilian cultural material and became a benchmark collection for research about Brazilian society, primarily in the nineteenth and twentieth centuries.

Transfer of the collection
“We have been monitoring the building since it was closed,” explains Lima. “At the same time, museum teams have focused on the transfer of its assets to locations adapted to function as technical reserves and laboratories.” The move of the collection began in June 2017. Seven properties were rented by USP in the Ipiranga neighborhood, in the southern zone of the capital of São Paulo. Two of these locations have been used for museum administration and educational and outreach activities; the other five were prepared to receive the 370,000 pages of textual and iconographic documents, as well as the 30,000 objects, such as coins, stamps, furniture, china, and vehicles. Lima explains that the composition of the collection began to increase in the 1990s, when new professors and researchers joined USP. “Research resulted in the collection of new documents and objects that today are part of the assets of the Paulista Museum,” she says.

The rented buildings were appropriately furnished through an infrastructure project funded by FAPESP. “The museum will be completely empty by the end of July,” confirms Lima. Only the largest works will remain in place, such as the painting Independence or death, by Pedro Américo (1843–1905), and the marble sculptures of Raposo Tavares and Fernão Dias, by the Italian Luigi Brizzolara (1868–1937), which were not removed from the museum for logistical reasons. 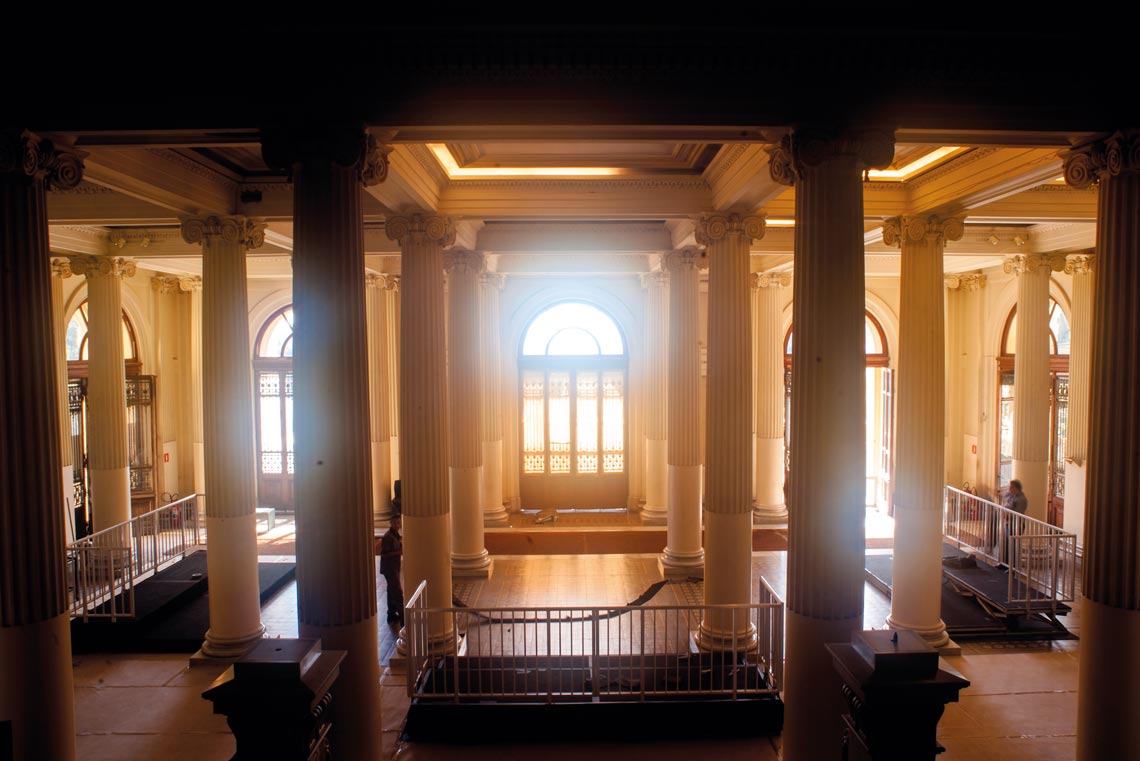 After construction is complete, the collection items will only return to the museum building for exhibitions. “We will maintain the collection in the rented buildings until there is a permanent location for the technical reserve and the laboratories,” says Lima. The goal is to build a space for the storage of the collection near the main building, but there is no timeline yet for this project to begin. “Our priority is to reopen the historical building,” she confirms. The library and the area of textual and iconographic documentation remain open for researchers and for classes of undergraduate, graduate, and outreach students. “Even though it is closed for visitation, teaching activities and research have never been stopped,” notes dean Vahan Agopyan.

Another challenge that has appeared on the horizon of the institution involves the management and creation of alternative sources of funding to maintain the new buildings. According to Agopyan, USP is studying, along with the state government, new models of museum management, which today is under the responsibility of the university. In October of last year, the management of the institution invited specialists from various countries to participate in the event “Designing the future: Management and sustainability in museums.” The idea was to discuss strategies that would help to guarantee the financial sustainability of the institution after completion of the construction project. “The event,” according to Lima, “gave us the opportunity to learn about international experiences and see that good museums have multiple sources of funding.” They are planning to hold this event again in October.

“A university museum is much more than a place for exhibitions and curatorship of collection samples,” points out Agopyan. “It has taken us many years of work before beginning construction.” For Lima, the Paulista Museum is part of Brazilian identity and “is present in the imagination of the population.”