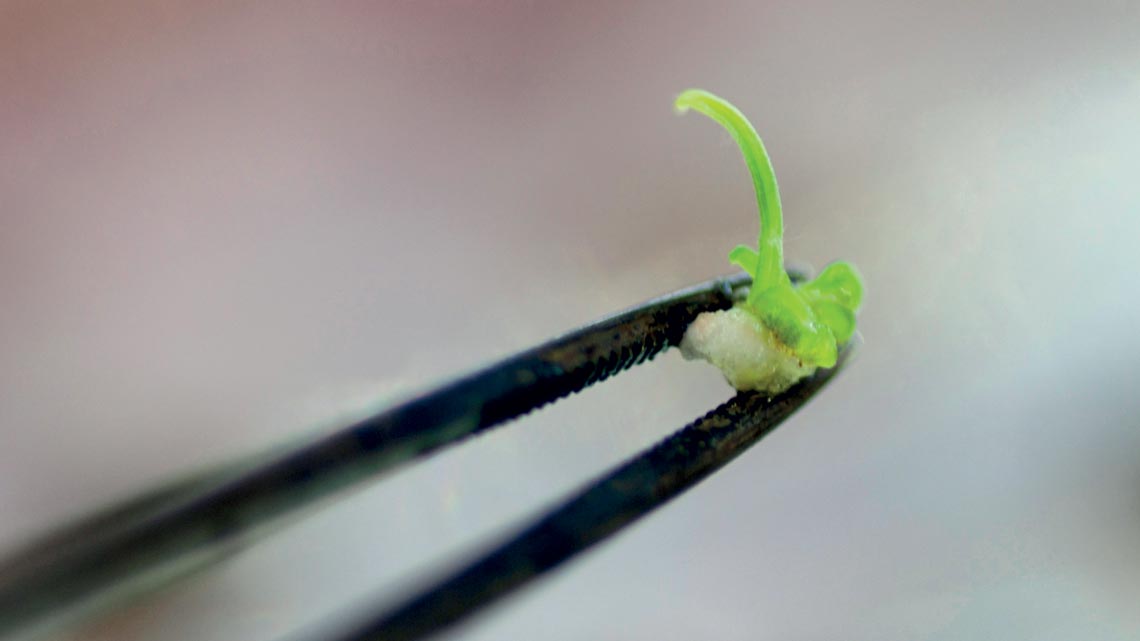 The biggest threat to sugarcane cultivation in Brazil—responsible for an estimated R$5 billion in losses each harvest—is a pest insect slightly more than 20 millimeters long, the larval stage of the Diatraea saccharalis moth, widely known as the sugarcane borer. Now São Paulo company PangeiaBiotech is using even smaller organisms together with genetic engineering tools to combat it. The startup develops varieties of transgenic sugarcane that combine the expression of two proteins from the bacterium Bacillus thuringiensis (Bt) that act as bioinsecticides, with one gene extracted from another microorganism, Agrobacterium sp., which delivers greater tolerance to the herbicide glyphosate. Genes from the Bt bacteria have been used in transgenic processes aimed at biological pest control for over two decades, in a variety of plants.

Named BtRR, the technology was developed with support from the FAPESP Research for Innovation in Small Businesses program (RISB, or PIPE in the Portuguese acronym), the Brazilian Agency for Industrial Research and Innovation (EMBRAPII), and the Brazilian Agricultural Research Corporation (EMBRAPA), the latter of which is conducting tests on experimental fields in Brasília. Their next step will be to find business partners interested in licensing the technology. The startup is planning to bring the first variety to market by planting time for the 2022/23 harvest. “We hope to have 20% of the planted area in Brazil growing our transgenic sugarcane by 2030,” says agronomist Paulo Cezar de Lucca, who originated the project, and founded the company in 2015.

Glyphosate tolerance is an innovation in sugarcane agriculture. Farmers will be able to use less pesticide during production

The startup’s transgenic sugarcane, nurtured in the Technology-Based Business Incubator (INCAMP) at the University of Campinas (UNICAMP), is not Brazil’s first. The pioneer was a variety named CTC20BT, created in the laboratories of the Sugarcane Technology Center (CTC), an entity maintained by the producers and companies of the sugar-energy sector in Piracicaba, São Paulo. The CTC20BT variety was approved in 2017 by the National Biosafety Technical Commission (CTNBIO), a multidisciplinary governmental agency that evaluates genetically modified organisms (GMOs). The following year, the CTC had a second transgenic variety approved: CTC9001BT. These two varieties also employ a gene from the Bt bacterium, whose purpose is to express a specific Cry protein that acts as an insecticide. When ingested by the pest, the proteins bind to receptors in the insect’s intestine, causing fatal damage to the digestive system.

The new PangeiaBiotech varieties are taking a step forward in the technological evolution of sugarcane by utilizing two different Cry proteins. “Double transgenics already existed in crops such as corn and soybeans. Now we’re applying the approach to sugarcane,” explains de Lucca. Agronomist Hugo Molinari, a researcher at Embrapa Agroenergia and a project participant, believes the use of two proteins with insecticidal properties makes the technology more durable, reducing the risk that pests will develop resistance.

In addition to the dual transgenic insecticide modifications, the varieties developed by the São Paulo startup also incorporate the cp4-epsps gene from Agrobacterium sp., which is tolerant to the herbicide glyphosate. The bacterium is found naturally in the soil. “Glyphosate resistance is an innovation in sugarcane. Farmers will be able to use less pesticide during production. There isn’t a cane variety on the market that’s resistant to both the sugarcane borer and glyphosate at the same time,” de Lucca emphasizes. 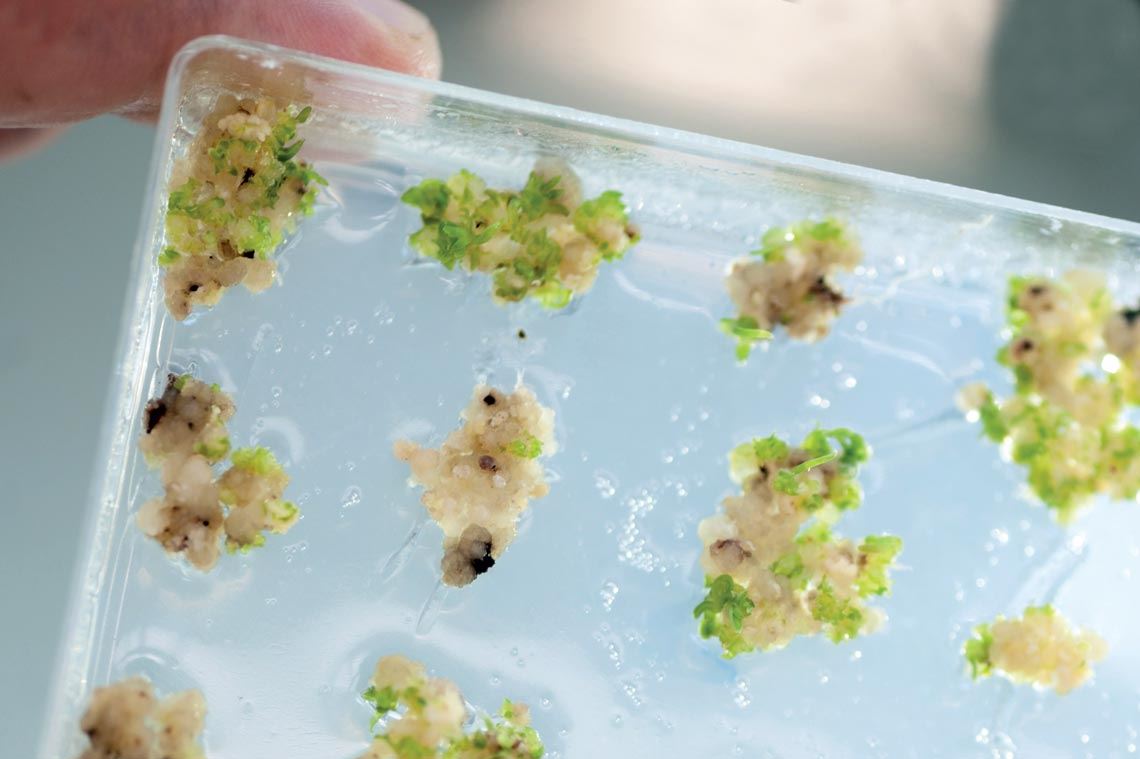 Two moments during the transgenic process: in vitro culture of embryogenic calluses, the target tissue for genetic transformation…Léo Ramos Chaves

He explains that growers are currently required to combat weeds by cautiously applying herbicide between the cane rows, since the product can also damage their crop. Tractors must be employed to do the work, in an operation that’s time-consuming and expensive, mainly due to the cost of diesel fuel. “If the cane were resistant to the herbicide, the producer could spray from the air, saving on fuel costs,” says the creator of PangeiaBiotech. They would also use less pesticide, Molinari adds.

Another innovation in development at PangeiaBiotech is a transgenic sugarcane variety that, in addition to being resistant to cane borers and glyphosate, will be resistant to the Sphenophorus levis beetle, known as the sugarcane weevil. “With the advent of mechanization, sugarcane began to be harvested raw, without first burning the cane fields, which increases the incidence of pests, including Sphenophorus and spittlebugs. Previously they would die when the plantation was burned; now they burrow into the straw and multiply,” explains Molinari. The researcher says the damage caused by the sugarcane weevil is estimated at R$2 billion per year in Brazil and there is still no highly effective chemical or biological control available.

Once it has placed its BtRR varieties on the market, PangeiaBiotech will have consolidated a change in its business model. The company’s initial purpose was to offer genetic transformation services on plants, de Lucca says, along the lines of the American Plant Transformation Facility concept, which didn’t yet exist in Brazil. “This project has been achieved. We’re already serving around 25 research centers across Brazil. They send us their gene of interest and we return the modified plants four months later. This way, researchers can focus on discovering new genes and see the answer to their theories within a short time,” Lucca adds. In addition to sugarcane, the company conducts genetic transformations on tobacco, tomatoes, and corn.

In 2017, as a result of the company’s relationship with EMBRAPA Agroenergia—which was one of its customers at the time—the double-transgenic sugarcane project was launched, along with a change in the startup’s business plan. “The partnership with EMBRAPA allowed us to make a big leap forward. Now, the idea is to produce our own varieties,” states de Lucca. The entrepreneur intends to continue providing genetic-transformation services. 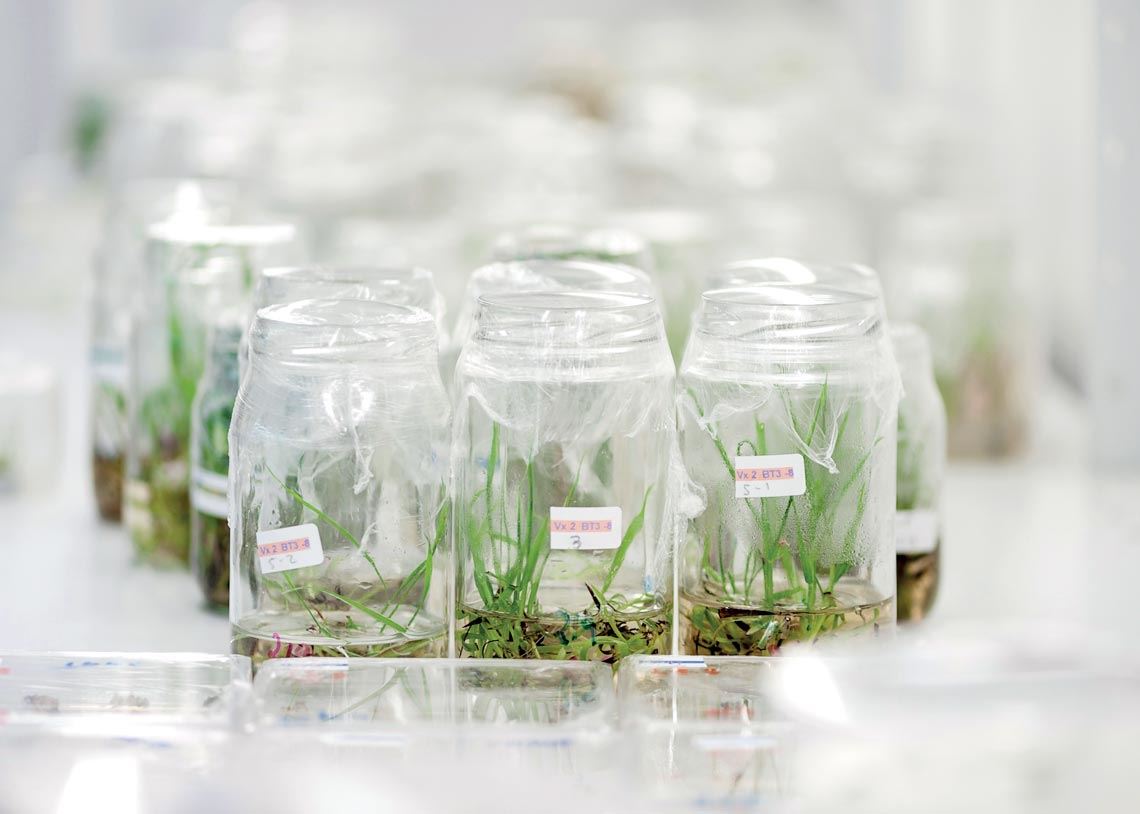 Clients include the UNICAMP Center for Molecular Biology and Genetic Engineering (CBMEG), the Sugarcane Center at the Campinas Institute of Agriculture (IAC), and the Interuniversity Network for the Development of the Sugar-Energy Sector (RIDESA), which unites ten federal universities. According to Monalisa Sampaio Carneiro, a professor from the Agrarian Sciences Center at the Federal University of São Carlos (UFSCar), which is part of the network, RIDESA is responsible for developing more than half of the varieties grown in Brazil, which are obtained using genetic improvement techniques, i.e., by crossing plant varieties. RIDESA is now using PangeiaBiotech’s transformation services to obtain transgenic versions of its current varieties. “By receiving the plant already genetically transformed by PangeiaBiotech, researchers and companies working on sugarcane improvement can save as much as two years in their research,” says the researcher.

José Antônio Bressiani, an agronomist and agricultural director at the biotechnology firm GranBio, also relied on PangeiaBiotech’s services to develop a transgenic sugarcane variety that is currently in field testing. Less refined, with a higher fiber content, “energy sugarcane” is used for producing second-generation ethanol, which is produced from the cane straw and bagasse. The available commercial varieties were created using genetic improvement. Now, GranBio plans to launch a transgenic sugarcane, resistant to sugarcane borers and glyphosate, with the participation of PangeiaBiotech. The company is also developing another variety of transgenic energy sugarcane with genes targeted at drought resistance and increased biomass, with research supported by FAPESP.

Agronomist Gonçalo Amarante Guimarães Pereira, from the UNICAMP Institute of Biology (IB), believes startups such as PangeiaBiotech can play a key role in developing the Brazilian sugar-energy sector, with a focus on the global biofuel market. “Being small and agile, startups have a large capacity to innovate,” he observes.

Coordinator of the UNICAMP Genomics and Expression Laboratory since its creation in 1997 and GranBio’s lead scientist between 2012 and 2016, Pereira notes that in recent years the genetic improvement of sugarcane hasn’t guaranteed the same productivity leaps observed after the development of transgenic varieties in other crops, such as corn, soybeans, and wheat. “There is a limit to traditional genetic improvement,” explains the researcher. “A new plant takes about ten years to produce, while a new variant of a microorganism capable of attacking it can emerge in days.” With transgenics, says Pereira, it’s possible to develop varieties resistant to new diseases—which are therefore more productive—in less time when compared to conventional genetic improvement work. 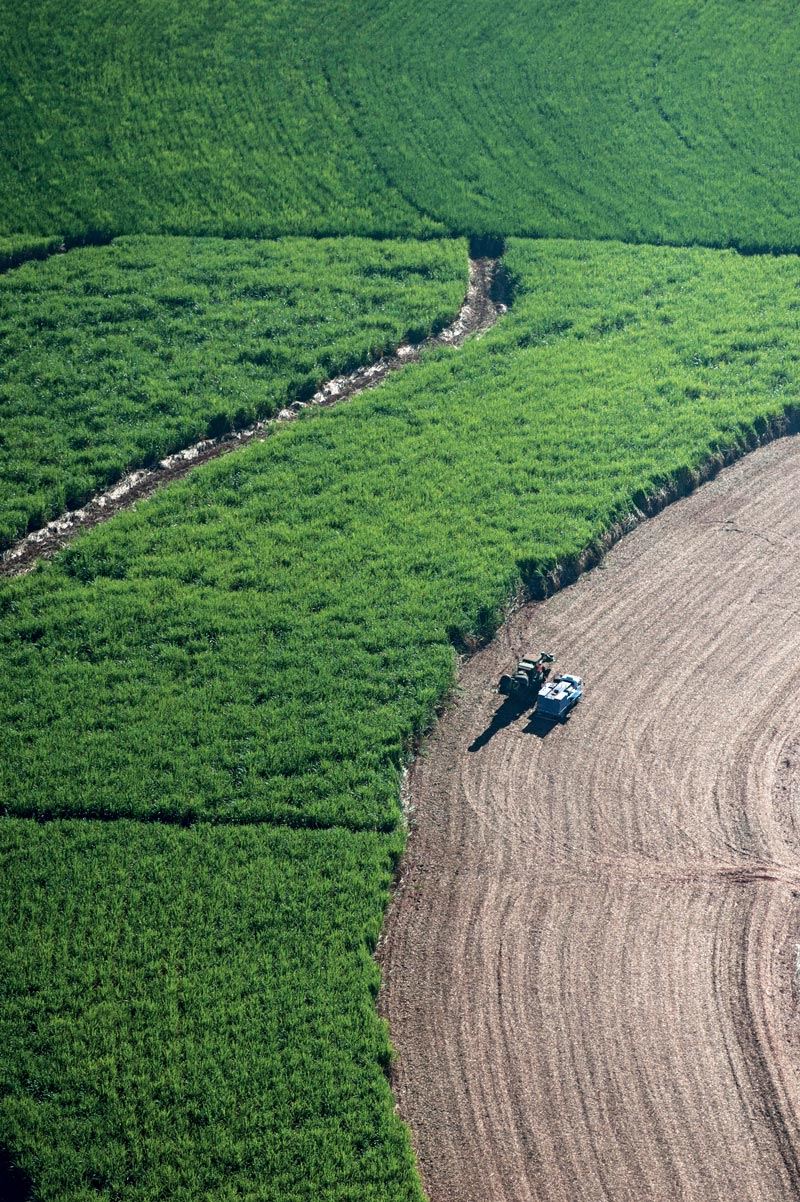 A sugarcane field in the municipality of Ipeúna, São PauloLéo Ramos Chaves

Although there are hundreds of varieties of sugarcane grown according to varying climate and soil conditions (with only about 20 dominating the market), productivity has remained more or less static in recent years. Now, a quarter of a century after the first Bt varieties appeared in American corn and cotton fields, PangeiaBiotech hopes to contribute to changing this scenario.

There is both a commercial and a scientific explanation for this delay in sugarcane innovation, in the researchers’ opinions. Molinari, from EMBRAPA Agroenergia, notes that sugarcane cultivation, although important for Brazil’s energy grid, doesn’t represent a large enough market to interest multinationals to invest in researching it. “Sugarcane cultivation isn’t global; its farming is restricted to the tropics. Compared to the enormous soy or wheat market, it’s quite small.”

The scientific explanation stems from the complexity of the study subject. “The sugarcane genome is far more complex and extensive than that of the other crop plants,” says biologist Michael dos Santos Brito, from the Institute of Science and Technology at the Federal University of São Paulo (UNIFESP). Not coincidentally, it was only at the end of 2019 that the most complete sequencing of the plant’s genome was completed: 373,869 mapped genes, corresponding to 99.1% of the total (see Pesquisa FAPESP issue no. 286).

The sequencing was the result of the FAPESP Bioenergy Research Program (BIOEN), launched in 2008 to stimulate bioenergy production in Brazil. Also within the BIOEN scope, Brito is developing a project to identify and characterize new sugarcane gene promoters, the DNA sequences responsible for regulating gene expression. With this project, he intends to create a database that can be useful for further research. “Sugarcane is not a simple plant; it requires a lot of resources to research it. We need to take advantage of the know-how that we’ve developed so far, and which has put us ahead of the whole world,” he states.