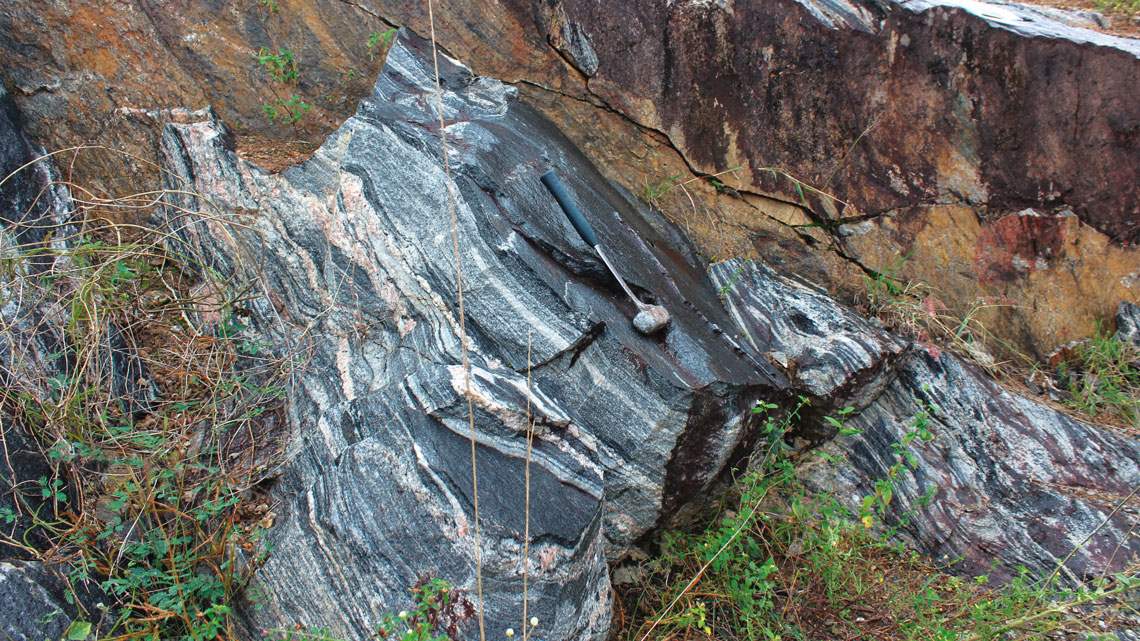 3.65-billion-year-old material found in the Chapada Diamantina region of Bahia

Just as the life of a person or family is recorded in documents, images, and objects, the planet’s distant past is preserved in rocks. Due to the deformation processes that occur over geological eras, rocks older than 3.5 billion years are very rarely exposed on the Earth’s surface, making them extremely difficult to find and study.

A group of Brazilian researchers, however, recently unearthed the oldest rocks ever found in South America. The discovery was made in Piritiba, a municipality in the Chapada Diamantina region of the state of Bahia. At 3.65 billion years old, the rocks date from the Eoarchean—the first era on the geological record for which the Earth has a solid crust, spanning the period between 4 billion and 3.6 billion years ago. When these rocks were formed, the Earth was just under 1 billion years old and the first forms of life were beginning to emerge.

“Finding such ancient geological samples in a tropical region like ours is almost a miracle,” says Elson Paiva de Oliveira, a geologist from the Institute of Geosciences (IG) at the University of Campinas (UNICAMP) and coauthor of the article describing the discovery, published in the journal Geoscience Frontiers in February. In places near the Equator, rock formations are more severely eroded due to high temperatures and abundant rainfall, making the preservation of such an old sample even rarer. The oldest geological samples ever identified on Earth are from Jack Hills, Australia (up to 4.4 billion years old), and Acasta, Canada (just over 4 billion years old).

The finding was not the first to be made by the researchers in the Chapada Diamantina region. In 2020, a study led by Oliveira and a subsequent article published in the scientific journal Terra Nova reported on the discovery of 3.64-billion-year-old rocks, 10 million years younger than those described in February of this year. They were also found on the outskirts of Piritiba, in the São Francisco Craton. A craton is a large block of continental crust that has remained fairly stable for a long period of time. The earlier initial finding was the starting point for the latest study. 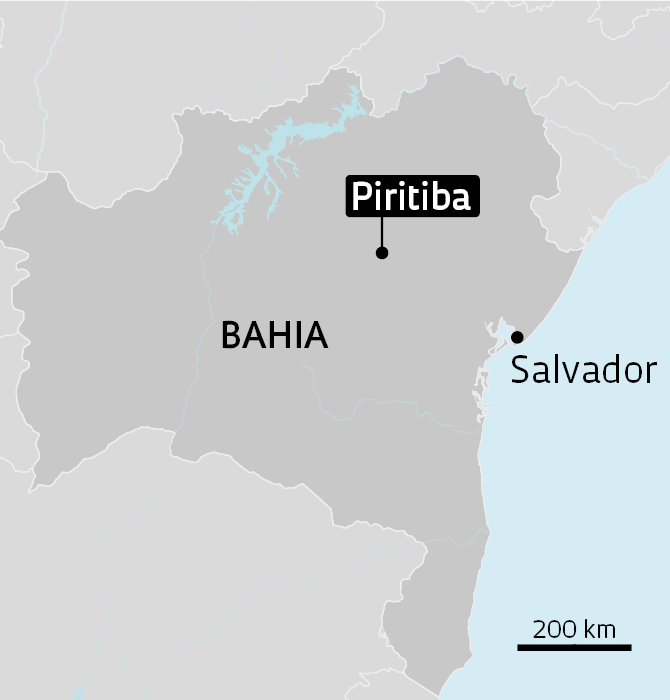 “We decided to search the region from north to south and we found even older rocks, as well as a series of others that tell the story of how our continent was formed,” explains geologist Igor Moreira, who is Oliveira’s PhD advisor and lead author of the latest article. In addition to the Eoarchean rocks, the paper describes geological samples from two other eras: the Paleoarchean, from 3.6 billion to 3.2 billion years ago, when the continents began to form; and the Neoarchean, from 2.8 billion to 2.5 billion years ago, the period when the first bacteria began to evolve. “With all these samples, we were able to unravel the ancient history of the continents,” says Moreira.

The area where these ancient rocks were discovered covers approximately 400 kilometers in the east of Chapada Diamantina, between the municipalities of Juazeiro and Ruy Barbosa. This region, known by geologists as the Mairi Complex, is part of the northeast section of the São Francisco Craton. One of the earliest forms of continent to appear on the planet, the huge craton stretches from Brazil’s Southeast all the way to its Northeast. Starting from Belo Horizonte, it covers Brasília, Salvador, and almost reaches Aracaju, the state capital of Sergipe.

The São Francisco Craton is one of the oldest evolving land masses on the planet, with extremely well preserved surface rocks. These outcrops eventually give rise to a type of metamorphic rock—created by the transformation of preexisting materials subjected to high temperatures and pressures—with a crystalline structure and usually arranged in bands, known as gneiss.

“Metamorphic rocks have undergone many geological processes. That’s why the oldest rocks on the surface are usually metamorphic,” explains Natali Barbosa, a geologist from the Federal University of Bahia (UFBA) who did not participate in the study of the samples from Piritiba. “Gneiss is usually formed at the base of mountain ranges and are found on the boundary between the earth’s upper and lower crust, at an approximate depth of 20 kilometers.” 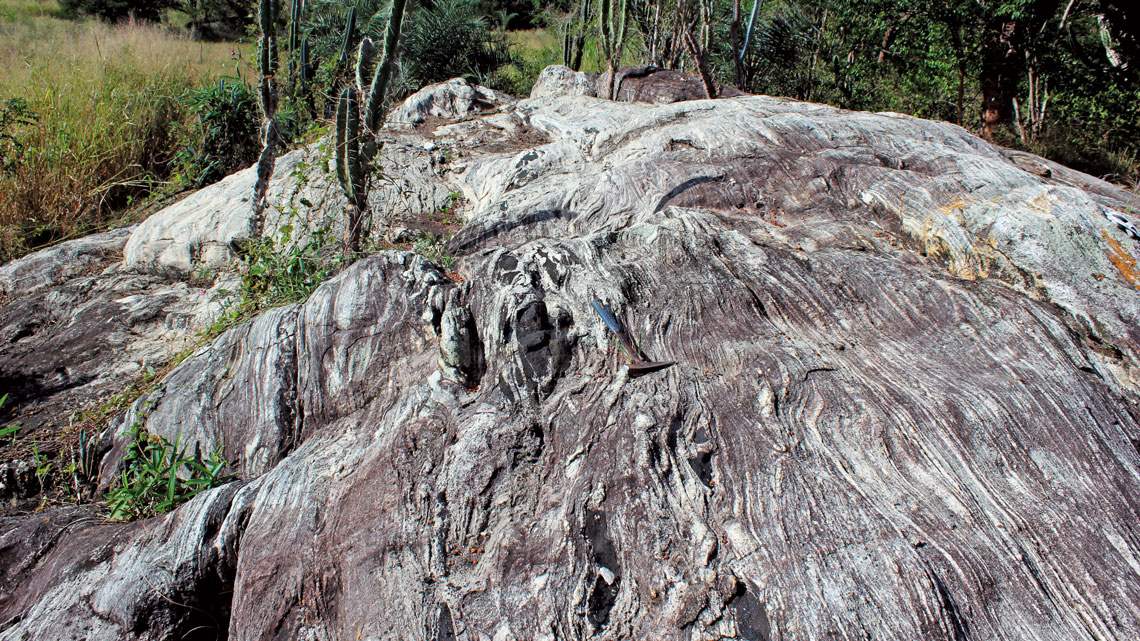 There are no visual or morphological markers that differentiate old rocks from more recent formations. To determine the age of the new samples from Piritiba, the scientists had to date the mineral zircon crystals present in the region. The age of a geological sample can be calculated based on the radioactive decay rate of heavy and light forms of uranium found in zircon. At the Geochronology Laboratory (LAGIS) at IG, UNICAMP, laser ablation was used, which involves perforating zircon crystals with a laser beam. “With this technique, we established that the samples were 3.65 billion years old,” says Oliveira.

Studying rocks as old as those found in Piritiba—or older—is important to shed light on exactly what happened in Earth’s early years, information that could be useful in efforts to project the planet’s future. The 4.4 billion-year-old samples found in Australia, for example, provided clues about the presence of water on the earth’s surface just over 100 million years after the planet was formed. Not everything was fire and lava in the infancy of Earth, which formed 4.56 billion years ago.

Oliveira believes that as well as being scientifically important, the oldest geological samples from Chapada Diamantina should also be seen as natural and cultural heritage of the region. “Convincing the authorities in Piritiba of the importance of these rocks was not an easy task,” says the UNICAMP geologist. “In September, the municipality will celebrate 70 years since its political emancipation, and the existence of this geological rarity in the region will be highlighted. Areas of geological interest attract tourism and have the potential to improve local education.”