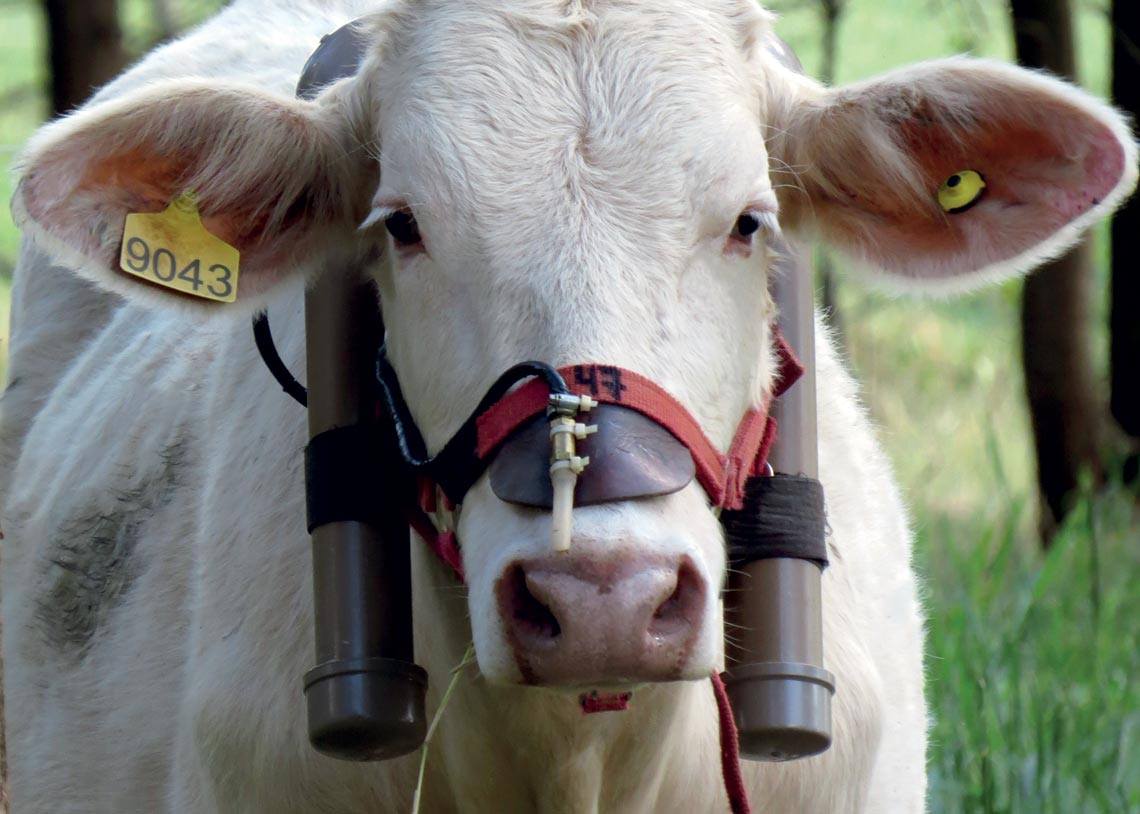 According to experts, the predominant livestock model in Brazil—where cattle are raised on large areas of planted or natural pasture—offers great potential for mitigating greenhouse gas (GHG) emissions through photosynthesis. When poorly managed, however, this system results in low productivity and land degradation, and a constant need to seek new pasture areas. It is estimated that around 82 million hectares (ha) of Brazil’s pasture area—about half of the total—shows some degree of degradation.

One of the most promising ways to reduce GHG emissions in livestock farming is to manage soil and pasture more efficiently. “Inadequate pasture management, mainly caused by not adjusting the stocking density [number of animals per ha] in response to the forage available, together with a lack of fertilization and supplementation of the animals’ diet in periods of forage shortage, are the main factors that increase greenhouse gas emissions and soil degradation, which also contributes to the emission of CO2 [carbon dioxide],” says Ricardo Andrade Reis, a zootechnician from the School of Agrarian and Veterinary Sciences at São Paulo State University (UNESP), Jabuticabal campus.

Reis leads a project funded by FAPESP that is studying management strategies for reducing the environmental impacts of beef cattle production systems. “Managing pastures to avoid elongation of stems and growth of leaves, which have a high fiber content and are thus less easily digestible, has been used with success in our research,” says Reis. “Enteric methane [CH4] emission is highly related to fiber-rich forage intake, which leads to the development of methanogenic [methane-generating] organisms in the rumen.” An article describing the results of the study was published in the journal Agronomy in 2020.

Research carried out by the Brazilian Agricultural Research Corporation (EMBRAPA) with funding from FAPESP also concluded that raising cattle in properly managed pasture areas with the appropriate number of animals per ha can increase carbon sequestration. The study, described in the scientific journal Animal in 2020, showed that steers—young cattle in the growth phase—raised under this system had a positive impact on the environment, equivalent to the annual growth of six eucalyptus trees.

According to Patrícia Perondi Anchão Oliveira, the agronomist who led the study, the performance was obtained in the Atlantic Forest biome, on a ranch where a previously degraded pasture area was recovered with chemical correctives and fertilizers. The area was occupied with 3.3 animal units (AUs) per ha—one animal unit corresponds to 450 kg of live weight. The carbon balance was calculated based on GHG emissions from animals and from the manufacturing and application of fertilizers. 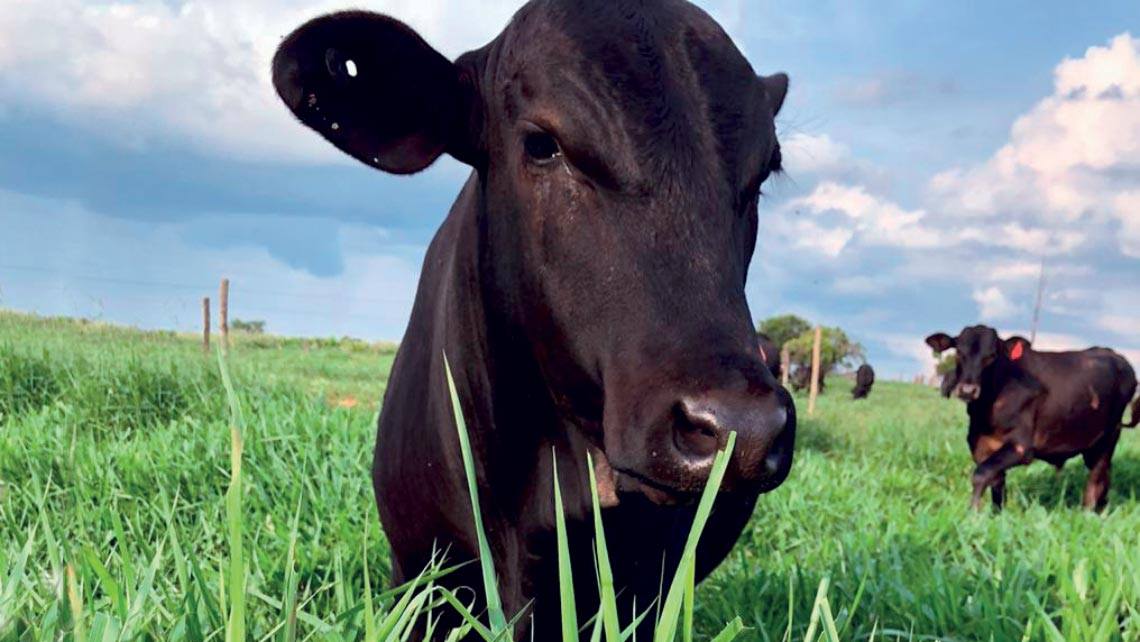 In a degraded area where correctives and fertilizers are not used and the occupation is 1.4 AU/ha, 64 trees need to be planted for each steer to balance the emissions. “Cattle farming with proper pasture management and occupation can even generate a carbon surplus, while raising animals in degraded areas results in poor economic performance and a high environmental impact,” says Anchão.

Recent tests carried out at ESALQ, with funding from FAPESP, have also revealed the benefits of well-kept pasture areas. “A study of dairy cattle showed that it is possible to increase daily milk production per cow by 15%, increase pasture stocking rate by 33%, and increase milk production per ha per day by 51% just by putting the animals out to graze at the right time [when the pasture is at the appropriate height],” says agronomist Sila Carneiro da Silva, one of the coordinators of the study.

According to Silva, there was also a 21% reduction in enteric methane emission by the cows—measured in grams of CH4 per liter of milk produced—and an approximately 40% decrease in nitrous oxide emission from the soil compared to inadequate pasture management. “Correcting when animals are put out to graze and removed from the pasture is a zero-cost technology. There is no need for any new investment,” says Silva. The results of the research, carried out as part of agronomist Guilhermo Congio’s PhD, were published in the journal Science of the Total Environment in 2018 and 2019.

Cattle burps
While cattle ranchers are making progress in the development of more efficient farming systems that provide a sustainable balance of GHG emissions, they are facing another more complex challenge: how to reduce emissions inherent to cattle farming, such as the gases generated in the ruminant digestive process and released by belching. 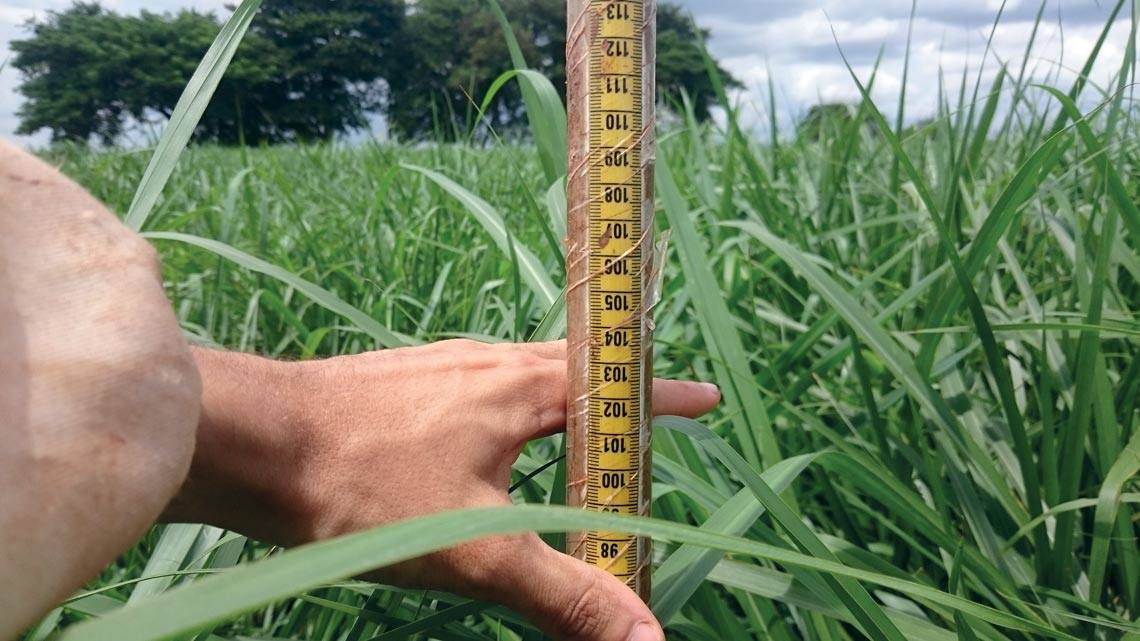 “Scientists are looking for ways to directly manipulate the fermentation process to reduce methane emissions,” explains Alexandre Berndt, a researcher at Embrapa Southeast Livestock in São Carlos, São Paulo. Two approaches are being studied at research centers around the world: the first is food that is more easily digestible by cattle, and the second is nutritional dietary additives that reduce the emission of potentially harmful gases.

The challenge in researching food additives is to create alternative substances that reduce CH4 generation without impacting the health and food safety of the animals. One promising ingredient with great potential to reduce enteric methane emissions is the solvent bromoform, which is found naturally in a microalgae called red algae (Asparagopsis taxiformis), common in Australia. In March 2021, scientists from the University of California in the USA and James Cook University in Australia published an article in the journal PLOS One showing that adding red algae to the diet of beef steers can reduce methane emissions by up to 87%, with no impact on their weight gain.

In the Netherlands, DSM Animal Nutrition & Health developed an organic compound called 3-nitrooxypropanol (3NOP), which is formed of nitrate and a biological type of alcohol and sold under the trade name Bovaer. Giving ruminants one teaspoon of the additive per day can have an impact on the microorganisms in the rumen and reduce methane emissions, Gareth Mead, senior director of global communications at DSM, told Pesquisa FAPESP.

It took a decade to develop 3NOP, with 50 scientific articles published on the topic. According to the company, enteric emissions are reduced by around 30% in dairy cows, but the impact can be even greater in beef cattle, at around 90%. A study led by Reis from UNESP found that the additive can reduce methane emissions in Nelore bulls by more than 40%. The results were published in the Journal of Animal Science in November 2020.

In September 2021, Brazil and Chile were the first countries to approve the product for sale. The European Union later followed suit and authorized Bovaer for commercial use. Mead pointed out that DSM has not yet started selling the product, but it plans to do so in the next few months. 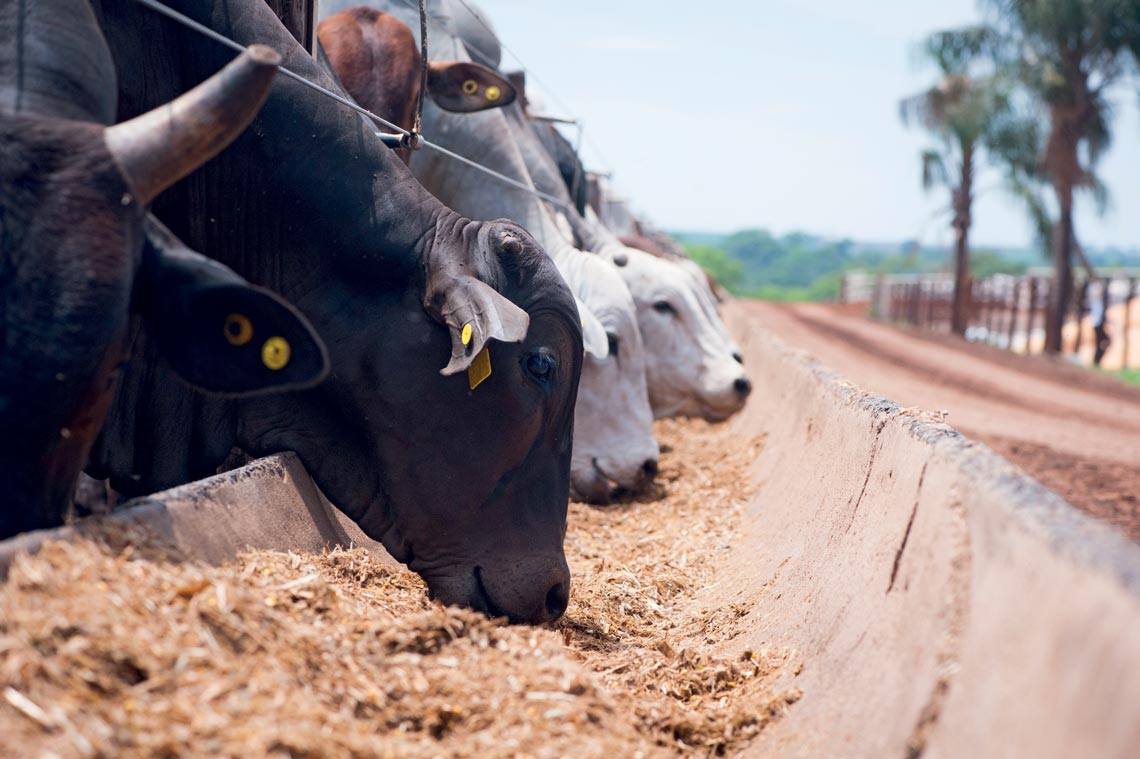 Another line of research into additives is studying tannins, a type of polymer found in acacia, fruit, and leguminous trees. “Tannins are antimicrobial and can potentially reduce the degradation of food proteins in the rumen, leading to a reduction in methane production,” explains Renata Helena Branco Arnandes, a doctor of zootechnics from the Zootechnic Institute (IZ), linked to the São Paulo State Department of Agriculture and Food Supply.

In 2021, with funding from FAPESP’s State Research Institute Modernization Program, IZ inaugurated a Laboratory for Ruminal Fermentation and Beef Cattle Nutrition. One of the lab’s first tasks was to validate and test a tannin-based additive developed in partnership by Italian company SilvaTeam, which created the active ingredient, and Brazilian food-processing company JBS. The aim was to establish the absolute methane reduction provided by the additive and to obtain data on the appropriate dosage.

“Silvafeed has already been sold in several countries, including Brazil, but it was our research that demonstrated its impact on methane emissions,” says Arnandes. “Adding this molecule [the tannin-based additive] to the diet decreased enteric methane emissions by about 10% compared to cattle given a control diet.”

The IZ is also partnered with the School of Veterinary Medicine and Zootechnics (FMVZ) at the University of São Paulo (USP) and EMBRAPA for a project funded by FAPESP to investigate ways of mitigating livestock GHG emissions. The research is being led by Paulo Henrique Mazza Rodrigues, a veterinarian from FMVZ.

One of the main areas of study is the use of forage reserves (grasses and legumes) as feed in the winter and dry period, in combination with protein supplementation with salt and nitrate instead of the traditional mineral supplementation of salt and urea. Nitrate, like urea, is a source of nonprotein nitrogen for cattle. The difference is its potential to dissipate hydrogen in rumen fermentation, reducing methane production.

The two institutions are also working together to research foods that are easier to digest and that result in lower GHG emissions. One study is examining the use of integrated legume and grass pastures. The most promising approach appears to be to combine the grass Brachiaria brizantha with legumes such as Macrotyloma axillare and Cajanus cajan. The mixture improves biological activity in the soil and increases carbon stocks and pasture productivity. Despite the potential improvements to productivity and sustainability offered by intercrop pastures, the practice is still not widely used due to a lack of knowledge of the subject in Brazil.