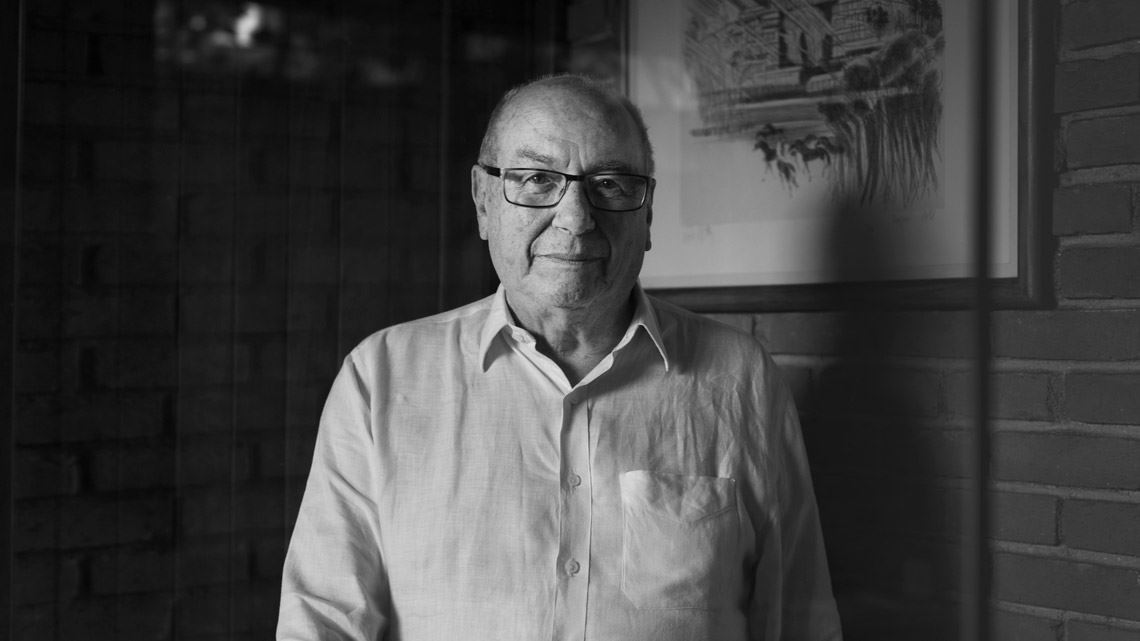 With an intellectual trajectory of over 60 years, José Arthur Giannotti built bridges between the philosophy of logic and contemporary language and more traditional strands of philosophy, such as Marxism and phenomenology, proposing interpretations and drawing original conclusions from the works of authors such as Karl Marx (1818–1883) and Ludwig Wittgenstein (1889–1951). Beyond his philosophical legacy, he played a central role in structuring one of the most important research institutions in the human sciences, trained generations of scientific researchers, and actively participated in political and cultural debates relevant to Brazilian society. A professor emeritus of the University of São Paulo (USP), Giannotti died on July 27th, at the age of 91. He was survived by a son and two grandchildren.

Giannotti was born in São Carlos and, at the age of 9, moved with his parents and two brothers to the São Paulo capital. In 1950, he was admitted into the philosophy program at the former School of Philosophy, Sciences, and Languages and Literature. Six years later, he obtained a PhD scholarship from the Brazilian Federal Agency for Support and Evaluation of Graduate Education (CAPES) to attend the University of Rennes, in France, alongside philosopher Gilles-Gaston Granger (1920–2016). Upon his return to Brazil in 1958, he began teaching the philosophy of logic at USP and led a multidisciplinary study group on Marx’s Das Kapital. In 1966, Giannotti competed for a position as Associate Professor, presenting a thesis that later became his first book, Origens da dialética do trabalho – Estudo sobre a lógica do jovem Marx (Origins of the dialectic of labor – A study on the logic of young Marx). In 1970, he and other USP professors were forced to retire for political reasons by the military dictatorship (1964–1985). Alongside demographer Elza Berquó, sociologist Fernando Henrique Cardoso, and others, he founded the Brazilian Center of Analysis and Planning (CEBRAP), initially funded by the Ford Foundation. It was at CEBRAP that Giannotti consolidated his intellectual trajectory as a philosopher, professor, and debater.

In addition to his first book, Giannotti has written works on Marx such as Marx, vida e obra (The life and work of Marx; L&PM, 2001) and Certa herança marxista (A certain Marxist inheritance; Companhia das Letras, 2001). Among his other notable works are Exercícios de filosofia (Exercises in Philosophy; Vozes, 1977), Trabalho e reflexão: Ensaios para uma dialética da sociabilidade (Work and thought: Essays on a dialectic of sociability; Editora Brasiliense, 1983), O jogo do belo e do feio (The game of ugliness and beauty; 2005) and Notícias no espelho (News in the mirror; Publifolha, 2011). In 2020, at the age of 90, he released Heidegger/Wittgenstein: Confrontos (Heidegger/Wittgenstein: Confrontations; Companhia das Letras).

The symbiosis between the history of philosophy and original philosophical thought is considered one of the hallmarks of his work.  “Drawing on his ample knowledge of the history of philosophy, Giannotti produced an original and consistent body of work,” says Luiz Henrique Lopes dos Santos, professor with the Philosophy Department of the School of Philosophy, Languages and Literature, and Human Sciences (FFLCH) at USP, member of the adjunct committees of the Scientific Board of FAPESP, and Giannotti’s constant debate partner for over half a century. “One way or another, he always obsessively sought among the classical authors elements that gave shape to his seminal idea, glimpsed in Origens da dialética do trabalho, sharply detailed in Trabalho e reflexão, and redefined under the impact of Wittgenstein’s work in Apresentação do mundo (Presentation of the world) and in his last book, Heidegger/Wittgenstein: Confrontos. It is the idea that the web of concepts that guides our rational contact with the world is not based on intellectual views or conscious acts, but in the sphere of practical life, in which certain basic staples of human actions and behaviors are formed and stabilized.”

Another hallmark of Giannotti’s thinking is his boldness. “He had a lot of admiration for Oswald de Andrade. He was an intellectual who had this avant-garde side, and to be avant-garde you have to be a little iconoclastic,” says Vinicius Berlendis de Figueiredo, a professor with the Philosophy Department at the Federal University of Paraná (UFPR). Giannotti was Figueiredo’s scientific research, master’s, and PhD advisor. In a statement made by Figueiredo to Agência FAPESP, this permitted Giannotti to dive deeply into several issues, without much fear of contradicting certain schools of thought. Philosopher Marco Zingano, from FFLCH-USP, points out that “Giannotti not only described the state of the art of certain philosophical questions, but went beyond, identifying new problems and creating opportunities for reflection.”

Drawing on his knowledge of the history of philosophy, Giannotti produced an original and consistent body of work

Philosopher Marcos Nobre, from the University of Campinas (UNICAMP) and current president of CEBRAP, believes Giannotti represents a generation that legitimized philosophy as a profession in Brazil, contributing to the debates around the modernization of the university. “As a teacher and friend, he was provocative and didn’t let anyone get comfortable,” he shares. His peers remember his love of debate. “Just as he was a harsh critic of his colleagues and friends, he accepted criticism like no other and even enjoyed getting feedback. He liked to debate and believed that only through dialogue was it possible to learn. He had a strong moral commitment to intellectual honesty above vanity, and he instilled this commitment in several generations of researchers,” Lopes dos Santos told Agência FAPESP.

As president of CEBRAP, Giannotti helped diversify the institution’s areas of focus. Esther Hamburger, from the USP School of Communications and Arts (ECA) and member of the FAPESP Scientific Board, recalls that Giannotti took over the presidency of the institution with the goal to expand and update the scope of research to include themes close to post-structuralist thoughts, such as culture and social movements. In 1986, Giannotti conceived and led a multidisciplinary program at CEBRAP. Graduate students from different areas would send in their resumes and were selected through interviews. “Many of today’s leading researchers in the humanities went through this program. They all learned from Giannotti the value of interdisciplinary research. He pushed people out of their comfort zones. Everyone was scared of him and loved him at the same time,” underlines Lopes dos Santos, who collaborated with Giannotti on the initiative.

Philosopher João Carlos Salles, dean of the Federal University of Bahia (UFBA), recalls that Giannotti used to travel all over the country to give courses and lectures. “He contributed to the establishment of philosophy throughout Brazil,” he notes. “Gianotti was an intellectual giant. In addition to his enormous contributions to philosophy and politics, he stimulated the debate about good public universities, always improving them and valuing the social role of quality higher education,” says engineer and physicist Carlos Henrique de Brito Cruz, Senior Vice President of Research Networks at Elsevier and Scientific Director of FAPESP from 2005 to 2020.

His friend for 50 years, the political scientist Lourdes Sola, a retired professor from FFLCH-USP, points out that Giannotti sought to think philosophically about the political reality of Brazil. “A month ago, though already in poor health, he offered to make some pasta at my home for two of our friends with whom we had regular conversations,” says Sola, pointing out the philosopher’s culinary skills. Lopes dos Santos recalls that, in his large home in the Morumbi neighborhood, “Giannotti used to cook for many icons of French philosophy, such as Gilles-Gaston Granger and Michel Foucault (1926–1984).

His influence on his colleagues and students is highlighted by sociologist Ângela Alonso, from FFLCH-USP, former president of CEBRAP and member of the adjunct committees of the FAPESP Scientific Board. “Giannotti was a force of nature due to his personality and a force of culture due to his work. He was also a demanding teacher; he never accepted parroted ideas nor simple reasoning and was blunt in his criticism. But he was also generous, willing to discuss a new student’s work for hours, suggesting new readings, angles, and approaches.”