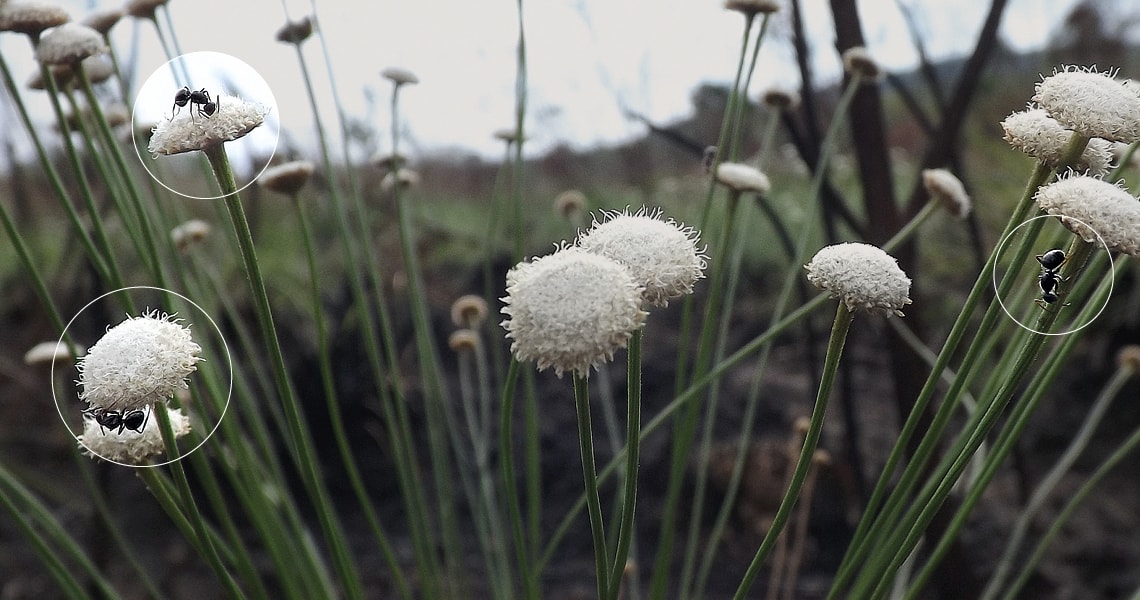 Research by Brazilian and Mexican biologists indicates that ants act as important pollinators of some plants in the Brazilian Cerrado (wooded savanna region). Fieldwork carried out in the south of Minas Gerais suggests that the insects, which are rarely associated with this ecological role, can provide a vital service to the reproduction of a certain evergreen species typical of this biome. Ants of the species Camponotus crassus were the most common visitors to the flowers of Paepalanthus lundii, ahead of stingless bees and flies, according to a study published in the scientific journal Annals of Botany in June last year. “The results suggest that the ant is not the only pollinator of this plant in the area we studied, but it is the most effective,” says ecologist and lead author of the study Kleber Del-Claro, from the Federal University of Uberlândia (UFU).

One and a half months of periodic observation at an ecological station in Uberlândia found that 43% of visits to the flowers of 35 evergreen specimens were made by the ants. The second most frequent visitors were bees of the genus Melipona, accounting for just over 10% of the total, and flies of the genus Muscidae, with 9.5%. The rest of the visits were made by flies, bees, and ants of other genera, as well as true bugs, beetles, and scarabs. Each plant analyzed during the experiment was pollinated by an average of 3.28 Camponotus crassus ants. For the Muscidae flies, Melipona bees, and other species of ants such as Pseudomyrmex gracilis and Crematogaster erect, an average of 1.3 visits per plant was recorded.

The fieldwork also revealed that the same ant can climb more than one stem of a plant, or even different plants, in less than 30 minutes. After visiting the flowers, pollen stuck to their heads, ventral thorax, and antennae, a process that is essential for pollination to occur. The interaction between the plants and the ants takes place in an arid habitat. The evergreens studied are low, with flowers close to ground that sprout in groups. Fruiting occurs within a short timeframe, just a few weeks after pollination.

Although there are various known beneficial interactions between plants and ants, pollination is rarely cited as one of them. This role is usually associated with bees, flies, bats, birds, and even the wind. A 2009 study by Spanish researchers suggests that ants are the main pollinating agents of roughly 50 Mediterranean plant species. But this type of research is rare. Del-Claro decided to study the topic while a colleague from Mexico was visiting in September 2014. Dulce Rodrigues-Morales, at the time a master’s student at the National Institute of Ecology in Mexico, visited Uberlândia for about a month and a half, with plans to study interactions between spiders and flowering plants. However, a long fire destroyed part of the original study area and the initial plan was abandoned.

A few days later, the rainy season began, as is normal in the Triângulo Mineiro region during the spring. Having frequented the area for almost 30 years, Del-Claro knew exactly what would happen in the following days.

“After the fire, with the arrival of the rain, the plants located in the transition area between the veredas [swampy or wet areas] and the Cerrado tend to regenerate and blossom,” says the UFU researcher. “I have always observed many ants in the region, and fires tend to scare away bees, so I wondered if perhaps ants could be the primary driver of the pollination.”

This question became her new research hypothesis, and together with Del-Claro, they began an investigation. They designed scenarios that could be used to test whether ants help to fertilize plants. “Setting up the experiments was simple, the results were robust, and we were able to show that after a fire, ants perform an important role in pollination,” explains Rodrigues-Morales, currently a professor at Universidad Veracruzana, Mexico.

The field study involved four different scenarios. In the first—the control group—evergreen specimens were left fully exposed, to be pollinated by ants, which arrive over land and climb up the plant, or by bees, which fly through the air to land on the flower directly. In the second, entire plants were bagged, blocking both ground access for ants and aerial access for bees and flies. In the third experiment, the plants were covered with a kind of shelter that stopped aerial visitors from being able to approach, but did not make contact via the ground, meaning ants were still able to pass underneath and climb the stems. In the fourth scenario, a circular piece of plastic was placed in the ground around the plants, to a height of 10 centimeters. Ants were thus unable to visit the plants, while bees and flies retained clear air access. After a month of fieldwork, during which 35 plants were observed twice a day (once in the morning, once in the afternoon), the results showed that Del-Claro’s hypothesis was correct.

“The apparent simplicity of the experiments actually reflects an extremely efficient study,” says entomologist Carlos Roberto Ferreira Brandão, a professor at the Zoology Museum of the University of São Paulo (MZ-USP) and director of the institution’s Museum of Contemporary Art. “The test scenarios that the plants and insects were subjected to generated strong results that soundly support the conclusions of the study.” For the USP researcher, who specializes in ants, studies like these pave the way for new research. “Compared to other organisms, ants are not seen as major pollinating agents. This study shows that they can play a more important role than most people recognize. Ants maintain relationships with plants. They protect them from herbivores, and in return, they feed on substances produced by the glands,” says Brandão. According to him, there is no other known function for these substances, other than as food for insects.

There are also no records of plant structures whose main function is to attract ants to pollinate them, an adaptation that occurs in some plant species visited by bees, flies, and other pollinating agents. “This does not mean that ants cannot play this role, but that they may not be as important as other organisms to this function,” says the USP entomologist.

There are four reasons regularly cited to explain why ants are so rarely seen as important pollinating agents. The first is related to their body size, since they are usually smaller than the floral structures, which makes it difficult to transfer pollen. The second is that ants are known to clean themselves, which would remove pollen from their body. The third is the limited displacement that these terrestrial insects create, especially when compared to bees, flies, and birds. Finally, there is something known as the antibiotic hypothesis. “Ants with metapleural glands produce a substance that attacks fungi and bacteria, which can also affect the viability of pollen,” explains Del-Claro.

The ants studied in Uberlândia, however, seem to overcome these obstacles without any major problems. The Camponotus crassus, extremely abundant in the Cerrado of Minas Gerais, is about 2 centimeters long, allowing contact with all floral structures. A study of ants in their colonies, which are underground, also showed that the pollen remained attached to the insects’ bodies. It is therefore evident that their self-cleaning behavior does not prevent them from carrying pollen between the flowers of the evergreens. Finally, ants of this species do not have a metapleural gland, so they do not produce any substances that are toxic to pollen. The results obtained in the Cerrado encouraged the researchers to continue studying the oft-neglected role of ants in plant pollination, especially in arid environments. “We are going to replicate the experiment in Mexico with other plant species from the Eriocaulaceae family [the same family as the Uberlândia evergreen],” says Rodrigues-Morales.

In the control group, the evergreen was left without any kind of protection, open to pollination by ground and air insects alike.

In the second scenario, the plant was covered by a bag that blocked both terrestrial access by ants and aerial access by bees and flies.

In the third group, the plants were covered by a type of shelter that prevented them from being fertilized by flying insects, but still allowed ants to visit. The fourth scenario was the reverse: a circular piece of plastic was placed on the ground around the plants, to a height of 10 centimeters. Ants were thus unable to visit the plants, while bees and flies retained clear air access. At the end of the study, it was found that Camponotus crassus ants were the number one pollinating agent of the evergreen, responsible for more than 40% of visits to the plants.