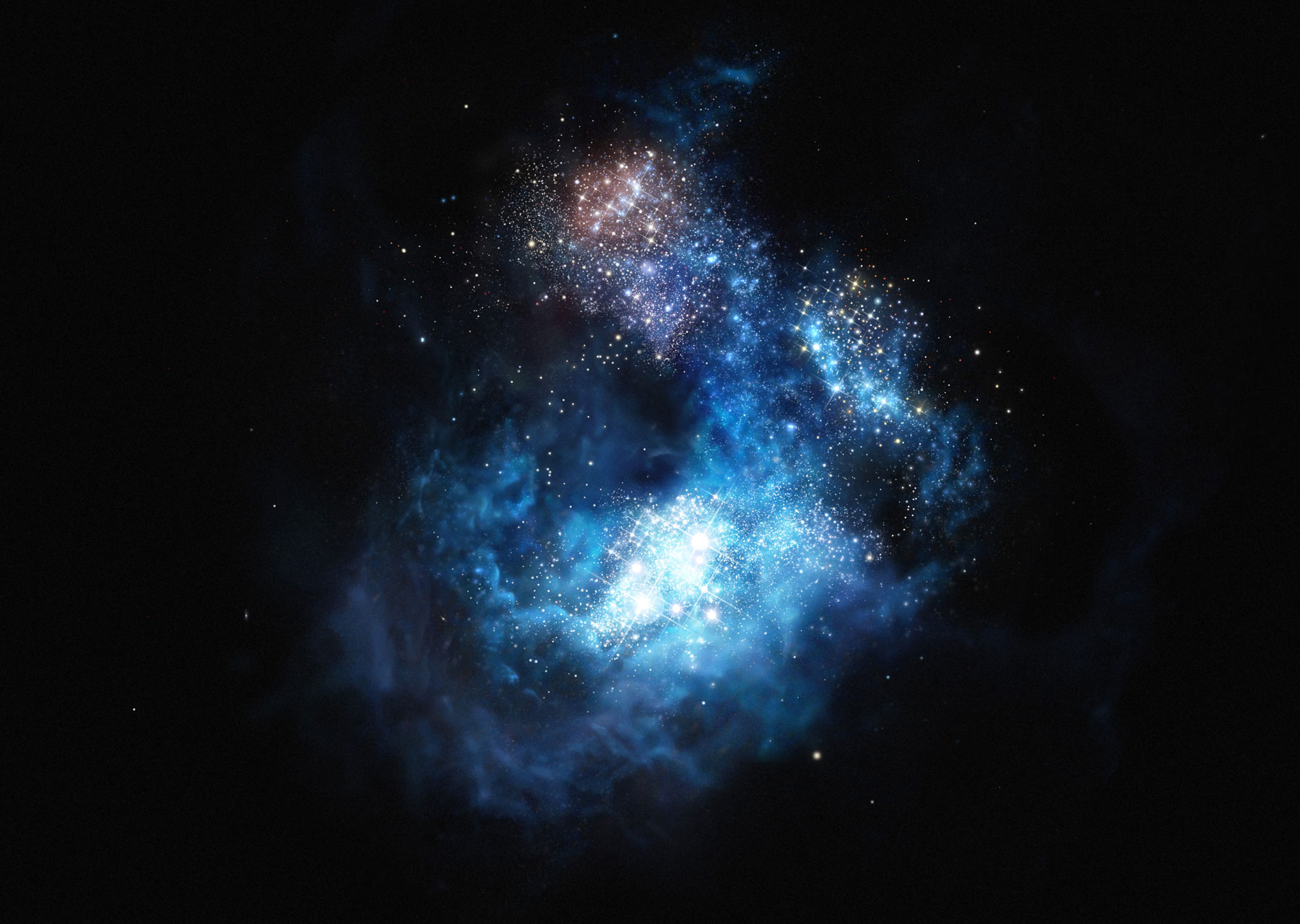 Artistic representation of galaxy CR7 and its primordial black hole

The nebulous shapes that astrophysicist Oli Dors, from Vale do Paraíba University (UNIVAP) in São José dos Campos, São Paulo State, has been focusing on for the last year are actually the best images of some of the oldest galaxies in the Universe, captured by the most powerful telescopes on the planet. The light from these formations took 13 billion years to reach Earth. The blurred images offer a glimpse of the galaxies as they appeared just 700 million years after the Big Bang. “The images are low quality because although the galaxies are very bright, they are so far away,” Dors laments.

Nevertheless, it was by analyzing these images, obtained by several space and ground telescopes, that Dors, working with astrophysicist Bhaskar Agarwal, from the University of Heidelberg in Germany, and six other colleagues, identified three distant galaxies with a peculiarity—they appear to contain primordial black holes with masses up to one billion times greater than the Sun, something not envisaged by classical theory on these celestial objects. One of these galaxies is one of the most distant and brightest ever discovered, known as Cosmos Redshift 7 (CR7), which formed 12.9 billion years ago and is in the Sextans constellation. The name is a tribute to Portuguese soccer star Cristiano Ronaldo, who is known by the same acronym.

Instead of being formed by imploding stars, as is the case with other black holes, primordial black holes may have been created when immense clouds of gas that accumulated in the nascent Universe collapsed under their own weight. This alternative scenario explains how the first black holes may have formed before the first stars existed. “Other black holes may somehow have descended from these primordial ones,” says Dors. The group published a scientific paper on the topic on June 26, 2018, in the journal Monthly Notices of the Royal Astronomical Society.

The partnership between Dors and Agarwal began in July last year, when the Brazilian was visiting Heidelberg. Agarwal has spent the last few years comparing theories on what are known as direct-collapse black holes based on observations of specific kinds of distant galaxies that emit huge amounts of ultraviolet radiation at a specific wavelength, which are well known to astronomers. This radiation is emitted when ionized hydrogen gas in the interstellar medium is heated in one of two extreme situations: when it is close to a group of young stars or near incandescent matter about to be swallowed by a supermassive black hole.

The UNIVAP astronomer had already successfully developed a method for analyzing the emission spectrum of galaxies near the Milky Way and distinguishing whether the predominant source of ultraviolet radiation was the heating of hydrogen by massive stars or a supermassive black hole. The pair then adapted this technique to analyze distant galaxies that could potentially offer signs of the presence of direct-collapse black holes. Of the dozens of distant galaxies that have been looked at by the world’s largest telescopes, only five had been observed with enough detail and precision to be analyzed by the method. Of these five, three showed signs that they may be home to supermassive black holes formed by direct collapse. “How supermassive black holes were formed in the early Universe is a mystery,” says João Steiner, an astrophysicist at the University of São Paulo (USP) who did not participate in the study.

Steiner refers to the conflicting results of recent studies, such as those obtained by Dors and Agarwal, and the most widely accepted theory on how supermassive black holes are formed. Until recently, most astrophysicists agreed that all black holes in the Universe were created the same way: when stars with a mass more than 20 times greater than the Sun collapse. When these massive stars run out of fuel at the end of their lives, they implode under their own weight, creating a region in space with such intense gravitational force that nothing can escape its surface, not even light: a black hole. When a black hole is born, its mass is close to that of the star that created it, but it gains mass by swallowing interstellar gas or even entire stars it encounters as it travels through space. It can also increase its mass by colliding and merging with other black holes.

Imploding stars
According to popular theory, the first black holes in the Universe were created by collapsing primordial stars, formed from the hydrogen and helium gas that constituted the whole Universe about 400,000 years after the Big Bang. It has previously been speculated that these first stars may have been giants weighing a thousand solar masses. But recent observations and calculations indicate that they probably weighed 100 solar masses at most. Simulations also suggest that even if they continuously swallowed gas, no black hole formed from the Universe’s first stars would have been able to reach more than a hundred thousand solar masses in less than 1 billion years. “Black holes that were formed by the collapse of individual stars did not have enough time to become supermassive by that point,” explains Steiner.

In 2003, in response to this dilemma, astrophysicists Volker Bromm, from the University of Texas at Austin, and Avi Loeb, from Harvard University, both in the USA, proposed an alternative explanation for the emergence of primordial supermassive black holes. They theorized that at about the same time that the first stars were forming in some regions of the Universe, there were specific conditions in other areas that allowed immense clouds of primordial gas to accumulate and collapse under their own weight, directly forming giant black holes. These direct-collapse black holes would have weighed from 100,000 to 1,000,000 solar masses at the time they were born, which could explain the findings now being observed in galaxies that were formed shortly after the Big Bang.

“The new study on primordial black holes is helping to establish connections between theory and observation,” said Aaron Smith, an astrophysicist at the Massachusetts Institute of Technology. In 2016, Smith, Volker, and Loeb claimed to have found evidence of direct-collapse black holes in galaxy CR7. “Both our findings and theirs should be considered as evidence based on limited data,” he says. Galaxy CR7 was first discovered by Portuguese astrophysicist David Sobral, from the University of Lancaster in the UK, who is well aware of the difficulty of observing these distant galaxies. The first images of CR7 obtained by the VLT ground-based telescope in 2015 suggested that the ultraviolet radiation in the galaxy was coming from three large clusters of primordial stars. The hypothesis was ruled out, however, after subsequent observations were made in 2017 with the Hubble Space Telescope and the ALMA radio telescope in Chile. Now, Sobral agrees with Dors and Agarwal that CR7 may contain a supermassive black hole. “But it is not possible to know for sure, partly because the observed spectral signatures of this type of object are so weak,” explains Sobral.