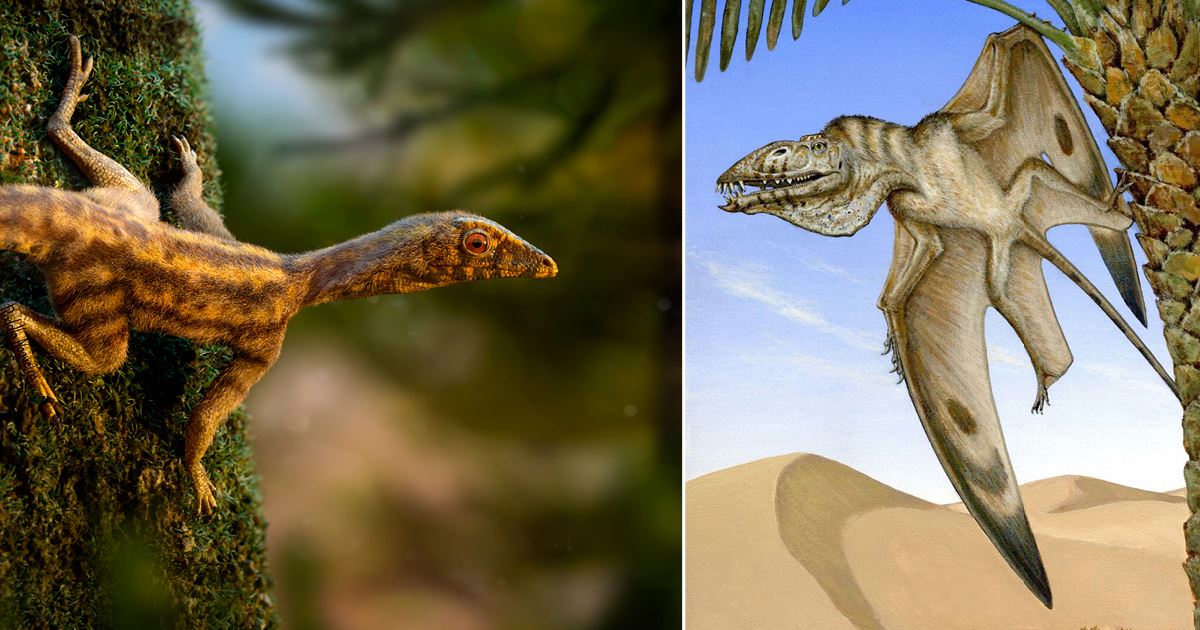 An artistic rendition of the lagerpetid Ixalerpeton polesiensis and the pterosaur Caelestiventus hanseni, both of which lived more than 210 million years ago: although considered sister groups, one could fly while the other was wingless

It has never been easy to classify pterosaurs, the first winged vertebrates to conquer the skies at a time when dinosaurs prowled on land between 230 and 66 million years ago. Controversies over classification remain more than two and a half centuries since the first pterosaur fossil was described, a species now known as Pterodactylus antiquus that lived during the late Jurassic period, about 150 million years ago. In 1784, Cosimo Alessandro Collini (1727–1806) described a strange creature whose fossil skeleton had been unearthed at least two decades earlier at a limestone quarry in Eichstätt, a town in Bavaria, Germany. Especially curious among the bone remains was the fossil’s long, sharp-toothed beak and a mysterious, elongated fourth finger. Collini, then curator of the natural history cabinet in the German city of Mannheim, thought it was a sea creature with fins, an impression suggested by his having found the material in a collection of articles of apparent marine origin.

A few years later, naturalist Jean Hermann (1738–1800) of Strasbourg, France, concluded that the animal was instead a mammal with wings formed by a membrane anchored on the large fourth finger, a mechanism bearing some resemblance, but not identical, to the wing structures that would later evolve on bats. In the 1810s, his colleague Georges Cuvier (1769–1832), at the Museum of Natural History in Paris, who had received sketches and written descriptions from Hermann, classified the intriguing creature as a flying reptile. He also gave it an unflattering description, calling it “the product of a sick imagination rather than the ordinary forces of nature.” His description is explained by the peculiar nature of pterosaurs, which became extinct along with dinosaurs and left behind no living descendants: they were unlike like any life forms that preceded them, and apparently emerged with an anatomy purpose-built for flight whose origin remains a mystery.

A recent study by an international team of paleontologists led by Max Langer, at the Ribeirão Preto campus of the University of São Paulo (USP), took an important step toward a better understanding of pterosaur origins. According to the paper—which is featured on the cover of the December 17 edition of Nature—lagerpetids, a little-known group of small ground-dwelling bipeds, which are relatively sparse in the fossil record, were precursors to pterosaurs. Until recently, the prevailing view among paleontologists was that lagerpetids were instead precursors to dinosaurs, likely emerging on the ancient southern supercontinent of Gondwana just under 240 million years ago. 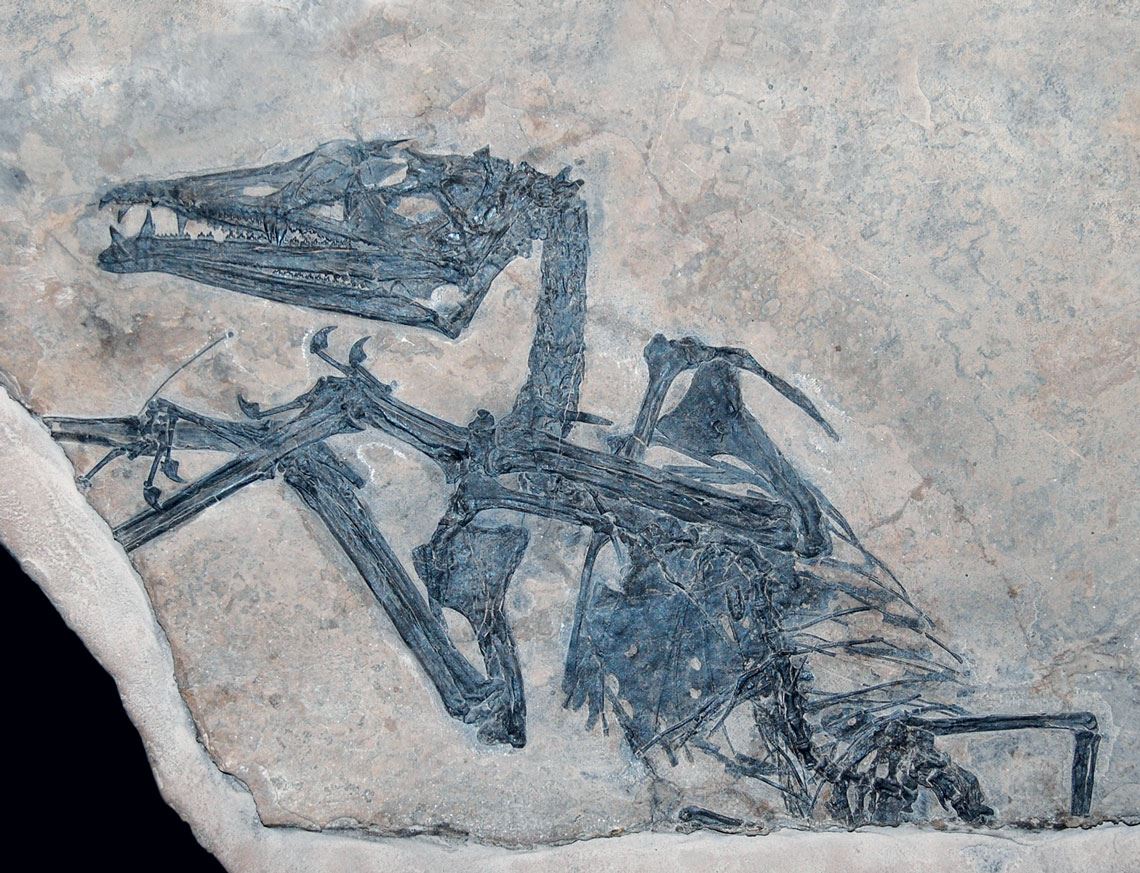 Fossil remains of the pterosaur Eudimorphodon, found in the Italian AlpsTommy / Wikimedia Commons

Lagerpetids, which largely fed on insects and perhaps smaller animals, couldn’t fly and had no structures resembling wings, but their forelimbs were elongated. “The anatomy of their claws suggests they used their forelimbs for purposes other than for moving on the ground, such as for climbing, scratching or capturing prey,” says Langer. That is why in the artistic rendition on the cover of Nature, Ixalerpeton polesiensis—the lagerpetid species discussed in Langer’s paper, found in the region of Santa Maria, in Rio Grande do Sul—is shown leaping from a tree.

The article does not suggest that pterosaurs were direct descendants of lagerpetids, whose oldest known fossil predates the oldest remains of winged reptiles found to date by 18 million years. “We’re saying they are sister groups. They bear the same evolutionary relationship that humans do to chimpanzees. One is not descended from the other. What links them together is that their lineages originated from a common ancestor,” explains Langer. All of these ancient vertebrates—dinosaurs, pterosaurs, and lagerpetids—have some degree of kinship with one another and are lineages that make up an even larger and more ancient group of reptiles—archosaurs. Today, birds (which are representatives of the dinosaur group) and crocodilians are the only living representatives of archosaurs.

To date, fossils of only six species of lagerpetids, which lived between 237 and 210 million years ago, have been discovered in four countries (Brazil, Argentina, the US, and Madagascar). These species belong to a group of extinct reptiles that have been known to science for only about 50 years. All known forms of these animals are of modest size, measuring between 10 cm and 1 meter (m) in length and weighing no more than 5 kilos. Initially, fossils were found only of the hip bones and hind legs. In the last 10 years, bone remains have been found of other parts of these reptiles, such as the braincase, spine, and forelimbs. This has provided a better understanding of the anatomy of lagerpetids and how it compares to that of early pterosaurs. 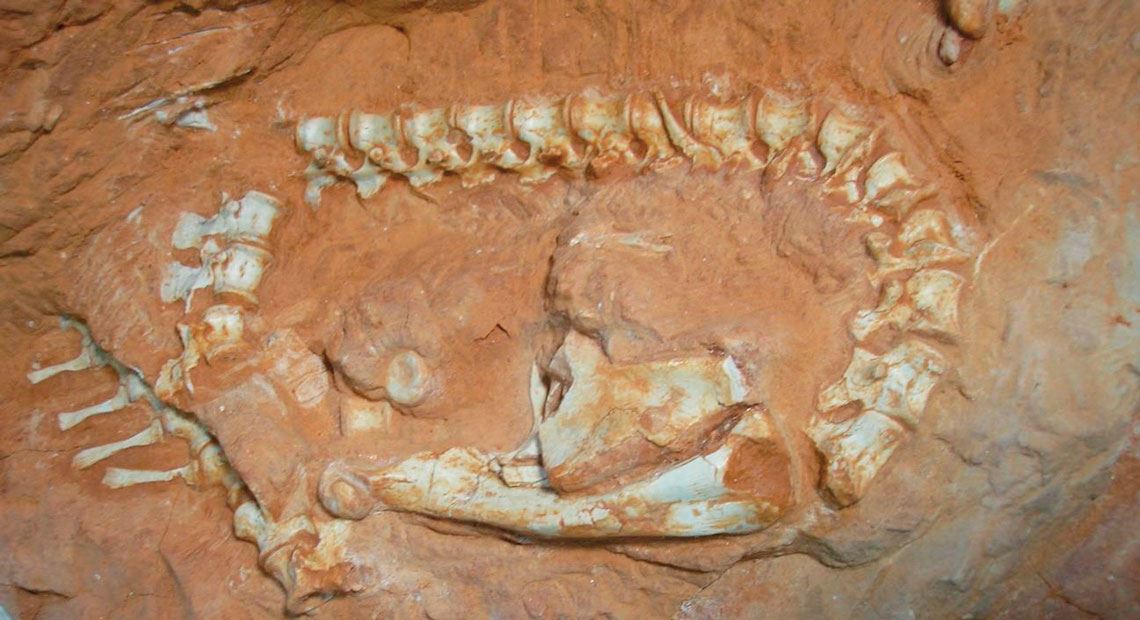 Pterosaurs have been known for two and a half centuries, as the story in the introduction to this article illustrates. About 100 species have been described to date, from specimens the size of a hen (usually the oldest) to animals the size of a four-passenger airplane. All known pterosaurs have characteristic elongated fourth fingers on their forelimbs. “No pterosaur fossils without this flight mechanism have ever been found,” says Argentine paleontologist Martín Ezcurra of the Museo Argentino de Ciencias Naturales Bernardino Rivadavia, in Buenos Aires, the lead author of the Nature article along with colleagues in the US and Europe.

This is precisely what intrigues paleontologists. In the fossil record, even the oldest species of this group of reptiles, dating back around 220 million years—such as Caelestiventus hanseni—already exhibited an anatomy fully adapted for flight. There are no known intermediate forms, or “evolutionary sketches” of what would become the pterosaur. All fossils of these enigmatic animals appear to have emerged ready for flight, which makes it difficult to establish which lineage of reptiles they evolved from.

In the article in Nature, paleontologists analyzed and reconstructed the anatomical features of these half-dozen species of lagerpetids, using techniques such as microcomputed tomography. They then constructed phylogenetic trees that placed them as the group most closely related to pterosaurs. Although they were wingless and therefore flightless, lagerpetids shared some common anatomical features—such as the jaw, teeth, braincase, and inner ear—with pterosaurs. “Our work on the origin of pterosaurs will open a new line of research that will attempt to understand how these animals became the first vertebrates to acquire the ability for active flight and not just gliding,” says Ezcurra. 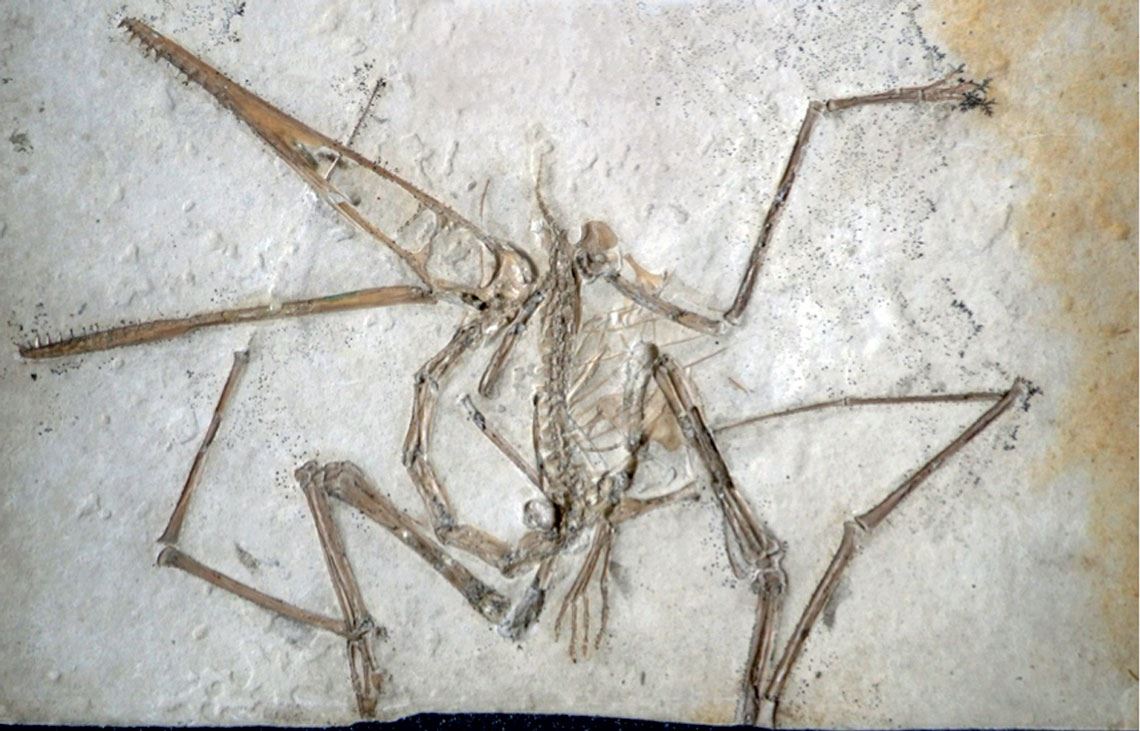 Currently, two competing hypotheses attempt to account for the evolutionary process that led to the emergence and radiation of pterosaurs. One suggests they may have arisen more than 250 million years ago, long before their fossil record commences. According to this hypothesis, known as the Iceberg model, pterosaurs had a long evolutionary history before their first appearance in the geological record, spreading gradually across the continents like slow-moving icebergs. The other hypothesis, called the Big Bang model, suggests their appearance was more explosive and occurred in a short space of time. In this model, pterosaurs appeared relatively abruptly in evolutionary history, around 220 million years ago, the age of their oldest known fossils.

“Evolutionary proximity to lagerpetids [whose oldest fossils are not more than 240 million years old] supports the Big Bang model,” says Italian paleontologist Fabio Marco Dalla Vecchia, from the Museo Friulano di Storia Naturale at Udine, who coauthored the new study. Dalla Vecchia is one of the world’s leading specialists in pterosaurs. Many of their earliest fossils were found near the border between northern Italy and southern Austria.

“Ezcurra and his colleagues shed first light on the origin of this striking group [pterosaurs],” wrote paleontologist Kevin Padian of the University of California at Berkeley in an article in Nature in which he comments on the significance of the new paper. “The results presented don’t lay out the complete evolutionary path from a small, earth-bound reptile to the first flying vertebrates. But one day a pterosaurian ancestor might emerge from Triassic rocks to fill in some of the blanks, in much the same way that the discovery of Archaeopteryx provided key clues to the early stages of bird flight.” Archaeopteryx was the first fossil of a dinosaur species with feathers, and is viewed as a transitional form between the land-dwelling lineages of this popular reptile group and birds.

For paleontologist Alexander Kellner, director of the National Museum at the Federal University of Rio de Janeiro (UFRJ), the new study makes a very important contribution to the discussion about the origin of pterosaurs. “It’s an excellent paper,” says Kellner, a recognized expert on pterosaurs. He notes, however, that the mystery is far from being solved. “Ideally we would need to find a fossil of an animal with something closer to pterosaur wings, but which was not yet a pterosaur,” says Kellner. “In other words, a quasi-pterosaur that was unable to fly or was struggling to fly.” This clearly intermediate form between land-dwelling and winged reptiles is the Holy Grail of every paleontologist. Lagerpetids lacked the anatomic capability for flight or even for gliding. But for now, according to the Nature article, they stand as the closest-known relatives to pterosaurs.