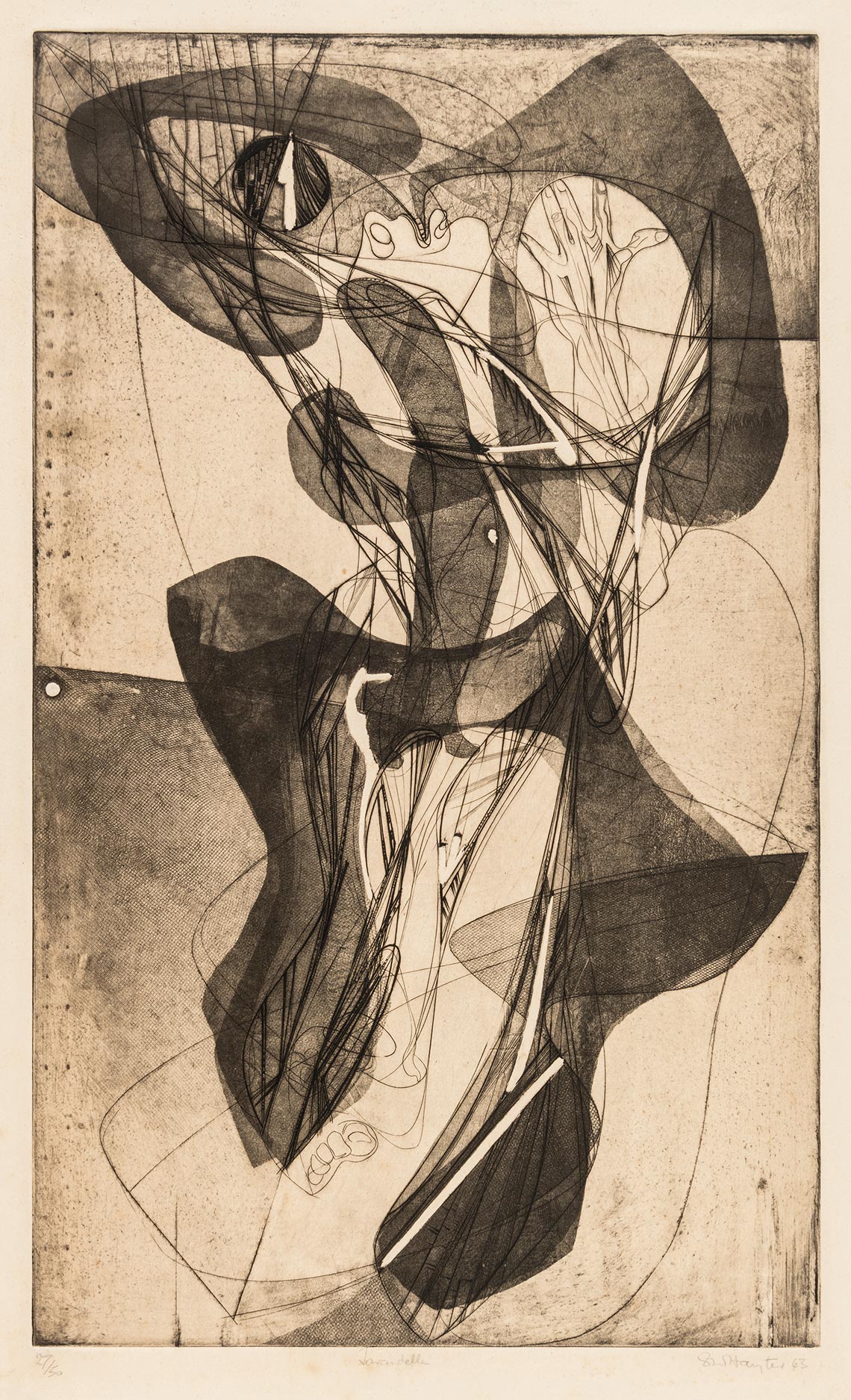 A study developed as part of the activities of a project about museum archives recently identified a collection of 28 North American etchings that were stored for more than six decades in the technical reserve of the Museum of Contemporary Art at the University of São Paulo (MAC-USP). Donated to Brazil in 1951 by American businessman and politician Nelson Rockefeller (1909–1979), the discovered collection shows that etchings served as an initial platform for the circulation of United States artistic production in Brazil. Some of the works are on display in Atelier 17 e a gravura moderna nas Américas (Atelier 17 and the modern etching in the Americas), organized by MAC-USP, in partnership with the Terra Foundation for American Art. Open to the public until July 2, the exhibition also brings together etchings from institutions such as the Brooklyn Museum and the Art Institute of Chicago.

“Until the 1950s, the Brazilian art scene was focused on European production. The discovery of this set of etchings confirms a time when American art began to circulate in Brazil with greater intensity,” says Ana Gonçalves Magalhães, vice director of MAC, remembering that the archives of the Museum of Modern Art (MAM) and of the São Paulo Museum of Art (MASP) were primarily built with works by European artists. Magalhães coordinates the research project that identified the works.

Produced between 1910 and 1960, the collection of etchings had been on display only once in Brazil after the donation by Rockefeller, during the show Gravadores norte-americanos (North American Etchers), organized by the MAM only a few months before the first Biennial of São Paulo in 1951. After this event, the collection remained in storage in the MAC-USP technical reserve. “The historiography knew that some of the etchings existed, but not that they were part of a collection that was planned for donation to Brazil as part of America’s efforts to broaden the circulation of the country’s works of art in Brazil,” explains Luiz Claudio Mubarac, professor of visual arts at the School of Communication and Art (ECA) at USP, which is not participating in the project. 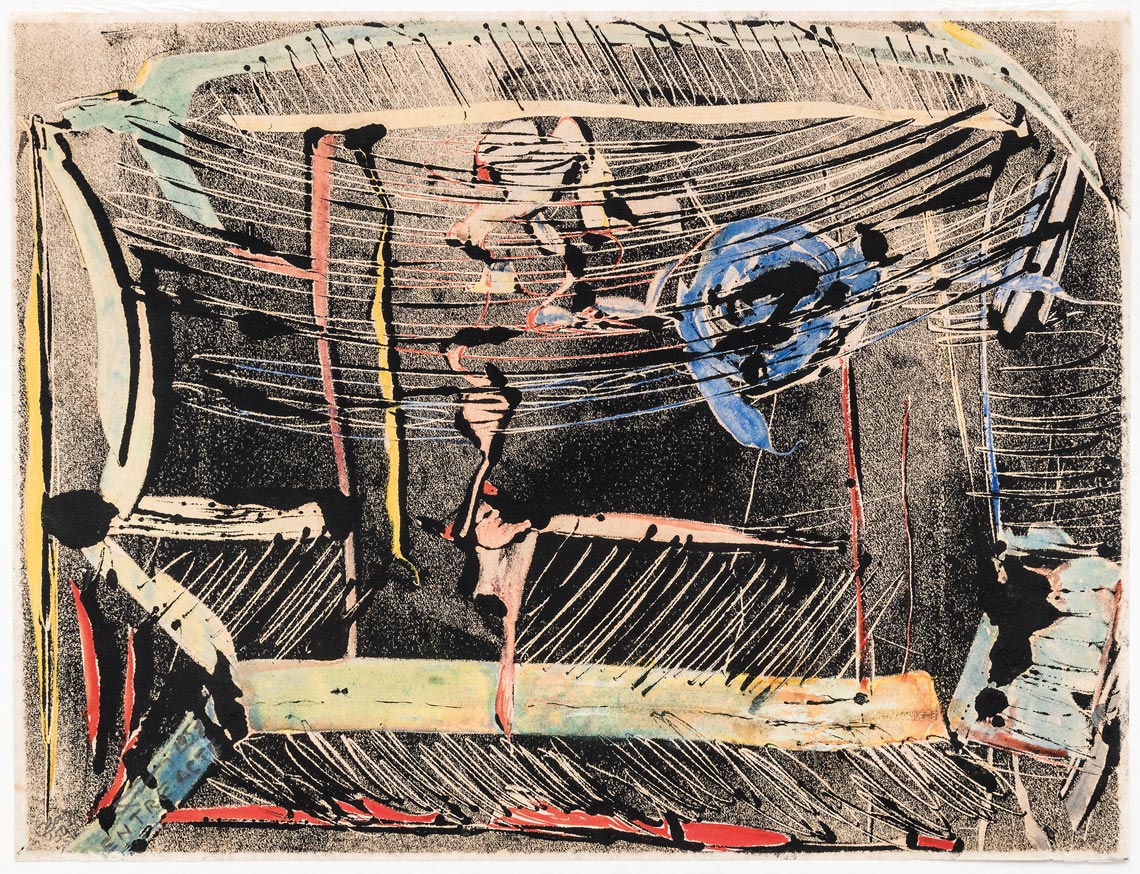 The donation was made through the curatorial team of the Museum of Modern Art in New York (MoMA) and brings together works done using techniques and esthetic parameters for etchings produced in the United States at the end of the 1940s. The majority are by artists linked with Atelier 17, by the Englishman Stanley William Hayter (1901–1988). Hayter founded Atelier 17 in 1927 in Paris, but in 1940, after the invasion of France by the Nazis, it moved to New York. “The studio was a space of experimentation of new procedures and methods and brought together immigrant artists and women,” informs journalist Carolina Rossetti de Toledo, author of the master’s research project that identified the collection and one of the curators of the exposition, along with Magalhães.

Toledo, who is also doing her doctorate in the Inter-unit Program of Esthetics and Art History at USP, says that the collection was sent with the intention of contributing to the development of a collection at the first museum of modern art in Brazil. As part of this effort, Rockefeller had already donated in 1946 a set of 14 works. “The works of art were sent as a strategy to bring American culture, politics, and economics closer to Brazil in the postwar period. The donations by Rockefeller sought to increase the influence of the United States in Latin America,” she says. The two collections were moved to MAC-USP in 1963, the year the museum was founded and which today has close to 12,000 works.

The curator recalls that, after WWII, the United States economy went through a period of growth, attracting intellectuals and artists from Europe to the country. “Graphic art is a low-cost, fast-production medium that is focused on mass reproduction, which facilitated at that time an increased capacity to promote modern art,” confirms Toledo. She states that, in 1945, it was possible to buy one of Hayter’s award-winning etchings, such as Tarantelle, for US$45. Toledo undertook her research in Brazilian museums and newspaper archives, as well as at the Rockefeller Archive Center in New York.

Brazilian etching artists
Before 1808, when the royal family settled in Brazil, printing work was prohibited in the country. Thus, the development of the first printers only began in the second half of the nineteenth century. “The national scene is very different in Europe, where the tradition of printing dates back to the fifteenth century,” compares Mubarac of ECA-USP. He believes that, because of these characteristics, the work of Brazilian etching artist pioneers, such as Carlos Oswald (1882–1971), Lívio Abramo (1903–1992) and Oswaldo Goeldi (1895–1961), is also marked by an experimental nature.

Magalhães, of MAC-USP, says that some Brazilian artists had contact with Atelier 17 through scholarships and trips, and others through Hayter’s books and the biennials in São Paulo, in exhibitions of etching artists connected to American artist groups. “In 1951, after Hayter returned to Paris from the United States, Lívio Abramo and Geraldo de Barros [1923–1998], for example, went to France and had access to the printing equipment and knowledge of the techniques that were used in the studio,” he says.

Historical review
As with the collection of etchings, research carried out as part of the project coordinated by Magalhães has revealed previously unknown aspects of Brazilian artistic historiography. Another member of the project team, Paulo César Garcez Marins, professor at the Paulista Museum, studies the formation of Brazilian imagery through the figure of the bandeirante. He believes that there are no images of these trailblazers from the colonial period, so the characteristics that are today associated with this figure were determined through commissions by the Paulista Museum in the first decades of the twentieth century. “The majority being of mixed ancestry, the image of the bandeirante as a white, middle-aged man, with a long beard, high boots, and a vest spread throughout Brazil on stamps, coins, and in educational books, all of which reproduced the works of art of the museum archives,” he recounts. According to Marins, the most iconic image of that which would come to be known as the typical garment of the bandeirantes—the gibbon sewn with diamond shapes—originated from the painting commissioned by the museum in 1920, done by Oscar Pereira da Silva (1867–1939), which was based on a work done in 1843 by the Frenchman Jean-Baptiste Debret (1768–1848). “The painting Combate de milicianos de Mogi das Cruzes com botocudos [Battle of the militia of Mogi das Cruzes and the Botocudos] became an iconographic benchmark and defined the image of the clothing of the bandeirante,” he confirms.

Ana Magalhães, in turn, developed a study to identify how the work Formas únicas da continuidade no espaço (Unique forms of continuity in space), of the Italian futurist Umberto Boccioni (1882–1916), arrived in Brazil. The original, which was done in plaster and today belongs to the archives at MAC-USP, is one of 11 pieces that the artist displayed in a futurist sculpture exposition in Paris in 1913. “After his death, only three of the plaster sculptures he had presented in this exposition remained. We needed to know if the piece at MAC-USP was one of them,” said the researcher. Through interdisciplinary studies that involved X-ray analyses and material-reading techniques, it was identified that the plaster sculpture of the MAC-USP archive is, in fact, that which was exhibited by the artist at that time.

When Boccioni died, the sculpture was sold to a Milanese aristocrat and later to the futurist poet Filippo Tommaso Marinetti (1976–1944). Francisco Matarazzo Sobrinho (1898–1977) bought it in 1952 and donated it to the MAC-USP archive in 1963. “Art historians tend to treat events, such as the acquisition of Boccioni’s work of art or the donation of the etchings by Rockefeller, as subject matter that is apart from Brazilian artistic historiography, but the return visits to the archive confirmed that they should be included as part of this history,” concludes Magalhães.