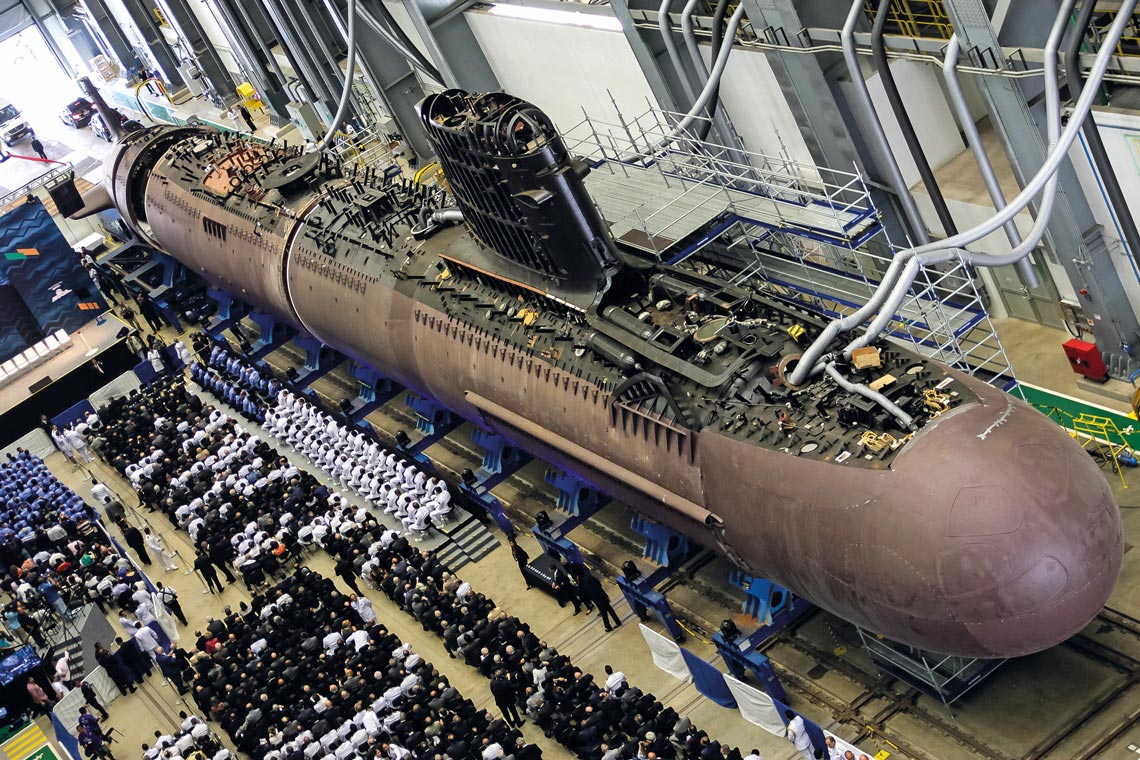 After six years of construction, the Riachuelo is scheduled to be launched in December in Itaguaí, in the metropolitan region of Rio de Janeiro. It’s the first of five submarines—four conventional and one nuclear-powered—that are being manufactured in the country as part of the Brazilian Navy’s Submarine Development Program (PROSUB). In addition to patrolling and defending the so-called Blue Amazon, a maritime area of 4.5 million square kilometers rich in biodiversity and resources such as pre-salt oil reserves, the submarines are giving an important boost to the technological development of the Brazilian naval industry.

The amount being invested in PROSUB is an estimated R$31.85 billion. The program includes the construction of an industrial complex in Itaguaí with two shipyards (one for construction and one for maintenance), a naval base, and the Manufacturing Unit for Metallic Structures. After the Riachuelo, the schedule calls for completions of the conventional submarines Humaitá in 2020, Tonelero in 2021, and Angostura in 2022. The launch of the nuclear submarine, the SN-BR Álvaro Alberto, is scheduled for 2029. With its completion, Brazil intends to join the small group of six countries that possess nuclear submarine technology, made up of China, the United States, France, the United Kingdom, Russia, and India.

As they come online the new S-BR Riachuelo-class conventional submarines will replace the current fleet of five Tupi-class vessels, says Admiral Bento Costa Lima Leite de Albuquerque Junior, the Navy’s Director-General of Nuclear and Technological Development. (He was appointed the Minister of Mines and Energy a few weeks after being interviewed for this story.) The Tupi submarines were manufactured in the 1980s and 1990s. One was built in Germany and the others in Brazil, in an endeavor carried out by Nuclebrás Heavy Equipment (NUCLEP), in partnership with the Naval Arsenal of Rio de Janeiro. 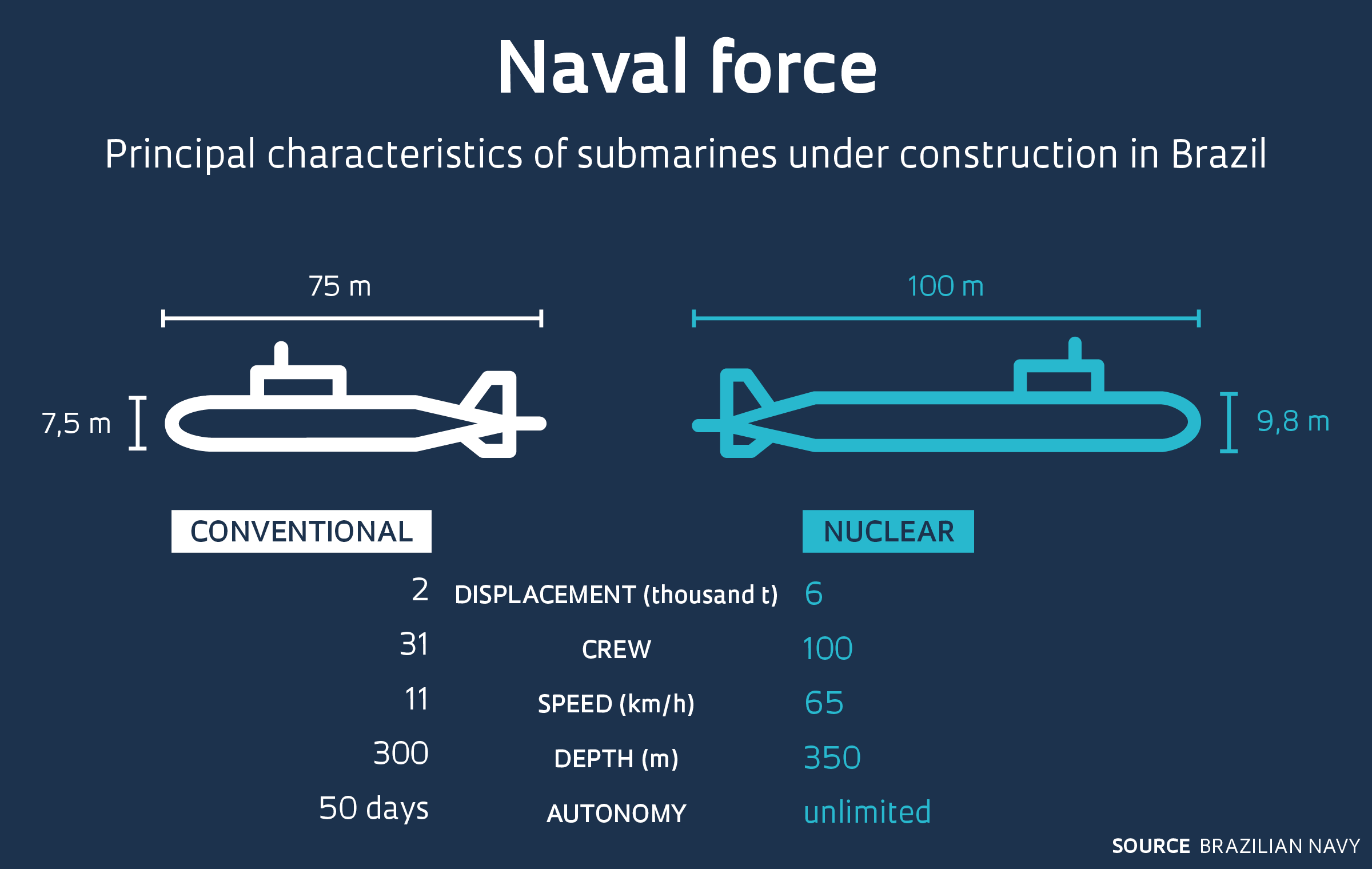 Modernizing the conventional fleet guarantees increased capabilities of monitoring and defense of Brazilian waters, since the new Riachuelo-class submarines have greater autonomy than the Tupi-class subs, and can stay on mission for 70 days, as opposed to the 45-day limit of the current vessels. The nuclear sub, however, will raise that capacity to a new level. A conventional submarine is driven by an electric motor fueled with diesel fuel. Since the combustion of diesel fuel depends on oxygen, the vessel needs to emerge on average twice a day to capture oxygen from the air, or at least extend a snorkel tube to the surface. It also needs to refuel regularly with diesel. At such times, the vessel is exposed and becomes an easier target for attack during situations of conflict.

Nuclear-powered submarines are less vulnerable. Their source of energy is a nuclear reactor, which generates heat to vaporize water, enabling the use of this steam for turbines. Depending on the design of each submarine, the turbines can drive electric generators or the propeller shaft itself. In both cases, they produce all the energy necessary for life on board. “Because they have a virtually inexhaustible source of energy, they can theoretically be submerged for an unlimited amount of time,” Admiral Albuquerque explains. This means that submarine autonomy—understood as time away from port—is limited only by the physical and psychological resistance of the crews, and food and water supplies. The United States Navy has defined this time as six months. 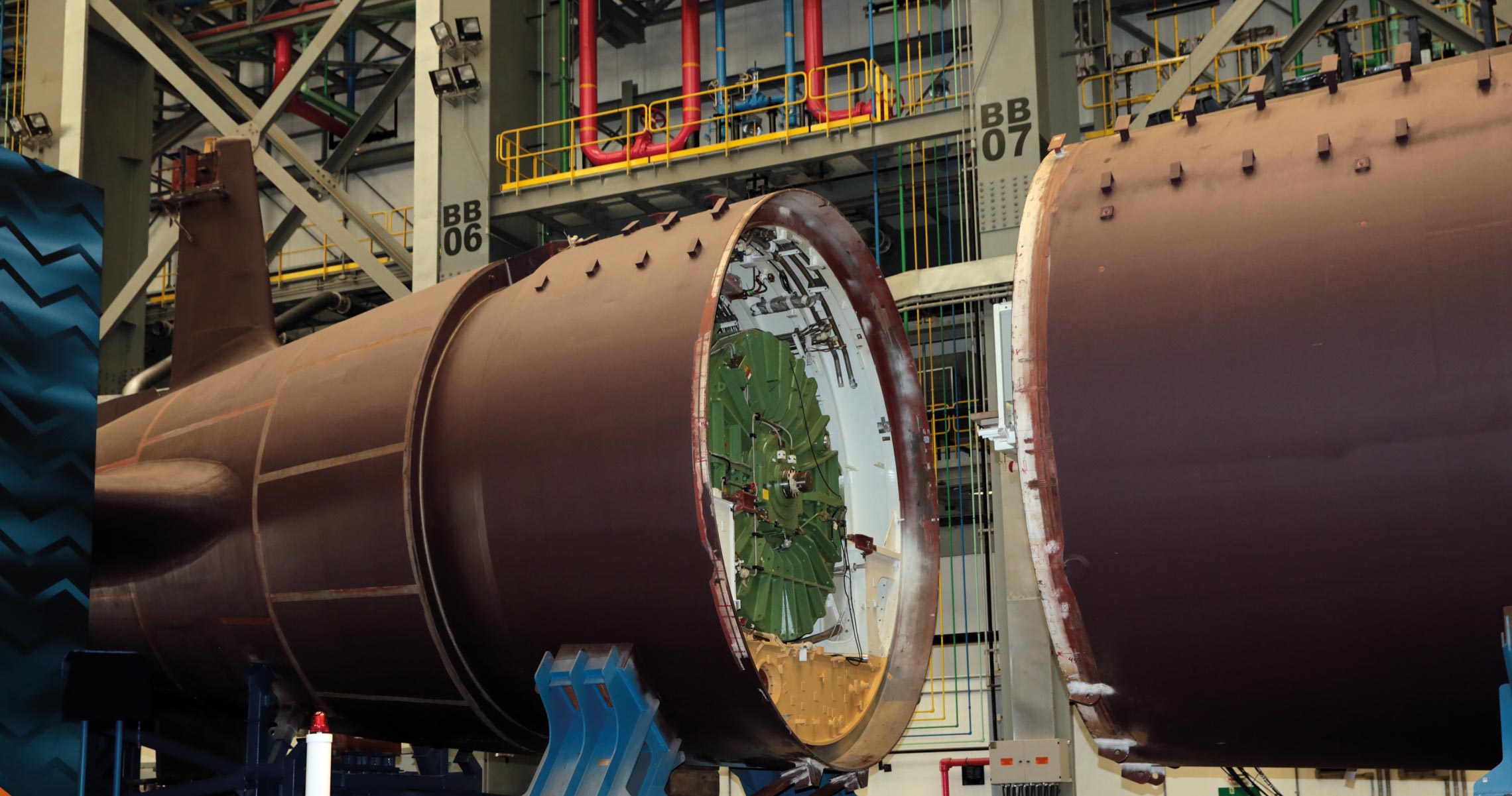 Assembly of two sections of the Riachuelo, at the Itaguaí naval base (RJ)Brazilian Navy

Technology transfer
PROSUB is the result of a cooperation agreement signed in 2008 between the governments of Brazil and France, with the participation of public and private companies under the coordination of the Brazilian Navy. The partnership stipulates that the French not only advise Brazilians on the construction of the submarines, but also help to design them. France contributes non-nuclear technology to the projects and construction, with Naval Group, the company known until 2017 as Direction des Constructions Navales et Services (DCNS), being responsible for transferring the French expertise.

The Brazilian company involved in the project is the construction company Norberto Odebrecht (CNO), which has set up a special purpose entity (SPE) with DCNS, called Itaguaí Construções Navais (ICN), in which the Brazilian Navy holds a “golden share.” ICN is responsible for the construction of the shipyards, the naval base, and the submarines. The Manufacturing Unit for Metallic Structures is one of its operational arms. According to Admiral Albuquerque, technological challenges on the project are being overcome with technology transfer in a number of areas, including industrial infrastructure, construction of the submarines, and the control and combat systems. The nuclear propulsion system is not part of the agreement. The process of technology transfer involves the French supplying the information and technical data on the submarines, as well as training courses, including specific training carried out in France, and technical support.

One technology considered critical to the project’s success by the Navy is the submarines’ combat system, responsible for the control and management of the six torpedo tubes that equip the Riachuelo. This task became the responsibility of the Ezute Foundation, a private nonprofit institution created in 1997, which is accredited as a strategic defense company (EED) by the Ministry of Defense.

The process of nationalizing this system began in 2011, when nine professionals from the foundation were sent to France for training in systems engineering and integration, and developing the Combat Management System (CMS) software. “Our engineers were responsible for creating the modules that allow the submarines to communicate with the tactical data link used by the Navy on its ships,” says Andrea Hemerly, director for the defense market at the Ezute Foundation.

Naval engineer Luis De Mattos, president of the Brazilian Society of Naval Engineering (SOBENA), says that Brazil has well-prepared technical personnel and an extensive industrial structure, which facilitates the absorption of technology. “What was missing was the opportunity. And that’s what PROSUB is creating,” he says. For Mattos, it was important for the Navy to establish clear objectives in the nationalization of the technology, which starts with a value of 20% Brazilian-made content in the Riachuelo and grows progressively with each new vessel. “PROSUB will allow Brazil to enter a select group of countries that are qualified to build their own submarines. In the future we’ll even be able to participate in international construction tenders,” he says. 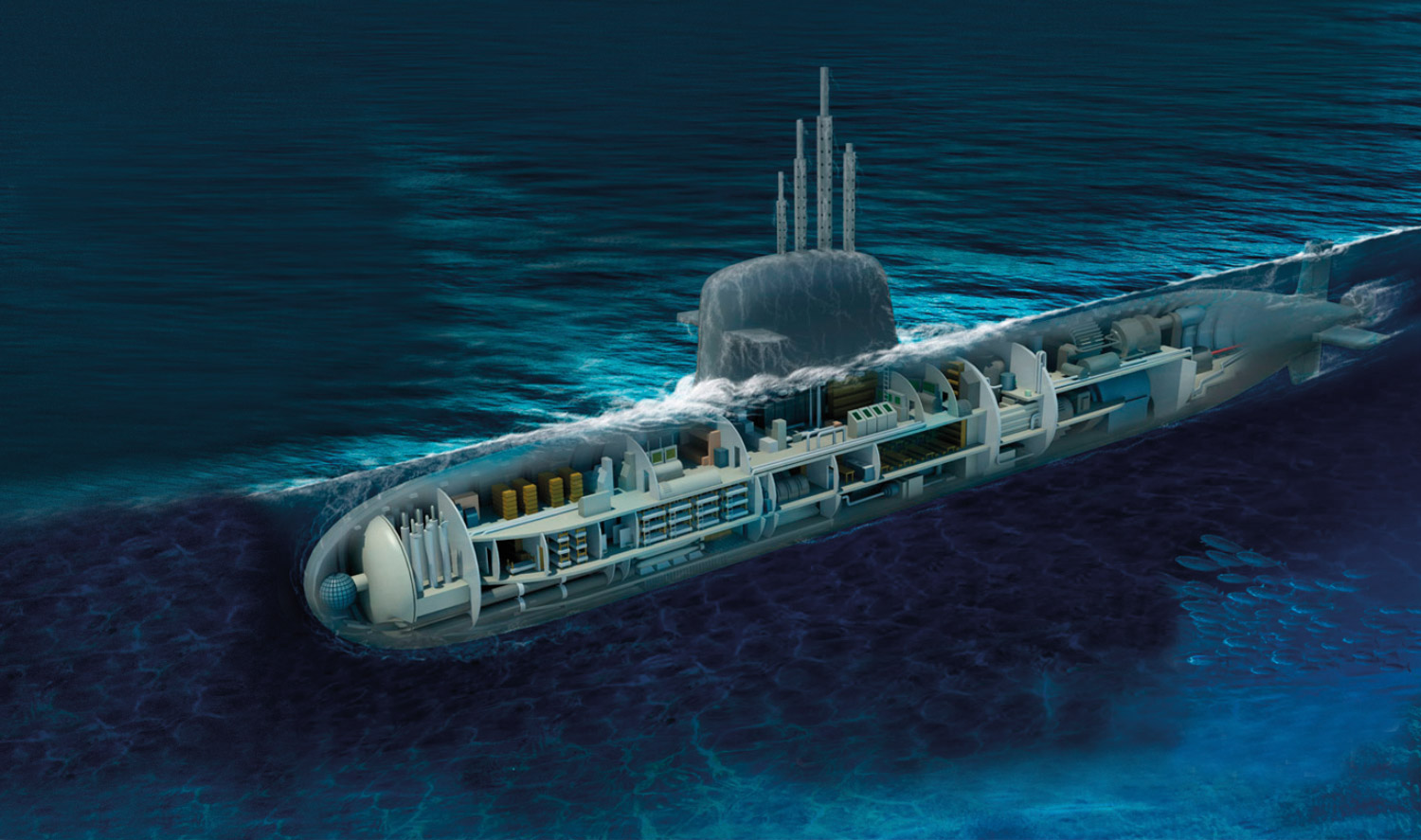 The construction of nuclear-powered submarines is a goal that’s been pursued by the government since 1979, when the Brazilian Navy Nuclear Program (PNMB) was created. Its purpose was to acquire the technical capacity to design, construct, operate, and maintain naval propulsion systems using nuclear reactors, as well as obtain the nuclear fuel production cycle. The development of the SN-BR Álvaro Alberto submarine’s nuclear propulsion system is the exclusive responsibility of the Navy, which has already begun to deploy the Nuclear-Electric Energy Generation Laboratory (LABGENE) in Iperó, São Paulo. “LABGENE will enable the simulation of the reactor’s operation and its integrated electromechanical systems,” says Admiral Bento Costa Lima Leite de Albuquerque Junior, the Navy’s Director-General of Nuclear and Technological Development.

With them, the country advanced in its development of new materials, electronic sensors, and new valves for operating with uranium hexafluoride (UF6, a compound used in uranium enrichment), which gave a boost to research centers in industry and universities.

Despite the advances, construction of the nuclear submarine encountered difficulties and the schedule had to be revised. In 2008, when Brazil and France signed the partnership that would give rise to the Submarine Development Program, the plan was that a nuclear sub would be ready by 2021. The deadline now is 2029, a half a century after the start of the project.