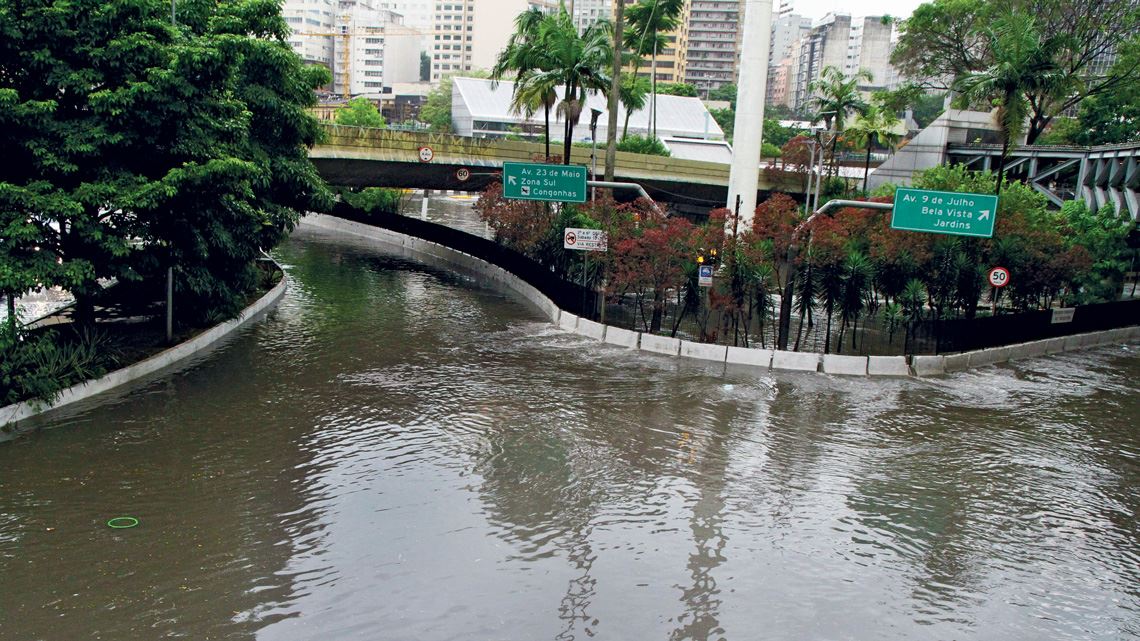 The gradual rise in global warming over the course of this century could progressively intensify the incidence of extreme rainfall and increase the risk of landslides and flash floods in the South, Southeast, and Northeast of Brazil, where the largest cities are located, home to more than two thirds of the country’s population. If the planet’s average temperature rises to 4 degrees Celsius (°C) above the levels recorded after the Industrial Revolution at the end of the nineteenth century, the probability of flooding in the São Paulo Metropolitan Area, for example—which is already considerable—will increase by almost 15%. The increase to the risk of landslides in Brazil’s largest megalopolis is slightly lower, but still significant, at around 10%. These are some of the conclusions of a climate modeling study published in the journal Frontiers in Climate on March 3 by researchers from the National Center for Natural Disaster Monitoring (CEMADEN), located in the interior of São Paulo State, and from the Met Office Hadley Centre for Climate Science and Services in the UK.

The 10% to 15% increase in the disaster risk predicted for Greater São Paulo may seem small, but its relationship with the impacts of such disasters is not linear. “We saw greater potential for more frequent floods and landslides, especially in regions where the risk is already high,” says climatologist José Antonio Marengo, one of the authors of the article and head of research and development at CEMADEN. “If the global temperature rises by 1.5 or 2 ºC, it will be very costly to adapt. If the increase is 4 ºC, the adaptation process itself is almost impossible.” Marengo studies the impacts of climate change in Brazil with funding from FAPESP and the Brazilian National Council for Scientific and Technological Development (CNPq).

In the western region of the North and in certain areas of the Midwest, landslides and floods are also becoming more frequent due to the higher number of storms caused by global warming this century, according to the study. But because these areas are not densely populated, landslides and floods rarely affect the lives of local residents and tend not to cause much damage to properties or human lives.

The vulnerability of the São Paulo Metropolitan Area is not an extreme or isolated case. In almost all areas surrounding the country’s state capitals, the likelihood of landslides and floods is increased, according to the simulations. In Curitiba, if the temperature rises by 4 ºC, the risk of landslides increases by about 10%. In Porto Alegre and Vale do Itajaí, Santa Catarina, two areas that currently have the highest risk of landslides in the country, the rise in the planet’s temperature increases the risk of this type of disaster by between 2% and 7%. The situation is similar when it comes to flooding. Florianópolis, like São Paulo, is another capital city where the study indicates an increased flash flood risk of more than 10% due to global warming.

Of the major state capitals, Recife seems to be an exception, where the simulations did not suggest any increased risk of floods or landslides. In the capital of Pernambuco and other areas of the Northeast, it is not only that the region naturally experiences fewer disasters related to extreme rainfall. There is also a lack of consensus among climate models on how global warming will affect rainfall and consequently impact the likelihood of floods and landslides in the region. “Our degree of confidence when making predictions for the Northeast is lower than in the South and Southeast,” says researcher Pedro Camarinha, a specialist in climate change and disasters at CEMADEN, and another author of the study. “For these two regions, five of the six climate models that we used in the study showed similar results.”

The projections described in the article are based on a slightly different approach to similar studies. Rather than worrying about determining in which decade the average global temperature will reach a certain level due to the greenhouse effect, the researchers focused their study on another question: what impact will it have on the risk of floods and landslides, regardless of the year, if the average global temperature increases by 1.5 °C, 2 °C, or 4 °C over the average of 13.7 °C measured in 1880?

To answer this question, teams from CEMADEN and the Hadley Centre used current occupation and demography parameters from across Brazil and calculated the current flood and landslide risks nationwide. Then, without altering the size of the Brazilian population or its geographic distribution, the researchers inserted the three global warming scenarios into six global climate models developed by various institutions, including the Hadley Centre. At the end of the process, each model supplied new indices on the risk of floods and major landslides in different regions of the country for each of the three proposed temperature increases.

Due to the accumulation of greenhouse gases, such as carbon dioxide and methane, the planet has become 1.1 °C warmer on average since the Industrial Revolution. Most recent predictions made by studies that will support the next report of the Intergovernmental Panel on Climate Change (IPCC), which is due to be published in the second half of 2021, highlight that the 1.5 °C milestone is likely to be reached within the next two decades. “Even if we now reduced all greenhouse gas emissions to zero, we would probably exceed this limit in the coming years,” says Marengo. “We need to adapt our cities to this new reality.”