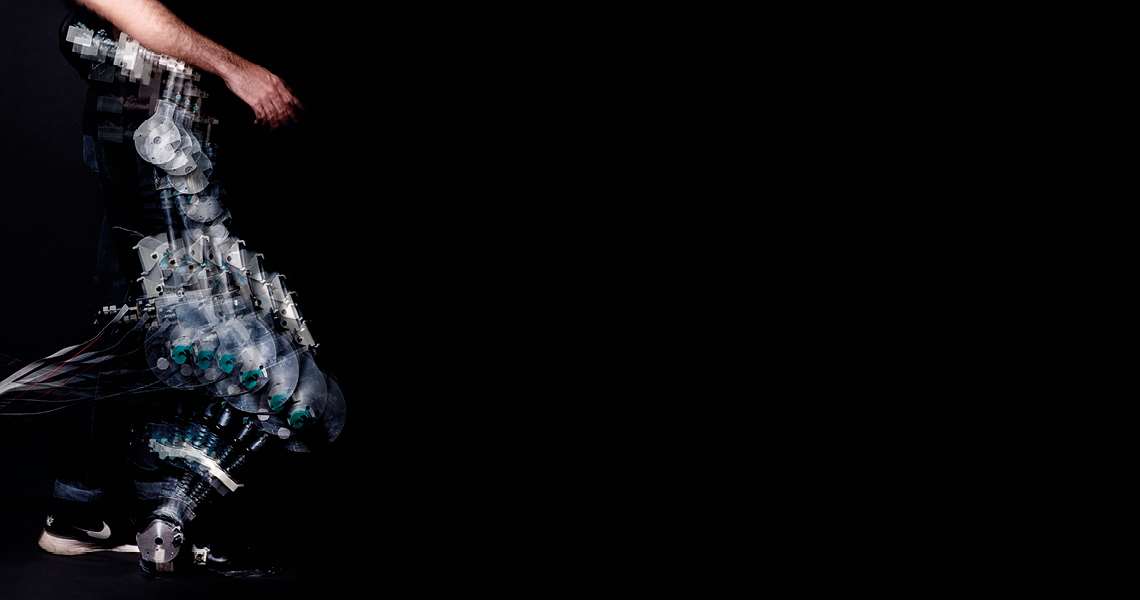 Projects being developed at university research centers and a startup in São Paulo could help to meet a latent demand in Brazil for robotic mobility systems to help people with motor disabilities. Last November, researchers at the University of São Paulo at São Carlos School of Engineering (EESC-USP) unveiled a prototype robotic exoskeleton designed to assist people who have suffered a stroke or spinal cord injury, or who have Parkinson’s disease, in moving their lower limbs. The device uses algorithms to identify specific weaknesses in each joint—such as the ankle, knee, or hip—and automatically provide the needed boost to complete the movement.

“The system is designed for gait rehabilitation. It doesn’t do all the effort for the patient, which would prevent improvement. The idea is that it should encourage patients to perform activities by providing just enough support to complete tasks such as walking, climbing steps or sitting down,” explains Adriano Almeida Gonçalves Siqueira, a professor in the Department of Mechanical Engineering at EESC who is leading the project.

The system developed at USP, which received FAPESP funding to develop the control system algorithms, is a wearable exoskeleton consisting of a pelvic strap, leg joints, sensors, small motors for movement, Velcro straps, and a pair of boots. The assembly weighs 11 kilos (kg) and so far has been tested on healthy individuals, with the exoskeleton frame showing good stability and safety performance, and the patient assistance algorithms functioning satisfactorily. “Experiments with people with disabilities will follow this year, pandemic permitting,” says Siqueira. If everything goes as planned, he continues, the next step will be to go from prototype to commercial product. “We’re seeking out companies that would be interested in producing and marketing the system.”

Experts estimate that as many as 48,000 powered human exoskeleton units will have been sold by the end of this year. The largest demand will be from the healthcare industry

The exoskeletons most commonly used at rehabilitation centers are mostly large, fixed units with a treadmill, patient support bars and frames, motors, sensors, and computer equipment, typically weighing more than 200 kg. Lokomat, from Swiss company Hocoma, is one of the most popular models globally. The system is currently used at the Physical Therapy and Rehabilitation Institute at the USP School of Medicine’s (FM-USP) Hospital das Clínicas, a member of the Lucy Montoro Rehabilitation Network; at the Association for Children with Disabilities (AACD) in São Paulo; and at the Dr. Henrique Santillo State Center for Rehabilitation and Re-Adaptation (CRER) in Goiânia, a facility run by the State Health Department of Goiás.

“The devices currently available in the market, most of which are made in Europe, the US or Japan, are unaffordable in developing countries. Lower-limb rehabilitation devices cost approximately US$ 380,000, and upper-limb devices between US$130,000 and US$160,000,” says physical therapist Linamara Rizzo Battistella, director at the FM-USP Physical Therapy and Rehabilitation Institute. “Few rehabilitation centers in Brazil are equipped with exoskeletons.”

There is a fast-growing market for exoskeleton systems such as the one developed at USP. Around 6,000 powered human exoskeletons units had been sold globally as of 2017, and the International Federation of Robotics (IFR) forecasts that 48,000 units will have been sold by the end of this year. In its Exoskeleton market research report, US business consulting services firm Prescient & Strategic Intelligence (P&S) estimates the global market will grow from US$290 million in 2019 to US$7 billion in 2030. The figures reported by the IFR include exoskeletons for healthcare as well as systems for military applications, designed to support otherwise healthy individuals in performing tasks requiring strenuous physical exertion. 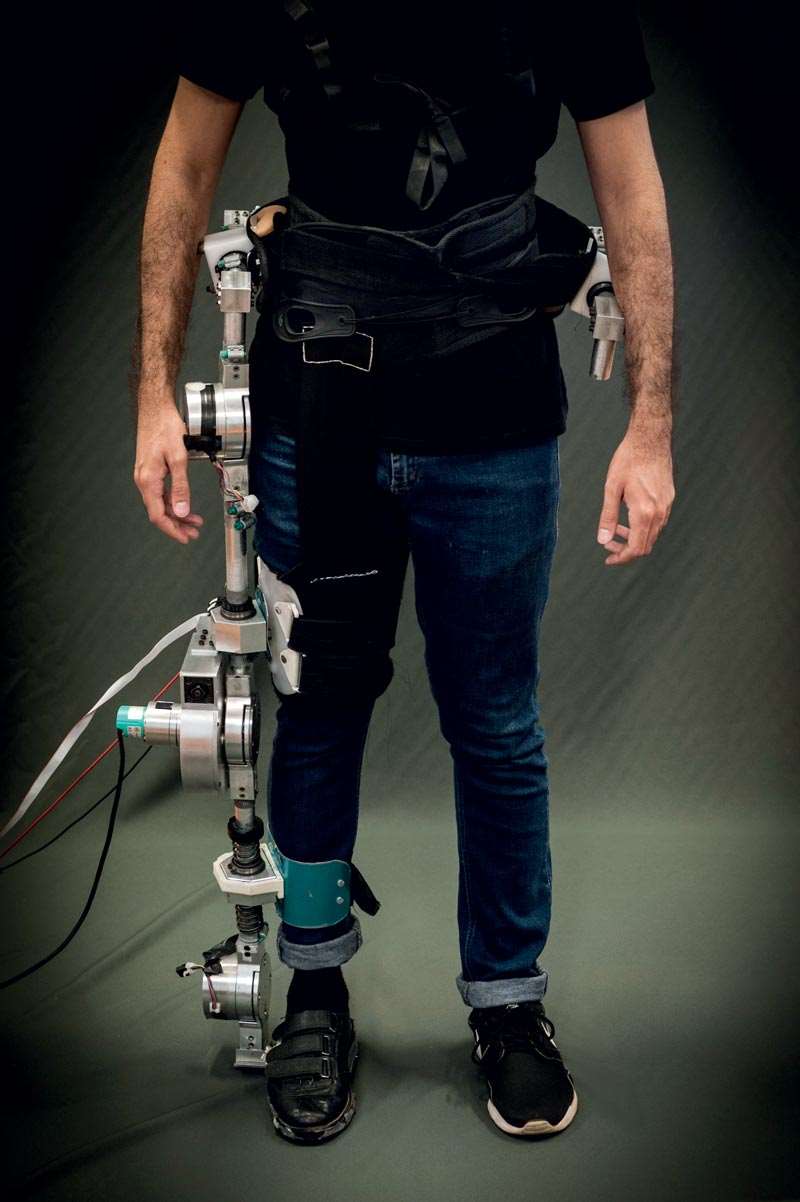 Prajneesh Dwivedi, marketing manager at P&S Intelligence, notes that the largest demand for exoskeletons will be from the healthcare industry, reflecting a number of contributing factors. These include increased healthcare expenditure by individuals and governments; a growing elderly population; and growth of job opportunities for disabled people.

Another contributing factor is the high number of spinal cord injuries (SCIs) and stroke cases. “The estimated number of people with SCIs living in the United States is approximately 291,000 persons, and 17,700 new cases are reported each year,” says Dwivedi, citing data from the National Spinal Cord Injury Statistical Center. In Brazil, between 6,000 and 8,000 new SCI cases are reported per year, and the National Healthcare System (SUS) provides around 197,000 stroke-related episodes of care annually.

Technologically advanced features—such as artificial intelligence, robotics, cloud connectivity, and lightweight designs using materials that are better adapted to the human body—are increasingly being integrated into exoskeleton devices, reports Dwivedi. A case in point is the Hybrid Assistive Limb (HAL), a lower limb developed by the University of Tsukubaand and Cyberdyne in Japan. In 2020 HAL became the first wearable exoskeleton to receive approval for medical use from the Thai health surveillance agency. Apart from Thailand, the product is now available in Malaysia, Saudi Arabia, and several countries in Europe.

The team at EESC-USP is now working with researchers at the Federal University of Rio Grande do Norte (UFRN), the Federal University of Espírito Santo (UFES), and the University of Brasília (UnB) to develop another exoskeleton for people with paraplegia, i.e. paralysis of the legs and lower trunk, an often-permanent condition typically caused by a spinal cord injury. The project is being funded by the Federal Government’s Program to Support Brazilian Graduate Education and Research and Development in Assistive Technology (PGPTA). 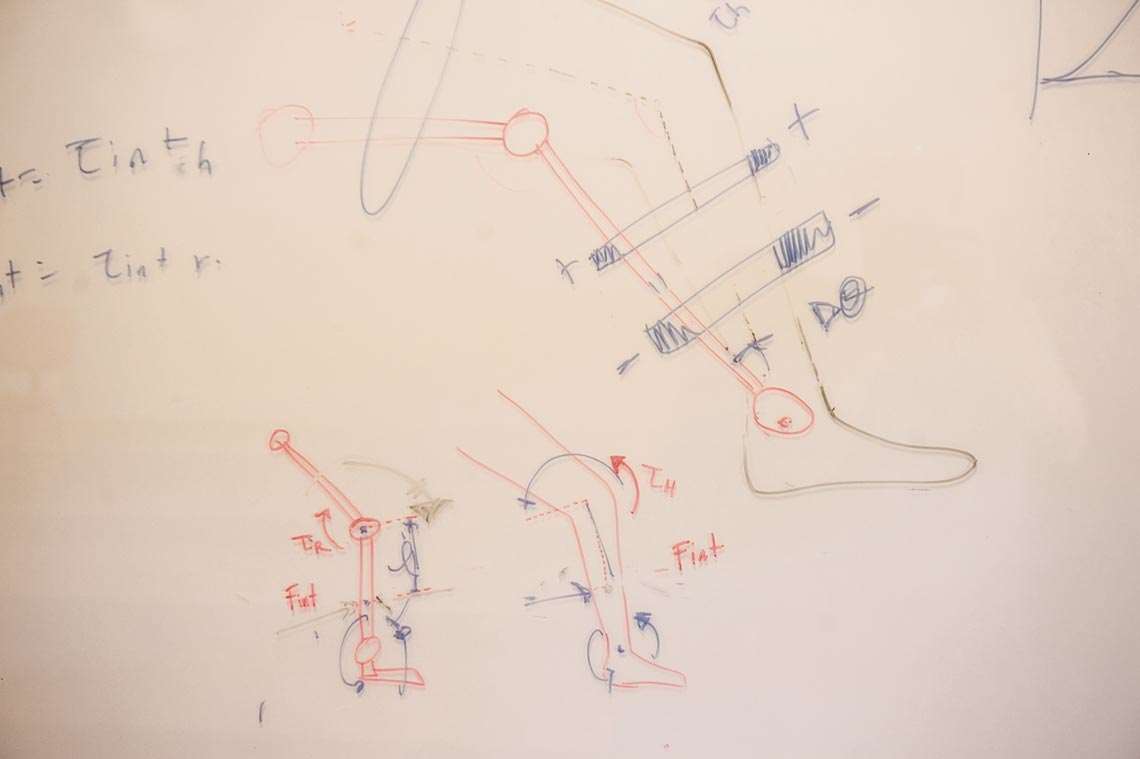 Léo Ramos ChavesThe system, called Ortholeg, is designed to help people with disabilities to be able to walk and perform day-to-day tasks. “An exoskeleton can replace a wheelchair to allow people to negotiate obstacles like potholes and curbs,” explains electrical engineer Pablo Javier Alsina, who heads the Robotics and Dedicated Systems Laboratory at UFRN and is leading the exoskeleton project. Another benefit from the Ortholeg system, says the researcher, is that it improves self-esteem. “When sitting in a wheelchair, people have to look up to others when in conversation. But when standing, they can speak on equal terms.”

Ortholeg is now in its second version. The first version weighed 20 kg, while the new one weighs just 12 kg. The frame is made of a special aluminum alloy and carbon fiber, and the device features an energy efficiency system that reduces the required battery capacity by 30%. This allowed the designers to replace four high-horsepower motors costing R$50,000 each with lighter-weight motors with a unit cost of just R$11,000.

The first exoskeleton models launched on the international market required users to control each movement using buttons. The Ortholeg incorporates advanced robotics technology that allows users to plan movements ahead. Besides setting the direction they want to move in, they have full control of pace, stops, and changes in direction. The exoskeleton then automatically executes each movement. The system uses a camera to sense obstacles, and artificial intelligence to optimize and plan movements, adapting the user’s gait to optimally negotiate obstacles and reach the target. “Our exoskeleton is like a taxicab that takes you where you want to go,” says Alsina.

Linamara Battistell, from FM-USP, says robotics can provide valuable support in motor rehabilitation by enabling patients to complete a larger number of repetitions

User testing of the system was initially planned for 2020, but had to be postponed because of the COVID-19 pandemic and should be completed within the current year. The next step will be to obtain approval from the Brazilian Health Regulatory Agency (ANVISA), and then license the system commercially.

The Biomechatronics Laboratory at the USP Polytechnic School is developing exoskeleton models for rehabilitation, physical therapy, injury prevention, as well as assistive applications, i.e. helping people with disabilities to perform day-to-day tasks. Engineer Arturo Forner-Cordero, head of the Biomechatronics Laboratory in the Department of Mechatronics Engineering and Mechanical Systems (PMR), says the team has already completed the control system architecture, which uses algorithms to determine each individual’s gait and generate a walking pattern. The position control and drive systems needed to modulate movement force have also been completed, but prototyping has been delayed as a result of the pandemic. “We should have our first prototypes ready around July,” estimates Forner-Cordero. 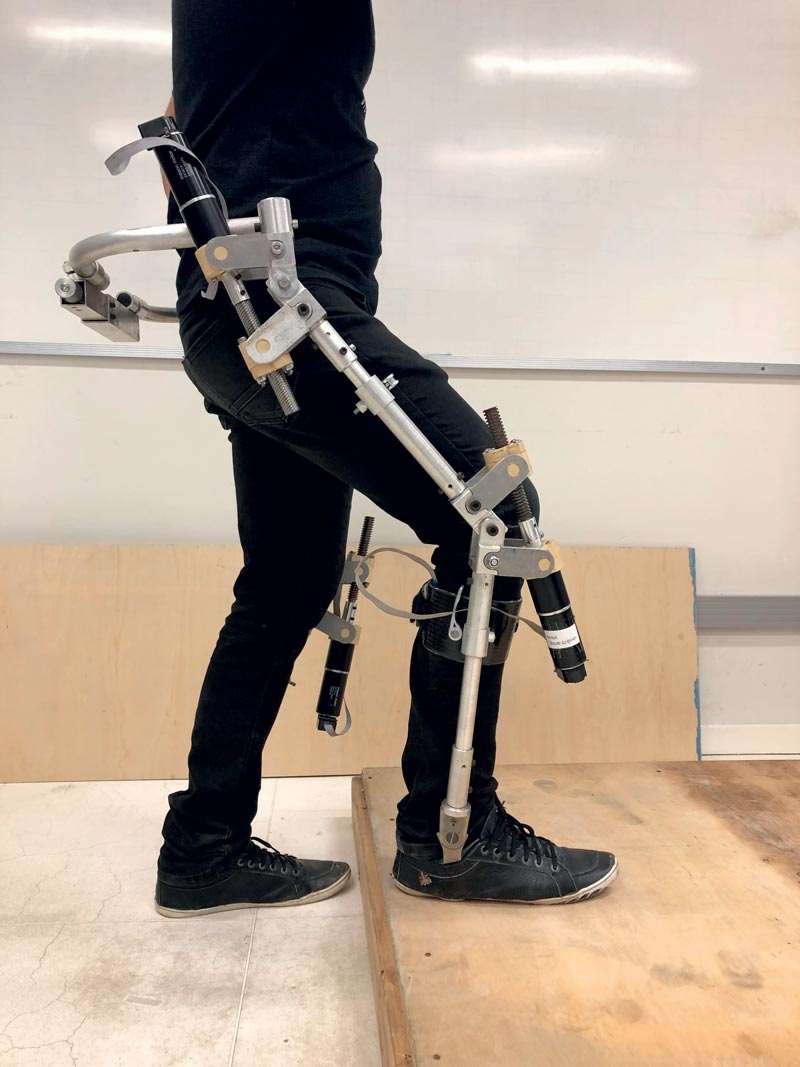 Two exoskeleton models for people with disabilities are currently being developed at POLI-USP, both powered systems. One uses a conventional drive system with a motor at each assisted joint. The other model uses a system in which the drive motors are housed in a backpack, and power is transmitted via bowden cables like the ones used on bicycles. “This reduces the amount of weight borne by weak joints, and instead places most of the weight on the user’s back,” explains Rafael Traldi Moura, a mechatronics engineer at PMR. The research is being funded by the Brazilian National Council for Scientific and Technological Development (CNPq).

In São Caetano do Sul (SP), tech startup Vivax developed a portable robot designed as a more affordable solution for upper limb rehabilitation. The robot—which the firm describes as the first of its kind—helps patients to exercise their arms by playing educational digital games that simulate everyday activities in a 3D environment.

The Assistive Rehabilitation Machine (A.R.M.), as it is called, uses a spherical coordinate system similar to a joystick. Each game is designed to stimulate specific movements. Using an interface, physical therapists select the games that are best suited for each patient, and the force the patient will be required to exert to perform the exercise. 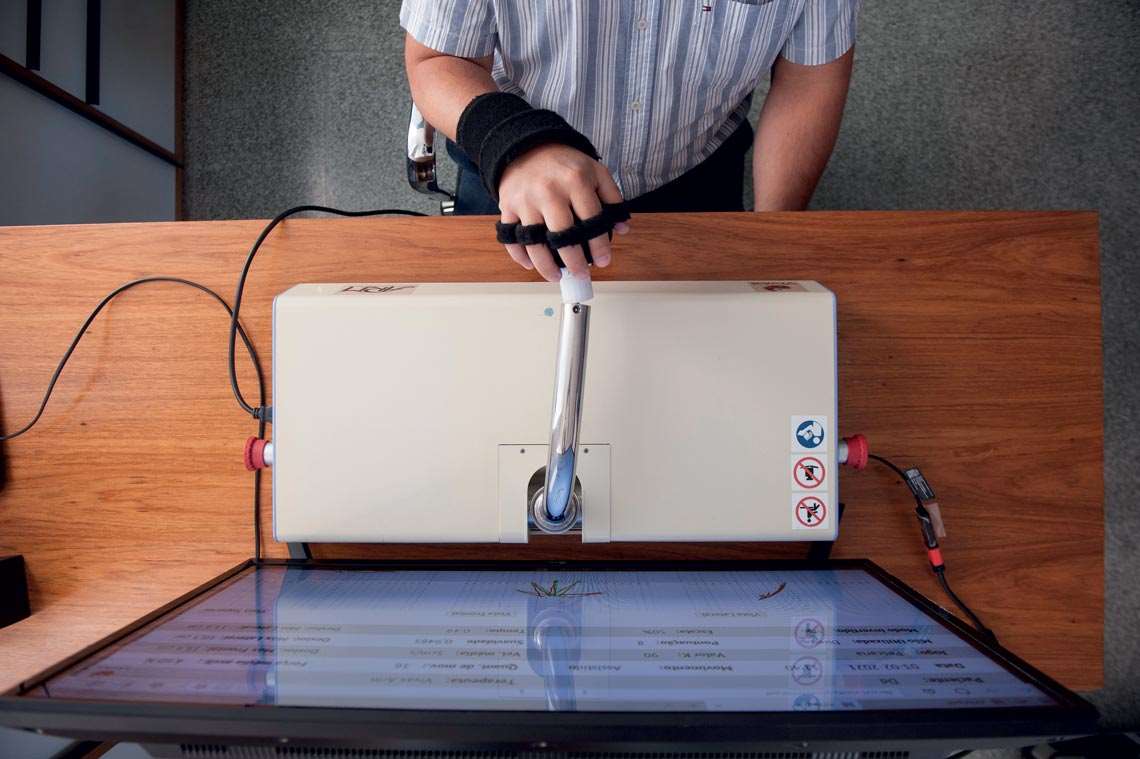 The A.R.M. System is portable, weighing approximately 15 kg, and is being sold for US$80,000. Nine units have been sold to the Lucy Montoro physical therapy network, and another two to the municipal government of São Paulo. “Our equipment is world-class, and we’re preparing to market it at scale,” says Makiyama. In 2021 Vivax plans to unveil a version of its A.R.M. system for lower members, featuring therapeutic games that users play using their feet. The robot was developed with funding from the Research for Innovation in Small Businesses (RISB, or PIPE in the Portuguese acronym) program.

For Battistella, from FM-USP, robotics can provide valuable support in rehabilitation by enabling patients to complete a larger number of repetitions than they would be able to without external assistance. “Physical exercise supports motor, cardiovascular, and cognitive improvement. Robot-enabled rehabilitation is a faster process and helps individuals resume their normal activities in less time. The social impacts can be significant,” says Battistella, who is leading a FAPESP-funded research group studying the neuroplasticity mechanisms involved in the motor rehabilitation process.

Exoskeletons, she says, are also a godsend for physical therapists, sparing them the physical exertion that is otherwise required to assist patients. Another benefit from robotics is the ability to create customized treatments for each patient using sensor information about the amount of effort and difficulty that the patient experiences to complete an activity. 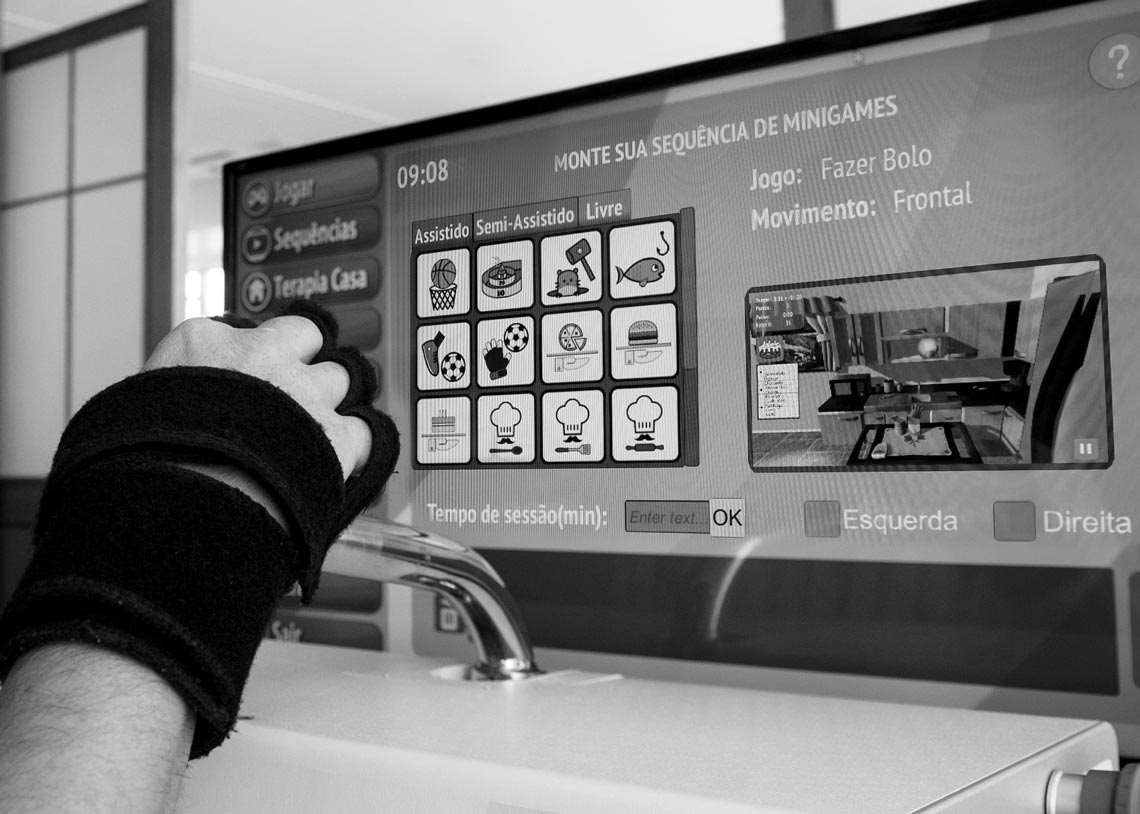 Léo Ramos ChavesThe wearable exoskeletons being developed at Brazilian universities have been proven in a laboratory setting to provide the same functionality for patient rehabilitation and data for medical staff as provided by analog models, says Battistella. Locally developed systems, she says, could potentially tap into a global market currently unexplored by Brazilian firms if they perform well in tests with patients.

“A product proven viable for use by Brazil’s SUS is likely to see rapid market growth. It would also find a market in Latin America, Africa, and Asia,” says the physical therapist, who is a member of the Guideline Development Group (GDG) advising the World Health Organization (WHO) on its Guidelines on Health-Related Rehabilitation.