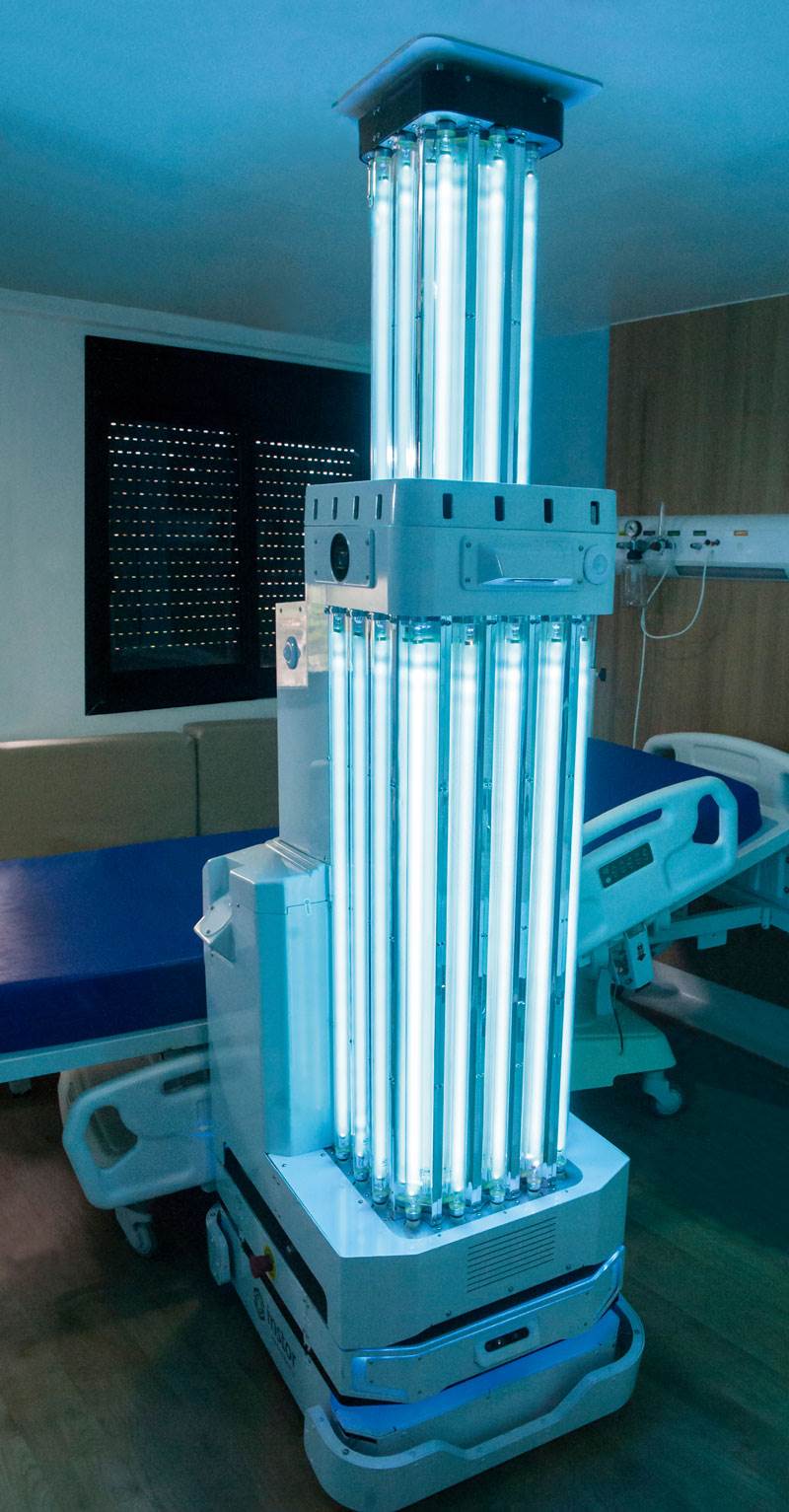 The global health crisis caused by COVID-19 has accelerated the development of robots designed to disinfect environments and keep them free of the novel coronavirus, as well as other viruses, fungi, and bacteria. In Brazil, Instor Projetos e Robótica, based in Porto Alegre in the state of Rio Grande do Sul, and e.Aí Tecnologias Inteligentes, from Recife in Pernambuco, have invested in this field in recent years. Their machines, created in partnership with universities, use artificial intelligence (AI) and ultraviolet radiation to perform disinfection duties. Already for sale and in operation, the robots can be used not only in hospitals, but also in classrooms, offices, stores, gyms, and many other environments.

“Several scientific studies have already shown that ultraviolet radiation type C [UVC] has a strong germicidal effect. It destroys the nucleic acid of viruses and bacteria, disrupting their DNA or RNA and leaving them unable to replicate and infect other organisms,” explains Miguel Ignácio Serrano, director of Instor and one of the leaders of the Jaci project.

The first version of the robot, on which development started in April 2020, was not autonomous and needed to be manually placed in different locations in the environment, one after another, until the entire area had been submitted to UVC light. A remote-controlled version was designed next. “Since exposure to UVC light is harmful to human health, the area has to be clear of people when the robot is in action. That’s why we decided to make it operate autonomously,” explains Serrano.

It was then that the idea arose to form a partnership with the Institute of Informatics at the Federal University of Rio Grande do Sul (UFRGS), where Serrano did his master’s degree. Researchers from the department were responsible for creating a method that would enable the robot to autonomously explore the environment, irradiating UVC rays at the dosage needed to disinfect the air, walls, and surfaces. The new version was ready in October 2021.

The team used mobile robotics techniques to allow the machine to navigate unfamiliar environments. “A map of the environment is constructed by an algorithm that receives information from a 2D lidar [light detection and ranging] sensor and three conventional cameras,” explains Mariana Kolberg, coordinator of the project at UFRGS and a member of the Institute of Electrical and Electronics Engineers (IEEE), an international body dedicated to the advancement of technology for the benefit of humanity. “The lidar covers a 180-degree angle and the cameras complement Jaci’s field of vision, detecting obstacles at different heights that are out of the lidar sensor’s range.”

The system also creates a map showing the amount of UVC applied to each part of the environment. “With this map, it is possible to identify points where irradiation is low. Jaci then returns to these locations and supplements the UVC by spraying an ozone mist, which also inactivates viruses and bacteria. The entire process is carried out without human intervention,” says Kolberg. “Before the pandemic, other autonomous disinfectant robots already existed in various places worldwide. Jaci is different because it combines UVC light and ozone mist.” An international patent has been applied for and is under review.

Other universities were also involved in the robot’s development. The Pontifical Catholic University of Rio Grande do Sul (PUC-RS) and private university Unisinos, both in Porto Alegre, showed the antimicrobial effects of the ozone mist, while the University of Campinas (UNICAMP) proved the effectiveness of UVC light against viruses. Meanwhile, UFRGS proved its effectiveness against bacteria. 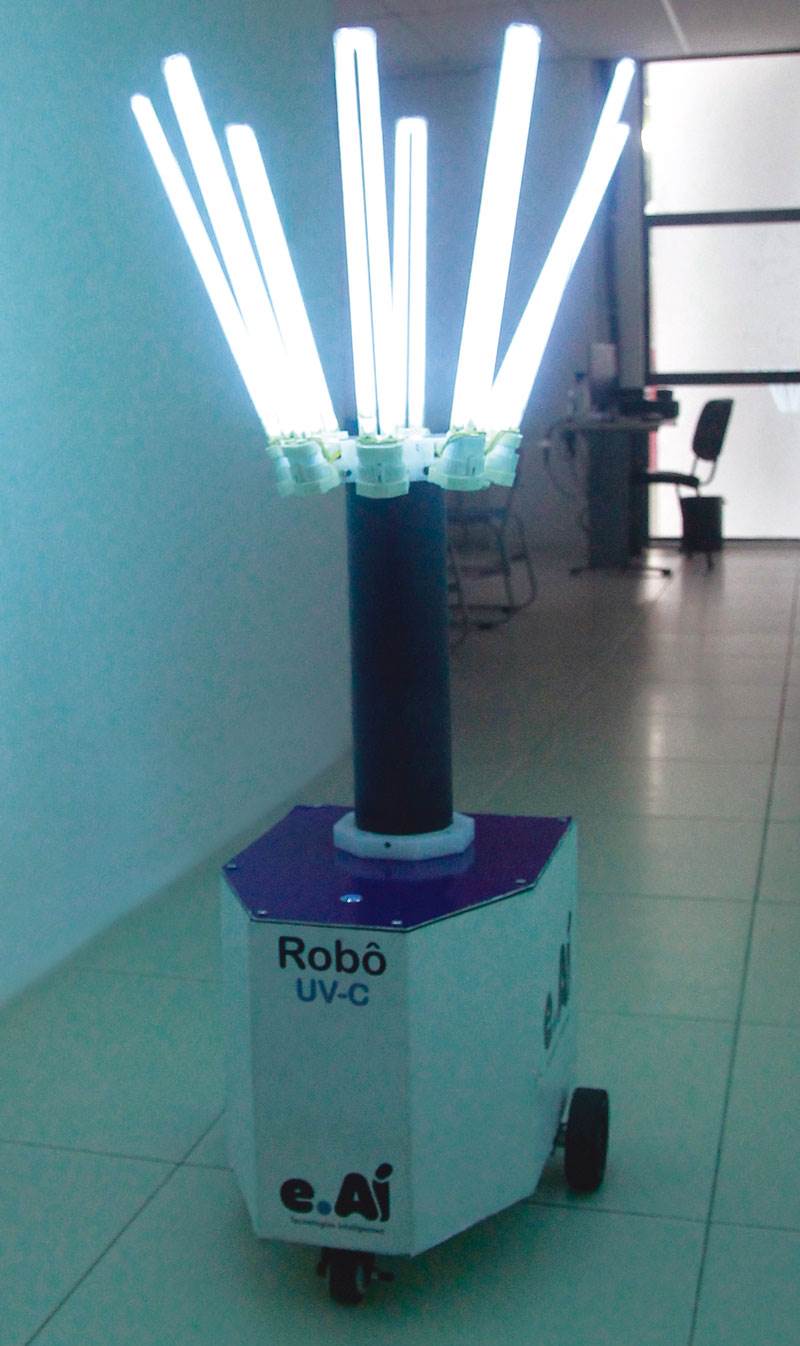 Eight months after its completion, the robot is now being used at the Conceição Hospital Group, the Unimed Hospital, and PUC-RS’s Hospital São Lucas, all in Porto Alegre, as well as at Premier Hospital in São Paulo. In June, after publication of this article, Jaci is scheduled to start operating at the Heart Institute (InCor) in São Paulo, based in the teaching hospital at the University of São Paulo (USP).

“We are always looking for new technologies to improve patient safety and infection-control processes and reduce the workload on our staff,” says Guilherme Rabello, commercial manager of the InCor Innovation Center. “The Jaci robot fulfills these requirements and can help us create a safer care environment while reducing costs and manual cleaning time and increasing staff safety.”

Instor, which has been developing robots for the oil, gas, and mining sectors for 14 years, also allows customers to rent out their machines.

At 80 centimeters tall, the robot created by e.Aí Tecnologias Inteligentes is controlled via an app. “Our device moves independently around its environment thanks to sensors and AI methods capable of identifying clear routes for navigation. It can disinfect a 25-square-meter room in about three minutes,” says Leandro Maciel Almeida, founder of the startup and a professor at the Informatics Center of the Federal University of Pernambuco (CIN-UFPE).

The robot was born from a project approved at the university in May 2020 that included the participation of researchers from the Federal Institute of Pernambuco (IFPE) and the Regional Center for Nuclear Sciences in the Northeast (CRCN-NE). “After a public call for proposals, UFPE provided R$60,000 in funding for 10 units, but not all of them were completed. The robot, called Aurora, was tested at the University’s teaching hospital, reducing the amount of microorganisms in the environment by an average of 95%,” highlights Almeida.

According to CRCN-NE physicist Clayton Benevides, who was part of the Aurora team, the biggest technological challenge was making a robot with a high level of autonomy that could provide a high dose of UVC but was not too costly. When the UFPE project came to an end, e.Aí Tecnologias was founded to continue development of the robot. Its business model includes monthly disinfection packages from R$300 and up. Six machines are already in operation.

“Similar robots are being used in Canada, the USA, Asia, and Europe. Foreign companies sometimes present their solutions at fairs in Brazil, but they are very expensive,” says Almeida. “We developed our robot with the aim of popularizing ultraviolet radiation disinfection technology at a lower cost.”