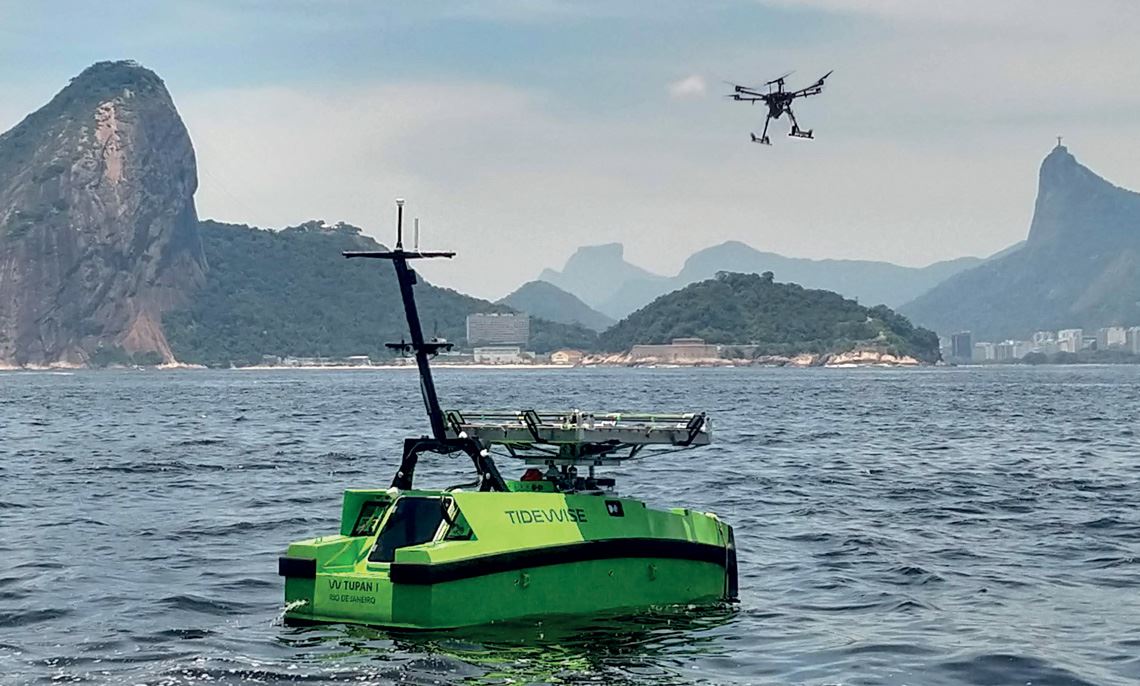 The Tupan vessel and its drone being tested in Guanabara Bay, Rio de Janeiro

A new autonomous system has been developed to make maritime monitoring more efficient and reduce the response time to oil spills at offshore oil platforms. Named ARIEL (Autonomous Robot for Identification of Emulsified Liquids), the system is composed of a boat called Tupan and a drone, the two of which work in unison to collect visual data and water samples. “There is nothing like it in the world. As far as we know, this is the only autonomous double-checking system and the only one capable of collecting samples at sea without human interference,” says Alessandro Jacoud, a professor from the Electrical Engineering Program at the Federal University of Rio de Janeiro (UFRJ) and head of the project.

ARIEL is in the functional prototype phase and initial tests have already been carried out in Guanabara Bay, Rio de Janeiro. Further tests will be conducted at sea this year. The equipment is being developed by the Automation and Robotics Simulation and Control Group, part of the Electrical Engineering Program at UFRJ’s Alberto Luiz Coimbra Institute for Engineering Research and Graduate Studies (COPPE), in partnership with startup Tidewise and oil and gas company Repsol Sinopec. In November 2021, it won the 2020 Technological Innovation Award from Brazil’s National Agency for Petroleum, Natural Gas, and Biofuels (ANP) in the Reduction of Environmental Impacts and Renewable Energy category.

Tupan uses hybrid propulsion (diesel and electric) and can operate autonomously for up to 12 days. The plan for the second phase of development is for it to be usable in the field for at least 30 days uninterrupted. At 5 meters (m) long, the boat is responsible for carrying the drone to predetermined areas for monitoring. The inspection frequency and schedule are established according to requirements defined by the oil platform operators. At the determined locations, the drone automatically takes off and flies autonomously for up to 30 minutes. It then returns to the boat to recharge its battery.

Equipped with location sensors, a video camera, and a thermal camera with an infrared sensor, the drone alerts the vessel when it detects signs of the presence of oil, such as a different color or temperature in the water. The information is immediately sent to Tupan, which moves to the identified location to collect a water sample and carry out tests using a fluorimeter, which measures the fluorescence of the sample and can provide proof of the impurity. If the presence of oil is confirmed, an alert is sent to the onshore monitoring center and nearby oil platforms so that they can adopt any necessary measures.

Artificial Intelligence
Luiz Landau, a civil engineer and professor at UFRJ and head of the Computational Methods in Engineering Laboratory at COPPE, explains that data collected by satellite are processed with the aid of artificial intelligence to speed up the process and reduce the chance of false positives. Oil changes the roughness and color of the sea surface. In a processed satellite image, this change appears as a dark patch. However, not every dark patch is oil. False positives can occur, for example, when there is a high concentration of algae or intense rainfall that present signs of roughness similar to oil stains.

The entire procedure, from receiving the satellite data to analysis by the system, can take between four and five hours. The speed of the response also depends on the amount of satellite images provided, since the data is only captured when a satellite passes through the monitoring area. “It’s an efficient system, but still a little slow. ARIEL aspires to provide information in real time, substantially reducing the risk of misinterpretation,” says Landau.

In oil fields without constant satellite monitoring, where not enough information is collected to know for sure whether an oil leak has occurred, a manned vessel must be sent to the location to collect samples and evidence. This takes time and money and exposes the crew to risk. “ARIEL makes the monitoring safer and more efficient, as well as reducing the costs associated with this task,” says Andreotti.

The main technical challenges the project had to overcome were related to the routines needed to allow the drone to independently take off, fly, and land. Jacoud names four distinct operational phases, all carried out with the aid of GPS, sensors, video cameras, and software to adjust the trajectory.

The first phase is the drone taking off by itself and hovering over the boat, avoiding obstacles such as the mast. The second is the flight of the drone following a preprogrammed trajectory around the monitored area, while dealing with uncertainties such as wind strength and wave height. It also needs to stably hover over any area where a potential leak is detected to ensure a high-quality visual sample can be collected.

The third phase is for the drone to locate Tupan, which moves with the current, and return before its battery runs out. To reduce operational risk, the drone is programmed not to stray outside the boat’s radio communication range: an area of between 2 and 3 kilometers in radius, depending on obstacles.

The fourth and final phase is the most problematic. “Finding the boat is not a major technical challenge, but landing is,” says Jacoud. The wind and the movement of the water, especially in rough seas, make this a difficult procedure. The drone needs to approach the boat without hitting the mast, find the precise area it is designed to occupy on the vessel—like a kind of helipad—and calculate its trajectory and landing speed.

The ARIEL project was started in 2019 and received R$7.3 million in funding from Repsol Sinopec during the first stage of development. The second stage began in November 2021 and is expected to last 18 months. A new boat is being designed by Tidewise, a startup founded by naval engineer Rafael Coelho, and French software engineer Sylvain Joyeux, who previously worked at the German Research Center for Artificial Intelligence (DFKI). “The new vessel will be over 12 meters long and will probably use non-fossil fuels, such as hydrogen, remaining autonomous at sea for 35 days,” explains Coelho.

It will also be equipped with new features and sensors for interpreting samples, the configuration of which has not yet been fully decided. “One of our objectives will be to determine the chemical structure of any oil found, to identify the field of origin,” says Coelho. Knowing which platform the oil leaked from is essential to quickly suspending operations to prevent the oil spill from worsening.

Another desired feature is a computational system that can simulate meteoceanographic conditions in real time for oil dispersion models that could be used to prevent further damage. Luiz Landau believes that with these two new features, ARIEL will reach another level, making it the complete oil-spill monitoring system for offshore platforms.

The system is also being tested with other offshore activities. In June 2021, Tidewise won the Open Innovation Challenge, a call for research proposals by the Elia Group, one of Belgium’s biggest electricity producers, and German electricity transmission company 50 Hertz. The initiative involved 78 startups from a range of countries that are working on innovative solutions for applications related to offshore electricity generation and transmission.

In addition to the €20,000 prize, Tidewise will be given the opportunity to test its monitoring system at Elia’s offshore wind farms in Belgium. “First of all, we will conduct an autonomous visual inspection of the platforms and turbines and the underwater electrical cables that transmit the energy to the land,” says Coelho. Marcelo Andreotti, from Repsol Sinopec, believes ARIEL has great potential for applications beyond monitoring oil production. “This system can be used in multiple ways to monitor environmental control data,” he says.