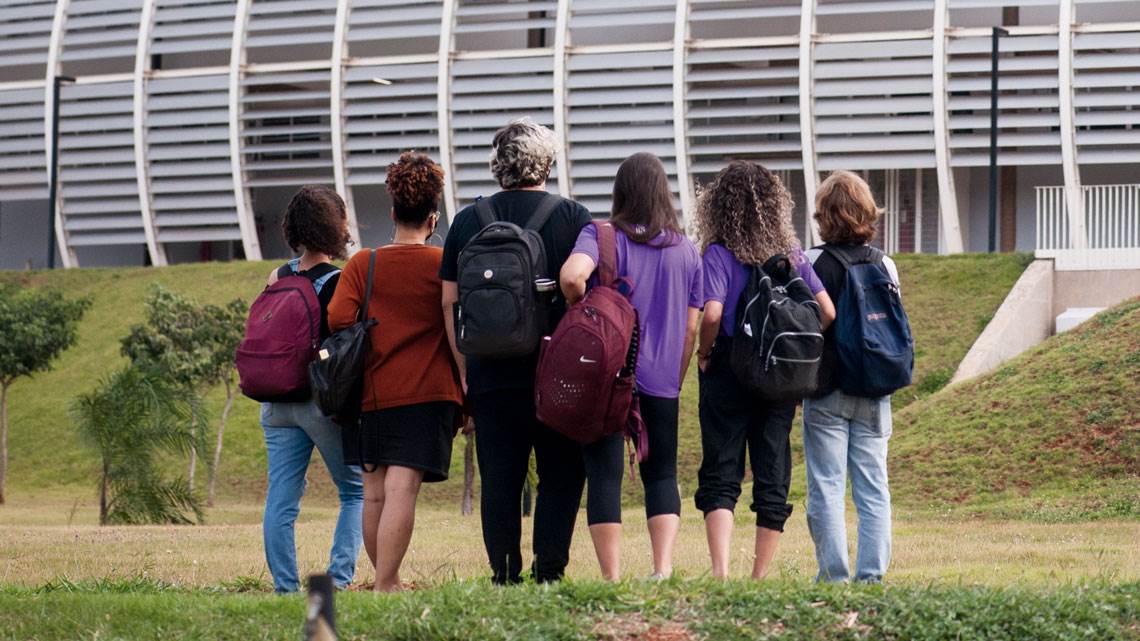 Almost 35 years after housing the first researchers from the Brazilian Synchrotron Light Laboratory (LNLS), an old warehouse in Campinas, São Paulo State, has been transformed into a space for the first interdisciplinary bachelor’s degree on science, technology, and innovation offered by Ilum, the school of science run by the Brazilian Center for Energy and Materials Research (CNPEM), which manages the LNLS. At the beginning of March, 40 students aged 18 on average took their first classes on life science, materials science, mathematical languages, humanities, and entrepreneurship, which together comprise the curriculum of the three-year course. All students are entitled to free food, housing, transportation, English classes, and a laptop for use during their studies.

Every week, they visit the CNPEM laboratories, located roughly 10 kilometers (km) from the Ilum building: the biosciences lab (LNBio), biorenewables lab (LNBR), nanotechnology lab (LNNano), and Sirius, a state-of-the-art synchrotron light source, the most complex research instrument ever built in Brazil. On these visits, students often stop on the path between labs to pose for selfies in front of Sirius. “I’d been thinking about studying medicine, to do research in disease diagnosis. When I found out about Ilum and that it would focus on a scientific career from the very beginning, with access to CNPEM laboratories, I realized it was a better match for me,” said 18-year-old student Eduarda Veiga, from Montalvânia in the state of Minas Gerais, during a short break in her Python programming language class.

Veiga and her classmates were chosen from almost 1,000 applicants. The first stage of the selection process looks at the candidate’s score on the National Standardized High School Exam (ENEM) and their letter of application, in which they explain why they want to be a scientist. “I started my letter with a quote by Carl Sagan [1934–1996], in which he says that somewhere, something incredible is waiting to be discovered. I wrote about how much I want to be one of the people making these discoveries,” says Veiga, who has a long history in student projects and science fairs. 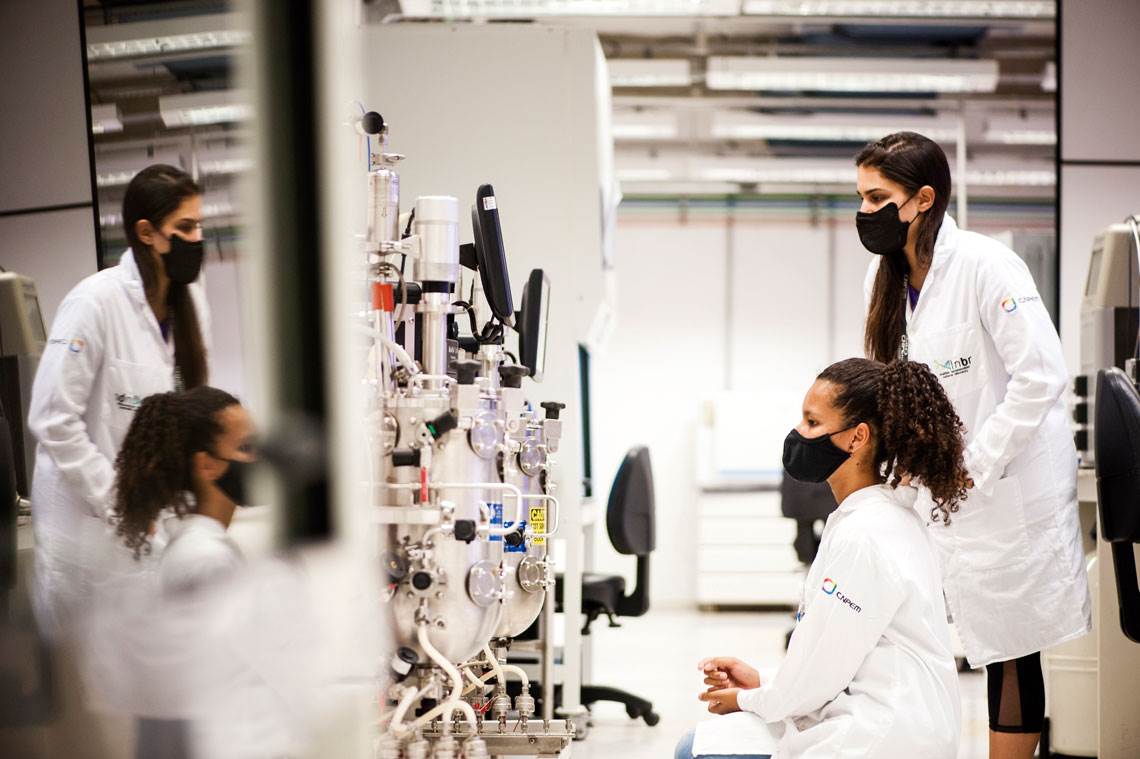 The selection process also involves an interview, at which candidates are asked about practical, everyday scientific knowledge, such as how a pressure cooker works. “Basically, we’re looking for scientific geniuses,” says physicist Rogério Cézar de Cerqueira Leite, honorary chair of the CNPEM’s Board of Directors and founder of Ilum. “In my opinion, shaped by a career spanning nearly 70 years in teaching, they are not the students with the best grades, but those who are most inquisitive and curious.” Half of the places were reserved for students from public schools.

The idea of creating a new undergraduate school began to take shape in 2016, when Cerqueira Leite presented the proposal to a group of CNPEM researchers and directors. Among them were physicists Antonio José Roque da Silva, now director of the center, and Adalberto Fazzio, who at the time was head of the LNNano lab and is now director of Ilum and a retired professor at the University of São Paulo (USP). “We noticed that many researchers take a long time to start carrying out independent research after they graduate, especially in interdisciplinary, cutting-edge fields. That’s why we want to offer early education in science,” says Fazzio, who helped implement the innovative and interdisciplinary model at the Federal University of ABC (UFABC), where he was dean between 2008 and 2010.

According to Fazzio, the objective is for students to be able to go straight onto a PhD, to continue as a researcher in academia or at a company, or to create their own startup. “We seek to create a single base with a convergence between physics, chemistry, and biology and a strong foundation in mathematics and computing, to train the types of scientists that we see as important in the near future,” adds Cerqueira Leite, referring to experts in artificial intelligence, data analytics, or machine learning, for example. “As a professor at UNICAMP [University of Campinas], I saw many brilliant high school students who participated in science competitions becoming lost in the crowd when they started university. In my view, they would develop better if they had more attention and mentoring.” 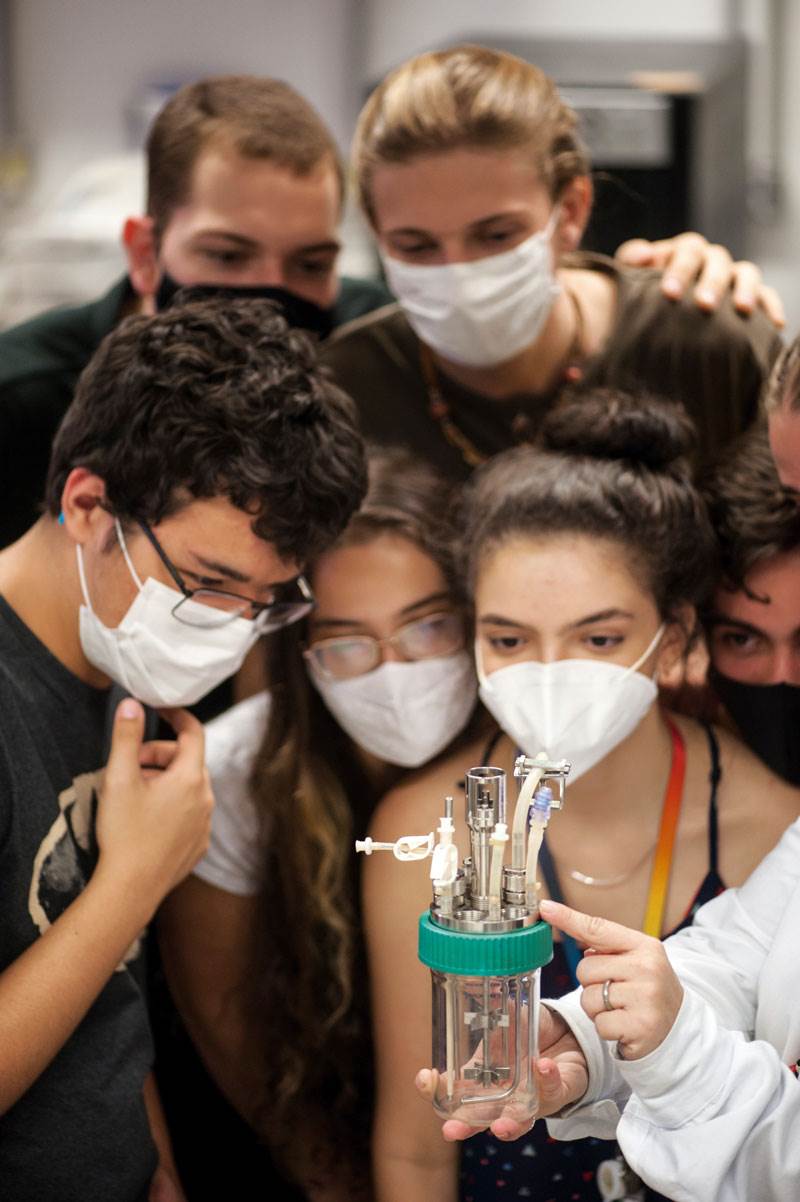 It was this possibility that attracted 19-year-old Pedro Zanineli from São Paulo, who transferred to the course in his second year of a computer engineering degree. “I realized that I was really interested in data science and academia, and that I can work in this area during my degree by combining computing, research, and innovation,” says Zanineli, who found out about the Ilum selection process on Instagram. The multidisciplinary nature and link to technology also attracted Ana Clara Loponi, 18, from Campinas. “I took a technical course in computer science and want to take advantage of this knowledge. I want to work with artificial intelligence applied to science,” she says.

Isabela Beneti, 18, from Goiás, was offered places on UNICAMP’s chemical engineering course and the agronomic engineering course at the University of São Paulo (USP), but opted to study her bachelor’s degree at Ilum. “In the first few weeks, we are already learning programming—which is the basis of research these days—and working with Arduino [an open-source electronic hardware prototyping platform], and it’s really exciting. We’re already getting our hands dirty,” says the student, who won two gold medals at the Brazilian National Science Olympiad during high school. She placed first among the 40 selected by Ilum—of the 10 applicants with the highest grades, nine were women, who make up 48% of the first class.

In the classroom, students sit at tables in groups of four while their professor circulates among them answering questions. “We don’t give lectures. We discuss questions and solve problems in groups,” says Juliana Smetana, a professor at the university and researcher at CNPEM. In this first semester, she is teaching the introductory course to molecular biology, genetics, and biochemistry. “In our first class, we talked about the definition of life. The students were prompted to come up with a concept based on their own research. The classes are busy and noisy, because everyone gets involved,” she explains. Theoretical classes were designed to fit around activities at the institution’s laboratories—information technology, life sciences, and material sciences—where students can use equipment such as atomic force microscopes and tunneling microscopes, which allow atoms and molecules to be observed. 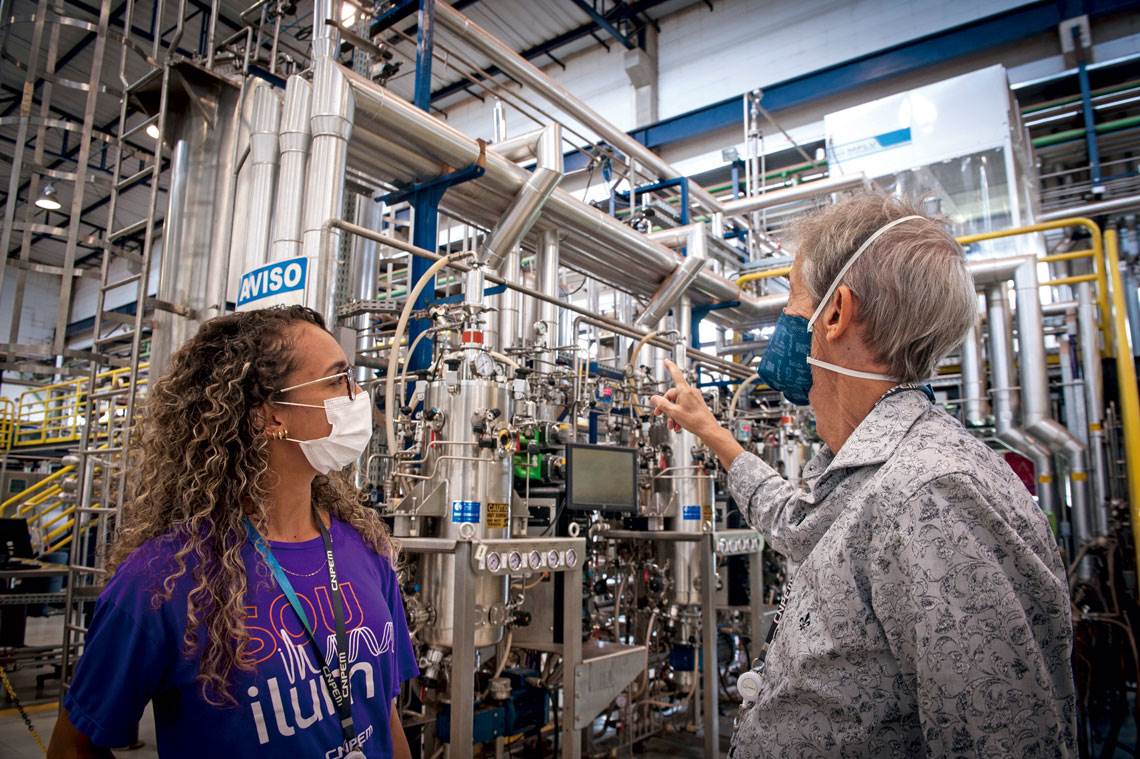 The content and exercises are available on open-source learning platform Moodle, which is preinstalled on the laptops given to students at the beginning of the course. “Laptops are one of the key tools of our active teaching methodology, which is designed to place the student as the protagonist, with learning based on problem solving. The professor is a mediator,” explains physicist Nelson Studart, retired professor at the Federal University of São Carlos (UFSCar) and academic coordinator at Ilum.

According to Studart, sitting students together increases peer-to-peer learning, since students who excel at particular subjects can help the others. The classrooms also have mobile whiteboards, with students encouraged to move them around, noting down ideas as they carry out practical activities. “We looked at the teaching models used in courses at Harvard University and MIT [Massachusetts Institute of Technology], where they practice technological support and strong interaction, combined with the dialogue method proposed by educator Paulo Freire [1921–1997]. The professor teaches, but also learns.” 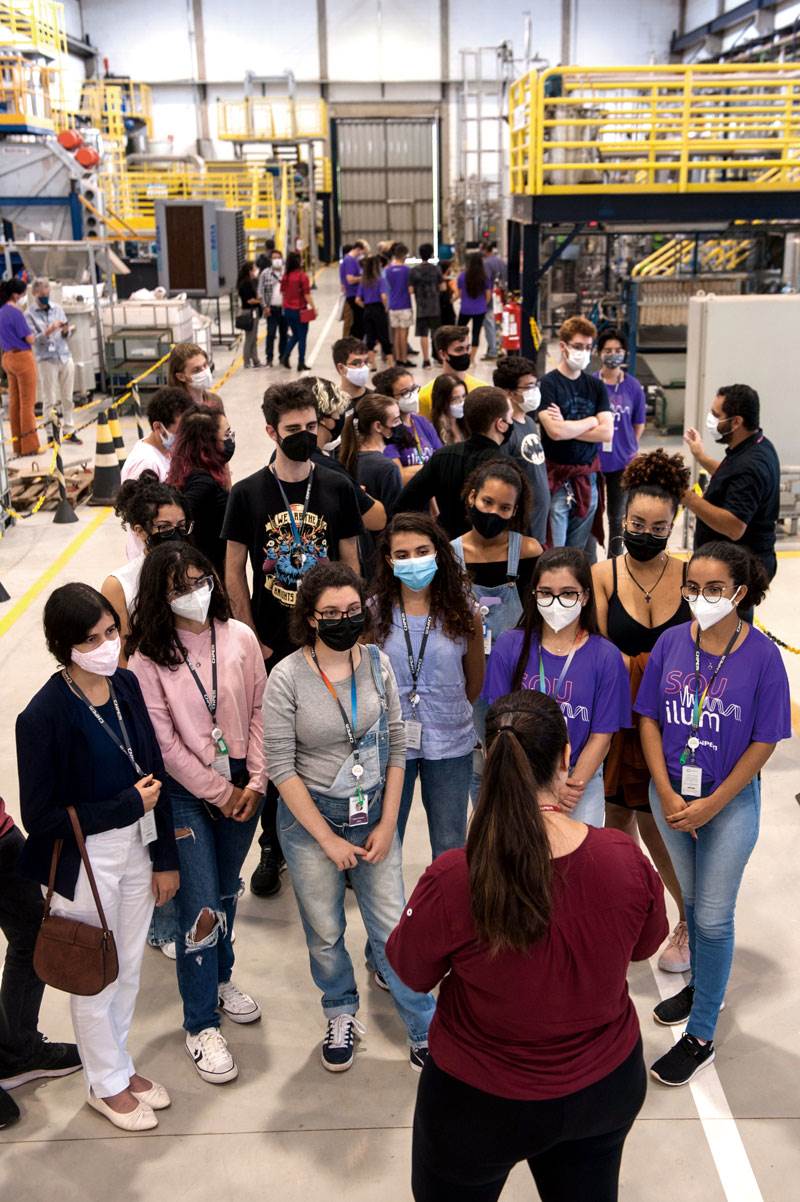 Immersion at the CNPEM laboratories occurs progressively, starting with visits and small tasks carried out under the supervision of scientists from the facilities. The plan is for students to spend every day of the week in the labs during the last semester, working on regular projects in groups. “This is important because it’s no use being a genius if you only know how to work alone. A good scientist needs to know how to lead, be led, and work as part of a team,” says Fazzio. Roque da Silva, director of CNPEM, stresses that the course was not created to provide scientists to its national laboratories. “We hope that these young scientists will be prepared to solve problems at the frontiers of knowledge, such as climate issues, for example. A whole universe will open up to them,” he says.

Cerqueira Leite says that the idea for Ilum—the name of which is derived from the word illuminate, referring both to Sirius and synchrotron light and to the symbology of the knowledge process shining like a light—came to him over the course of his own key experiences in academia. According to him, the two main inspirations are the École Normale Supérieure in Paris, whose labs he frequented during his PhD and which also takes an interdisciplinary approach to undergraduate science degrees, and the Technological Institute of Aeronautics (ITA) in São José dos Campos, where he studied his degree. “They pay special attention to the students, who are given housing and food allowances so that they can dedicate themselves fully to their studies,” he explains.

Interdisciplinary degrees are not new in Brazil. One of the first was USP’s bachelor’s degree in molecular sciences, created in 1991, which was designed to prepare students for a scientific career and covers biology, chemistry, mathematics, physics, and computing. For a long time, the course had a reputation for the high level of its students, due to its rigorous selection process among students who had already enrolled in regular university courses. “We are not inventing the wheel here. But the combination of active teaching methodologies, close student monitoring, the interdisciplinary curriculum, immersion at CNPEM—the largest research infrastructure available in the country today—and the other benefits we offer make the course unique in Brazil,” highlights Roque. 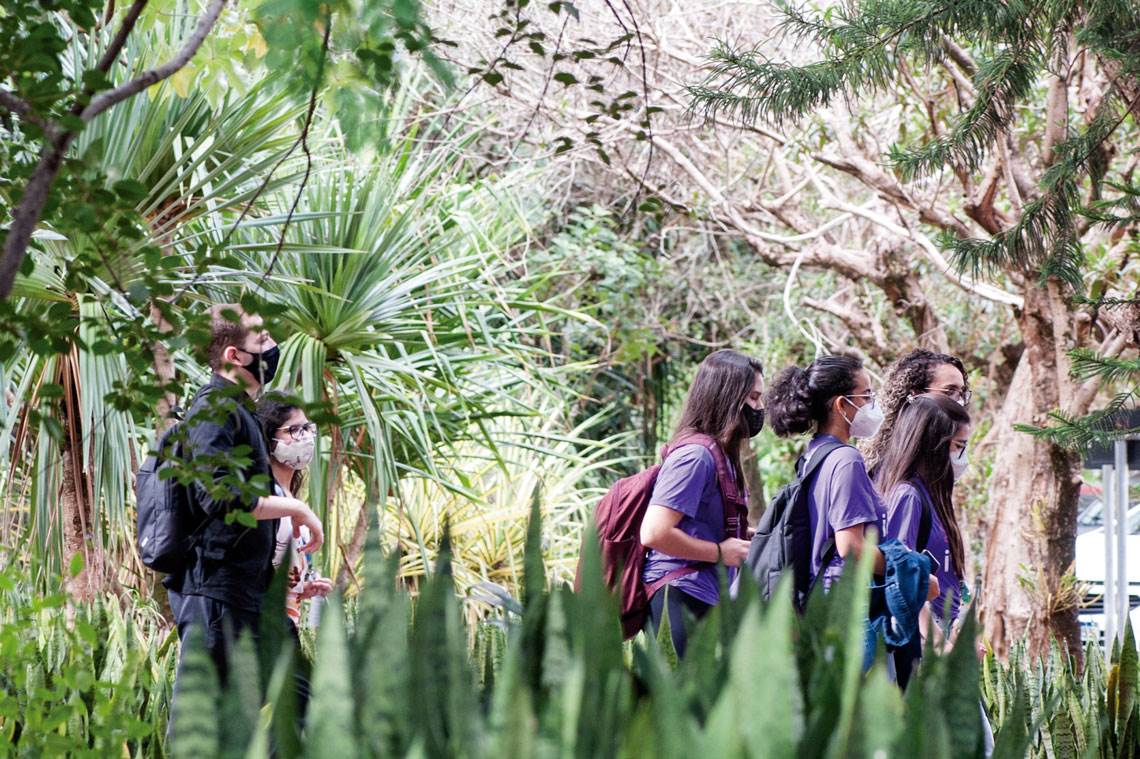 The school is maintained by the Brazilian Ministry of Education and funds are transferred to CNPEM by the Ministry of Science, Technology, and Innovation. In 2018, Ilum received R$15 million to structure the project, purchase equipment, and renovate the building, which in the late 1980s housed the first parts of the UVX: the LNLS’s first particle accelerator. In 2020, it received R$9.7 million and in 2021, R$9.8 million. The 2022 budget is still under negotiation and should be around the same amount, according to Fazzio. The selection process for the second class will take place later this year.