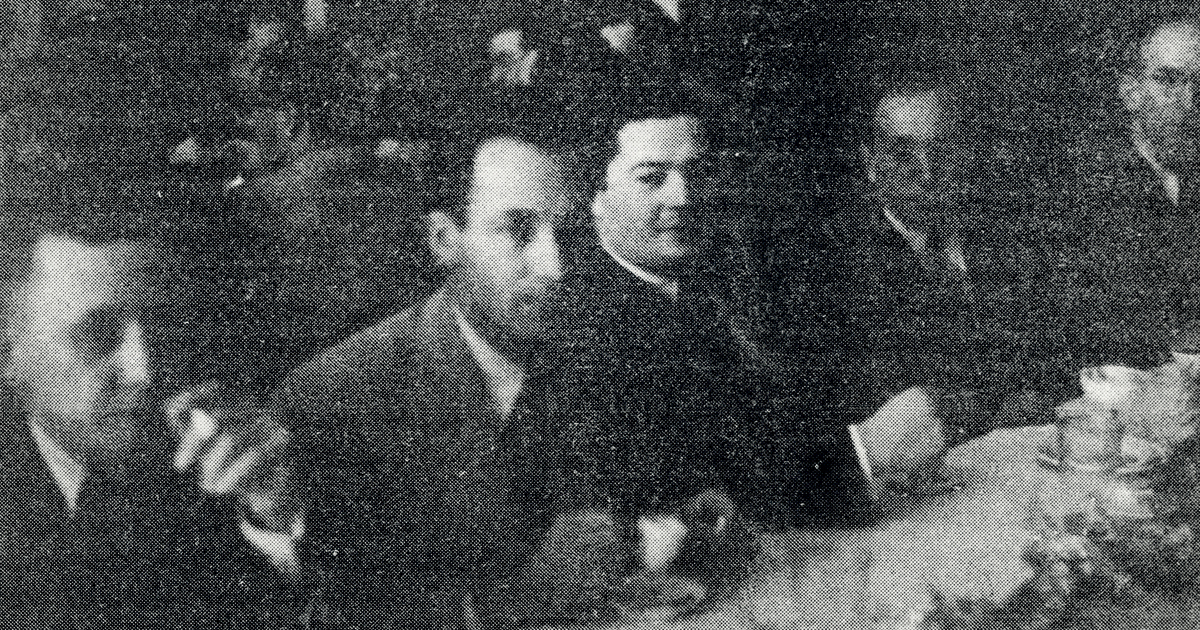 Rocha e Silva (center) at the 1st Annual Meeting of the SBPC, in Campinas (1949)

The lively Friday meetings, or referatas, of scientists from the Biological Institute of São Paulo to discuss developments in science and culture with other intellectuals, celebrities, and the general public, no longer sufficed. In 1948, the need for a broader forum for sharing ideas led to the creation of the Brazilian Society for the Advancement of Science (SBPC). Intended primarily to foster better communications among researchers, the association soon grew in influence alongside other research or science-support institutions that emerged in the 1950s, and helped to shape the science research frameworks that are in place in Brazil today.

“Creating the SBPC was a form of self-affirmation for scientists in São Paulo,” says science historian Maria Amélia Mascarenhas, a senior lecturer in the Department of History at the School of Philosophy, Languages and Literature, and Humanities at the University of São Paulo (FFLCH-USP).

Rio de Janeiro was then Brazil’s capital and was more prominent on the science scene. But São Paulo could also hold its own. Across the city there were campuses run by USP, established in 1934, and the Biological Institute, created in 1927 and then one of the most important research centers in Brazil. The city was home to a number of researchers who had come from Instituto Oswaldo Cruz, in Rio de Janeiro. Among them was physician Henrique Rocha Lima (1879–1956), the institute’s scientific director, who had worked with such names as Oswaldo Cruz (1872–1917), Adolfo Lutz (1855–1940), and Carlos Chagas (1879–1934) and had identified the bacterium Rickettsia prowazekii as the cause of typhus while in Germany (see Pesquisa FAPESP issue no. 231). In 1948, one of SBPC’s founding members, physician and pharmacologist Maurício Oscar da Rocha e Silva (1910–1983), then at the Biological Institute, and his colleague Wilson Teixeira Beraldo (1917–1998), from USP, discovered the molecule bradykinin, a potent vasodilator later used in antihypertensive drugs.

“Scientists in São Paulo wanted a place to call their own because they felt they had no place in the Brazilian Academy of Sciences [ABC], which only accepted the most notable of scientists,” says Mascarenhas. Contrasting with the more elitist ABC, which was founded in Rio de Janeiro in 1916, SBPC was open to anyone with an interest in science. “No technical qualifications are required for admission as a member, but only a desire to contribute in some manner to the advancement of science in Brazil,” wrote Ana Maria Fernandes (1948–2018) in her book A construção da ciência no Brasil e a SBPC (The construction of science in Brazil and the SBPC; Editora UnB, 1990), in which she explores the early history of the institution.

Although based in São Paulo, the new association began with 256 founding members from all across the country. A year later it had 352 members, “albeit nearly all researchers in the exact and natural sciences,” says Fernandes. Today, SBPC has around 5,000 members, after peaking at 16,700 in the 1980s. The American Association for the Advancement of Science (AAAS), one of SBPC’s sources of inspiration, began in 1849 with 78 members and currently boasts about 120,000.

In a seminal meeting in May 1948, biologist Paulo Sawaya (1903–2003), from USP, Rocha e Silva, and physician José Reis (1907–2002), from the Biological Institute, decided to invite fellow scientists to found an association modeled after similar organizations in the UK, Argentina, and the US. Rocha e Silva had witnessed how American and British scientists were institutionally organized when he worked in the United States and England between 1940 and 1946. The group had grown in size when they met a month later at the São Paulo Medicine Association and appointed a committee to draft the new institution’s bylaws.

Biologist Paulo Sawaya, a professor at USP and one of the founders of SBPCSBPC archives

On July 8, the bylaws were approved and the new association was formalized under the chairmanship of lawyer and USP professor Jorge Americano (1891–1969). Rocha e Silva was elected vice chairman, Sawaya as treasurer, and Reis as general secretary. Among its founding documents were the SBPC’s mission statement: to promote science and the independence of Brazilian researchers; to increase cooperation among research centers; and to promote a better understanding of science among specialists from other fields, through publications, courses, advocacy, and meetings between scientists and the general public.

In 1948, basic research in Brazil “was clearly at a disadvantage to applied science, medicine, and technology, for example,” said Rocha e Silva in an opening address to the 10th annual meeting of the SBPC in June 1958, at USP’s Butantã campus in downtown São Paulo. “Writers, artists, poets, physicians, and metallurgists all had well-organized conferences,” he said. “But scientists were indifferent to their peers’ work other than as a subject of disputes and disparagement.”

Circumstances, however, were on the side of science. “After World War II, and especially in the United States, science came to be seen as a matter of national security,” says philosopher and science historian Antonio Augusto Passos Videira, a professor at Rio de Janeiro State University (UERJ). “The Brazilian military and politicians were convinced that national sovereignty would be in jeopardy without scientific advancement.” As an example of this interest, General Henrique Lott (1894–1984), while serving as a military attaché at the Brazilian embassy in Washington from 1946 to 1948, sent reports to the government on US strategies to win the Cold War, which included massive investment in science and technology.

“The US hasted to train physicists, and began to see scientists as an essential part of the nation’s workforce,” says Videira. “Military support for science, especially in the field of atomic energy, partly explains the rapid rate at which science-support institutions were created.” Nuclear physics had become a dominant field. And one of the brightest stars at that time in Brazil was physicist César Lattes (1924–2005), who in 1948 had codiscovered the pi meson, acquiring world fame (read more about Lattes in the Igor Pacca interview on page 28, and in Pesquisa FAPESP issue no. 110). The heightened interest in this field led to the creation of the Brazilian Center for Physics Research (CBPF) in Rio de Janeiro in January 1949, followed in August by the creation of the Superior War College, also in Rio.

In 1948, a bill was proposed to establish a national research council, but was unsuccessful. In the following years, as a result of advocacy by ABC and Admiral Álvaro Alberto da Mota e Silva (1889–1976), a new agency to manage the government’s atomic energy program—the National Research Council—began to take shape. It was formally established in 1951 and later renamed the Brazilian National Council for Scientific and Technological Development (CNPq), as reported by historian Ana Maria Ribeiro de Andrade, a retired researcher at the Museum of Astronomy and Related Sciences (MAST), in a 2001 article in the journal Parcerias Estratégicas. The year 1951 also saw the creation of the Brazilian Federal Agency for Support and Evaluation of Graduate Education under the leadership of educator Anísio Teixeira (1900–1971).

Historian Heráclio Duarte Tavaress, a researcher at the Federal University of Rio de Janeiro (UFRJ), argued in a 2015 article in the journal Contemporânea that support from the military, including Lott, was also instrumental in the creation of the São Paulo Institute for Theoretical Physics (IFT), which began to function in June 1952 and was later merged into São Paulo State University (UNESP). In August that year the Institute for Pure and Applied Mathematics (IMPA) was founded in Rio de Janeiro.

Nationalism
“The SBPC tried to show that science, like culture, should be part of the country’s identity, just as Germanic peoples in the late seventeenth century showed that science, culture, and language were tools for national unification,” says Videira. He also notes another aspect of the historical and scientific context surrounding the creation of these institutions: “Scientists began to realize that they had to do not only science, but also politics.” Mascarenhas, from USP, ads that “the generation of scientists who created the SBPC were deeply nationalistic and optimistic, and were convinced that science ought to contribute to the betterment of the nation.”

In 1949, the first of successive annual meetings in Campinas and the launch of the journal Ciência e Cultura marked the association’s initial efforts to extend scientific outreach to broader audiences. Similarly, the Biological Institute has since 1935 published the monthly journal O Biológico, written by researchers in plain language geared primarily to rural audiences. Some of the journal’s early articles evidenced the particular pleasure taken in writing by José Reis, who would later become widely known for his column in the newspaper Folha de S.Paulo.

The first article in a four-part series celebrating the 70th anniversary of SBPC.
The next article in the series will deal with the SBPC’s efforts in defense of science in Brazil.