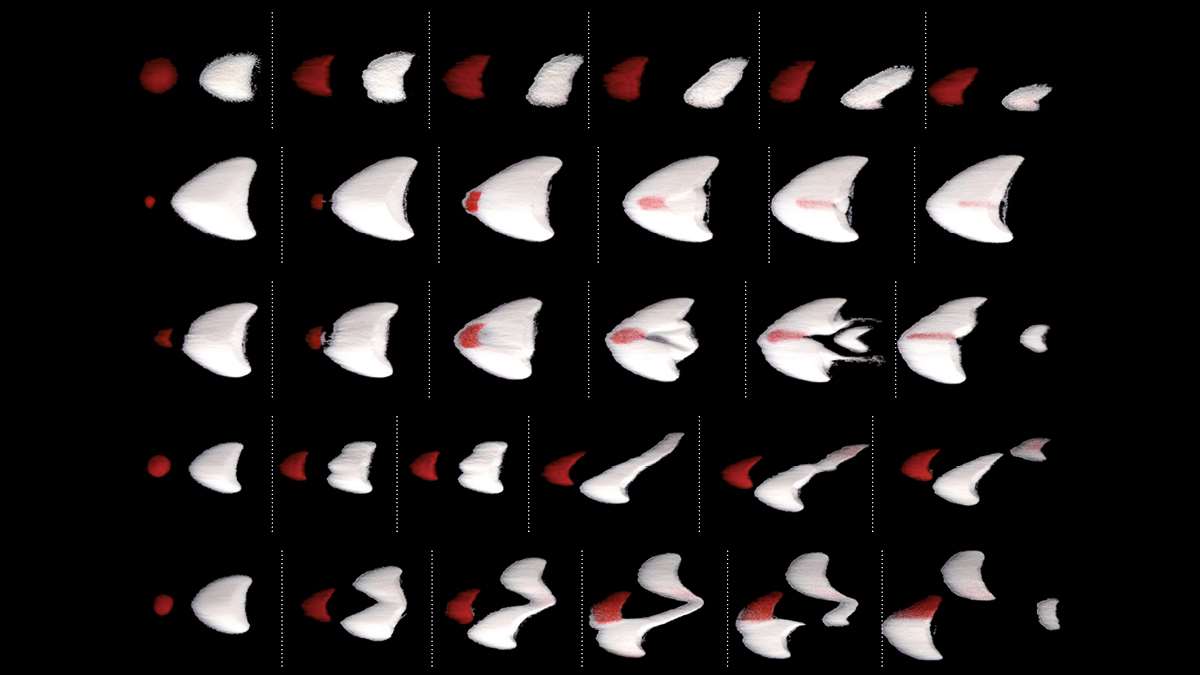 According to a study by researchers from UNICAMP, crescent-shaped sand dunes known as barchans can interact in five distinct ways (top to bottom): chasing, merging, exchange, fragmentation-chasing, and fragmentation-exchange

Sand dunes do not only capture attention for their beautiful natural formations—scientists also have an interest in the way they behave, which often defies intuition. Over a long period of time, for example, strong winds can make dunes taller rather than wearing them down as one might expect. To learn more about how these shifting sand banks move and interact with each other, Erick Franklin, a mechanical engineer from the University of Campinas (UNICAMP), created a small device that reproduces the natural dynamics of certain dune types in the lab, identifying the properties of their movements and changes.

The artificial system consists of an acrylic channel that is 5 meters long, 16 centimeters (cm) wide, and 5 cm high. The Franklin deposited two piles of spherical glass or ceramic grains inside, precisely controlling their shape and weight. Each miniature dune comprised about 100,000 particles of the same distinct color, allowing their movements be to tracked. He and his colleagues then used high-resolution video cameras to record the grains as they were carried by a stream of water of adjustable speed and analyzed the video in slow motion with the aid of computer software.

Using this strategy, the group mapped the migration patterns of the grains between the two barchans—crescent-shaped dunes common in deserts, at the bottom of rivers and oceans, and even on the surface of other planets, like Mars—and identified five types of interaction. In another experiment, the researchers verified that the movement of the liquid, in this case water, is capable of separating differently sized grains initially mixed together and creating stratified barchans, which could influence our interpretation of geological findings. In stratified dunes, each layer is formed by grains of the same size that differ to those found in the other layers.

Franklin, who specializes in fluid mechanics and the transportation of granular materials, began installing an artificial dune system in his UNICAMP laboratory in 2012. He is fascinated by the shapes these moving sand mounds form in nature and wanted to understand how they change over time, something that is difficult to track directly in nature.

Aeolian dunes sculpted by the wind, like those found in Lençóis Maranhenses and the Sahara desert, take dozens of years to form and move. They have only been regularly monitored by aerial and satellite images for the last two or three decades. On Mars, where the air is thinner, barchans can take millennia to form and researchers have to use computer simulations to estimate how they behave. Even under special laboratory conditions, such as a wind tunnel, a barchan would take at least a year to form.

In nature, dunes sculpted by the wind take dozens of years to form and move

Faced with these limitations and based on the established principle that dunes are created when a granular material is transported by a fluid (water in aquatic environments and wind on land), Franklin decided to study underwater dunes—which naturally evolve extremely quickly—under controlled conditions in his lab. Smaller than aeolian barchans, which can reach tens of meters high, underwater barchans are no more than 10 cm and can emerge and move in a matter of minutes. In nature, both in water and on land, they collide, merge, and overlap, forming dune corridors. “What changes are the scales of size and time,” says the scientist, who believes the key physical mechanisms that govern the formation of dunes on land and under water are very similar.

Franklin and mechanical engineering PhD student William Righi Assis carried out about 150 experiments using the simplest possible composition—two piles of grains in the water channel. They varied the initial size of the dunes, their positions at the beginning of the tests, the water velocity, and the characteristics of each grain (diameter, density, and roundness). In an article published in Geophysical Research Letters in September 2020, they described the five main ways that barchans interact: chasing, merging, exchange, fragmentation-chasing, and fragmentation-exchange.

Based on the results of the experiments, Franklin and Assis drew a map that allowed them to estimate the type of interaction that would occur between two barchans based on the initial conditions. According to the researchers, it could theoretically be applied to dunes of any size and any time scale. “The map makes it possible to estimate how barchans on Earth or Mars might interact,” says Franklin. He hopes their conclusions will be useful in the development of more sophisticated dune evolution models, which could help combat the advancing desertification process and preserve sand dunes threatened by human activity.

In experiments described in the journal JGR Earth Surface in July 2021, Assisi and Franklin repeated the barchan tests using grains with a different color scheme. They used a mixture of white and black grains (97% of the former, 3% of the latter) in each dune and monitored the individual movements of the black grains. By conducting a statistical analysis of the trajectories, the scientists deduced the displacement of the others and thus determined how many grains join or depart from each dune in each of the different interaction types. Together with the “interaction map,” these data can help scientists to roughly estimate the amount of sand exchanged between wind dunes on Earth or Mars. 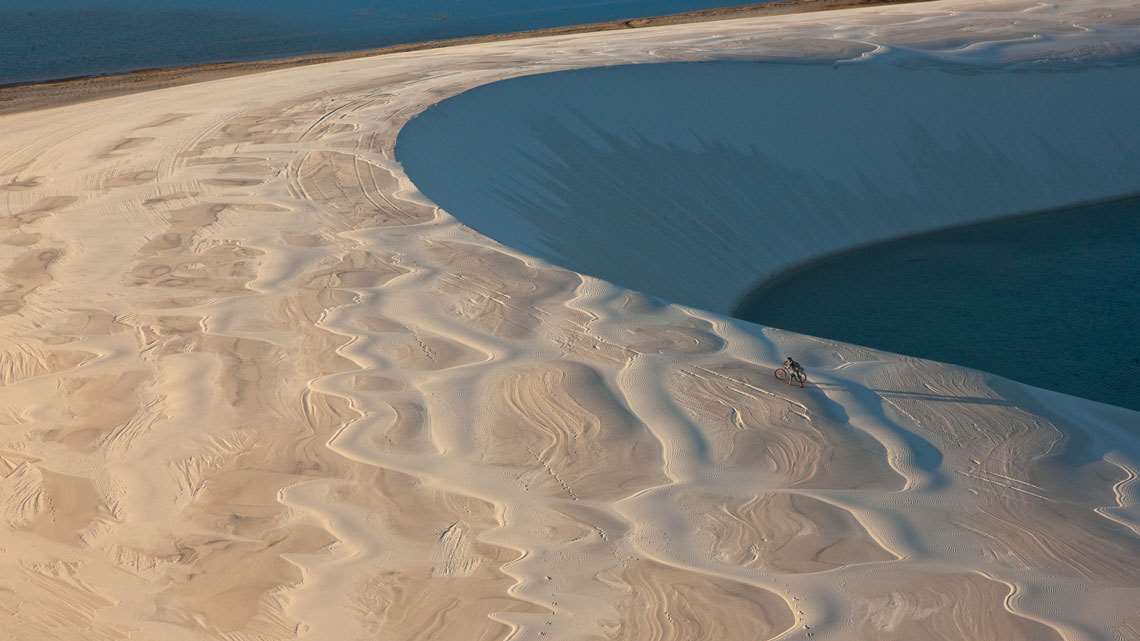 Natural dunes, such as those in Lençóis Maranhenses, can take the form of interconnected barchansGeorge Steinmetz / Getty Images

“The UNICAMP group is doing a great job of measuring underwater dunes in detail, deciphering mass transfers at a granular level,” says Hans Herrmann, a physicist from the Federal University of Ceará (UFC) who specializes in computational modeling of dunes. He disagrees, however, that the five types of interaction observed in underwater barchans can be applied to aeolian dunes. In Herrmann’s opinion, the differences between the properties of the fluid that moves the grains (water or air) must not be ignored. In water, the grains generally roll along the ground, while on land they primarily move via long-distance jumps through the air, according to the physicist. He also argues that the ratio between grain size and dune size is smaller in water than on land, which could affect the way aeolian dunes evolve over time.

“Not everything observed for underwater dunes can be applied to aeolian dunes,” says Eric Parteli, a physicist from the University of Duisburg-Essen, Germany, who uses geomorphological models to help combat desertification. He notes, however, that the behavior of underwater dunes could be useful when investigating how changes in flow direction affect dune shapes. “If the experiments by the CAMPINAS group incorporated changes in flow direction, they could help answer questions about dunes on Mars,” he says.

Since most experiments and computer simulations assume that the dunes are composed of a single type of grain (an “average” grain), Franklin and two other doctoral students, Ecuadorians Carlos Alvarez and Fernando Cúñez, decided to explore what might occur under more natural conditions. They repeated the tests with grains of two different sizes and densities mixed together.

The results, presented in the journal Physics of Fluids in May 2021, showed that the flowing water separates the grains and creates stratified barchans. Contrary to expectations, the heavier grains tend to end up on top of the lighter ones, something that had not yet been observed in the lab. Franklin speculates that this separation process serves as an additional explanation (in addition to other existing theories) for the formation of stratified dunes seen at the North Pole on Mars.

The stratification could also be important to understanding the origin of sedimentary rocks formed from the burial of dune fields that existed hundreds of thousands of years ago. “Different types of dunes leave distinct geometric stratification patterns,” explains Paulo Giannini, a geologist from the Institute of Geosciences (IGC) at the University of São Paulo (USP). “By measuring the slope of the strata, it is possible to infer where an ancient dune moved, and consequently, the path taken by the wind or water in the past.”