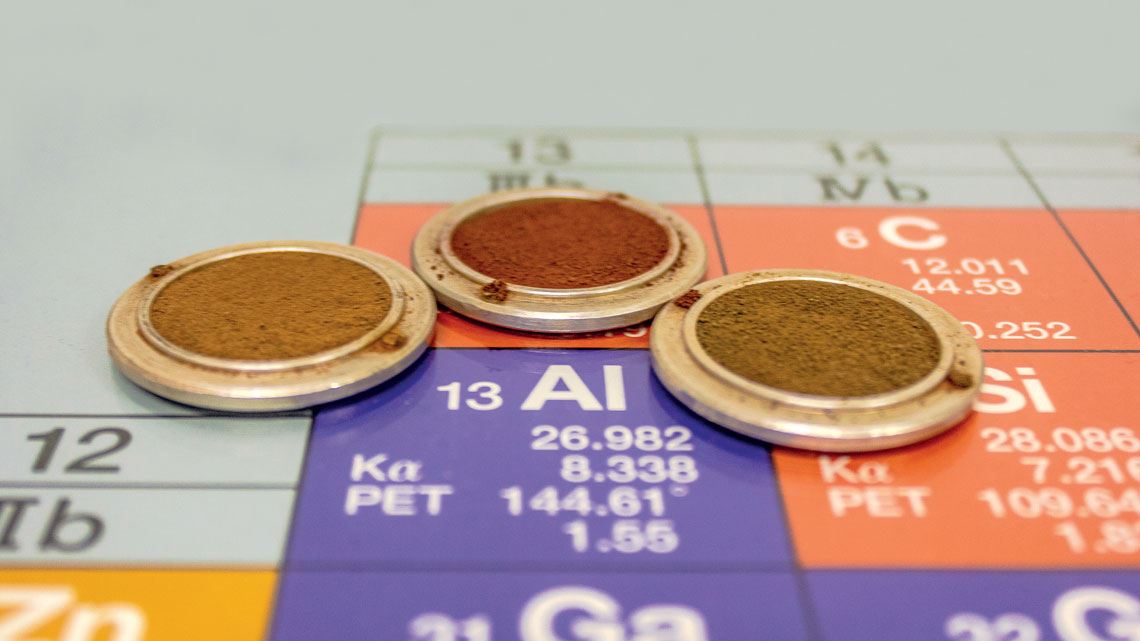 A new mineral mapping technique could help to significantly improve farming practices in tropical climates. The technique, developed by researchers at the Jaboticabal, São Paulo, campus of the School of Crop and Veterinary Sciences at São Paulo State University (UNESP), Brazil, uses magnetic sensing to determine the agronomic and environmental characteristics of the soil. The information collected by this method can tell farmers what areas are ideal for different cultivars and the quantities of fertilizers, soil amendments, and herbicides needed in each field, helping to reduce expenses on farm inputs as well as environmental impacts from farming.

“Soils are not all alike. Even small, adjacent portions of land can have very different physical, chemical, biological, and mineral properties,” explains crop scientist José Marques Júnior, who is leading the Soil Characterization for Precision Farming (CSME) research group at UNESP, where the new technique was developed. Topsoil, he elaborates, contains water, air, organic matter and minerals, with the latter accounting for approximately 45% of soil composition.

Mineralogy is concerned with the nanometric fractions of the soil—those with mineral particles smaller than 0.002 millimeters (mm), commonly known as clays. In agriculture, mineralogical techniques can be used to determine the soil’s ability to hold water and provide plant-available nutrients such as phosphorus, nitrogen, potassium, and calcium. The CSME researchers draw an analogy between the mineral characterization of soils and the sequencing of a person’s DNA. 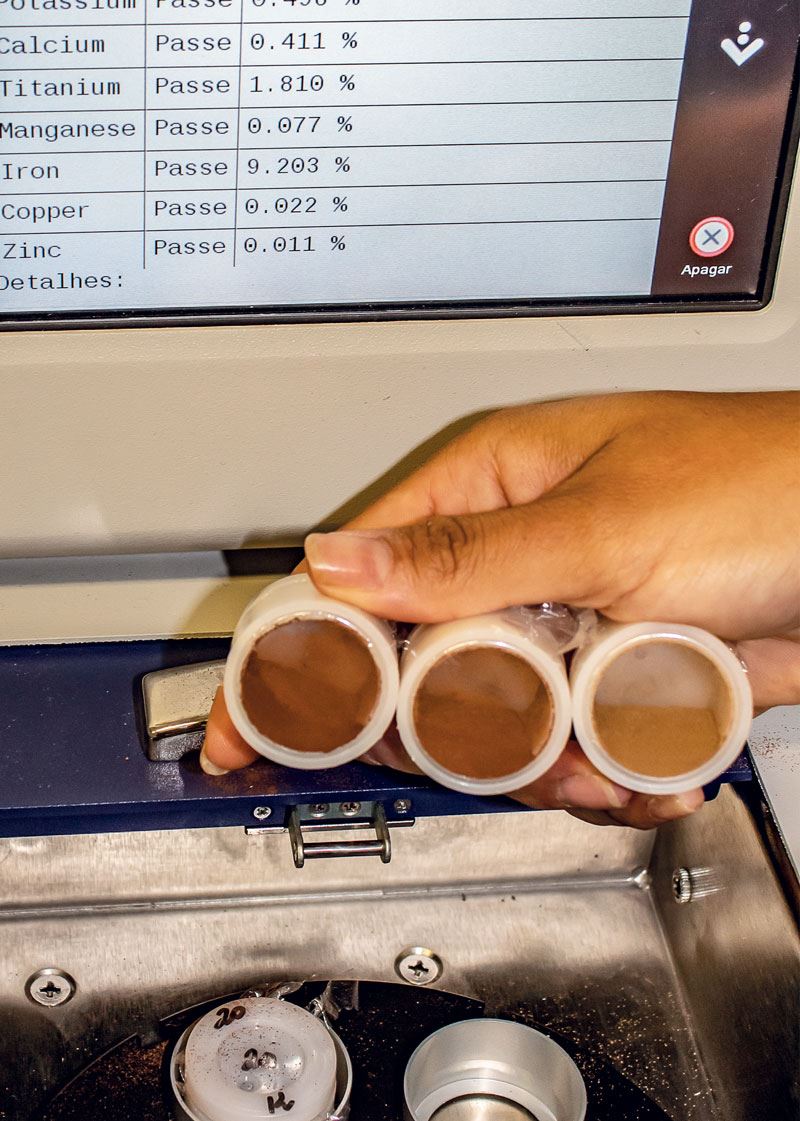 “Just as DNA determines the characteristics of humans and other species, different types of minerals affect the agronomic and environmental characteristics of soils in different ways,” says crop scientist Diego Silva Siqueira, who completed his master’s and doctorate degrees as a member of the CSME research group under the supervision of Marques Júnior. “We provide farmers with what can be thought of as a genetic map of their cropland, which they can use to inform crop management decisions.” CSME’s mapping process collects information about magnetic minerals that make up the soil. Any variation in the soil’s magnetic signature, explains Siqueira, denotes a variation in these minerals and, consequently, in the soil’s agricultural and environmental properties.

“The technique is suited for tropical and subtropical soils, which are abundant in iron oxides, aluminum and other minerals with strong magnetic fields that act as a sort of nano magnet. But it is not as well suited for temperate climates, where soils have a smaller concentration of these magnetic minerals and a larger amount of silicate clays,” says Marques Júnior. Used for decades in the mining and chemicals industries, by coatings manufacturers, and in materials engineering, magnetic sensing techniques are now being repurposed for use in large-scale agriculture. The solution developed at CSME has been adopted by coffee growers in Minas Gerais and sugarcane farms in São Paulo.

In September 2019, Siqueira and two other crop scientists—Renan Gravena and Gustavo Pollo, a CSME alumnus—joined up to found Quanticum, a startup that provides magnetic mapping services for agricultural applications. They received funding from FAPESP’s Research for Innovation in Small Businesses (RISB, or PIPE in the Portuguese acronym) program for a study on magnetic mapping in tropical coffee farming. “Brazil produces a third of the world’s coffee, but it has yet to fully harness its potential in the market for premium coffee beans,” says Siqueira.

Magnetic mapping has attracted interest from Federação dos Cafeicultores do Cerrado Mineiro, a trade association representing around 4,500 coffee farmers in Minas Gerais. “Over the years we have greatly improved our knowledge of the elements that determine a coffee’s terroir, such as climate, altitude, and water regime. Magnetic mapping will provide better insight into soil properties, which is crucial in coffee growing,” says Juliano Tarabal, the association’s chief officer. Terroir describes the set of regional characteristics that give a coffee its distinctive character. “Coffee from a premium terroir can sell for as much as R$100 per kilo in a supermarket, about eight times the price of a conventional coffee brand,” says Tarabal.

Magnetic mapping, he explains, is used to determine the soil properties in each field. When establishing new crops, coffee growers can use this information to choose the variety best suited for each portion of land. “We can now give buyers assurance of the precise properties and origin of the coffee beans we deliver,” he says. A first-time coffee grower in the municipality of Patrocínio, Minas Gerais, has recently introduced the technique on his farm. Coffee is a biennial crop and it will take at least two harvest seasons to adequately assess the outcomes from the experiment. 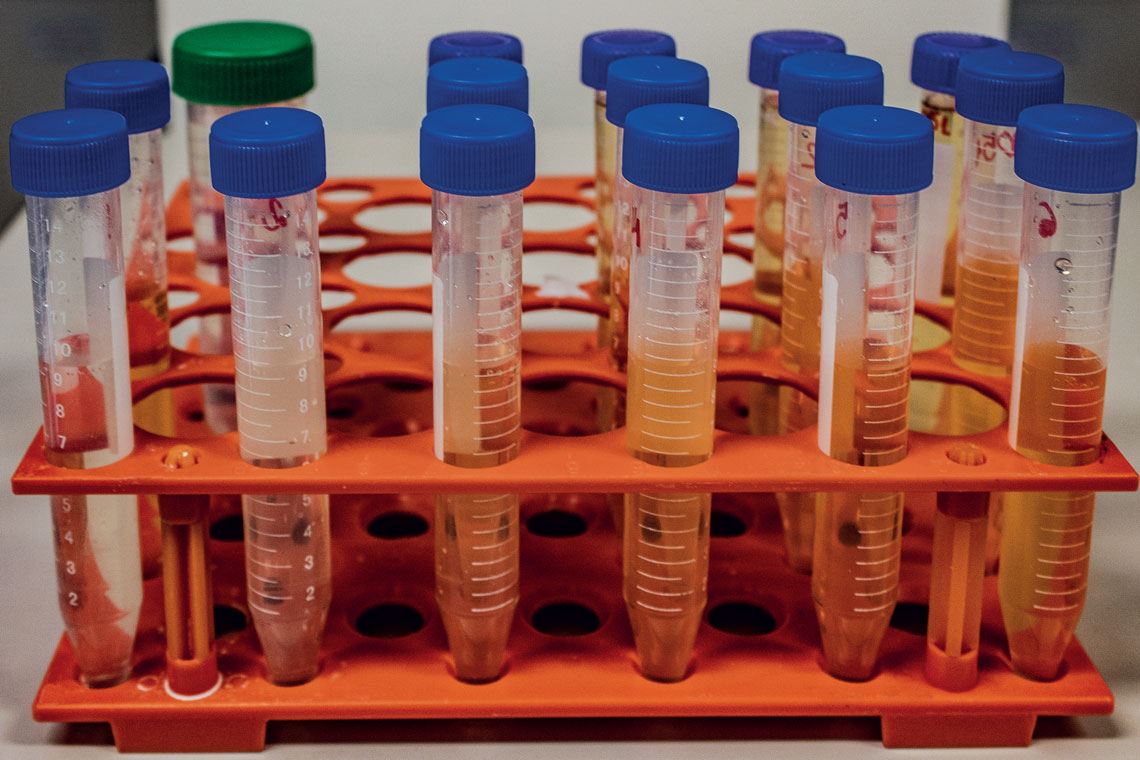 Three members of Cooxupé, the world’s largest coffee cooperative, with 15,800 member farms in the states of Minas Gerais and São Paulo, are currently experimenting with the technique. Mário Ferraz de Araújo, the cooperative’s technical development manager, believes magnetic mapping will help farmers to more precisely apply fertilizers and herbicides depending on each field’s needs.

Total production costs per hectare (ha) for Arabica coffee are currently in the range of R$8,500 to R$10,000, says Araújo. Of this amount, around R$4,000 is spent on fertilizers and soil amendments. “Using these inputs more effectively could significantly improve a farm’s financial performance,” he explains. “Each hectare yields around 30 coffee bags and revenues of about R$15,000 in a good year, or R$10,000 in a bad one. So fertilizers consume 40% of farmers’ revenues,” he notes.

Mineral characterization reduces the requirement for particle size analysis, which indicates the relative content of sand, clay, and silt (mineral fragments of a size between sand and clay), and for chemical analysis, which measures acidity and the availability of nutrients. “Soil mapping can also show which areas are heterogeneous and require more sampling for chemical analysis, reducing the required number of samples,” says crop scientist Alberto Vasconcellos Inda, coordinator of the Graduate Program in Soil Science at the Federal University of Rio Grande do Sul (UFRGS). 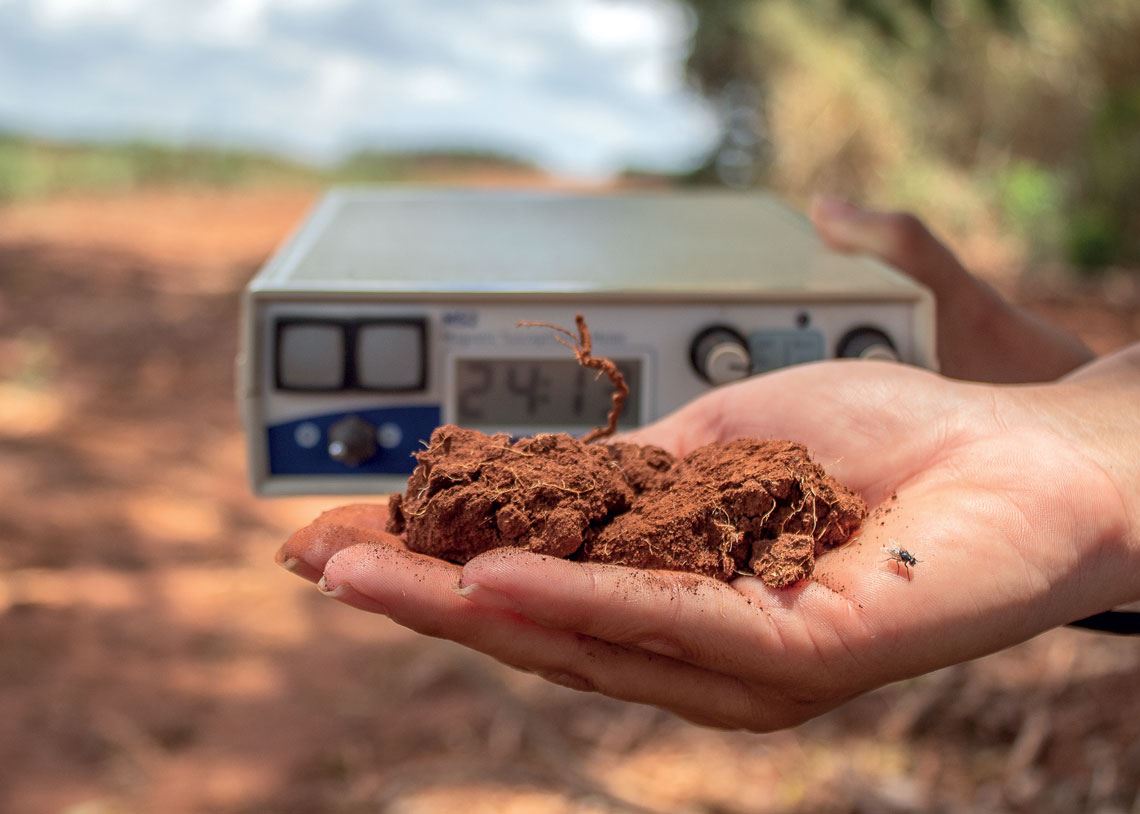 Magnetic mapping can also be used to supplement chemical and physical analyses, supporting a more accurate assessment of nutrient requirements when fertilizing a given field. “The higher the quality of the data, the lower the risk of inputs being applied improperly. Excessive use of soil nutrients, such as nitrogen, can be harmful to groundwater and surface water,” says Inda.

Soil characterization was first introduced in the nineteenth century. The most widely used method, X-ray diffraction (XRD), earned German physicist Max von Laue (1879–1960) the Nobel Prize in Physics in 1914. XRD has an accuracy of 95%, and is considered by mineralogists to be the gold standard in analytical chemistry. Other characterization methods include Mössbauer spectroscopy, which uses gamma radiation; differential thermal analysis (DTA); and thermal gravimetric analysis (TGA).

These four techniques all have an accuracy greater than 85%. But they all have three drawbacks in common: they are expensive, time consuming, and require highly skilled professionals to operate the equipment. These downsides, says Alberto Inda, have prevented these technologies from being mainstreamed in tropical and subtropical agriculture.

Each X-ray diffraction test analyzes a single mineral at an average cost of R$300 per test, according to market research done by Quanticum. A typical soil sample in Brazil contains more than 10 minerals that, even when present in small quantities, affect the soil’s agronomic properties. Using conventional methods, says Siqueira, a report showing the types and quantities of minerals at a single sampling point would cost more than R$2,000. A survey of 1,000 ha of cropland, assuming one sample is collected per hectare, would cost a minimum of R$2 million. 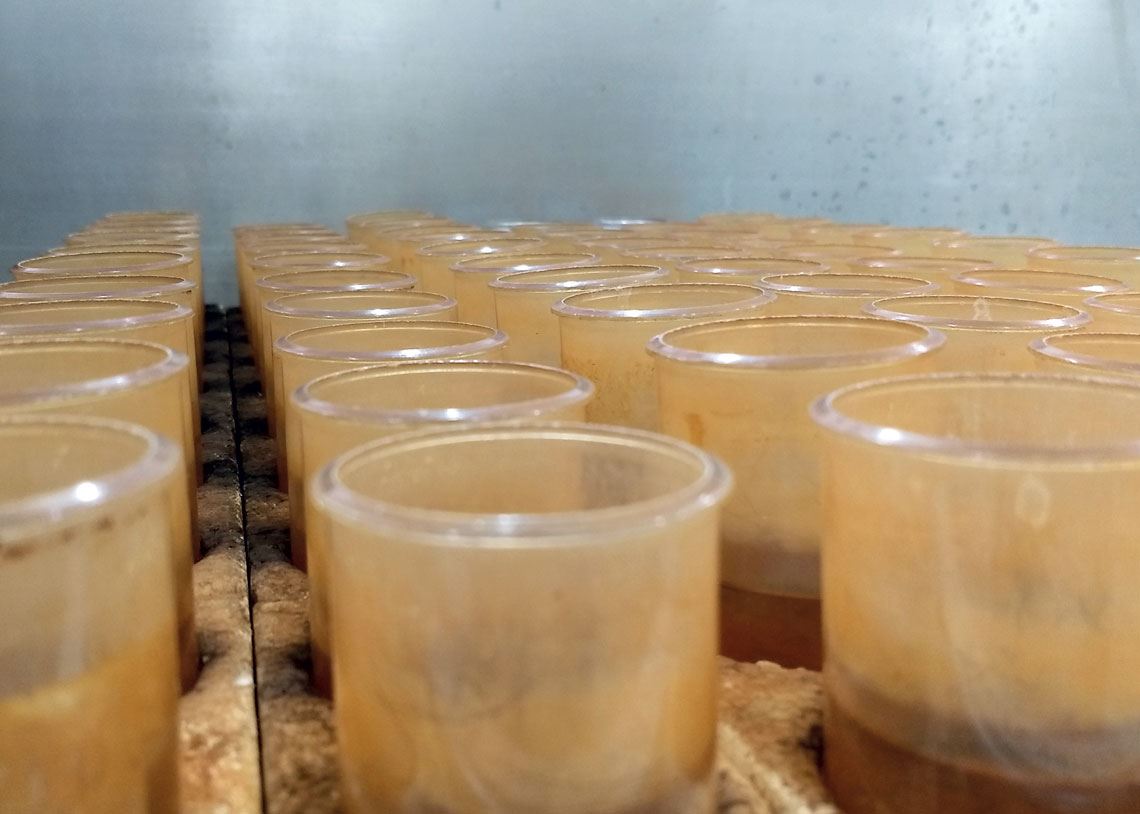 Quanticum takes minerals readings using magnetic susceptibility sensors. A single reading covers all the main minerals present in the sample. The resulting report costs between R$5 and R$30 per ha, depending on the level of detail and other features, such as fertilization recommendations. “Compared to the gold-standard methods, the resulting data is 15% to 20% less accurate, but a great deal cheaper for farmers,” says Diego Siqueira.

Ideally, a magnetic mapping survey should be repeated in the following years, but with fewer samples—around 40% fewer than in the first sampling program. After this initial follow-up program, spot analyses can be performed ad hoc, such as for a field where a new cultivar will be planted or which has undergone significant compaction.

São Martinho, one of the largest sugar cane producers and processors in the world, has pioneered the use of this technique in managing sugarcane crops—all 80,000 ha of sugarcane fields in its Pradópolis operation in São Paulo have now been mapped. The mapping work was conducted by a team of employees who had graduated from the FCAV-UNESP campus in Jaboticabal and were members of the CSME research group.

Luís Gustavo Teixeira, agricultural manager at São Martinho, says magnetic mapping provides detailed information about the soil that supports more effective soil management and more efficient use of inputs. This improves not only yields but also the environmental sustainability of farm operations. Magnetic sensing can be used for more than just soil characterization. São Martinho has also employed the technique to assess soil susceptibility to compaction and inform crop management decisions. 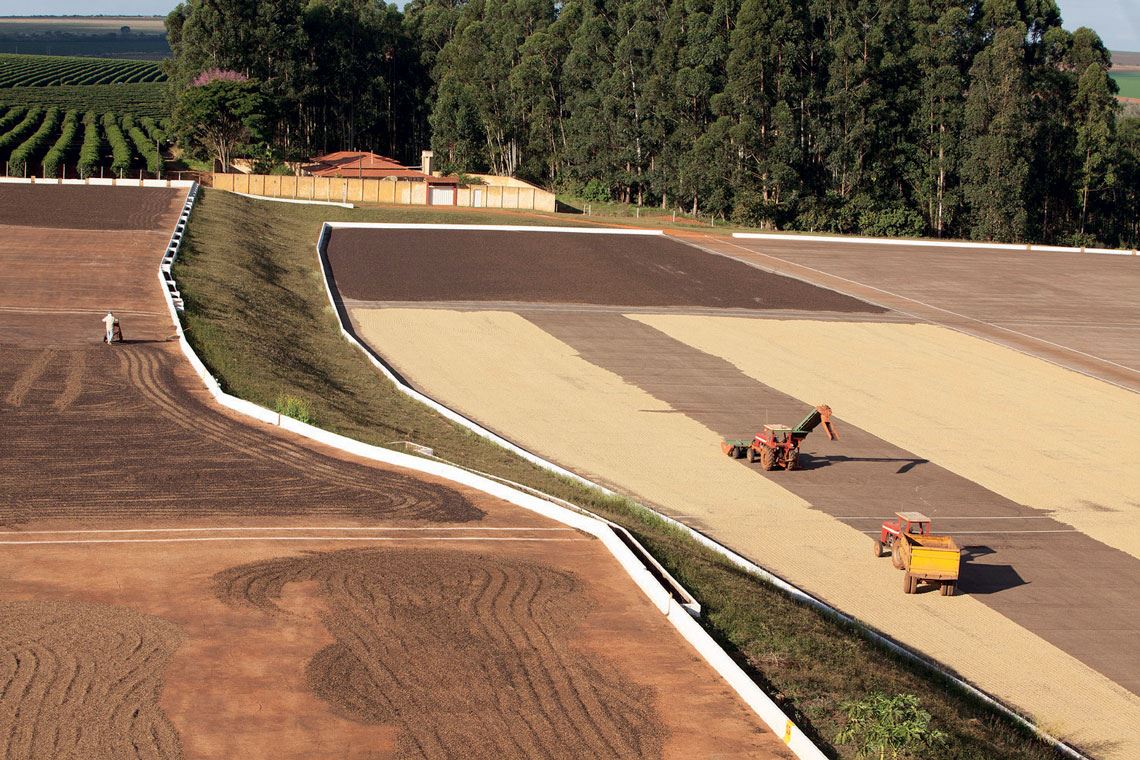 Coffee beans drying in the sun on a farm property in Minas Gerais, where some farmers are experimenting with mineral mapping in coffee growingFederação dos Cafeicultores do Cerrado

Soils can be compacted both by natural processes, such as raindrop impact, and by human action, such as wheel traffic, explains Teixeira. Compacted soil affects plant development and ultimately crop yields, and needs to be occasionally broken up using subsoilers, which normally operate at a fixed depth. Magnetic sensing can be used to detect the depth of the compacted layer. “Accurate information improves efficiency, reduces operating costs—such as through fuel savings—and enhances soil conservation,” says Teixeira.

Citing data from the United Nations Food and Agriculture Organization (FAO), José Marques Júnior notes that, worldwide, the impacts from poor soil management are estimated to cost around US$70 per person per year. He believes these impacts could the substantially reduced if detailed data were available on soil conditions.

The FAO also estimates that global agriculture production will have to be increased by about 70% percent to adequately feed a population of almost 9.8 billion people in 2050, with Brazil expected to account for 40% of the added production. Marques Júnior is confident Brazil can achieve this without having to clear new land in the Amazon, the Pantanal, or the Atlantic Forest. “Today we have more than 100 million hectares of cropland that has been abandoned because of an inadequate knowledge of the soil,” he says.