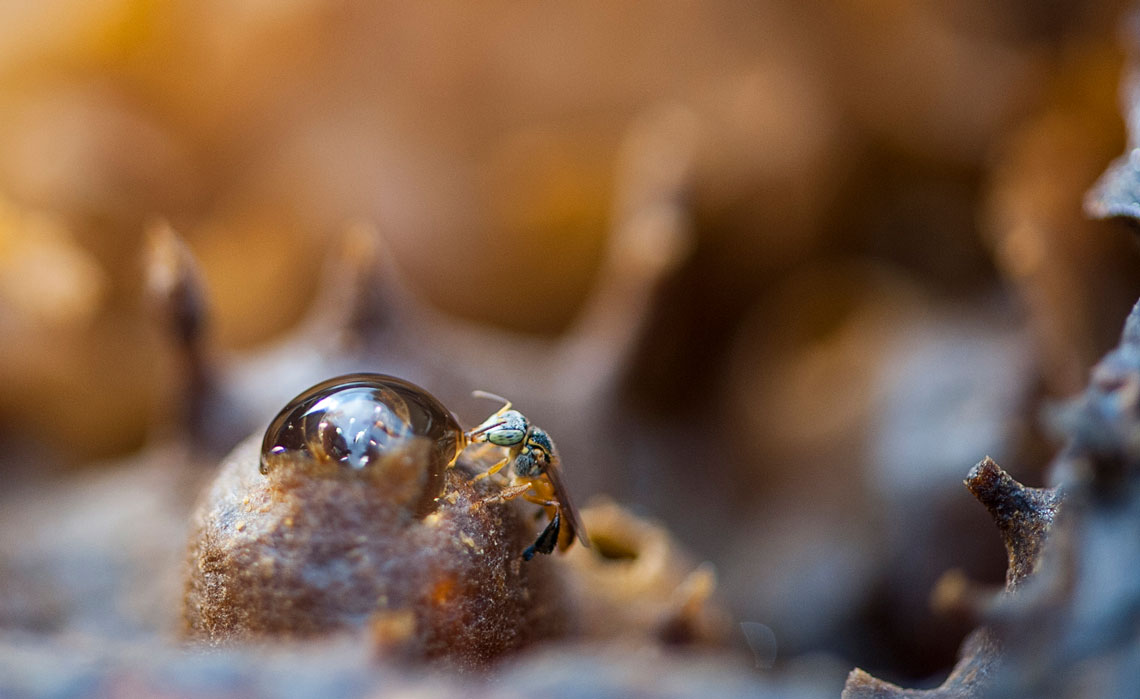 Jataí in a beehive with honey cultivated at EMBRAPA in Jaguariúna

Borá (Tetragona clavipes), a dark-brown-bodied stingless bee 10 millimeters (mm) in length, produces honey that exudes an aroma of cheese. The uruçu-amarela from the Amazon (Melipona flavolineata) produces honey with a sourish taste, like lemon. The honey from uruçu-cinzenta (Melipona fasciculata), with a black and gray abdomen, and jataí (Tetragonisca angustula), 4 to 5 mm in length, is sweeter.

The diversity of colors, aromas, and tastes increases the culinary uses of honey from native bees, also known as stingless bees (in reality, the stinger is stunted), but on the other hand, complicates the definition of parameters for the quality and identity of each type. With help from researchers, state governments are creating legislations to remedy shortcomings in federal laws and promote meliponiculture—stingless bee keeping—regulated in 2004 and updated in 2020.

The only federal regulation in place about honey from bees, approved in 2000, uses honey from Apis Mellifera, a hybrid species of foreign origin predominant in Brazil also known as Africanized bees, as a parameter of quality and identity. “It’s not an ideal model, because of the differences in the composition between the honeys,” states biologist Cristiano Menezes, from the Brazilian Agricultural Research Corporation (EMBRAPA). He is one of the authors of an article published in 2021 in the scientific journal Apidologie, which highlights these differences.

In this study, the honeys from native bees surpass the limits of several quality parameters, especially humidity and acidity levels, adopted by the Brazilian legislation for Apis. Of the 106 samples used to define the physical-chemical composition of the stingless bee honeys analyzed in other studies, 82 presented a level of humidity above the 20% limit set in Brazilian legislation. Due to naturally having more water than that of the Africanized bee, native bee honey can have between 18% and 40% humidity. Additionally, 30% of the samples had free acidity values above that set by the federal legislation. “The acidity level indicates fermentation. In Apis honey, which is more stable, it makes sense because it can indicate premature collection, but native honeys, due to having more water, ferment naturally in the colonies,” says Menezes. In his analysis, the acidity index varies between 17 milliequivalents per kilogram (mEq/kg) of mandaçaia (Melipona quadrifasciata) honey, and 143 mEq/kg of Amazonian uruçu-amarela honey. The limit established in the national legislation is 50 mEq/kg.

In recent years, some states have approved their own technical regulations regarding identity and quality for native bee honey. The state of Amazonas has increased the acidity limit to 80 mEq/kg, however, in the analysis by Menezes, some samples exceeded this value. The regulation for São Paulo raised the humidity level for natural honey to 40% but kept the standard of 50 mEq/kg for acidity. 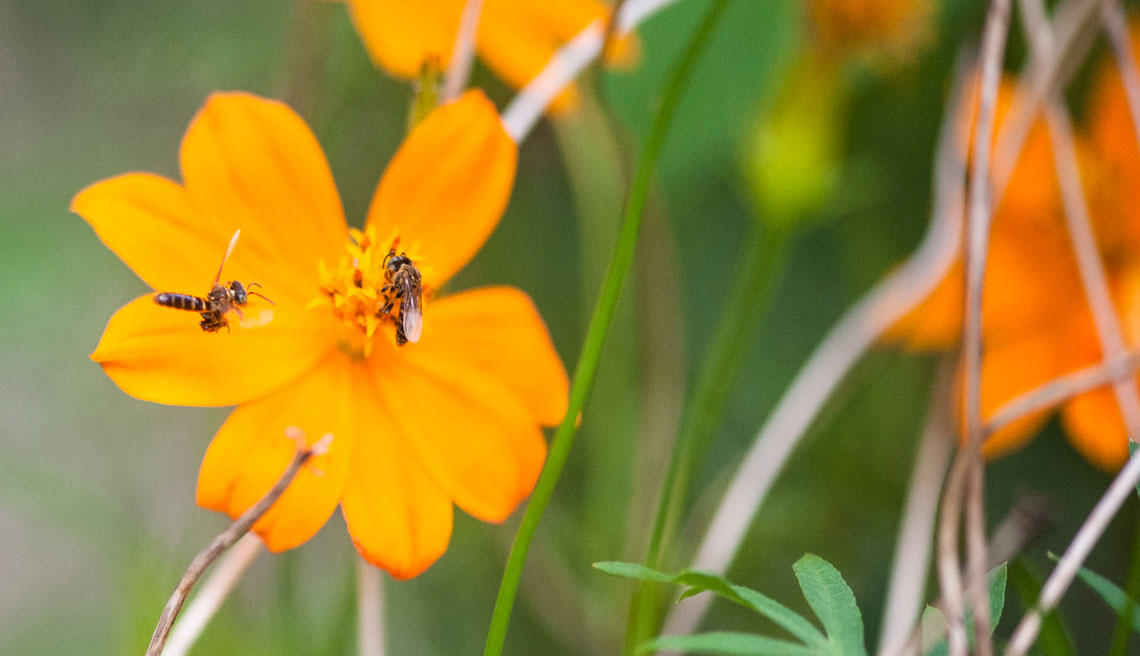 “With the main guidelines established and a technical standard approved, details such as acidity can be changed later, with scientific justification,” assesses biologist Ricardo Camargo, researcher at EMBRAPA and coauthor of an article published in the Brazilian Journal of Food Technology in 2017 from which the creation of the technical standard for São Paulo was founded. “The important thing is that it discovered that the acidity index for native bees can be higher than for Apis. The next stage is to recognize the tolerable minimum and maximum levels for the main parameters, such as humidity and acidity.”

From 2007 to 2021, Camargo was a technical consultant for the Sectorial Chamber of the Honey and Bee Product Production Chain of the Brazilian Ministry of Agriculture, Livestock and Food Supply (MAPA). “In 2019, the chamber proposed the production of a national technical standard to MAPA, taking the one from São Paulo as a model,” he says. According to the minutes of the last sectorial chamber meeting, from June 2021, the topic was still in discussion. “After honey, it will be necessary to make technical standards for propolis, cerumen [pots where the native bees store the honey], and other products from stingless bees.” Menezes adds: “Cerumen adds quality to the honey, like the oak barrel does for wine.”

Ecologist Jerônimo Villas-Bôas, native beekeeper and author of a technical manual about full use of stingless bee products, comments that the lack of national parameters and standardization between state legislations complicates the sale of honey outside the region it was produced. “If the states are creating their standards, the federal government could also do it,” he affirms. Villas-Bôas took part in drafting the technical standard for Pará, published in November 2021 by the Pará Agricultural Defense Agency (ADEPARÁ). In this state, according to the agency, breeding of stingless bees is 30 times higher than that of Apis.

Among the 250 species of native bees described in Brazil, around 60 are today used to produce honey. The variety of flavors, colors, and aromas results from the production method: native bees store the honey in pots made from a mixture of wax and propolis, which is slowly absorbed by the honey, whereas Apis store their honey in honeycomb made from pure wax. Depending on the species, a colony of stingless bees such as uruçu-cinzenta produces an average of 4 kg per year, costing an average of R$120 per kilogram, whereas Apis produce 30 kg per year, with an average price of R$30 per kilogram.

Practiced for hundreds of years by the native peoples of Brazil, meliponiculture is a predominantly artisanal activity. “The registration of producers in the official agencies is still low, which complicates more detailed knowledge of the market,” says economist Ana Assad, executive director of the Brazilian Association of Bee Studies (ABELHA). “In practice, each state regulates its registration and registers stingless bee keepers,” observes Camargo, who also belongs to the Association of Native Stingless Beekeepers of the State of São Paulo (AMESAMPA). According to him, there are between 4,000 and 5,000 stingless beekeepers in the state.

To encourage this area, EMBRAPA, in partnership with ABELHA, promotes courses—one of which, online, attracted 45,000 people at the start of the pandemic, and another about urban meliponiculture, around 10,000. In November 2021, in the Catálogo nacional das abelhas nativas sem-ferrão (National catalog of native stingless bees), the Chico Mendes Institute for Biodiversity Conservation (ICMBio) presented the natural areas of occurrence of 95 species of this group and stressed that each one should be kept in its own region.