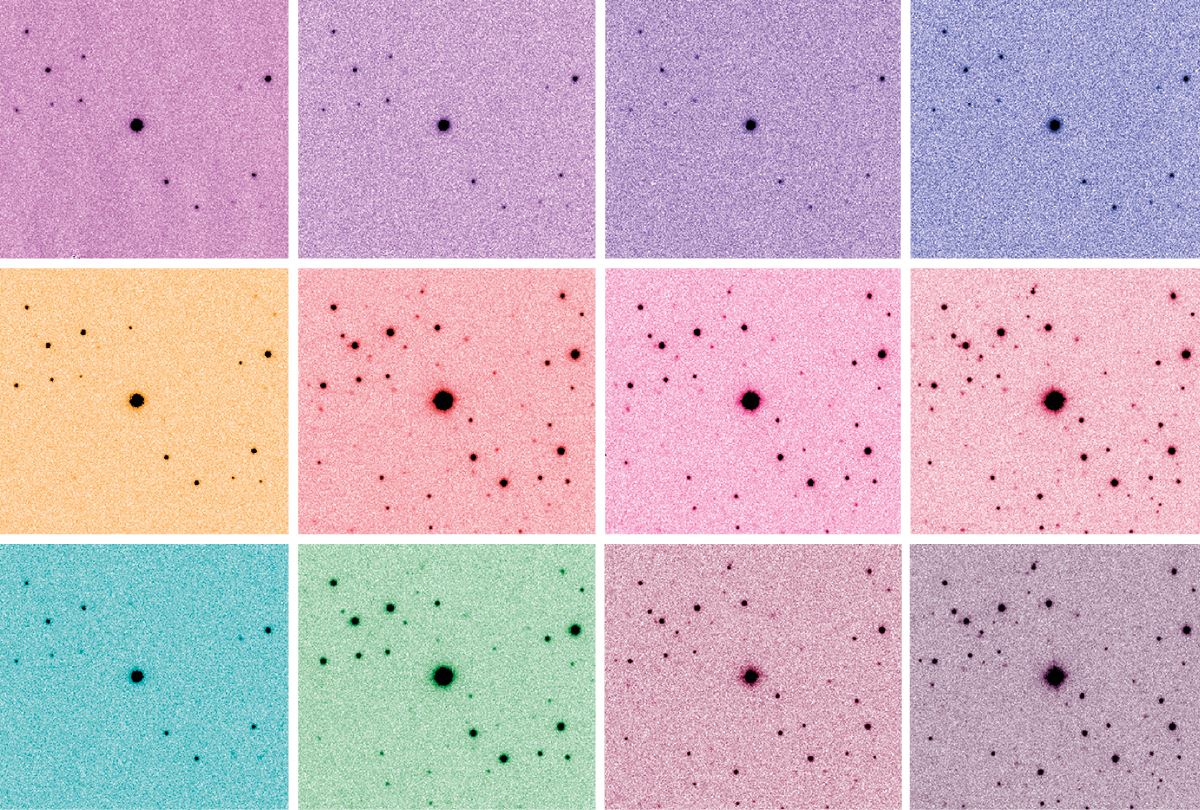 Among 21 million astronomical objects observed and cataloged by the S-PLUS project, a survey using a Brazilian telescope located in Chile to map half of the sky over the southern hemisphere, a team led by astrophysicist Vinicius Placco identified a very old and rare star. With about 80% of the mass of the Sun and estimated at between 12 and 10 billion years old, SPLUS J2104-0049—the name given to the newly discovered star—seems to belong to the second generation of stars that formed after the Big Bang, which gave birth to the Universe 13.8 billion years ago. Because the first stars formed after the Big Bang have never been observed, the chemical composition of second-generation stars can help scientists make inferences about their predecessors. The work has been likened to stellar archeology, with the location and characterization of an artifact providing clues about the distant past.

The existence of SPLUS J2104-0049 suggests that the earliest stars in the Universe, which began to appear around 200 million years after the Big Bang, may have more often been massive than previously thought. “The star we discovered was formed by a cloud of gas enriched by matter from the explosion of a single first-generation star with 30 solar masses,” explains Placco, from NOIRLab, a research center in Tucson, Arizona, run by the USA’s National Science Foundation (NSF). “Until now, the theory was that first-generation stars had around 20 solar masses.” The Brazilian astrophysicist is the lead author of an article on the star’s discovery published in Astrophysical Journal Letters (ApJL) in May.

Some 16,000 light-years from Earth, which is about 3,800 times farther than Proxima Centauri, the closest star to our planet, SPLUS J2104-0049 is technically defined as an ultra-metal-poor star. There are only 35 known stars in this group, all from the second generation of stars to emerge after the Big Bang. In astrophysics, any chemical element other than hydrogen and helium is considered a metal, a concept specific to the field that differs from the periodic table used in chemistry. In addition to its extremely low metal content, SPLUS J2104-0049 has a characteristic that makes it unique among the ultra-metal-poor stars: it has the lowest amount of carbon in its atmosphere. “It has between 100 and 1,000 times less carbon than the other stars in this group,” says Placco. According to the astrophysicists’ models, a star of this particular nature could only emerge from a gaseous cloud enriched by the matter of a star from a previous generation with a mass equivalent to 30 suns. 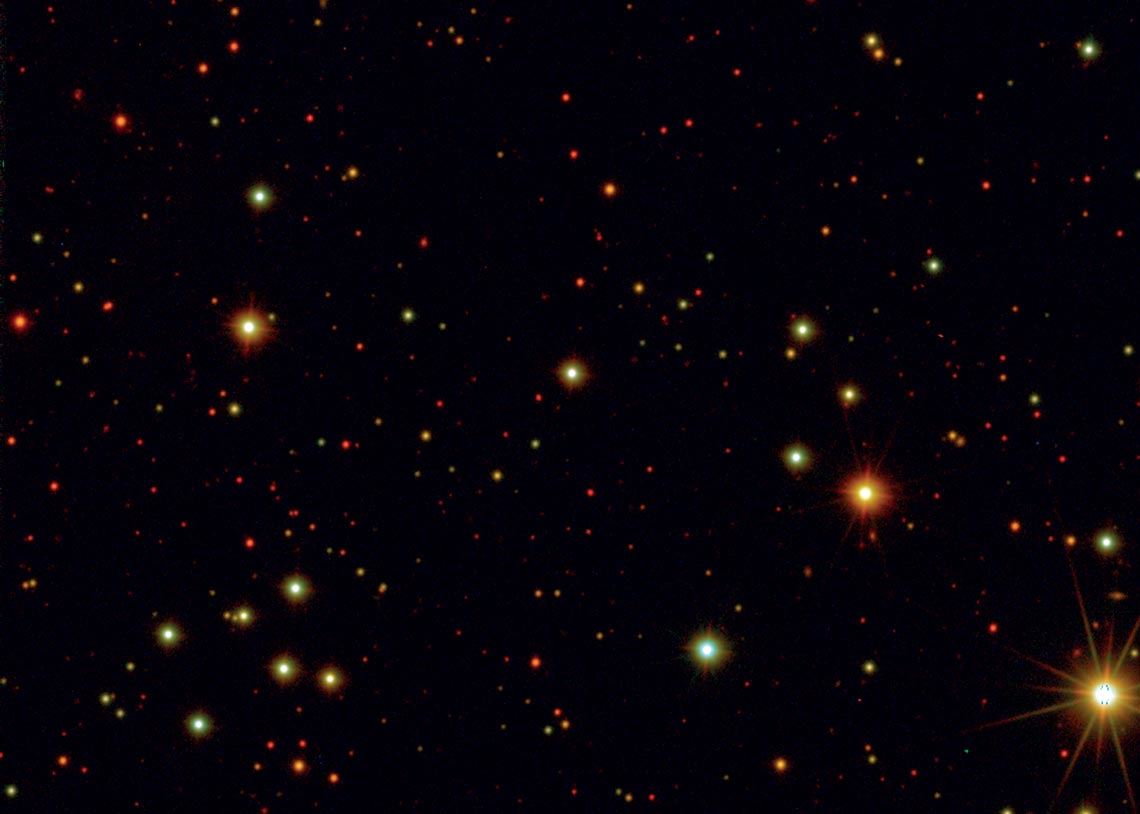 The composition of a star is derived from the chemical makeup of the stars that preceded it. In theory, the older a star is—the closer to the beginning of the universe it was formed—the lower its metallicity. The first generation of stars, formed shortly after the Big Bang, represent the most extreme case that sets the standard for this rule. These primordial stars are composed only of hydrogen and helium, the two lightest chemical elements, and are totally devoid of metals. They have this unique chemical signature because they were formed from the gravitational collapse of nebulae made up only of hydrogen and helium. These clouds of gas grew denser and denser until they formed the first generation of stars. All subsequent populations of stars were composed primarily of these two elements but with a small amount of metal, the level of which increased slightly with each new generation of stars. The life and death of a star supplies the gas clouds with more metals, gradually increasing the quantity of elements in these stellar nurseries. Over time, stars contain more metals, as well as the hydrogen and helium.

Of the 700,000 stars in the Milky Way that were mapped and had their metallicity estimated by the S-PLUS project, SPLUS J2104-0049 was only located thanks to a peculiarity of the T80S, a telescope with an 86-centimeter diameter installed on Cerro Tololo mountain in the Chilean Andes in 2015 to capture the images used to survey the southern sky. The telescope uses a system of 12 different colored photometric filters, seven of which are narrower and allow the so-called spectral lines of celestial objects to be studied. The characteristics of these lines can indicate the temperature and chemical constitution of a star, even very old ones like SPLUS J2104-0049. “The T80S images are great for discovering rare objects to study,” says astrophysicist Felipe de Almeida Fernandes, who is on a postdoctoral fellowship at the Institute of Astronomy, Geophysics, and Atmospheric Sciences (IAG) of the University of São Paulo (USP) and is responsible for preparing and refining the data provided for the S-PLUS survey. “When you identify a potentially interesting object, you can look at it in more detail with a larger telescope.” 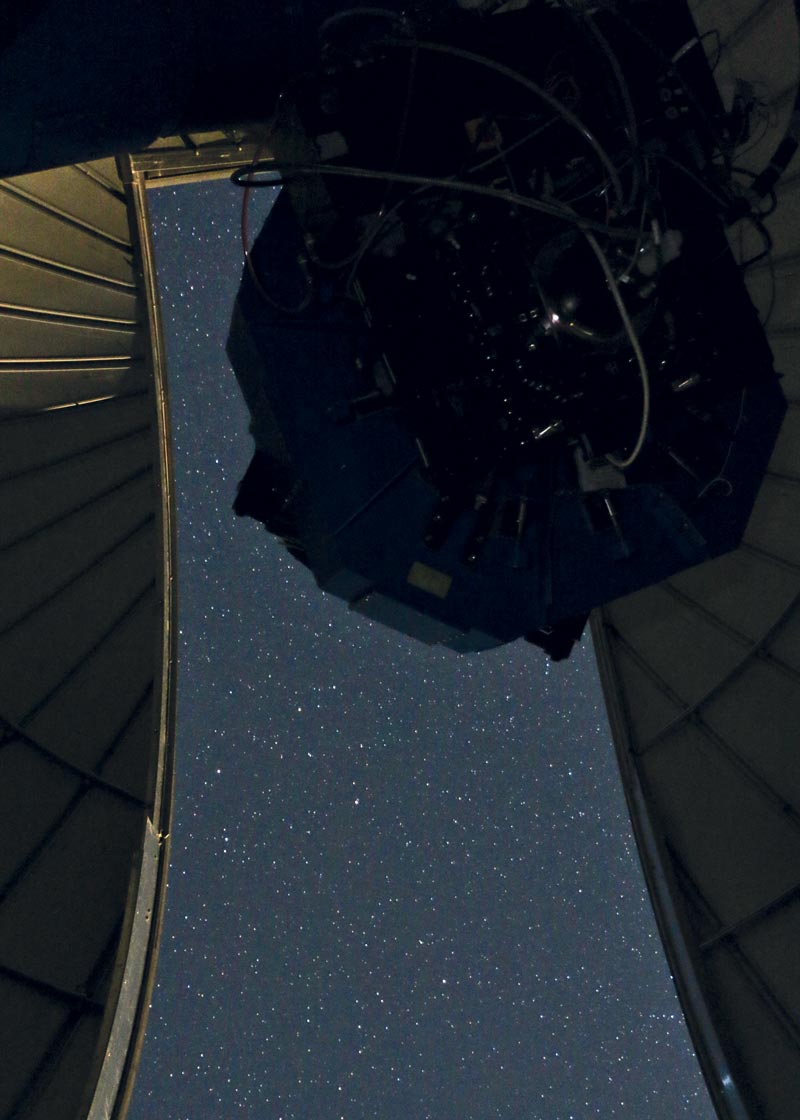 View of the dome and interior of the T80S telescope, located on the Cerro Tololo mountain in ChileFavio Feifer

The new ultra-metal-poor star was discovered by the T80S and studied further with two larger telescopes, the Gemini South, whose mirror is 8 meters (m) in diameter, and the 6.5 m Magellan Clay, both also located in Chile. To speed up the process of selecting targets for observation from thousands or even millions of astronomical bodies, astrophysicists now use algorithms based on artificial intelligence and machine learning. “We teach the software to recognize the typical spectral signature of the objects we are looking for, and it then searches for this type of star among the images from the S-PLUS survey,” explains Placco. This is how the astrophysicists initially narrowed down the 700,000 stars in the Milky Way observed by the survey so far to 200 potential ultra-metal-poor stars and later discovered SPLUS J2104-0049. According to the researchers, the algorithm’s success rate at classifying stars or celestial formations mapped by the survey is greater than 97%. For every thousand bodies automatically analyzed by the program, only 22 are incorrectly cataloged.

“The identification of this carbon-poor star is S-PLUS’s biggest scientific discovery so far,” says IAG astrophysicist Claudia Mendes de Oliveira, head of the project and designer of the T80S telescope. Alongside the scientific article describing the newly found star, the group has published five papers presenting the scientific methods and tools being used by S-PLUS. FAPESP provided €800,000 (about R$4.7 million) in funding to purchase the T80S as part of a project led by Oliveira. Installation of the telescope in Chile was also supported by other partner institutions: the National Observatory (ON) in Rio de Janeiro, the Federal University of Sergipe (UFS), the Federal University of Santa Catarina (UFSC), and the University of La Serena in Chile. Several funding agencies, including the Brazilian National Council for Scientific and Technological Development (CNPq) and the Rio de Janeiro State Research Foundation (FAPERJ), offered financial support to allow these institutions to participate in the research. Brazil’s National Institute for Space Research (INPE) and the Centro de Estudios de Física del Cosmos de Aragón (CEFCA) in Spain also funded operation of the T80S in the early stages of the project. Maintenance of the telescope is currently supported by projects funded by FAPESP.

An eye on half the southern sky
As part of the S-PLUS project, a Brazilian telescope is being used to map 4,500 regions of the celestial sphere

Three of the 21 million astronomical objects mapped by the survey (from right to left): the Pencil Nebula, galaxy NGC 3314A, and globular cluster Messier 2 (NGC 7089)S-PLUS / Carlos Eduardo Barbosa

Various international projects are attempting to survey and map astronomical objects in space, such as the Dark Energy Survey (DES) and the Sloan Digital Sky Survey (SDSS). These initiatives periodically publish catalogs of images and data on the millions of stars, galaxies, and other structures that their telescopes have captured at different wavelengths (visible light, infrared, radio waves, gamma rays). “Although Brazilians regularly participate in astronomical surveys, S-PLUS is the first project of this size and scope to be led by the country,” points out astrophysicist Roderik Overzier of Brazil’s National Observatory (ON), one of the project leaders. Some 200 researchers are involved in the survey, 60% of whom are from Brazilian institutions. The small T80S telescope, which is an exact copy of a Spanish counterpart and was installed in Chile, is used primarily for this project.

Since it began operating 5 years ago, the device has produced two catalogs of images of 21 million celestial objects. Its goal is to scan an area equivalent to half of the sky observable from the southern hemisphere by pointing its camera at 4,500 areas of what is known as the Local Universe, which encompasses the Milky Way and its neighboring galaxies, such as the Magellanic Clouds and the Fornax and Hydra galaxy clusters. Each of the T80S’s 12 filters produces three images of an area of the sky the size of at least five full moons.

“We have already covered 40% of the area that we want to map in the survey,” says Claudia Mendes de Oliveira, from IAG at USP. “The project will continue for another three and a half years.” As well as discovering rarely observed objects, such as the ultra-metal-poor star SPLUS J2104-0049, the survey has captured many beautiful new images of known structures, such as the three printed to the left. Any researcher from a Brazilian institution can participate in S-PLUS. More details are available on the project’s website (www.splus.iag.usp.br). The astrophysicists involved have also partnered with similar projects mapping the northern celestial hemisphere, such as the J-PLUS and J-PAS collaborations, together with which they plan to produce a dataset that will cover nearly half of the entire celestial sphere.