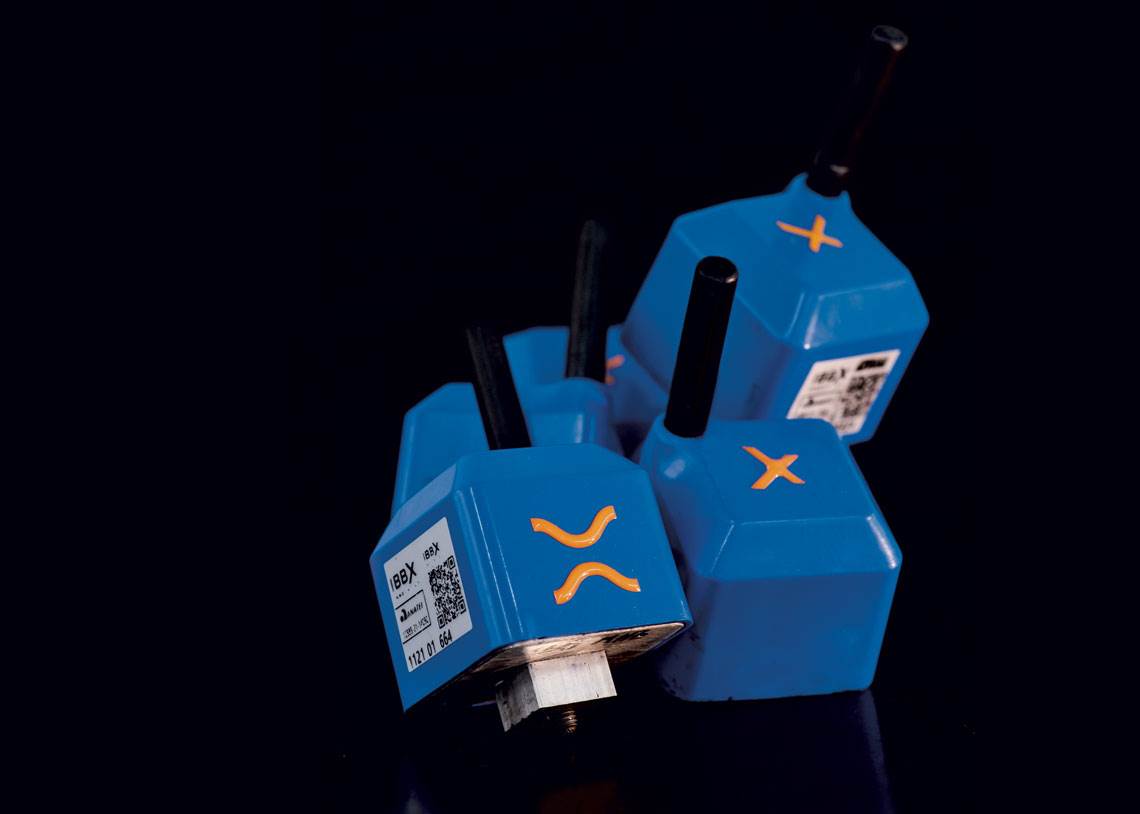 The device created by IBBX is cube-shaped, with 5 cm on a side

The concept of the Internet of Things (IoT), in which objects are able to generate and share information over networks, gained an impressive new example of how it can work in practice, here in the Brazilian industrial sector. A startup from Capivari, in São Paulo State, has developed a system that uses IoT, in which batteries are charged using energy harvested from the air. Created in 2018, IBBX Inovação offers industry a technology that captures the energy dispersed in the manufacturing environment in the form of electromagnetic radiation—emitted by high voltage cables, electrical panels, and industrial machine motors in operation—and transmits it, wirelessly, to batteries that power IoT sensors.

Installed in industrial equipment, IoT sensors collect data regarding the operation of the machines themselves, such as temperature, pressure, and energy consumption, and make that information available to their operators. The data is also stored in the cloud, continuously updating files with the equipment’s performance history (see infographic).

“In addition to the advantage of recycling lost energy, our solution is completely wireless and eliminates the need for cables to connect and power the sensors. Eliminating cables removes the expense and constant work of maintaining them,” emphasizes William Aloise, cofounder of IBBX.

The key element for capturing and transmitting energy through the air, explains electrical engineer Hugo Enrique Hernández Figueroa, from the School of Electrical and Computer Engineering at the University of Campinas (FEEC-UNICAMP), is a device called a rectenna. A hybrid antenna and rectifier, it captures electromagnetic waves from alternating current and converts them into direct current signals, suitable for operating the sensors. “The frequency spectrum for this application is vast: from a few megahertz radio waves to high optical frequencies. Energy efficiency can reach 90%,” he notes.

Collecting and transmitting energy through the air, Figueroa points out, is not exactly a novelty. The hypothesis had already been investigated in the late nineteenth century by scientists such as Nikola Tesla (1856–1943), the researcher says. Because the initial ambition was to transmit large amounts of energy, inherent challenges meant the idea was left in limbo, and resumed only in the 1960s. “The merit of IBBX came in developing a product with commercial appeal, and applying knowledge and technologies already available, such as recycling energy at low frequencies,” notes Figueroa, who is not related to the startup.

Aloise says the solution developed by IBBX is unprecedented and comes as a result of extensive research and development work. “Our application translates to energy capture and radiofrequency connectivity over long distances for IoT sensors. The combination of energy supply capability, the need to transmit data, and low cost of deployment solve the bottlenecks in scaling up IoT for industry,” the entrepreneur adds.

The company applied for 11 patents relating to their device and has already provided around 1,500 units for clients around the country

The company has 46 employees, with 14 dedicated to research and development, and has already filed 11 patent applications, six abroad and five in Brazil. IBBX has a portfolio of more than 30 clients, who have been supplied with around 1,500 of the units they invented: a cube five centimeters on a side, with an antenna, which costs on average US$80 (about R$400). The food company BRF, the MWM diesel motor company, and the tile manufacturer Confibra are three users of the startup’s solutions.

At MWM, maintenance engineer Humberto Ramos da Silva explains that IBBX sensors monitor about 150 devices in real time, collecting data on vibration amplitudes, temperature, pressure, and flow. “Our costs dropped, as we were able to dispense with a series of components, such as cables, cable trays, conduits, and electrical panels dedicated to motor pumps and gear motors [a system composed of an electric motor and a reduction gear].”

Mechanical engineer Wilker Forti, industrial manager at Confibra, also highlights the leap in the quality of equipment maintenance due to the data collected by IoT sensors. “By installing these devices on the machines, it became possible to establish inspection routines designed for each manufacturing equipment unit. Automatic data interpretation helped us avoid breakdowns and unexpected production delays,” says Forti.

Challenges to transmitting data in the industrial environment include obstacles such as physical barriers and overcoming electromagnetic noise over large areas, explains Aloise. With these problems, high-frequency waves, such as those from bluetooth and 3G or 4G devices, don’t propagate more than a few dozen meters. This would require the installation of lots of signal repeaters, raising infrastructure costs, as happens with the use of cables,” he adds. “To overcome these barriers, we developed our own communication protocol, which suffers less from interference in these environments and can cover long distances.”

Once the communication obstacle was overcome, the field was open for what IBBX considers one of the greatest benefits their technology offers: the predictive monitoring of a factory’s equipment. Because it’s connected to a network, machinery equipped with IoT sensors can be monitored online in real time, 24 hours a day, allowing for the detection of possible failures in advance.

“When we began collecting data, we realized that not every customer receiving data about vibration, temperature, and energy consumption from each piece of equipment has a vibration analyst, mechanic, or electrician to interpret this data. They need the information to be translated. So, we got busy developing software to manage the data collected by IoT sensors,” recalls Aloise. 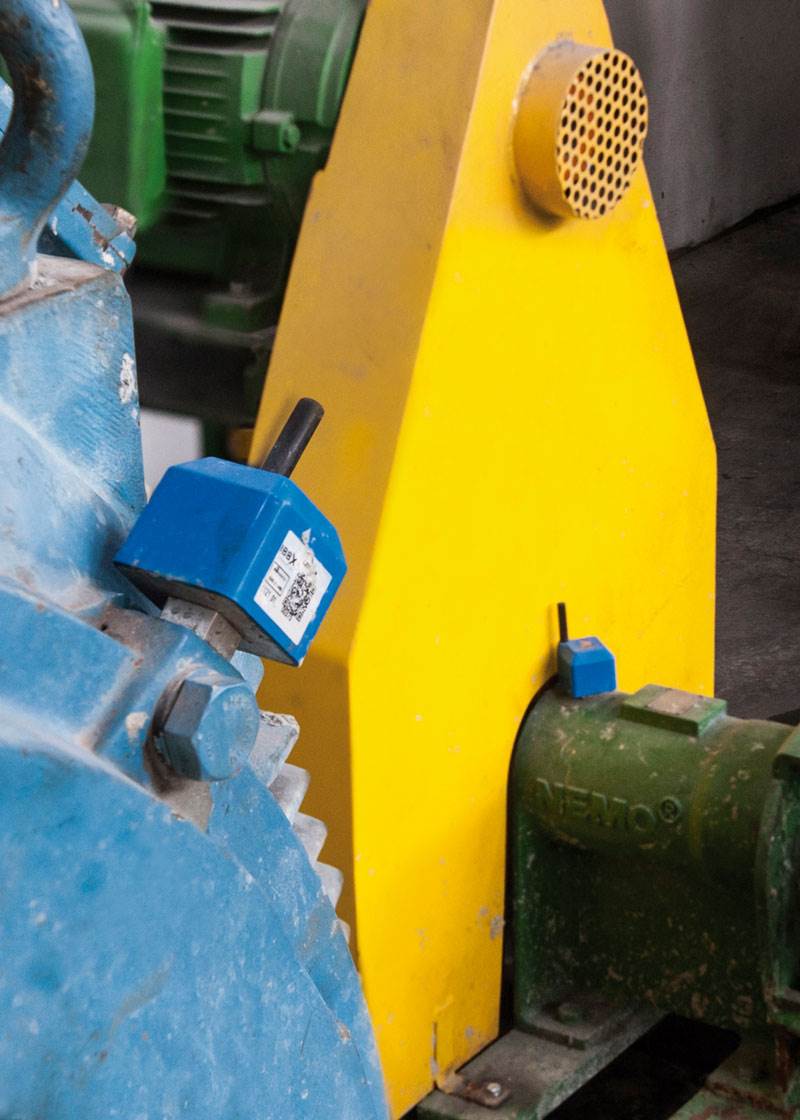 The difference between predictive monitoring and traditional preventive maintenance is that the prior is guided by the data constantly sent by the machines, while the latter works with predefined values from the manufacturers or suppliers of the assets and components being maintained. In preventive maintenance, for example, a machine bearing designed to last 10,000 hours must be changed when it reaches this limit. “With predictive monitoring provided by IoT sensors, maintenance or replacement of components is done according to the asset’s actual state of operation, avoiding unnecessary expenses and unscheduled delays in operations,” Aloise adds. It’s also possible to establish parameters to alert the customer when equipment is close to reaching the critical wear limit.

Another insight IBBX gained through its experience developing IoT solutions was that machine performance, even those of the same make and model, can differ depending on the location where they are installed and their operating regimes, among other factors. Therefore, it is important that the data provided by each piece of equipment be stored, in order to create a failure database and feed a program equipped with artificial intelligence that will evaluate—with increasing precision over time—different machinery operating under different conditions.

The idea to create the startup came from Aloise, and Luis Fernando Destro, the company’s current CEO. Destro studied physics at UNICAMP, left before graduating, then got a degree in mechanical engineering from the Piracicaba Engineering School (EEP), a municipal college. The initial focus of the venture was to collect energy dispersed in the environment to power cell phone batteries. “We were aiming for one business and hit on quite a few others,” says Aluísio Ribeiro de Lima, another IBBX partner, referring to the company’s origins.

Their first prototype was an antenna, 25 x 8 centimeters, that needed to be miniaturized to suit internal use in cell phones. They were making good progress with the challenge of miniaturization for smartphones, but other application possibilities proved to be more opportune, notably in the industrial sector, the environment where Aloise and Destro had previous experience.

“Working with investors and partners who supported the business, we decided to focus in on offering a service to industry. It made more sense, since, at that time, the mobile telephony sector didn’t offer the same possibility of scaling the application compared to the industrial sector,” recalls Aloise.

The startup envisions other applications for its technology in the not-too-distant future. “We know that IoT will be increasingly used in agribusiness, urban mobility, sanitation, and smart homes,” Aloise points out. “There are a lot of applications for our technology. We want to let it mature in industry so that we can move on to other sectors. We don’t need to invent the sensors, just provide the energy for them wirelessly, reducing their battery consumption and enabling them to communicate with receivers over long distances,” the entrepreneur emphasizes.