Between 70,000 and 10,000 years ago, there were repeated periods of heavy rainfall north of the Doce River mouth in Espírito Santo (orange circle), according to a new study
Eduardo Geraque
Issue # 287
jan. 2020
EnvironmentOceanography

Analysis of 14 sediment samples collected from the continental slope (the submerged transition zone between the outer edge of the continental shelf and the abyssal plain) along the Brazilian coastline from the south of Rio Grande do Sul to the north of the Amazon indicates that two distinct rainfall patterns occurred in the region during the last glacial period, particularly between 70,000 and 10,000 years ago. To the north of the Doce River, which runs through the states of Minas Gerais and Espírito Santo, there were significant and recurrent increases in rainfall over the so-called Ice Age. According to a scientific article by Brazilian and German researchers published in the journal Quaternary Science Reviews in December, the phenomenon was not seen below this river, which is located at a latitude of roughly 20 degrees south.

In areas where there were repeated increases in rainfall, which includes the northeast coast and the Amazon rainforest, there was an intense rainy season during autumn and winter. The data suggest that in the rest of the Brazilian territory, in the south and southeast of the country, such climate changes did not occur. “Previous studies have claimed that frequent rainfall increases during the last glaciation occurred throughout the Brazilian territory and that the most intense rainfall took place in the summer,” comments geologist Cristiano M. Chiessi of the School of Arts, Sciences, and Humanities of the University of São Paulo (EACH-USP), who led the study. “But the data from our research do not support this theory.”

The geochemical composition of the sediment cores, as the samples are called, was determined by X-ray fluorescence analysis, yielding parameters that allowed the researchers to infer the rainfall patterns of the distant past. Based on the proportion of marine materials such as calcium, which mostly comes from shells, and the proportion of continental origin, it is possible to reconstruct the rainfall pattern of a region. The more rain that falls over a continent, the greater the erosion and the more terrigenous sediment is carried by rivers to their mouth in the ocean. In addition to analyzing the sample cores, one of which was obtained by the authors of the article (the others were consulted in the scientific literature), the researchers also ran climate models to recreate the likely rainfall pattern over present-day Brazil during the last glacial period.

Because there was no sediment sample from an important stretch of the Brazilian coast between Espírito Santo and Paraíba, Chiessi’s group had to obtain a core from the region to fill the gap in the data. The location chosen to collect the material was the mouth of the São Francisco River, on the border between the states of Sergipe and Alagoas. The researchers participated in an oceanographic expedition on the German ship RV Meteor in 2016, taking a 10.4-meter core of sediment from a slope located at the mouth of the river. “This core received terrigenous sediments from the São Francisco River for at least the last 70,000 years,” says Marília C. Campos, who is studying her PhD under the supervision of Chiessi and is lead author of the article.

There were abrupt climatic changes during the last glacial period that affected all of the continents to some degree. In both the winter and the summer, temperatures were 16 degrees Celsius lower on average than currently measured in the North Pole. Glaciers advanced towards the equator in North America, Europe, and Asia. The situation, however, became even more dramatic at six time intervals between 63,000 and 15,000 years ago. During these intervals, temperatures in the northern hemisphere plummeted further, and icebergs reached as far south as the Iberian peninsula. These periods of more drastic climate change were described in 1988 by German marine geologist and climatologist Hartmut Heinrich, who until 2017 worked at Germany’s Federal Maritime and Hydrographic Agency (BSH). They are therefore known as Heinrich events.

The duration of these extreme moments varied from a few hundred to a few thousand years. In the tropics of South America, temperature changes were mild during the Heinrich events, but it did rain much more. In what is now Brazil, the new study suggests that the geographical distribution of these torrential rains over coastal areas was not uniform. Chiessi’s group even proposed a new mechanism to explain the profusion of rainfall above the Doce River and the scarcity below. 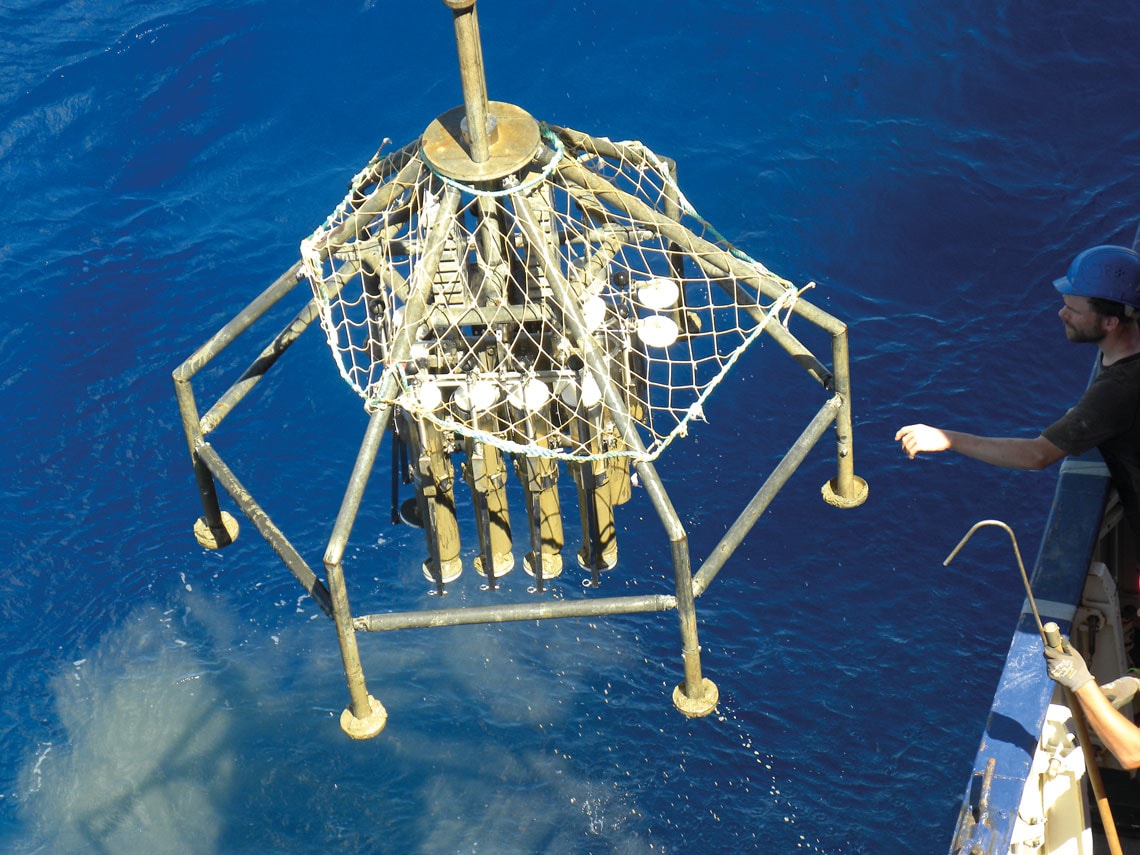 Sediment being collected at the mouth of the São Francisco River during an oceanographic expedition onboard the German ship RV Meteor in 2016Igor M. Venancio

The dominant hypothesis in the scientific literature is that periods of greatly increased rainfall in the Amazon and northeastern Brazil were associated with a chain of climatic phenomena fundamentally linked to the summer season. Most of these storms, according to the widely accepted hypotheses, gained volume from the evaporation of water in the tropical North Atlantic. “But our research suggests that there was a different mechanism responsible for the increase in rainfall in these two regions during the Heinrich events, one which until now has not figured in the scientific literature,” says Chiessi. According to him, evaporation from the North Atlantic had nothing to do with the Ice Age storms over the northern coast of Brazil.

Instead, the drastic climate changes of the past, at a time when modern man was colonizing the various continents of the planet, was produced by abrupt drops in the intensity of ocean currents circulating in the Atlantic. Known as the Atlantic meridional overturning circulation, these global jet streams carry warm, salty, surface waters from the South Atlantic to the high latitudes of the North Atlantic. The waters travel on the surface of the ocean from Salvador to Reykjavík, in Iceland, before heading south, at a greater depth, toward Antarctica. This enormous circulation system has a major impact on the planet’s climate. It is estimated that the amount of energy transported per second by the Atlantic meridional overturning circulation is almost 100,000 times greater than the Itaipu hydroelectric plant generates with all of its turbines in operation.

According to Chiessi, the northerly stream becomes even more saline near the equator due to intense evaporation at low latitudes. When it later cools at higher latitudes, its volume contracts. The increased salinity and lower volume make the water denser. The stream then submerges to almost 2,000 meters deep and travels thousands of kilometers along the ocean floor to the Antarctic region, where it returns to the surface. The decreased intensity of this ocean circulation would have altered the rainfall pattern along the coast of Brazil during the last glacial period.

Chiessi’s group noticed an interesting alignment between the rainfall during the Ice Age and the current biodiversity of the Atlantic Forest. The Doce River, which separates the area that underwent drastic changes in the north from the less variable climate in the south, is also considered a kind of dividing line between two fauna and flora systems in the Atlantic Forest. Many amphibian and reptile species found in the northern region of this biome do not live in the south. “It is possible that the development of species in the north of the Atlantic Forest was influenced in some way by the periodic occurrence of heavy increases in precipitation,” says the geologist. “The same did not occur in the south of the biome.”

Biologist Cristina Miyaki, from USP’s Institute of Biosciences, however, is reluctant to attribute the differences found in the Atlantic Forest exclusively to the non-uniform torrential rainfall patterns on the Brazilian coast during the last glaciation. Although there are several studies showing different fauna systems in the north and south of the biome, there are others, examining groups of birds, for example, that found no such dichotomy. “It does not seem reasonable to assume that the evolution of biodiversity in the region depended only on climate change,” comments Miyaki. “For example, changes resulting from orogenic activity [relating to the formation  of mountains] may also have been important, as well as interactions between different groups of animals. In other words, the history of these organisms is highly complex, and different species have responded and continue to respond differently to the same changes.”