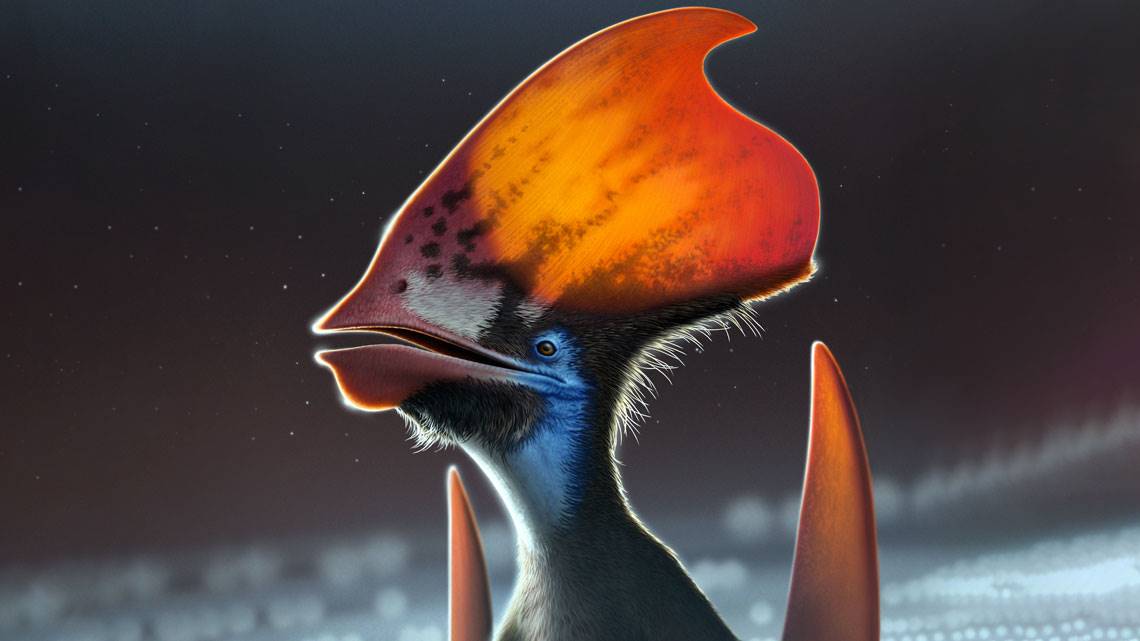 Artist's depiction of a Tupandactylus imperator, which lived about 115 million years ago

The fossilized crest of a pterosaur, a creature that 115 million years ago flew over what is now Chapada do Araripe in northeast Brazil, could change our understanding of the origin and evolution of feathers, structures currently only seen in birds, but that in the remote past were also found in dinosaurs. According to an article published in the scientific journal Nature on April 20, the protuberance on the head of this extinct winged reptile was covered in two soft-tissue structures similar to colored feathers: one type was small and constituted by a single hair-like filament; and the other was larger with branches, more like the feathers of modern birds.

The presence of these feathers or protofeathers of different shades—it is impossible to know exactly what colors they were—was identified by a group of European and Brazilian paleontologists who analyzed the fossilized crest and partial skull of a pterosaur of the species Tupandactylus imperator. This was a large animal with an estimated wingspan of 5 meters. The fossil, previously in the possession of the Royal Belgian Institute of Natural Sciences in Brussels, was amicably repatriated to the Earth Sciences Museum (MCTER) in Rio de Janeiro in February this year, with no legal proceedings involved (see the board). Hebert Bruno Nascimento Campos, a biologist from Maurício de Nassau University Center in Campina Grande, Paraíba, highlights the high quality of the pterosaur fossil’s conservation. “The level of preservation of the soft structures is surprising,” says Campos, one of two Brazilians who coauthored the paper. The other is Edio-Ernst Kischlat, a paleontologist from the Porto Alegre division of the Geological Survey of Brazil (CPRM).

Using modern electron microscopy techniques, the scientists found two types of differently shaped melanosomes in the soft tissue of the crest preserved in rock. Melanosomes are organelles that carry the pigment melanin, which is what gives color to the skin and feathers of modern birds—and some dinosaurs. One of the organelles is more rounded, the other is longer and oval. The melanosomes were identified inside pycnofibers, a type of dense filament that typically covers pterosaur skin. Some scholars consider pycnofibers a coat more similar to mammalian hair. Others, like the team behind the new study, argue that they are a variant of feathers.

“In modern birds, feather color is strongly linked to the shape of the melanosomes,” Maria McNamara, a paleontologist from University College Cork (UCC), Ireland, and one of the coordinators of the study, said in a press release. “The fact that the pterosaur feather types had different melanosome shapes means these animals had genes capable of controlling feather color. This shows that coloration was a critical feature of even the earliest feathers.”

Pterosaurs were the closest evolutionary group of vertebrates to the dinosaurs, from which today’s birds descended. They were contemporaries that emerged and disappeared from Earth at almost the same times. They coexisted from 235 million years ago until 66 million years ago, when both groups went extinct. Since some dinosaurs and pterosaurs seem to have had colored feathers, McNamara’s team suggests that these structures must have a very ancient origin. Feathers, or something similar to them, must have been present among the vertebrates from which both dinosaurs and pterosaurs evolved around 250 million years ago.

According to the authors of the paper, the feathers—or protofeathers—of the Tupandactylus did not help it to fly. This seems like a paradox, since pterosaurs were the first vertebrates capable of taking flight, tens of millions of years before birds. The (possibly) colored feathers of the fossil from Araripe may have helped them control their body temperature or functioned as a type of visual signal to attract reproductive partners. 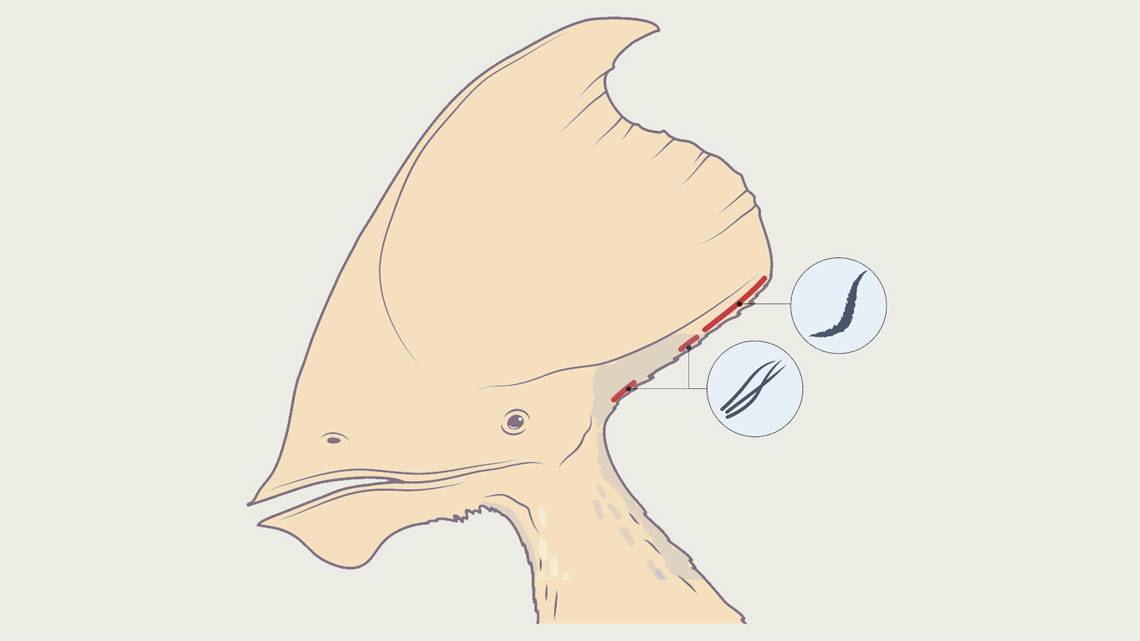 British paleontologist Michael Benton of the University of Bristol, UK, is convinced that pycnofibers are a type of feather. “They are identical to certain dinosaur and bird feathers in every detail—their general shape, size, branching, attachment to the skin, and the fact that they contain melanosomes,” Benton said in an interview with Pesquisa FAPESP. The British scientist did not participate in the Araripe fossil study, but wrote a commentary on McNamara’s article for Nature.

Alexander Kellner, a paleontologist who specializes in pterosaurs and director of the Brazilian National Museum in Rio de Janeiro, disagrees with Benton. “I don’t want to diminish the importance of this new study. It used very modern techniques, driving an important debate about the origin of feathers, and was based on quality material from Araripe, one of the best sites in the world for pterosaur fossils,” says Kellner. “But I’m not convinced that the melanosomes were inside feathers.”

In 1997, Kellner described the first known specimen of Tupandactylus imperator, the species holotype. In 2009, based on a fossil from China, he gave the name pycnofibers to the filaments that typically cover the skin of pterosaurs. He states that pycnofibers are missing the essential characteristics of feathers, especially the rachis—the main stem that a series of branches (the barbs) are attached to. “It is also possible that they aren’t melanosomes at all and that the structures identified as feathers in the article are not from the epidermis [surface layer of the skin], but from the dermis [the innermost layer, below the epidermis],” argues Kellner. “The cut open skin of a pterosaur could generate structures that could be mistaken for pycnofibers. I’ve seen this before in a dinosaur specimen.”

It is not always easy to discern the different structures that make up the soft tissues in fossils. Organisms preserved in geological layers are usually flattened, their bodies pressed and “stamped” into the rock. This can make it difficult to separate and identify the soft parts of a fossil, such as the skin, muscles, and connective tissue.

Paleontologists have been debating whether the filaments found on pterosaur skin can be considered feathers for at least five decades. With supporters on both sides, the discussion gained momentum after a small specimen of the winged reptiles was found in Kazakhstan, between central Asia and eastern Europe, and described in 1971. The fossil had a wingspan of just two feet, and parts of its body were unmistakably covered in the filaments. It is no coincidence that the species was named Sordes pilosus, meaning “hairy devil” in Latin.

If it can be proven that the pterosaur pycnofibers are feathers, and especially if they were colored, the implication would be that these structures originated much earlier than currently thought. They may have been a feature of an animal group called Avemetatarsalia, a vertebrate lineage that includes both dinosaurs (and birds) and pterosaurs.

“In this case, the simplest and most conservative scenario for the origin of feathers would be that structures equivalent to them, such as pycnofibers, appeared just once in the evolutionary process,” says Max Langer, a paleontologist from the University of São Paulo (USP), Ribeirão Preto campus. “Feathers would have appeared in the first Avemetatarsalia some 250 million years ago, which would have passed this characteristic onto lineages that later evolved into dinosaurs and pterosaurs.” It is possible that feathers appeared more than once in evolutionary history, independently and at different times in dinosaurs and pterosaurs. But paleontologists like to embrace frugal hypotheses, since nature generally follows the easiest path. 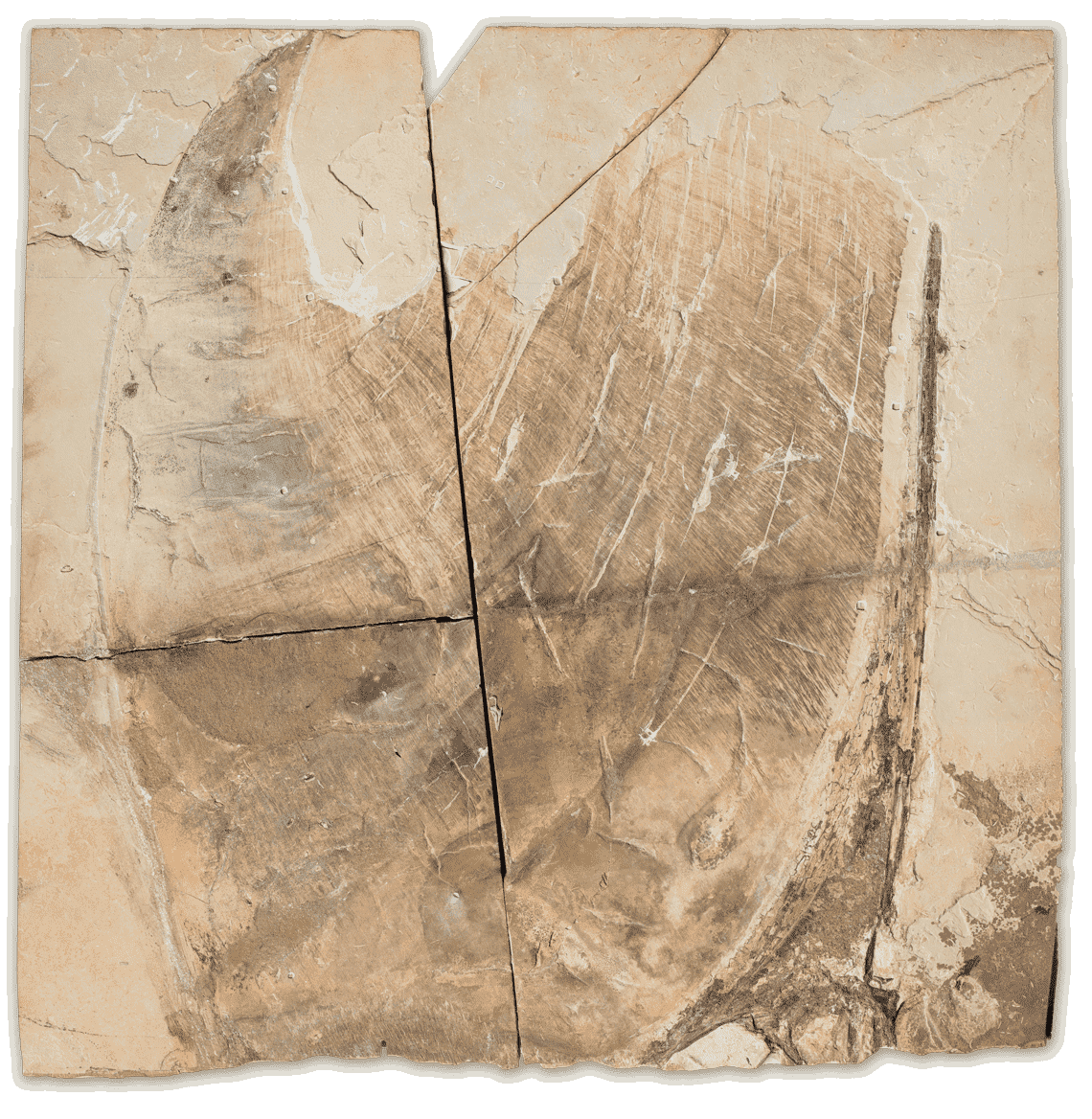 On Sunday, February 6 this year, a diplomatic pouch from Brussels, the capital of Belgium, arrived at Galeão airport in Rio de Janeiro containing five pieces of rock—four large and one small, that together form a 20-kilogram, 60-centimeter-by-60-centimeter block. The rock was imprinted with the crest and partial skull of a well-preserved fossil of the pterosaur species Tupandactylus imperator, which lived in what is now Chapada do Araripe, on the border between the Brazilian states of Ceará, Pernambuco, and Piauí, 115 million years ago.

The artifact was taken from Brazil illegally, like many other fossils from the region, at an unknown time, ending up in the hands of a private collector in Europe. An agreement for an amicable repatriation free of legal proceedings was signed on October 11 last year between the Brazilian embassy in Brussels and the Royal Belgian Institute of Natural Sciences, where the fossil was held for study by the institution’s researchers. The fossil is now being stored in the Earth Sciences Museum (MCTER) in Rio de Janeiro, which is managed by the Geological Survey of Brazil (CPRM). “It is on display in an exhibition of Brazilian pterosaur fossils and models until May 7,” says Rafael Costa da Silva, curator of the paleontology sector at MCTER.

While studying pterosaur fossils at the State Museum of Natural History Karlsruhe (SMNK) in Germany in 2016, biologist Hebert Bruno Nascimento Campos saw a video presentation by Aude Cincotta, a paleontologist who was doing a PhD at the Royal Belgian Institute of Natural Sciences at the time, about a pterosaur specimen from Araripe. “I was interested in the artifact and asked if I could see it,” says Campos. He went to Brussels and quickly examined the specimen. He later discovered that despite being at the Belgian institute, the fossil belonged to a private collector.

In 2017, together with Cincotta, German paleontologist and SMNK curator Eberhard Frey, and two others, Campos gave a brief report on the fossil at a paleontology conference. He later contacted Brazilian paleontologist Edio-Ernst Kischlat from the Porto Alegre branch of the Geological Survey of Brazil (CPRM), who started an informal negotiation process on returning the fossil to Brazil with the directors of the Royal Belgian Institute of Natural Sciences. Official negotiations with the institute were handled by Brazil’s Ministry of Foreign Affairs and an agreement was successfully reached, resulting in the arrival of the fossil in February. Before the article about the apparently colored feathers from Tupandactylus was published in Nature, the artifact was already in Brazil.

The outcome was very different to a previous situation involving another fossil from Araripe that was illegally taken from the country. In December 2020, British paleontologist David Martill of the University of Portsmouth, UK, and his colleagues published an article in the journal Cretaceous Research describing a rare dinosaur specimen informally known as Ubirajara jubatus, which lived 120 million years ago (see Pesquisa FAPESP issue nº 301). The study, which did not convincingly explain the origin of the fossil, was heavily criticized by Brazilian paleontologists and on social media. In the end, Cretaceous Research decided to retract the article. The dinosaur fossil in question is currently at SMNK. Eberhard Frey, who is a curator at the museum, was a coauthor of the retracted paper.