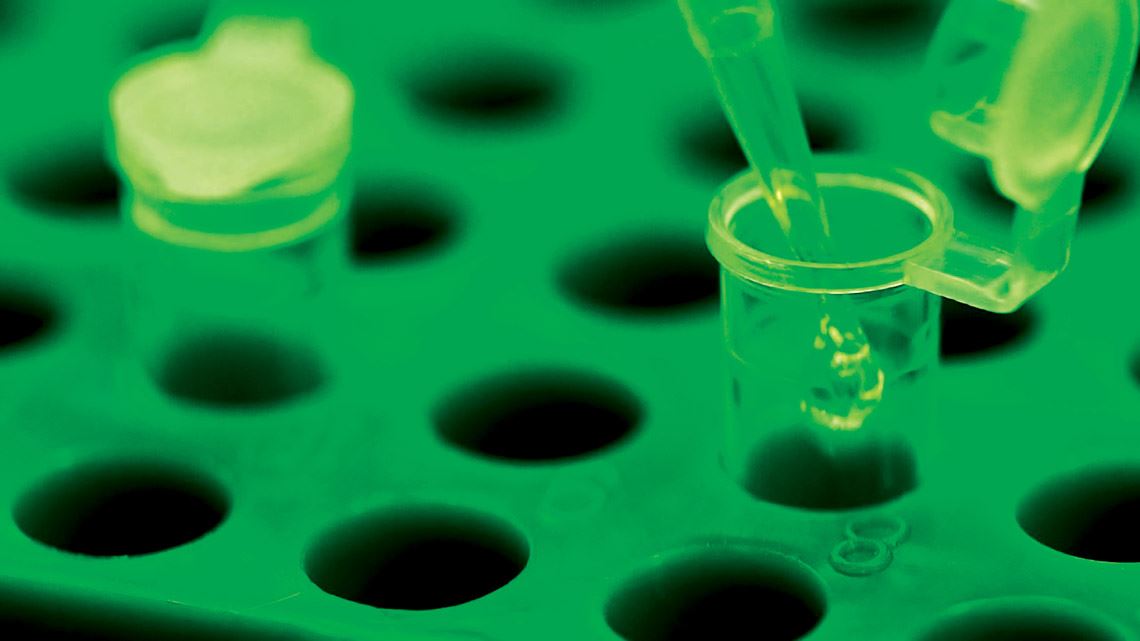 The story of Brazil’s cutting-edge research to produce biofuels from sugarcane has just gained a new chapter. On December 10, 2021, Brazil’s National Biosafety Technical Commission (CTNBIO) awarded transgene-free status to two sugarcane varieties genetically edited by researchers at the Brazilian Agricultural Research Corporation (EMBRAPA). The new varieties are now in field trials. According to EMBRAPA, these are the first genome-edited sugarcane plants to be developed transgene-free, or without inserting external DNA. The new varieties were obtained by using CRISPR-Cas9 technology to silence genes without incorporating any gene sequences from other organisms. “What we did was create an improved plant by a process that is very similar to how it is done in nature,” says Hugo Molinari, a crop scientist who led the research group at EMBRAPA’s agricultural bioenergy chapter in Brasília.

CRISPR, which stands for Clustered Regularly Interspaced Short Palindromic Repeats, uses the protein Cas9 to cut DNA at target sites in order to introduce mutations. French geneticist Emmanuelle Charpentier and American biochemist Jennifer Doudna won the 2020 Nobel Prize in Chemistry for their development of the tool as a simpler, faster, and cheaper approach than other gene-editing methods (see Pesquisa FAPESP issue nº 288).

Using the new technology, Molinari obtained two sugarcane varieties with properties offering benefits for the sugar and energy industry. The first, dubbed Flex I, has a more readily digestible cell wall. This improves energy recovery from sugarcane biomass in both power generation and animal nutrition applications—the cell wall is more easily broken down to gain access to the plant’s energy reserves. The other variety, Flex II, has a higher concentration of sucrose, which gives it a higher yield potential. Development of both varieties was achieved by suppressing the genes BAHD1 and BAHD5, respectively, which are involved in the production of acyltransferases. These enzymes, which Molinari has researched for more than 12 years, form the cell wall structure of sugarcane plants.

“To use this gene-editing technique you need to have well-established targets,” says the researcher. He already knew that these enzymes were involved in cell wall rigidity, and surmised that silencing the gene that codes for these enzymes, BAHD1, would improve digestibility. His theory proved correct, leading to the development of the Flex I variety. But his research group was in for a pleasant surprise when they began studying another gene of the same family, BAHD5: silencing this gene produced not only greater digestibility but also a higher concentration of sugars. “The levels of glucose, sucrose, and fructose all increased in both the culm [stem] and leaf tissues,” says Molinari.

CRISPR-Cas9 gene-editing technology had previously been used for sugarcane improvement by a research group led by American crop scientist Fredy Altpeter, at the University of Florida. However, the methods he used yielded plants that are considered transgenic, as exogenous genes were employed in the editing process. “He incorporated three genes, one coding for the protein Cas9, one coding for guide RNA [which guides the Cas9 protein to the genome site to be edited], and a third known as a selectable marker, as it allows identification of transgenic cells,” explains biologist Marcelo Menossi Teixeira, head of the Functional Genome Laboratory at the University of Campinas (UNICAMP) Institute of Biology.

Texeira, who was not involved in the research at EMBRAPA, began using CRISPR technology three years ago when one of his postdoctoral students, Lucia Mattiello, went on an internship at the University of Florida with Altpeter as her supervisor. Menossi is currently investigating how gene editing, among other tools, can help to create a more drought-resistant sugarcane variety. “Altpeter has gotten some interesting results, but eliminating transgenes [editing genomes without employing transgenics] in sugarcane is not an easy task,” says Texeira, referring to sugarcane’s complex genetics—the plant has approximately 10 billion base pairs, three times as many as the human genome.

“The research results at EMBRAPA are an important breakthrough. The fact that Molinari is already running field trials shows that the technology is feasible,” says biologist Adriana Capella, head of research and development at the Sugarcane Technology Center (CTC). Sponsored by local sugar and energy companies and the Brazilian Development Bank (BNDES), the center, located in Brazil’s southeastern city of Piracicaba, developed and secured CTNBio approval of the world’s first transgenic sugarcane variety in 2017 (see Pesquisa FAPESP issue nº 258). Now, it is also investing in gene editing via CTC Genomics, a unit opened in 2018 in Saint Louis. “We’re currently validating technology incorporating exogenous genes, but we also have DNA-free edited plants at the greenhouse,” says Capella. 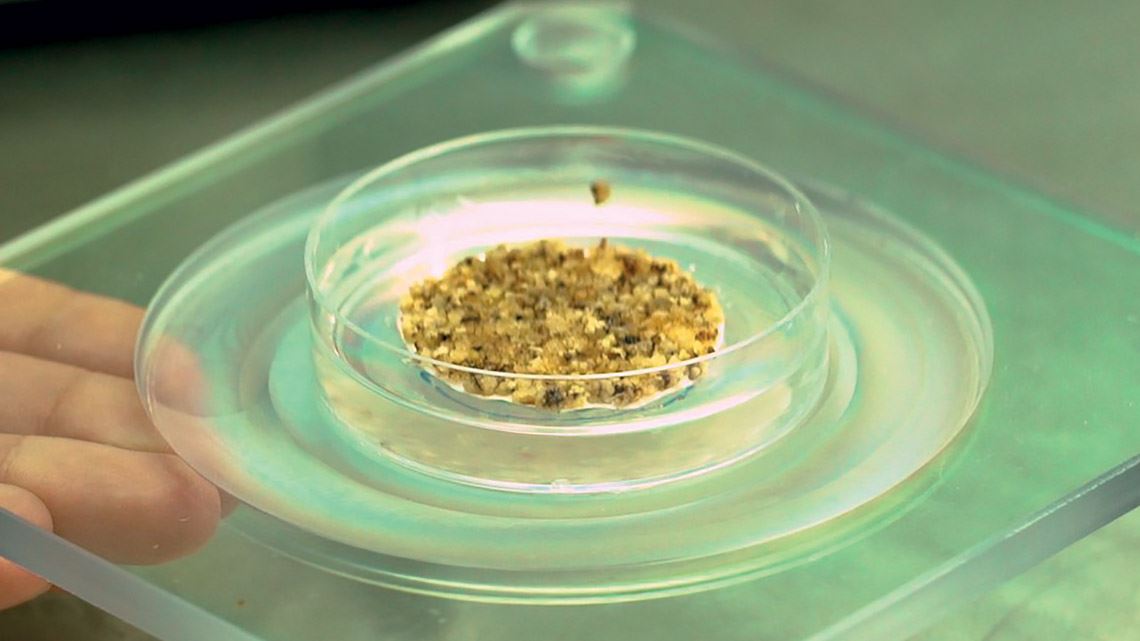 Quick and cheap
The case for developing a genetically improved plant variety without exogenous genes is an economic one. Securing CTNBio approval of a transgenic variety is a slow and costly process that requires a long series of biosafety trials. According to Molinari, transgene varieties cost an estimated US$130 million to develop, with around 60% of the overall cost going to the regulatory trials needed for commercial clearance.

“Only large multinationals have the money to get a transgenic variety approved. That is why excessive regulation becomes a sort of natural selection where only large corporates survive,” she says. Cheap gene editing, Molinari continues, is revolutionizing the sector by mainstreaming the use of biotechnology. “It’s a game that small startups, research institutes, and universities can now also play,” she says.

Crop scientist Alexandre Nepomuceno, head of EMBRAPA’s Soya chapter, highlights another advantage of CRISPR: simplicity. “It’s a very quick, cheap, and accurate technology.” He first learned about the new method in 2011 as head of EMBRAPA’s Virtual Laboratory Abroad Program (Labex). He was working at the Plant Gene Expression Center at the University of California in Berkeley, where Jennifer Doudna was based.

“I was using a genome-editing method known as Talen, then the state-of-the-art technology, alongside Molinari,” recalls Nepomuceno. “One day, we were discussing soya gene editing with researchers at the center during a coffee break when they told us about the newly developed CRISPR method. Using the new tool, it took just one week and US$500 to arrive at the same results that had taken four months and US$10,000 to produce with previous methods,” says Nepomuceno.

His story, he says, illustrates the importance of academic exchange programs and cross-border research collaborations for the advancement of science in Brazil. According to EMBRAPA, collaborations are also an important way to take innovation from the laboratory to the field. The institute is currently seeking partners to bring the new sugarcane varieties to market as it works on getting patents on the technology. 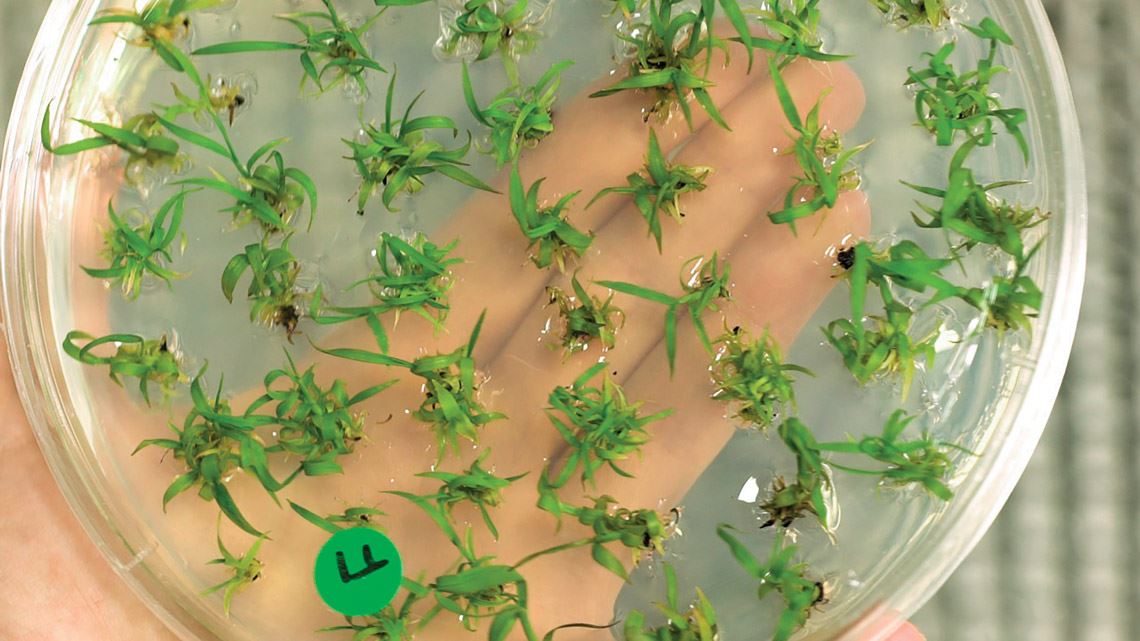 On the right, genetically edited seedlings at EMBRAPACésar Romagna

In September last year, a tomato variety with a five-times higher content of gamma-aminobutyric acid (GABA) became the first CRISPR-edited food to be sold commercially anywhere in the world. The new tomato variety is currently being sold in Japan. According to its developers, Tokyo-based Sanatech Seed, high GABA levels help to reduce blood pressure and stress.

In Brazil, the first CRISPR-edited plant is a corn variety produced by Corteva Agriscience and approved by CTNBio as transgene-free in 2018. The new variety has been made to produce a single type of starch, amylopectin, by silencing the gene responsible for the production of amylose. This makes corn more readily digestible. The new variety is still at the research stage and has not yet been brought to market.

Since 2017, EMBRAPA’s genome-editing programs have been focused on four crops—sugarcane, soybeans, maize, and beans. Drought tolerance, pest resistance, inactivation of antinutritional factors, and greater durability are some of the attributes being targeted by the institute’s genetic improvement efforts. “Genome editing opens a whole world of possibilities that have never been explored,” says Molinari. “Transgenics already offer huge potential, but in Brazil’s context, the deployment of CRISPR-Cas9 technology for the genetic improvement of plants, animals, and microorganisms will be truly a game changer.”