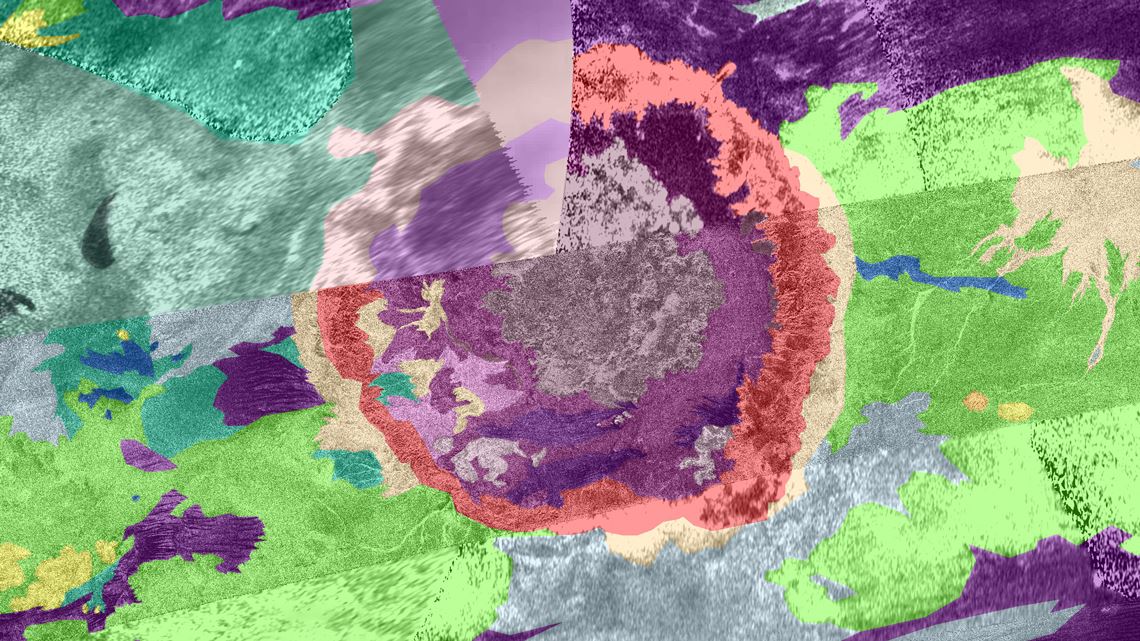 When a meteorite crashed into what is now the Gulf of Mexico 65 million years ago, it left a crater 200 kilometers (km) in diameter and caused changes to the Earth’s atmosphere that eventually led to the extinction of 75% of the planet’s life forms, including the dinosaurs. However, major collisions on planets and moons do not always lead to destruction. They can also precipitate physical and chemical changes that result in the formation of amino acids—molecules essential to life—and even primitive life forms such as bacteria. This may have been the case at Menrva, a 425 km wide crater north of the equator on Titan, Saturn’s largest moon. Menrva was the Etruscan goddess of art and war on which the Romans based the goddess Minerva.

“The collision that formed Menrva, the largest crater on Titan, may have been powerful enough to break through the 75–100 km thick layer of ice that covers a submerged liquid ocean on the moon,” explains Alvaro Crósta, a geologist from the Institute of Geosciences (IG) at the University of Campinas (UNICAMP), author of a study that examined the crater’s formation, published online in the journal Icarus at the end of August. “By breaking the ice crust, the impact may have allowed organic material from the ocean to reach the surface and vice versa,” says Rosaly Lopes, a Brazilian astronomer from NASA’s Jet Propulsion Laboratory (JPL) who participated in the study.

Lopes considers Titan, which has a lot of organic material on its surface, the most similar known celestial body to Earth. It has an atmosphere and is the only place in the Solar System, besides Earth, with flowing rivers—although they are rivers of methane, which also falls as rain. Titan still experiences intense geological activity, with winds that form dunes and erosion that modifies its craters. 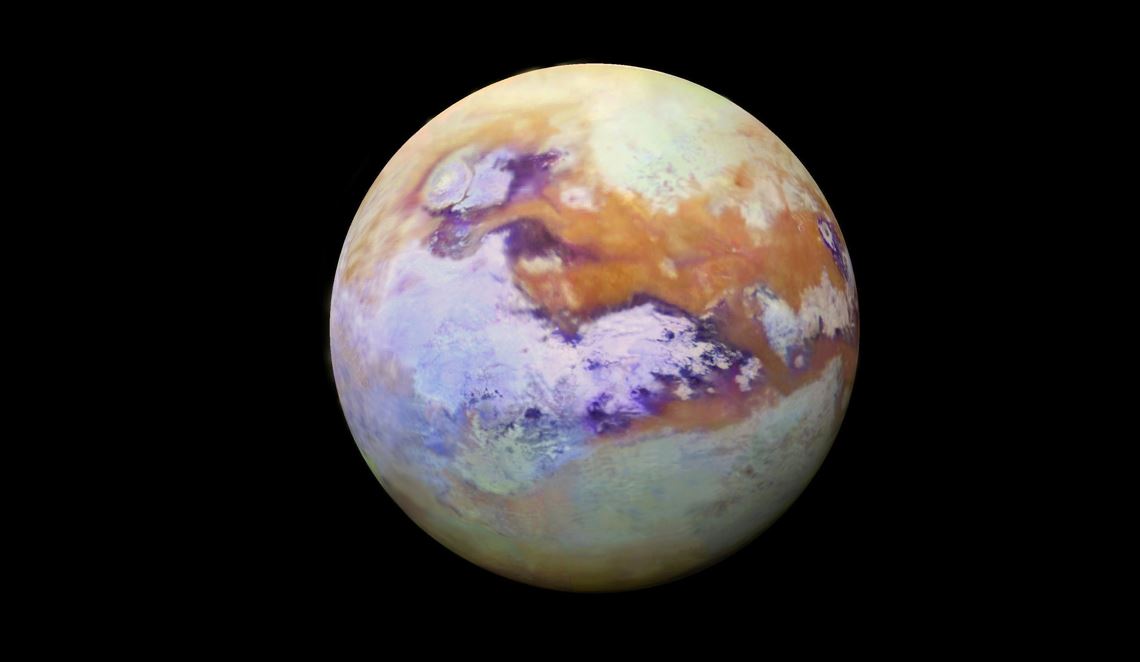 The astronomer worked on the Cassini-Huygens mission, which orbited Saturn and some of its moons between 2004 and 2017, and based on the data collected, studied Titan’s still uncertain potential to harbor life (see Pesquisa FAPESP issue nº 248). The probe found that Titan’s average surface temperature is negative 180 degrees Celsius (˚C), so low that ice on the moon is as hard as Earth’s rocks.

Crósta and Lopes and their teams examined the Menrva crater using data collected by the Cassini-Huygens probe and mathematical simulations processed by a supercomputer. In the most consistent simulation, the comet (made of ice) or asteroid (made of rock) that formed Menrva—which it was is still unknown—was 34 km in diameter and traveled through space at a speed of 15 km per second (km/s). Upon entering Titan’s atmosphere, which is 50% denser than Earth’s, it slowed down and hit the surface at 7 km/s (the equivalent of 25,200 km per hour).

Like a stone dropped into a pool of water, the impact that formed Menrva between 500 million and 1 billion years ago generated circular waves over the icy surface, which was heated by the collision. “Partially liquefied by the energy of the impact, Titan’s surface would have become elastic,” says Crósta, who worked at JPL in 2018 and 2019 with funding from FAPESP. This led to the formation of patterns similar to those seen when a stone falls into water. “Initially, a central peak is created, surrounded by rings. This peak then collapses and sinks. This upward and downward movement is repeated a few times,” explains the geologist.

On Titan, according to the simulations, it was the upward and downward movement of this central peak is that broke through the thick layer of ice within a few seconds, rather than the initial impact of the comet or asteroid. Crósta explains that after the ice broke, the different layers and organic materials remained in motion for about 150 minutes, until they were stabilized by gravity. The central peak may have risen as high as 40 km before settling. According to the simulations, the central peak and resulting rings were previously much higher than their current 500 meters, since they have been worn away by erosion over hundreds of millions of years.

The heat of the collision that formed Menrva may have been enough to decompose molecules, including water, on the icy surface. “The energy resulting from the impact can modify molecules and form new molecules or compounds,” says Fabio Rodrigues, an astrobiologist at the Chemistry Institute (IQ) of the University of São Paulo (USP) who did not participate in the study. He highlights that this information could be used to guide future missions to Menrva or even the choice of landing site.

“Ever since Menrva was discovered, we have been asking ourselves whether the collision could have broken this ice crust,” said Ralph Lorenz, from the Applied Physics Laboratory at Johns Hopkins University, USA, in an email. “This new study reveals the consistent results of a break, as we expected,” he added.

Lorenz is chief designer on NASA’s DragonFly mission, which intends to send a drone to Titan’s surface to look for evidence of water or organic compounds. A probe and the drone are expected to leave Earth in 2027, reaching Saturn’s moon in 2035. The chosen landing site is a region close to the 80 km Selk crater.

“It is too small to have broken through the ice crust just below the surface, but the impact could have allowed the resulting water to interact with organic compounds on the surface,” explains Lorenz. Selk was chosen because it is an easy place to land and it is more easily visible from Earth.