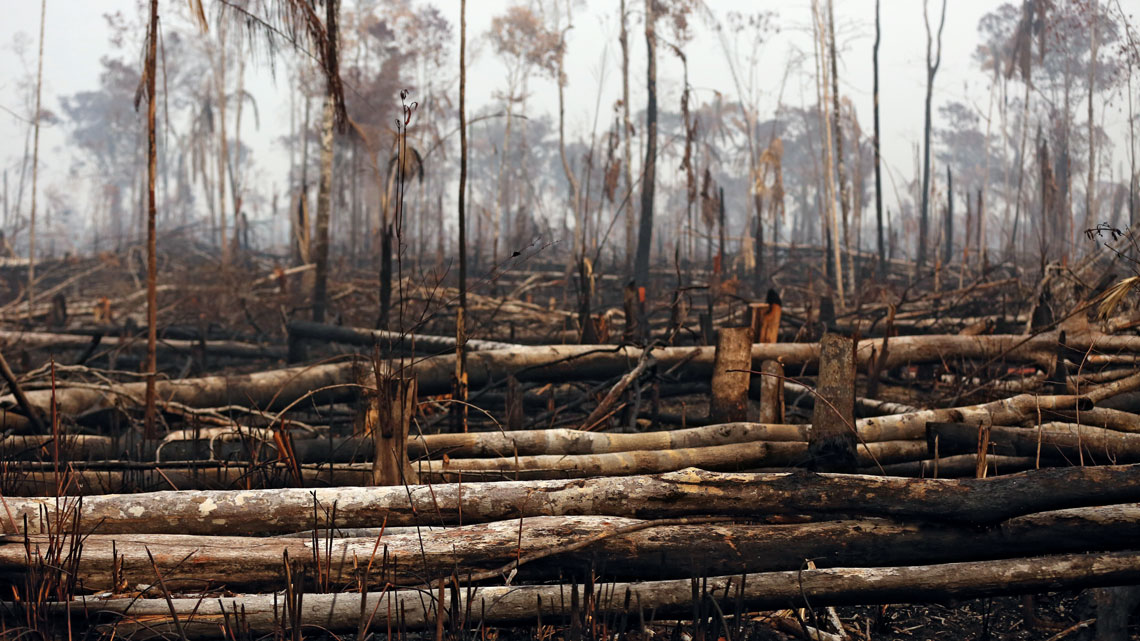 Burned and deforested area of the Amazon rainforest in Boca do Acre, Amazonas State, in August 2019

The Amazon is losing its ability to remove carbon dioxide (CO2) from the atmosphere, meaning it is no longer helping to slow down global warming. Between 2010 and 2017, the world’s largest tropical rainforest released a few hundred million tons more carbon each year, on average, than it removed from the air and stored in its vegetation and soil. During this period, the carbon balance in the Amazon, which represents the sum of all emissions minus all carbon dioxide absorption in the biome, was positive. The result is part of a comprehensive international study led by Brazilians, whose preliminary results, with no margin of error yet calculated, were presented at the meeting of the American Geophysical Union (AGU) held December 9–13 in San Francisco, California.

With some 5 million square kilometers of preserved forest, the Amazon was, until recently, considered a carbon sink, a name given to regions, activities, or processes that absorb more CO2 than they emit. When the opposite occurs and emissions exceed absorption, it is known as a carbon source. If the emission and absorption of CO2 are equal, the carbon balance is neutral. “In the period analyzed, the Amazon was a consistent source of carbon,” says chemist Luciana Gatti, head of the Greenhouse Gas Laboratory (LAGEE) at the Brazilian National Institute for Space Research (INPE), which took most of the atmospheric measurements that underpin the study’s results. “If we exclude the data from years that suffered major droughts, such as 2010, 2015, and 2016, the biome is almost neutral, but emissions still slightly exceeded absorption.” Drought years are known to reduce the rainforest’s ability to remove carbon dioxide from the atmosphere and significantly increase emissions of the gas.

The researchers highlight the rising number of wildfires—which directly release the carbon stored in vegetation into the Amazonian atmosphere—and increased tree mortality due to more severe and prolonged droughts as the main factors behind the Amazon becoming a carbon source in the eight years studied. With less vegetation due to deforestation and fewer healthy plants due to forest degradation and climate change, the trees perform less photosynthesis—the process that converts light and carbon dioxide into energy for plants, whose biomass is formed by organic carbon-based compounds, and releases oxygen into the atmosphere. With respect to climate change, photosynthesis decreases the amount of CO2 in the atmosphere by directing the carbon part of this greenhouse gas into the plants, where it remains trapped in their biomass until the vegetation is burned or dies and decomposes. When this occurs, the carbon returns to the air in the form of CO2.

The carbon balance of the Amazon was calculated from 513 vertical profiles of the region’s atmosphere. For the last eight years, a small plane has been taking off roughly once a fortnight from one of the four points where air samples are systematically collected: two in the east of the Amazon (Santarém and Alta Floresta), the region most impacted by deforestation, especially in its southern area; and two in the west (Rio Branco and Tabatinga), which is better preserved. The aircraft collects air samples along a descending profile, from 4.4 kilometers high to 150 meters above the ground. Each atmospheric profile is sent to the INPE’s Gatti laboratory, which quantifies the greenhouse gases, such as carbon monoxide (CO), methane (CH4), and CO2. Each sample represents not only the atmosphere of the point immediately below where it was collected, but of the entire route traveled by the air until it reached that region. Since air in the Amazon flows from the Atlantic Ocean in the east toward the inland west, the atmospheric profiles in the west contain compounds produced in the east of the rainforest as well as those from the local area.

The results of the study, which will still be detailed in a paper to be submitted to a scientific journal, are worrying because the Amazon acted as a carbon source at all four sample collection points. “In the east, the Amazon functions as a significant carbon source,” explains Gatti. “In the west, it is nearly neutral; almost all the carbon emitted is offset by what is absorbed.” The difference is essentially due to the differing conservation status of these two halves of the rainforest. “The greater carbon emission in the east is strongly related to the number of fires,” says chemist John B. Miller, from the Earth System Research Laboratory at the United States National Oceanic and Atmospheric Administration (NOAA), an international partner in the study, who presented the preliminary results at the AGU event in San Francisco.

It is not the first time a scientific study has shown that the Amazon is now a carbon source rather than a carbon sink. In an article published in the journal Nature in February 2014, Gatti, Miller, and their colleagues showed that in 2010, a particularly dry year, the region released more carbon than it absorbed, and in 2011, a wet year, emission was almost equal to absorption. The study used the same methodology as the current research, but covered a shorter time period. “Our results are consistent with a paper published in Nature a few years ago by R.J.W. Brienen, which examined data from a forest census and suggested that the Amazon’s role as a carbon sink was decreasing over time,” says biogeochemist Emanuel Gloor, from the School of Geography at the University of Leeds, UK.

In the study, led by Brienen’s colleagues from Leeds and with the participation of researchers from Amazonian countries, the scientists collected field data on biomass evolution in 321 areas of the rainforest over three decades. They found that during the 1970s and the early 1980s, the Amazon functioned as a carbon sink. The amount of vegetation grew, removing large amounts of CO2 from the atmosphere, possibly thanks to the so-called fertilization effect caused by high levels of carbon dioxide in the atmosphere (which may, theoretically, have stimulated greater vegetative growth). But with the increase in tree mortality, possibly due to climate change, the Amazon has become warmer and more prone to long droughts, decreasing the significance of this effect. In the past decade, the rainforest’s ability to remove carbon from the atmosphere was a third less than in the 1990s, according to the study.

Carlos Nobre, a climatologist at the Institute of Advanced Studies of the University of São Paulo (IEA-USP), believes the results produced by his colleague at INPE, where he has spent his entire career, show that environmental changes in the Amazon can occur at a faster rate than expected. “We projected that the region might become a carbon source 30 years from now,” explains Nobre, who did not participate in the study by Gatti and his colleagues. “But the southern Amazon already seems to be badly compromised, on its way to savannization.” The term savannization is used to describe the process through which areas originally composed of dense forests typical of humid tropical climates are replaced by areas of sparser vegetation, like savannas, characteristic of hot and dry climates. This change influences the carbon balance because rainforests remove significantly more carbon than savannas.

According to Nobre, the new data indicate that this is not an exceptional scenario reflecting a particularly dry year or a small part of the region, but a long-term trend. “Before, major droughts occurred in the Amazon every 25 years. We have now had three in the last 15 years, and the effects of this phenomenon last for years,” says the climatologist. During periods of severe drought, natural tree mortality increases and carbon absorption through photosynthesis falls. The vegetation thus removes less carbon dioxide from the atmosphere. To make matters worse, manmade fires and deforestation, which rose sharply in 2019, have reduced the original size of the Amazon by almost 20%. Among the commitments made in the Paris Agreement on climate change, Brazil pledged to eliminate illegal deforestation in the north of the Amazon by 2030.

In 2019, global emissions of carbon dioxide (CO2) from the burning of fossil fuels grew by 0.6% over the previous year. Activities involving oil, gas, and coal combustion were responsible for the release of 10.04 billion tons of carbon, a new record.

If emissions from volcanic activity and changes in land use (essentially due to deforestation) are added to that number, the total global CO2 emission for the year is 11.7 billion tons.

These estimates are part of the annual report produced by the Global Carbon Project, which is comprised of more than 70 scientists from 15 countries. The initiative has been producing and disseminating data on the planet’s carbon balance since 2001. The 2019 estimates, which were based on data from the first 10 months of last year, were released during the 25th UN Climate Change Conference (Cop 25), held in Madrid, Spain, between December 2 and 13. Further details and technical aspects of the projections were also presented in three articles published in scientific journals. “Current climate and energy policies are too weak to reverse trends in global emissions,” said climatologist Corinne Le Quéré of the University of East Anglia, UK, one of the lead authors of the paper.

The lower use of coal was highlighted as one of the factors behind the smaller increase in global emissions from burning fossil fuels in 2019 than in the previous two years. In 2018, the increase was 2.1%, and in 2017, 1.5%. In geographic terms, the release of CO2 by oil, gas, and coal combustion fell in the USA and Europe, but grew in China and India, the two most populous countries on the planet. According to consolidated data from the Global Carbon Project for 2009 to 2018, about half of the carbon dioxide released goes into the atmosphere, which worsens the greenhouse effect (see graphic above). The other half is absorbed by the oceans, making them more acidic, and by vegetation and soil.