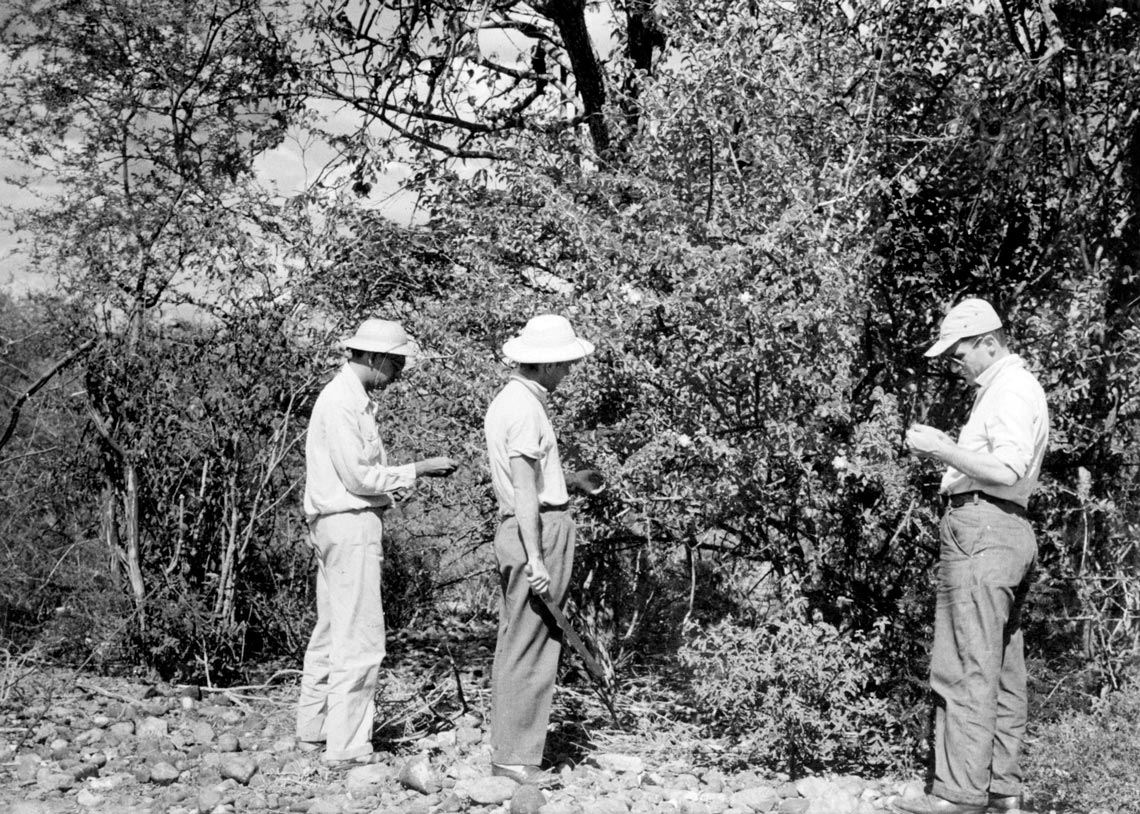 Beginning in the 1970s, chemist Otto Richard Gottlieb (1920–2011), in addition to identifying plant compounds and their roles, proposed—and proved—that plants became more able to produce complex chemical compounds as they evolved. His was an innovative approach, which brought chemistry closer to the evolutionary history of plants and brought him international recognition. Gottlieb was nominated for the Nobel Prize three times: in 1998, 1999, and 2000.

He expanded the research on the evolution of plants when he verified that herbs—recent species in evolutionary terms—produce sophisticated chemical structures like terpenoid indole alkaloids, while trees, which are more primitive, only go as far as phenolic derivatives, which form wood cellulose. “We were able to show that conifers [pines] and flowering plants had parallel developments and had their origins, respectively, in primitive and advanced ferns,” said Gottlieb in a 1988 interview with the magazine Ciência Hoje (Science Today).

“Gottlieb used to say that the identity of plants has more to do with their natural products, or secondary metabolites, than with the morphological aspects that guide traditional botanical classification. His theories formed the basis of Micromolecular Systematics, a course he created to show the importance of the chemical arsenal of an organism for its evolution, adaptation, regulation, and classification,” says pharmacist Vanderlan Bolzani, from the Institute of Chemistry at São Paulo State University (UNESP), Araraquara campus. 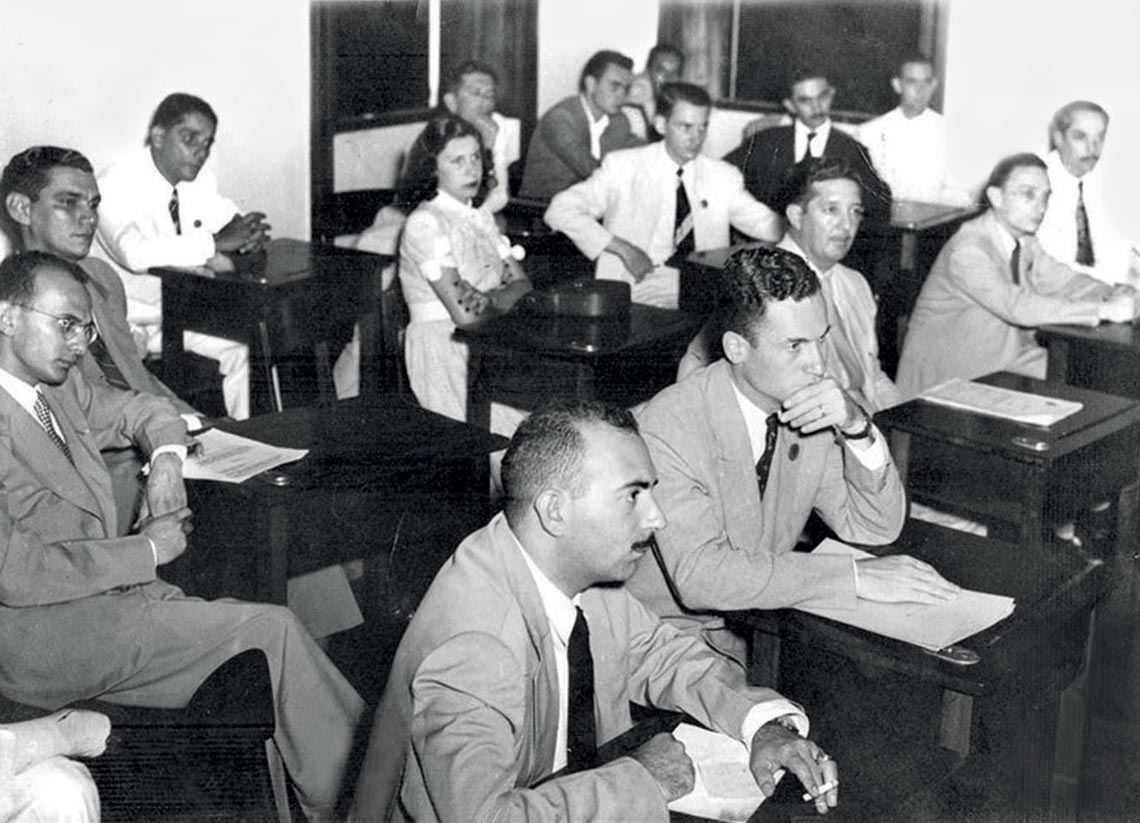 Gottlieb (with hand on his chin) at the 6th Brazilian Conference of Chemistry, Pernambuco, 1949Prof. Otto Richard Gottlieb Collection / IQ-USP

Bolzani obtained her master’s and PhD from the University of São Paulo (USP), with Gottlieb as her advisor. At UNESP, she dove deeper into his research and, over the last two years, has been advisor to PhD chemistry student Helena Russo, whose work consists of identifying the compounds in the leaf extracts of 140 species of the Malpighiaceae family. Next, based on Gottlieb’s precepts, Bolzani intends to associate the chemical compounds with the evolutionary tree of the plants in this group.

A Traveling Teacher
A lover of operas and operettas with a keen ear for music, Gottlieb was “a travelling teacher,” as defined by chemist Paschoal Senise (1917–2011), who asked him to establish the Laboratory of Natural Products, initially funded by FAPESP, at the newly-formed USP Chemistry Institute (IQ), after leading busy personal and professional lives. 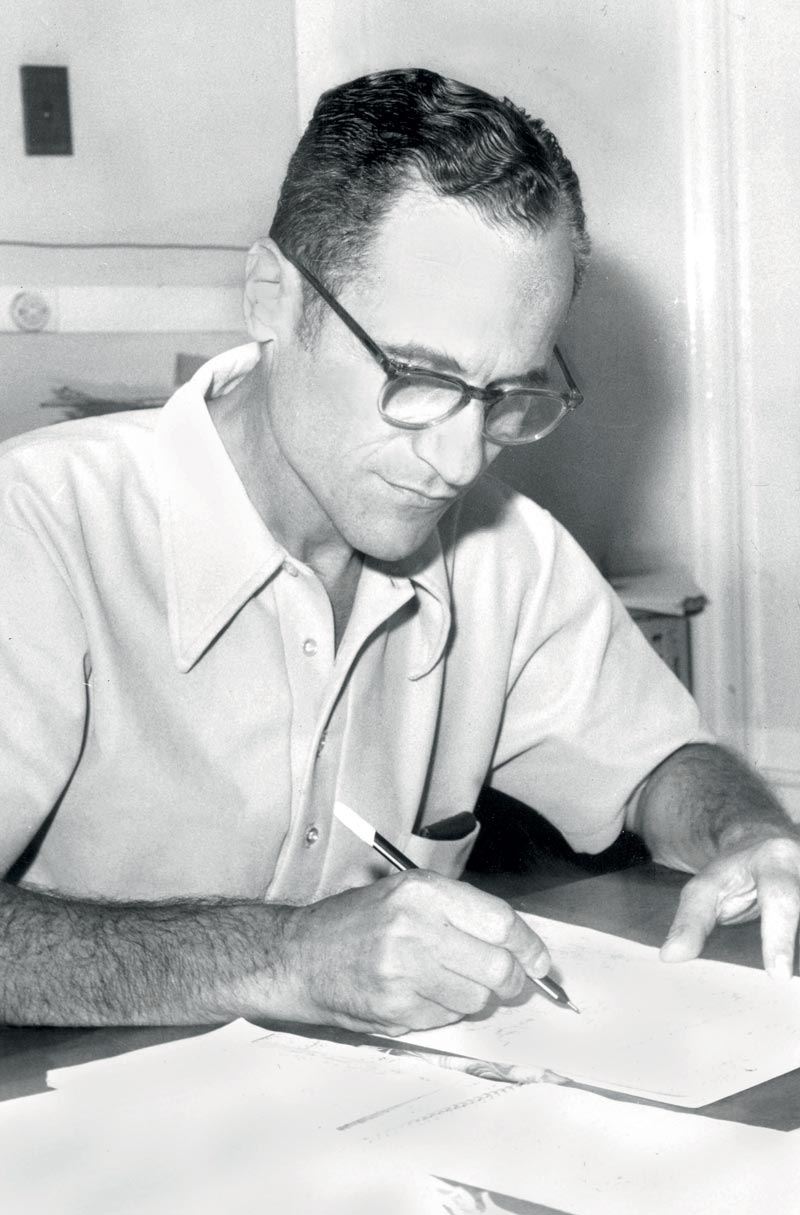 Prof. Otto Richard Gottlieb Collection / IQ-USPGottlieb was born in Brno, Czech Republic. In 1936, in the face of the persecution of Jews during the Nazi regime and the death of his paternal grandfather, who owned a coffee exporting company based in Brazil, his parents moved to Rio de Janeiro and he went to study in England. Three years later, he also moved to Rio at the recommendation of his parents, who were concerned about the war in Europe. As his mother was Brazilian, he was able to choose his nationality when he turned 21, and he preferred to be Brazilian.

In 1945, with a degree in industrial chemistry from the then-called University of Brazil, now known as the Federal University of Rio de Janeiro (UFRJ), he went to work with his father in the family company, which produced raw material for perfumes using essential oils from Brazilian plants. After the company shut down in 1959, he was left with his job at the Agricultural Institute of Chemistry (IQA) with the Ministry of Agriculture, where he had worked since 1955. One of his first tasks at the institute was identifying the chemical compounds of rosewood, the main raw material used at his father’s factory.

“Since the beginning of his research work, he wanted to understand the role of chemical substances in plants,” shares pharmacist Maria Renata Borin. She obtained her master’s and PhD from USP under his advisory, worked with him for 30 years in São Paulo and Rio, and cares for Gottlieb’s private library—containing about 2,000 books and 100 collections of scientific journals, as well as documents and photos—donated by the family to IQ-USP after his death.

Shortly after joining the IQA, Gottlieb completed an internship at the Weizmann Institute in Israel and learned the technique of nuclear magnetic resonance spectroscopy, which differentiates compounds through the magnetic properties of their atomic nuclei. To spread the new technique, he wrote two books in Portuguese and taught courses around the country. At the same time, he formed research groups at the National Institute for Research in the Amazon (INPA) and at the Federal University of Minas Gerais (UFMG).

The IQA closed in 1962. Two years later, Gottlieb moved to the newly formed University of Brasília (UnB), where he established the Central Institute of Chemistry and formed a research group with the best students he had met throughout the country. “He used to say that UnB had a unique university environment, because it was small and you could easily talk to colleagues from other areas,” relates Borin. Gottlieb left UnB a year later, in 1965, in solidarity with teachers who resigned in collective protest against the persecution by the military government. “The sky was falling around me,” he said to Borin years later at USP. 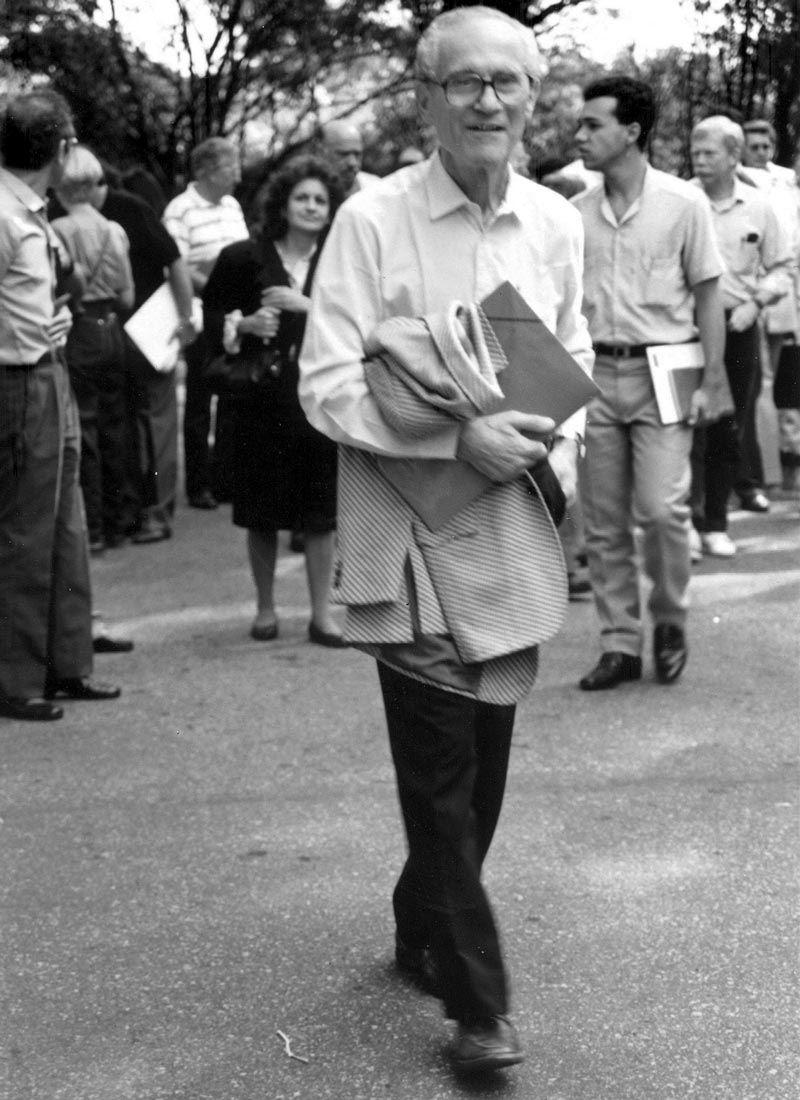 At USP, in 1990, when he retiredProf. Otto Richard Gottlieb Collection / IQ-USP

After Brasília, Gottlieb returned to Rio and joined the Federal Rural University of Rio de Janeiro, at the invitation of a professor who had known him since his time in the IQA. But he did not stay long, because Senise soon asked him to work in São Paulo. The IQ-USP was his longest place of employment: from 1967 until his retirement in 1990, at the age of 70.

Evolutionary Indexes
To quantify the diversification of substances, Gottlieb created evolutionary chemical indexes: the oxidation index measures the average amount of oxygen atoms in the substances produced by a plant; the skeleton specialization index assesses the complexity of chemical structures; the herbacity index indicates the evolutionary degree of a plant according to its shape; the taxonomic singularity index records the genetic variability in a given area; the micromolecular profile represents the set of substances produced by a species; and the species dominance pattern indicates demographic affinities between habitats and connectivity between biomes.

In the 1980s, he established the annual meeting on Micromolecular Evolution, Systematics, and Ecology (RESEM), which featured lectures by physicists, mathematicians, and linguists to open the minds of the attendees. In 1986, Norberto Peporine Lopes was in his first year of pharmacy at USP when he was a monitor at one of these meetings and projected the presentation slides of the professor—already famous at that time. “He was considerate of everyone; very gracious.”

In 2010, Lopes was already a professor at the University of São Paulo Ribeirão Preto School of Pharmaceutical Sciences (FCFRP) when, along with colleague Leonardo Gobbo Neto, he was reminded of Gottlieb’s ideas when examining the chemical profile of arnica (Lychnophora ericoides) leaves from high areas of the Cerrado (wooded savanna), called rupestrian fields, and a transition area—an ecotone—in Minas Gerais. As Gottlieb had predicted in his “edge theory,” the plants of the ecotone, which faced predators from the two neighboring environments, had a varied chemical profile and produced about 50 times more sesquiterpene lactones, which are toxic to insects, than plants in the Cerrado rupestrian fields. 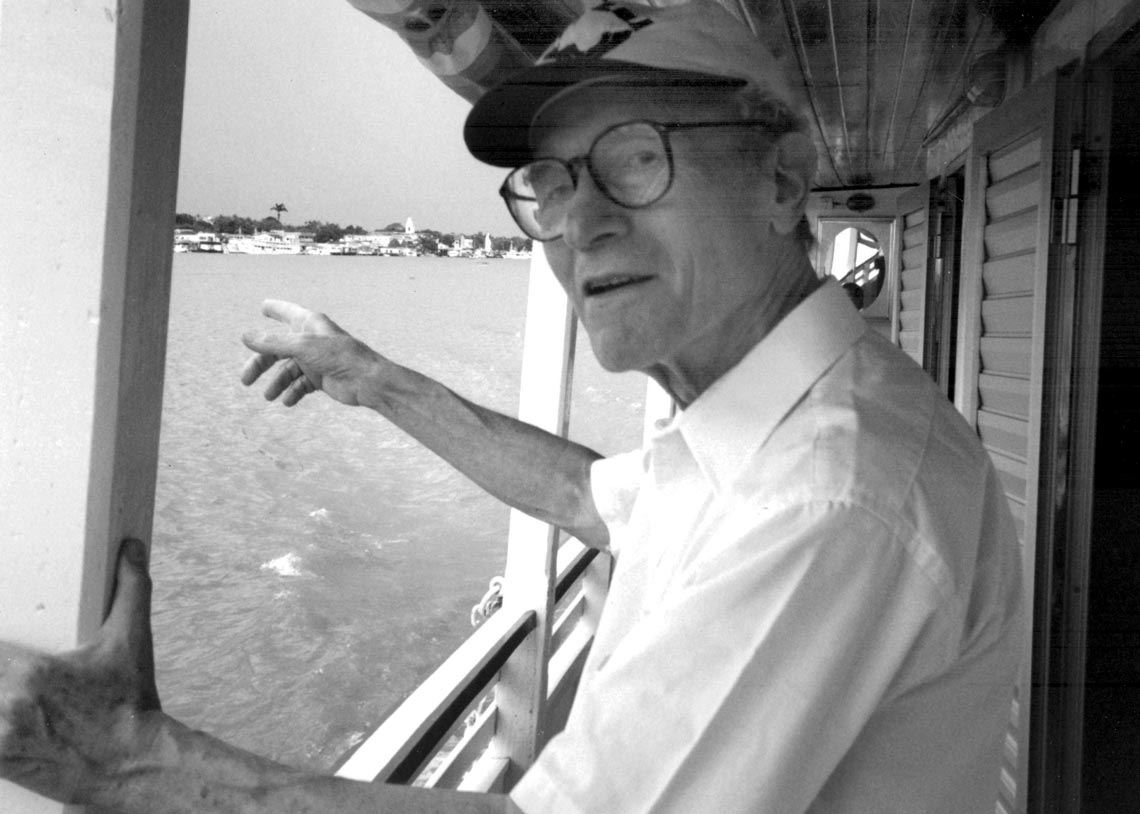 On a trip to the Caxiuanã Forest, in Pará, 1999Prof. Otto Richard Gottlieb Collection / IQ-USP

Today, Lopes applies these ideas to other groups of living beings. In a paper in which he was featured, under the coordination of his colleague Letícia Lotufo, the cnidarians (marine invertebrates) Palythoa caribaeorum from the warm coastal waters of the Northeast had a more complex chemical profile than the same species in the colder waters of the South. “Much like Gottlieb had proposed for plants, marine organisms in the Northeast incorporate more oxygen into carbon skeletons, which probably increases their resistance to solar radiation or generates some other adaptation that we have not yet been able to explain,” says Lopes.

After retiring from USP, Gottlieb returned to Rio, where his family lived, and he worked at the Oswaldo Cruz Foundation [FIOCRUZ], at the State University of Rio de Janeiro [UERJ], and at Fluminense Federal University [UFF]. He has never been forgotten nor lost his modesty. “Every single time he was nominated for the Nobel Prize, he asked me: ‘Do you think it’s a joke?,’” reports Borin.