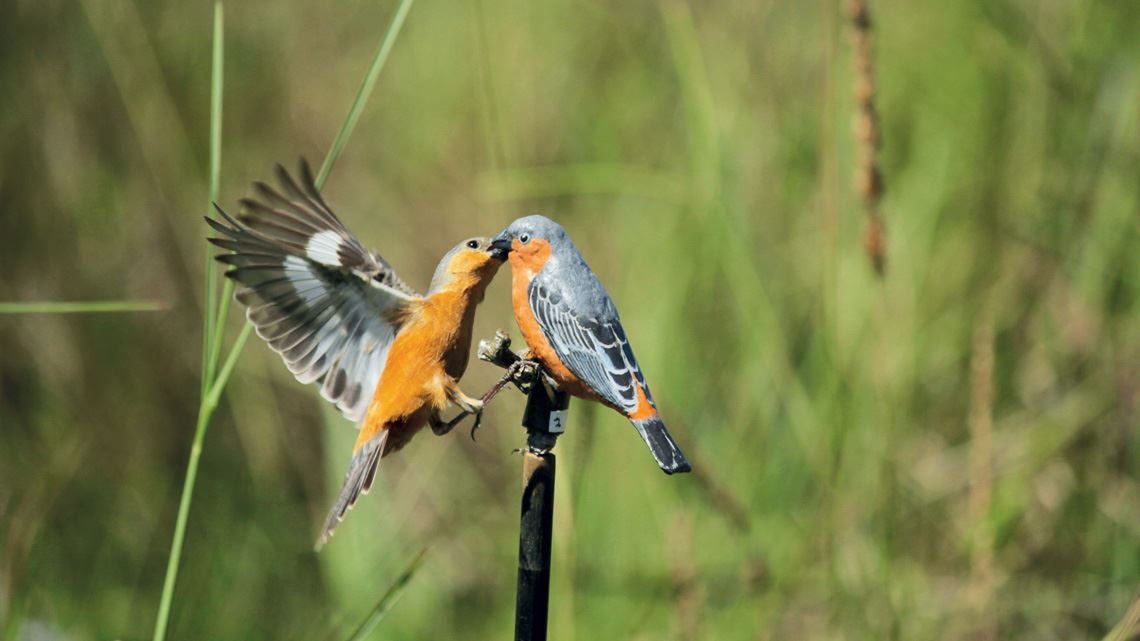 A male tawny-bellied seedeater, which shares its habitat with the Ibera seedeater, seen attacking a wooden decoy mimicking its species

Eduardo Geraque with contributions from Marcos Pivetta
Issue # 303
may. 2021
BiologyEvolution

Speciation is a term used in evolutionary biology to refer to the process by which a new species emerges in a group that has isolated itself from other members of an ancestral population and has evolved unique traits. In most cases, this process is a relatively slow one, occurring over many generations and thousands or even millions of years. The formation of a new species typically happens after individuals become geographically isolated from their original population, and the two groups lose their ability to exchange genetic material and generate viable offspring with each other. But in some circumstances, new species can form before a group of individuals becomes physically separated from, or genetically incompatible with, its ancestral population.

A study published March 25 in Science suggests that the emergence of minor physical or behavioral traits, such as distinctive plumage or song patterns, is sufficient to stimulate the emergence of new species of capuchino seedeaters, a group of small birds of the genus Sporophila that includes more than 40 species occurring primarily in open-field environments in South America. Capuchino seedeaters are about 10 centimeters long, weigh less than 10 grams, and are appreciated for their beautiful song.

The study, conducted by an international team of biologists and ornithologists, found that two species in this group—the Ibera seedeater (Sporophila iberaensis) and the tawny-bellied seedeater (Sporophila hypoxantha)—share the same habitat (the north portion of Esteros del Iberá, a wetland area in central Argentina), have nearly identical genomes, and are able to produce fertile hybrids, as demonstrated in captive breeding experiments. They have neighboring nesting territories, breed in the same season, and forage together on the same grasses. Yet, based on experiments in the field and genetic analyses, females nearly always mate with males of the same species and avoid suitors of the neighboring species. In the study, researchers analyzed the DNA of 37 male and female individuals of the two species.

According to the authors of the paper, females discern the species of their mating partners by their plumage coloring and song. Over time, this sexual preference is believed to have caused the two seedeater species to diverge. “The study shows that species can emerge and diverge rapidly through variation in traits such as plumage and song; it also indicates that genetic separation can take much longer to arise,” says Luís Fábio Silveira, curator of the ornithology department at the University of São Paulo Zoology Museum (MZ-USP) and one of the authors of the paper. Silveira is currently heading a FAPESP-funded research project to study species endemic to Atlantic Forest patches in the Northeast, including several seedeater species. “Morphological and behavioral isolation occurs long before genetic isolation does, and this could be a major factor in the emergence of new species.”

Three key criteria are currently used to discern new bird species: morphology, genetic material, and song. For some authors, a difference in one only one of these parameters is sufficient to claim the existence of a new species, while others are more conservative and will only make such claims when at least two parameters differ.

Appearance-wise, male and female seedeaters have a several distinctive traits. The females of all species, and not only the two species studied in Argentina, are quite similar in outward color, with a darker back and a lighter belly, in shades of olive. Conversely, the males of each species typically have very distinctive plumage colors. The Ibera seedeater, for example, has very light-colored plumage on the belly, in stark contrast to the orangish belly plumage of the tawny-bellied seedeater.

Working with Argentine evolutionary biologist Leonardo Campagna at the Ornithology Laboratory at Cornell University, Silveira has extensively researched the origin and process of speciation in seedeaters (see Pesquisa FAPESP issues 236 and 256). “This group of birds is peculiar in the way its different species are genetically similar. They are at the early stages of speciation and this allows us to focus on the areas of the genome that are different and likely accountable for the emergence and evolution of the different species,” says Campagna, who led the study on the Ibera seedeater and tawny-bellied seedeater. The DNA of these species is 99.9% identical. Only 12 genes have different sequences, three of which are involved in plumage coloration. “Most known bird species have been evolving separately for a long time and have so many differences among them that it is very difficult to tell which were important to early speciation,” notes Campagna.

Sheela Turbek, a behavioral ecologist and PhD candidate at the University of Colorado Boulder, and the lead author of the recently published paper, conducted a series of behavioral field experiments over a period of three years in Esteros del Iberá, compiling valuable data about the sexual behavior of the two seedeater species in the wild. She created bird decoys mimicking male Ibera, tawny-bellied, and rusty-collared seedeaters (Sporophila collaris, a species whose plumage color is intermediate between that of Sporophila iberaensis and Sporophila hypoxantha). She set up the decoys in a study male’s territory, and alternately played recordings of the songs of Ibera and tawny-bellied seedeaters. Over the three years of fieldwork, she observed the reactions of 76 real males of the two species (36 Ibera seedeaters and 40 tawny-bellied seedeaters) to what they thought were competitors.

The Ibera seedeaters were more aggressive when they recognized their own song and encountered a decoy mimicking a male of their own species—a potential rival in courting females—but largely ignored the decoys mimicking tawny-bellied seedeaters, likely because they did not see them as competitors. When they encountered decoys mimicking the rusty-collared seedeater, which has intermediate plumage coloration and was used in the experiment to represent a hybrid between the other two species, the reaction was less marked, ranging from some degree of aggression to disinterest. Male tawny-bellied seedeaters exhibited the same behavioral patterns when confronted with decoys mimicking the three seedeater species.

For Erich D. Jarvis, a biologist at Rockefeller University’s Laboratory of Neurogenetics and Language, it is difficult to tell whether females’ sexual preference for males that produce a given song pattern is a purely cultural choice, or both cultural and genetic. “Songbirds are one of the rare groups of species that have vocal learning, the ability to imitate sounds and culturally pass them on from one generation to another,” Jarvis wrote in a commentary on the seedeater study also published in Science. “The findings of Turbek et al. prompt the question of how widespread this pre-mating mechanism of speciation might be. Perhaps it can give rise to local population differences within a species.”