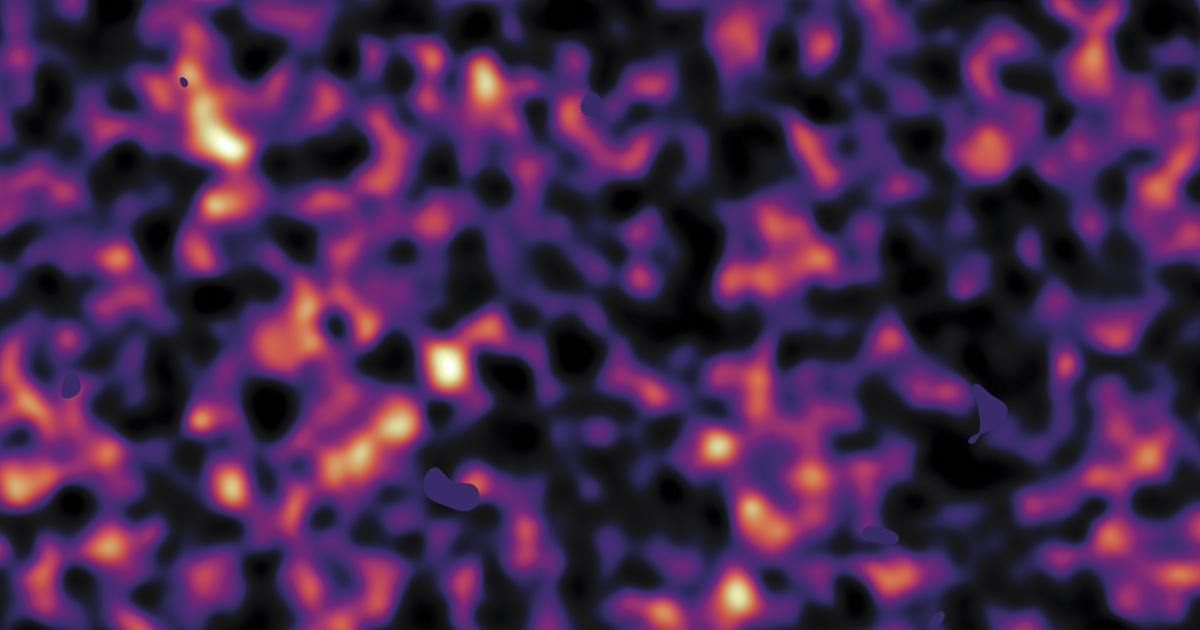 Composite image of a section of the Universe equivalent in size to 420 full moons, in which dark matter (pink/purple) appears around normal matter (yellow). The black background represents empty space

Over the last three decades, the search for dark matter, one of the great mysteries of our universe whose gravitational pull may be responsible for maintaining the formation of galaxies and galaxy clusters, has produced inconclusive results. Several structures and particles—some already known, such as primordial black holes and neutrinos, and others that are strictly theoretical—have been suggested as the possible components of dark matter, which makes up about a quarter of the known universe, but none of them have yet been proven. The most widely accepted proposal at this time—and the most tested, in dozens of international experiments—is that dark matter is formed of weakly interacting massive particles (WIMPs), which are hypothetical particles formed in the early stages of the universe that interact weakly with each other and normal matter, and whose mass is equal to or greater than that of a proton, possibly by thousands of times. Since no one knows exactly how heavy WIMPs may be, scientific experiments look for new particles in various mass ranges. Every time the existence of WIMPs with certain characteristics is ruled out, the search window becomes smaller.

A study led by Ivone Albuquerque, from the Institute of Physics at the University of São Paulo (IF-USP), has just made the potential mass range of WIMPs a little narrower. Based on data from 530 days of observation conducted by the international collaboration DarkSide-50, which operates an underground detector at the Gran Sasso National Laboratory in central Italy, the research recorded no evidence of particles with masses between 1.8 and 6 gigaelectron-volts (GeV), whose frequency of interaction with the equipment is well established. As a comparison, the mass of a proton is roughly 1 GeV. Of all the initiatives searching for WIMPs, such as the Large Underground Xenon experiment (LUX) and the Cryogenic Dark Matter Search (CDMS), both based in the US, XENON100 is the only other experiment that has looked for particles with the same characteristics as those studied by DarkSide-50. But the data from this experiment is far more comprehensive than that provided by XENON100, says Albuquerque. “It was a surprising result,” comments the physicist, who coordinates Brazil’s participation in the international collaboration, which brings together some 150 researchers from eight countries. “Our DarkSide-50 detector in Italy is small and was not intended to record such light particles. We usually look for WIMPs with masses between 10 and 100 GeV.” The results were detailed in a paper published on arXiv by the international collaboration on February 20 and presented at an international meeting on dark matter held at the University of California, Los Angeles (UCLA).

The universe is composed of roughly 25% dark matter, 70% dark energy, and just 5% normal visible matter, also known as baryonic matter. Most physicists believe that dark matter is responsible for maintaining the structure of galaxies, which spin so fast that if they were composed only of normal matter, they would have dispersed a long time ago. The visible components of the cosmos alone do not generate enough gravity to hold entire galaxies together. There must be some form of matter that does not interact with light and which has a much greater gravitational effect than that of the visible elements of these galaxies. This unknown component has become known as dark matter. “The particles of dark matter pass through us,” says Argentine physicist Graciela Gelmini, from UCLA, who studies candidates for dark matter. “They move all over the galaxy at speeds of 300 kilometers per second (km/s).”

The speed at which dark matter moves eliminates some possibilities and restricts the types of particles that it could be made of. Most cosmological models predict that dark matter is cold, or possibly warm. “The existence of hot dark matter was ruled out by cosmological observations,” explains physicist Rogerio Rosenfeld, from the Institute of Theoretical Physics at São Paulo State University (IFT-UNESP). Whether dark matter is hot or cold is linked to the speed of the mysterious particles. For dark matter to be hot, it would have to be moving at relativistic speeds close to that of light, at about 300,000 km/s, while if it was cold, it would move at a much slower rate. “But if dark matter moved at relativistic speeds, baryonic matter would not have merged and given rise to the distribution of galaxies and galaxy clusters that we know,” says Rosenfeld, who participates in the Dark Energy Survey (DES), an international study that aims to map the visible structures of the universe, such as galaxies and stars.

In January this year, the online version of scientific journal Monthly Notices of the Royal Astronomical Society published the largest map of the universe’s matter to date, created by DES researchers using weak gravitational lensing, a technique that allows scientists to infer the presence of dark matter from small distortions in the trajectory of light from distant galaxies. “We saw the deformation caused in the images of these objects,” explains physicist Flávia Sobreira, from the University of Campinas (UNICAMP), who participates in the DES and is one of the authors of the paper. “The data reinforces the belief that dark matter is cold.” The survey mapped images of 26 million galaxies visible from the southern hemisphere, each of which is surrounded by a dark matter halo. This observational data of the universe is not intended to identify what dark matter is made of, but to provide important parameters that could help to guide the search. According to Rosenfeld, recent studies suggest that the lowest possible mass of warm dark matter, considering the known distribution of visible matter in the cosmos, would be about a million times smaller than the mass of a proton, to the order of 5,000 electron-volts (eV). WIMPs could not be that light, but sterile neutrinos, a hypothetical type of elemental particle, could have such small masses. The problem is that there is no evidence that these neutrinos exist. The search for the essence of dark matter is therefore almost entirely dependent on the search for WIMPs.

In 1998, an Italian group announced that it had found dark matter, but the discovery was never confirmed

Interaction with two forces
The prevailing cosmological models theorize that if dark matter is made up of WIMPs, then the mass of these particles must be at least 100 times greater than a proton. The problem is that physicists have spent more than 20 years looking for particles around this mass range and have so far found nothing. More recently, models have begun to consider the possibility that dark matter could be composed of WIMPs with masses lower than 10 GeV. Some experiments, such as the DarkSide-50, which was designed to discover WIMPs with masses over 10 GeV, are now looking for such lighter particles. The most accepted theories about WIMPs estimate that these particles interact with each other and normal matter through just two of the four forces of physics: gravity and weak interaction (linked to processes of decay of the atomic nucleus). They likely feel no effect of electromagnetism or strong interaction.

In operation since 2013, the DarkSide-50 detector has a chamber filled with 50 kilograms of liquid argon. Alongside xenon and germanium, argon is one of the most used elements in underground detectors searching for WIMPs. The devices are capable of detecting flashes of light produced by particle collisions where the nucleus contains the same element as the equipment. “Xenon is more widely used, but argon costs about 400 times less, making it cheaper to build detectors,” says Albuquerque. The DarkSide project, which is jointly coordinated by the Italian National Institute for Nuclear Physics and Princeton University, USA, plans to install a new, more powerful detector containing 20 tons of argon by 2021.

The equipment is built underground to prevent dark matter signals from being confused with interference from space or the atmosphere. In just one location in the world, 1,400 meters below the Gran Sasso mountains in Italy, there are six independent studies run by different research groups looking for candidate dark matter particles: XENON100, SABRE, DAMA, CRESST, COSINUS, and DarkSide.

The search for WIMPs can also occur indirectly. This is the case with the IceCube project, coordinated by the University of Wisconsin-Madison, USA, which aims to study neutrinos, a type of elementary particle with close to zero mass produced by high-energy astronomical events. The project uses a network of underground detectors spread across a 1-kilometer block of ice in Antarctica, near the South Pole. The IceCube project is capable of detecting neutrinos produced in possible interactions between WIMPs and the sun. As with all the other experiments, nothing significant has yet been found.

The most spectacular news about dark matter so far was discovered by the DAMA experiment. In 1998, physicists at the University of Rome Tor Vergata announced that they had identified a WIMP with a mass of around 10 GeV that could be dark matter. The Italian researchers reportedly recorded a seasonal signal, whose peak appeared around the beginning of June, using a detector based on thallium-activated sodium iodide crystals, a technology different from that adopted in most experiments. The signal fluctuates due to the earth’s orbit, which passes through a dark matter “wind” that flows in opposite directions depending on the time of year.

No one, however, has ever been able to reproduce the results obtained by DAMA, which continues to function today with new detectors. Physicist Nelson Carlin Filho, from IF-USP, is taking part in the South Korean experiment COSINE-100, which began collecting data in September 2016. The initiative uses the same detection technology as DAMA and will attempt to confirm or refute the results of the Italian project. “It will be two years before we start seeing the first results,” Carlin Filho says.