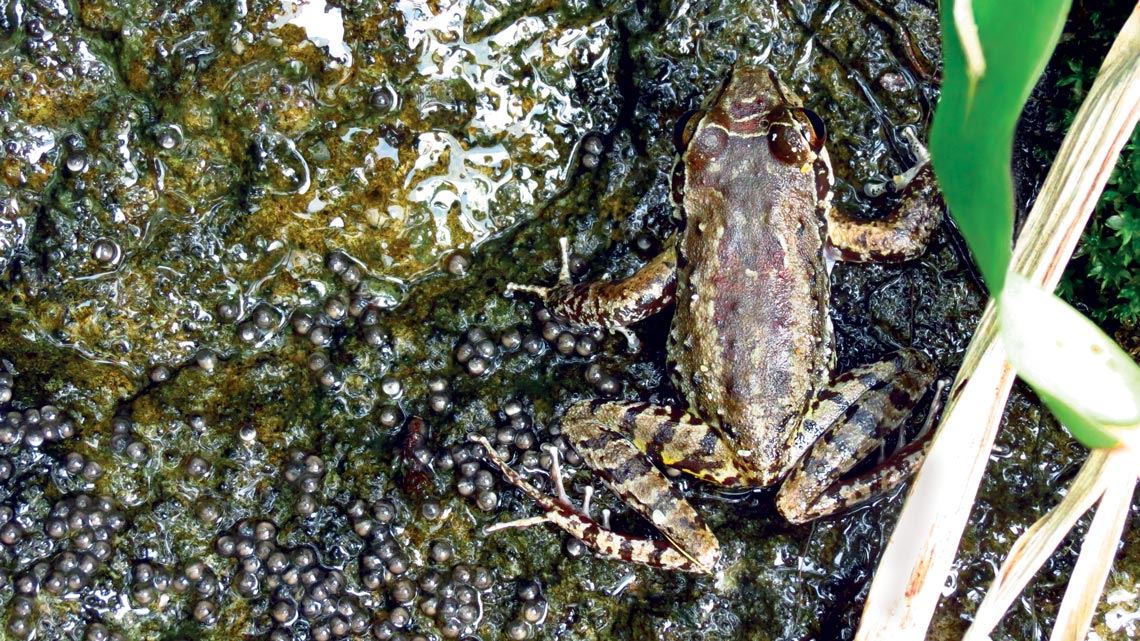 Male saxicolous frog protecting spawn on Sununga beach in Ubatuba, on the coast of São Paulo

Frogs often breed in pools of water: the males sing to attract the females, who spawn their eggs in the same location, giving the tadpoles the water they need to thrive. In most species, the tadpoles live alongside their half-siblings from the same father, the result of a succession of females visiting the male’s territory. Researchers from the Rio Claro campus of São Paulo State University (UNESP) expected to see the same behavior when observing saxicolous frogs (Thoropa taophora) that reproduce in seeps of water on rocky outcrops between the forest and the beach in Ubatuba, on the São Paulo coast. But they were surprised to find otherwise.

“Tadpoles at different stages of development were also related on the mother’s side, suggesting that the females remain in the pool during the entire 10-month reproduction period,” says biologist Célio Haddad, leader of the UNESP group. “This is the first amphibian species to demonstrate this behavior, which has already been seen in vertebrates, such as reptiles, birds, and mammals.” Zoologists did not find tadpoles fathered by the same male in neighboring seeps, reinforcing the idea that each male defends its own pool of water and thus remains faithful to its reproductive partners.

Videos recorded over 53 nights revealed other behaviors that distinguish the saxicolous frog from other species. “The males aggressively dispute these seeps, embracing intruders and trying to throw them out in a circular motion, like a sumo wrestler,” says biologist Fábio de Sá, lead author of an article published in the journal Science Advances on August 12. “At the same time, they stab their rivals with spines in their thumbs.”

“The idiosyncrasy of the species seems to be linked to the scarcity of these pools of water: the beach where we conducted the study is about 300 meters long and has just eight small seeps, each dominated by one male, with space for two or three females,” says Haddad. The need to physically fight for control of their territory explains why the males are larger than females, at 7 centimeters (cm) and 6 cm respectively. In most frog species, the females are larger.

Biologist Glauco Machado of the University of São Paulo (USP), who specializes in arachnids with similar reproductive systems, says there are three simultaneous reasons why female saxicolous frogs remain in one single pool of water. “The male chooses the best location, he takes good care of his offspring, and the female prefers not to take the risks of moving elsewhere,” he explains.