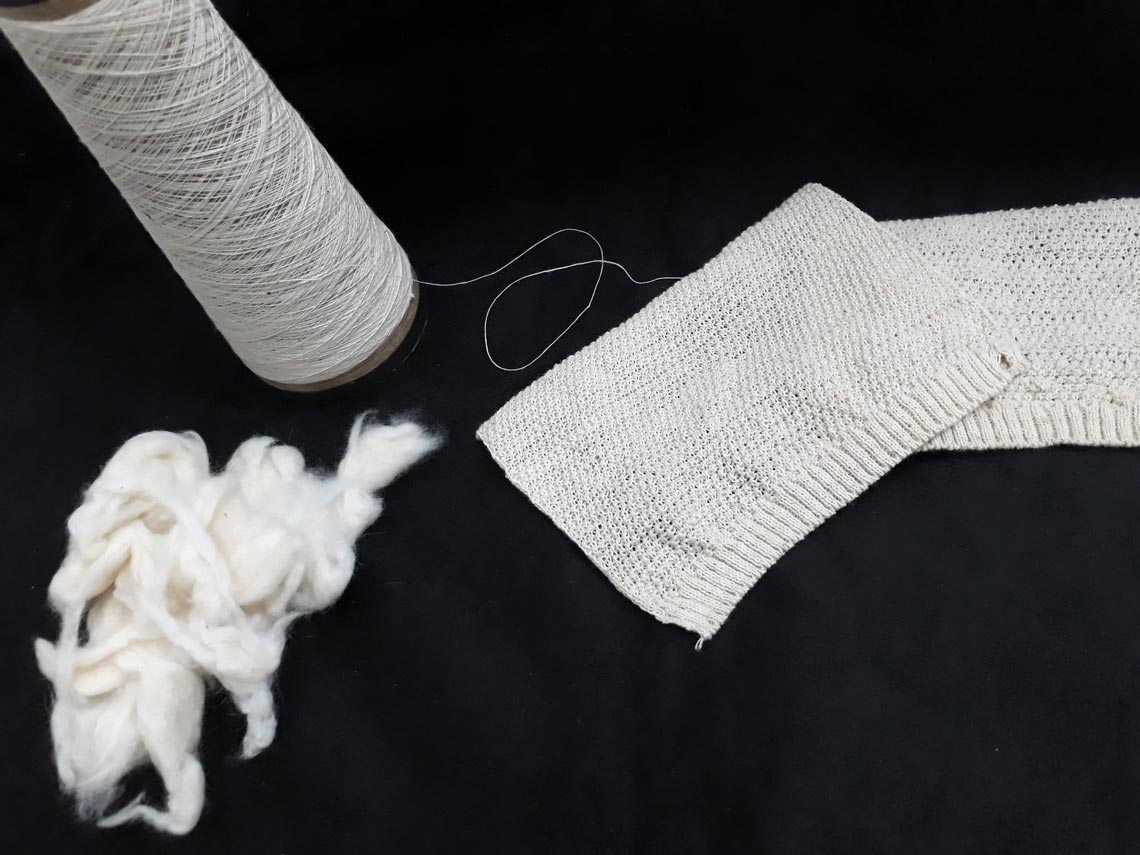 Samples of cashmere fibers, threads, and fabric made in Brazil

In a few years, Brazil may be able to enter the global market of raw materials valued by the textile industry. This includes cashmere, a very fine natural fiber that is light, soft, and, at the same time, strong and resistant. Produced using goat hair, it provides comfort and thermal insulation, protecting from both the cold and the heat. One kilo of fiber is worth US$160 (close to R$630) on the international market, according to the data site Emerging Textiles. Last year, China led the manufacturing of the raw material with 15,000 tons (t), close to 60% of the total, followed by Mongolia, with 6,000 t.

The entry of Brazilian producers into this market will be the result of research carried out over the past seven years by zootechnician Lia Souza Coelho, an employee of the Brazilian Center for Physical Research (CBPF), based in Rio de Janeiro. During her master’s at the Federal Rural University of Rio de Janeiro (UFRRJ), she discovered that it is possible for Brazil to produce a cashmere fiber that is even finer and more comfortable than what is available around the world—the finer the material, the greater the softness to the touch and the higher the fabric value. Now, the scientist is working to create a supply chain for Brazilian cashmere.

Fabrics made of this fiber have been produced for centuries in Kashmir, a northern region of the India subcontinent, in China, and in Nepal, through the summertime removal of the undercoat (lower layer of hair) of goats of the Cashmere breed (Hircus laniger)—this undercoat is essential for the animals to face the winter in the Himalayas. The work of Souza Coelho began when a goat breeder from Rio donated to UFRRJ some Boer goats, native of South Africa but introduced to Brazil some time ago—the breeder did not like how ugly the animals were and the fact that they were covered in tangled hairs and an excess of fine fibers.

› It is the undercoat of goats, male or female of any age
› The average thickness of the fiber cannot exceed 19 micrometers (µm)
› The producing animals can be of various breeds. In the past, the original fiber was collected from the Cashmere breed, which is what gave it its name

“No one knew what that kind of hair was,” recalls the researcher. “I analyzed the material under a scanning electron microscope, studied about fibers that come from animals, and discovered that the goat fibers were cashmere,” she comments. However, it was not a common cashmere fiber.

In order to be classified as such, the fiber needs to be up to 19 micrometers (µm) thick. Very new goat fibers are on average 14 µm. This is what is called baby cashmere, which is bought and sold directly between producers and international high-end clothing manufacturers; their prices are higher than normal and are not disclosed. For name brands, such as the Italian brands Brunello Cucinelli and Loro Piana, a baby cashmere sweater is sold for €2,500 (about R$11,000). The cashmere fiber obtained from Brazilian goats has a thickness that measures between 10 and 12 µm. “The intense radiation of the sun in Brazil has likely contributed to the appearance of cashmere with the finer characteristic of the Brazilian goats,” explains Souza Coelho.

According to Júlia Baruque Ramos, professor of the bachelor’s program in textiles and fashion at the School of Arts, Sciences, and Humanities at the University of São Paulo (EACH-USP), cashmere is a noble material by virtue. “There is demand for high-quality fibers, that is, finer fibers. Brazil could be a potential exporter of this type of cashmere,” she adds. 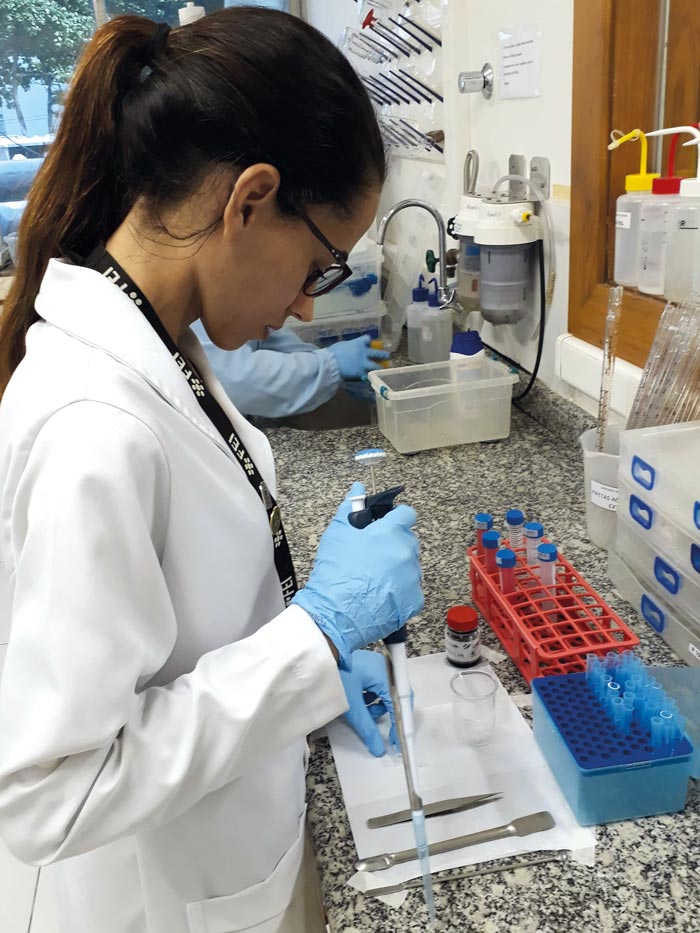 The research of Souza Coelho verified that, in addition to the Boer goats, animals of the breeds Saanen, Alpine, American Alpine, and Savanna—all of which originated in other countries but have adapted well in Brazil—as well as blends of these breeds, also produce the fiber. During her doctorate, which she finished in 2018 at UFRRJ, Souza Coelho produced the first prototypes of the thread and fabric of Brazilian cashmere. She also concluded that the Brazilian fiber uses less water during processing, generating a savings of 98% in comparison with conventional production methods. This is due to the intensive form of breeding on Brazilian farms, which contributes to obtaining cleaner fibers and thus eliminating the initial washing step—in Asia, the animals are bred in the mountains and are exposed to rain and snow.

With the support of the Brazilian Association for the Textile Industry and Manufacturing (ABIT), the Center for Technology of the Chemical and Textile Industry of the National Service for Industrial Learning (SENAI CETIQT), and Brastema, the Brazilian representative of the Japanese manufacturer for textile equipment, Shima Seiki, the study resulted in a book, an article, and five pending patents with the National Institute of Industrial Property (INPI)—another nine are being prepared for deposit. The studies were carried out in the laboratories of CBPF at São Paulo State University (UNESP), Araraquara campus, and of the National Institute for Industrial Technology (INTI) in Argentina. “INTI has experts and equipment to carry out the physical testing of the cashmere fiber using internationally recognized standards, which is something that unfortunately does not exist in Brazil,” comments the scientist.

Supply chain
Souza Coelho now has a team of collaborating researchers from CBPF, under the supervision of André Linhares Rossi, and she leads the Brazilian Cashmere Project, which seeks to establish a local supply chain for the textile raw material. The initiative has already been presented to the Brazilian Ministry of Agriculture, Livestock, and Supply (MAPA) and to the government of Paraíba, the state with the highest concentration of goat stocks. At the same time, the project team is working to demonstrate the potential for Brazilian cashmere to breeder associations. 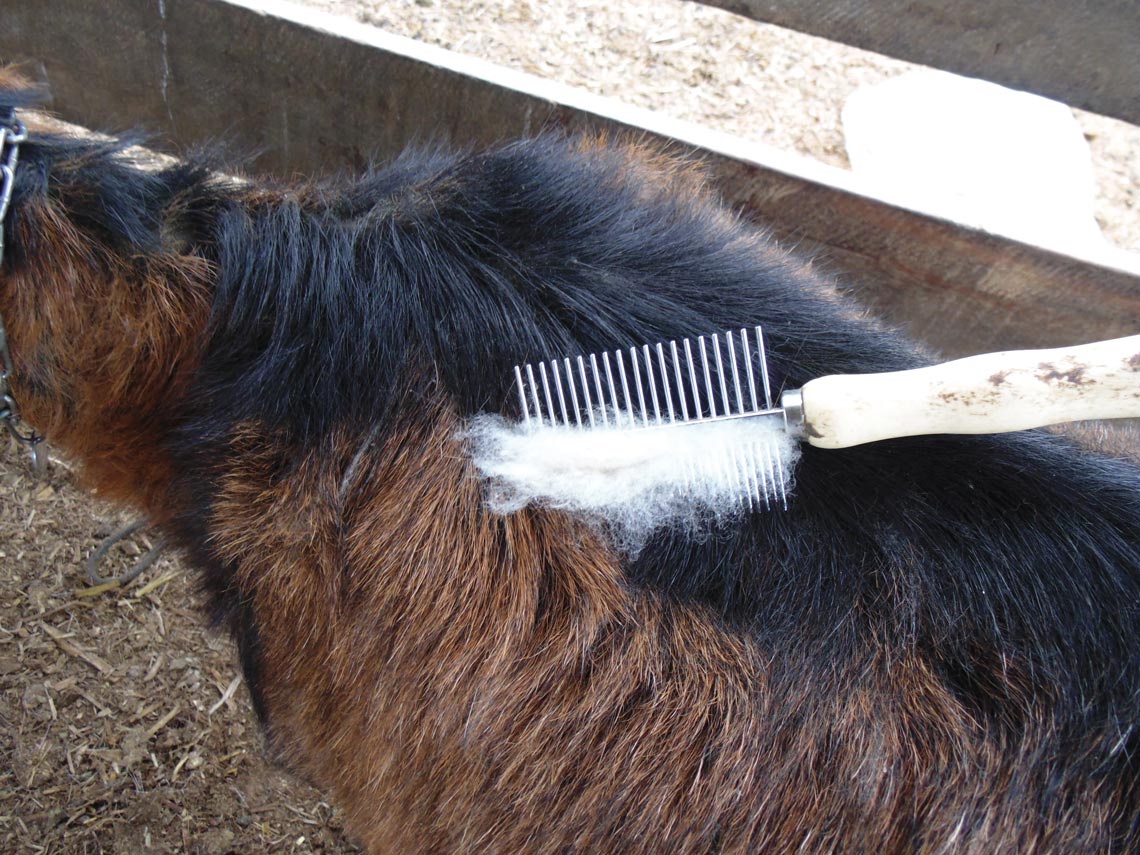 Zootechnician Lia Coelho during the lab analysis of fibers

The most recent Agricultural Census produced by the Brazilian Institute of Geography and Statistics (IBGE) reports that the country’s goatherds totaled 8.2 million animals in 2017, with 90% in the northeastern region. The primary sources of revenue for goat breeders are meat and milk production. In January of this year, breeders earned about R$190 for the sale of each live animal for slaughter, according to a survey by the Brazilian Agricultural Research Corporation (EMBRAPA).

Each Brazilian goat produces close to 217 grams of cashmere fiber per year. According to Souza Coelho, preliminary discussions with potential interested parties indicate an average price of about R$1,137 per kilo of Brazilian fiber, higher than that of the raw material on the international market due to the superior quality. If this price is confirmed, the collection of the fiber could increase annual revenues for the breeders by R$247 per animal. This is not the only advantage. The removal of the fiber is done by brushing, and only during the periods when it comes off of the animal on its own. “The brushed goats have increased milk production and experience less thermal stress,” reports the researcher.

According to Júlia Baruque Ramos, of EACH-USP, Brazilian cashmere may be valued on the high-end international market not only because of its quality, but also for reasons of economic and environmental sustainability. She notes that the national raw material meets various United Nations Sustainable Development Goals, including employment creation and income generation for vulnerable social groups, lower waste production, and reduced water consumption.

Fernando Pimentel, president of ABIT, believes that the international market is essential to making the Brazilian cashmere supply chain viable since, in tropical countries like Brazil, the demand for the product is limited. “It is a good idea that needs to be developed, establishing partnerships with state governments that want to motivate family-based farming and with companies interested in this market,” he says. One of Souza Coelho’s goals for 2019 is to establish an agreement with a producer of threads and fabrics. “We are in advanced negotiations with three companies.”